Eric and Lara Trump were spotted enjoying a lunch date with his mother Ivana Trump in Manhattan on Wednesday after returning to New York City earlier this month.

The couple dined with Ivana, 72, at the upscale Italian eatery Altesi Ristorante, one of her favorite restaurants on the Upper East Side, before walking her back to her townhouse.

Eric, 37, was the only one who wore a mask when they left the restaurant, with his mother, his wife Lara, and one of their Secret Service agents opting to forgo the protective face covering while strolling through the crowded city streets. 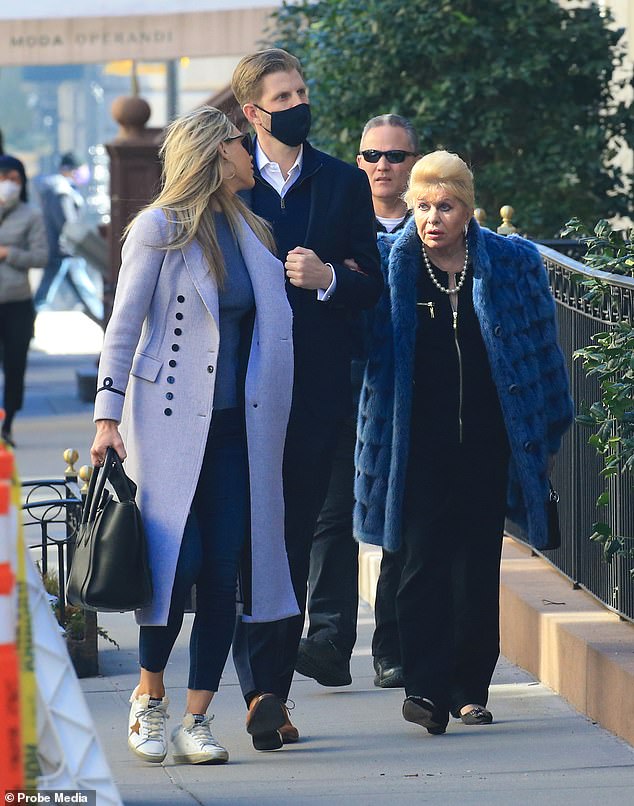 Ivana was dressed to the nines in a flashy blue fur coat, which she wore over a black pantsuit. She topped off the look with a large, silver ball necklace that matched the zipper details on her blazer and black flats.

Her platinum blonde hair was pulled back in her signature beehive with her bangs framing her perfectly made-up face. She sported thick black liner around her eyes and rosy-pink lipstick, her preferred beauty look in recent years.

Ivana’s daughter-in-law Lara, 38, was dressed a bit more casually in a blue ribbed top, cropped skinny jeans with a frayed hem, and Golden Goose’s intentionally distressed shearling sneakers, which retail for an eye-watering $630.

The mother of two kept warm in a lilac wool coat and carried a black leather handbag while strolling down the sidewalk with her husband and mother-in-law.

Lara wore black-frame sunglasses and her large gold hoop earring peeked out from underneath her long blonde hair when it blue in the wind. 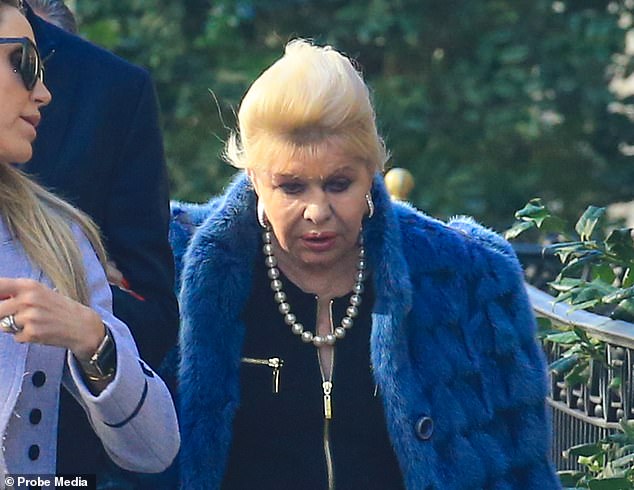 All dressed up: Ivana, 72, donned a lush blue fur coat for the family outing 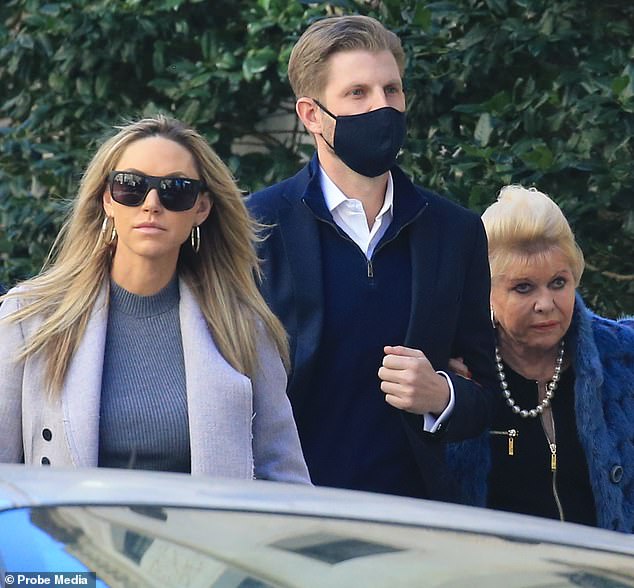 Fun: The family dined at Altesi Ristorante, an upscale Italian eater on the Upper East Side 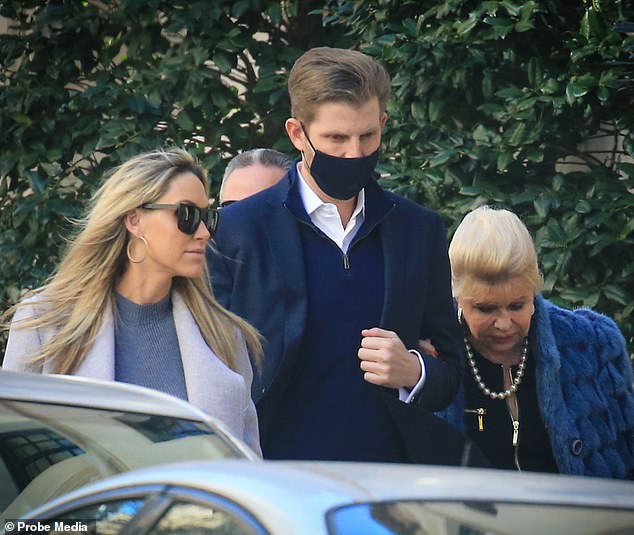 Strolling: Eric, 37, and Lara, 38, walked his mother home after their lunch together 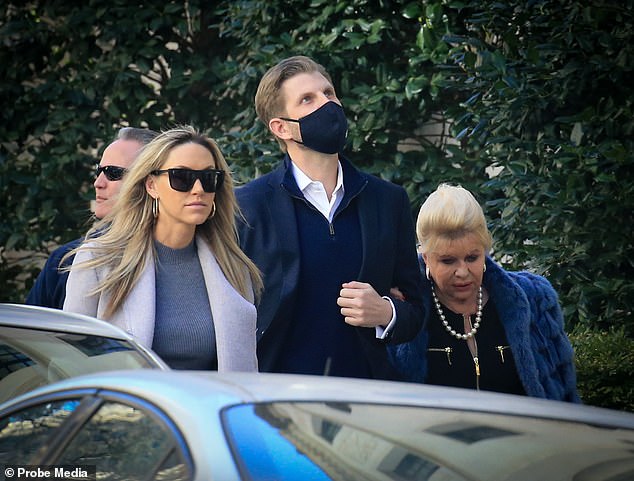 Not exactly safety first: Eric was the only one who wore a face mask when they left the restaurant 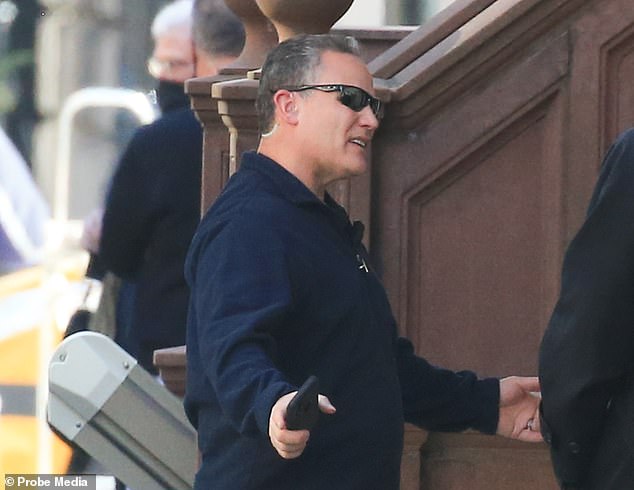 Not blending in: One of the couple’s Secret Service agents also went without a face mask

Eric, meanwhile, sported a navy half-zip sweater over a crisp white button-down. Instead of a winter coat, he had on a blazer that matched his navy dress pants.

Ivana held onto her son’s arm as they walked together, while he carried a paper bag that likely contained her leftovers from their lunch date.

Eric and Lara said a short goodbye to his mother before they walked back to their home in Trump Tower, where their children Luke, three, and Carolina, one, were likely waiting.

The couple was followed by their Secret Service entourage, who trailed them in two SUVs and on foot. Lara and her Secret Service agent passed hundreds of people as they walked down 5th Avenue without masks.

Eric and Lara were seen back in New York City earlier this month on the first day of arguments at his father’s second impeachment trial. 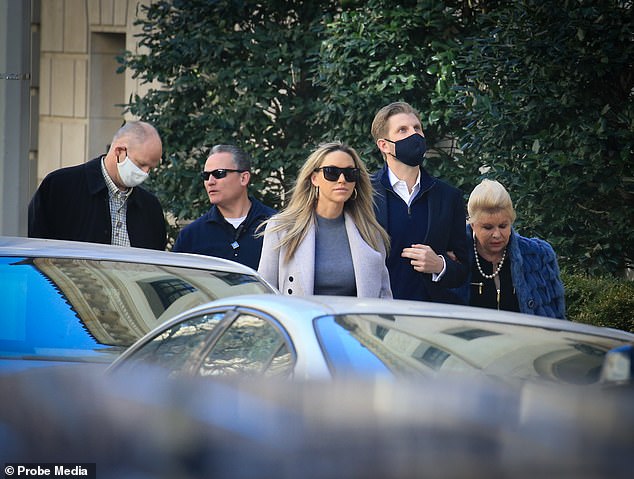 Talking business: Two of their agents chatted behind Eric and Lara as they walked with Ivana 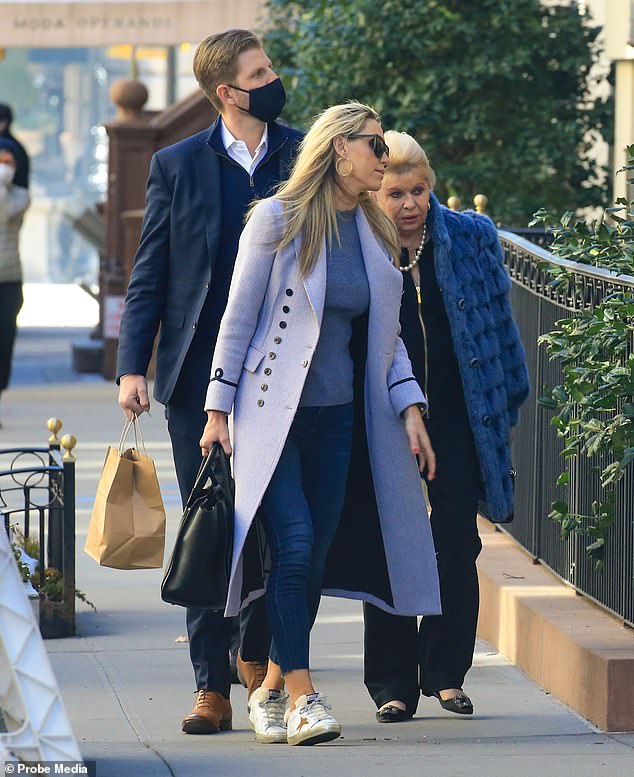 Lunch look: Lara was dressed a bit more casually that Ivana in a blue ribbed top and cropped skinny jeans with a frayed hem 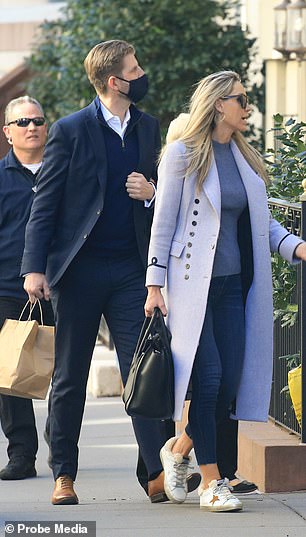 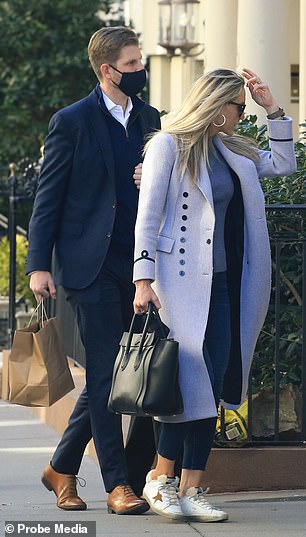 Pricey: Lara had on a pair of Golden Goose’s intentionally distressed shearling sneakers, which retail for an eye-watering $630 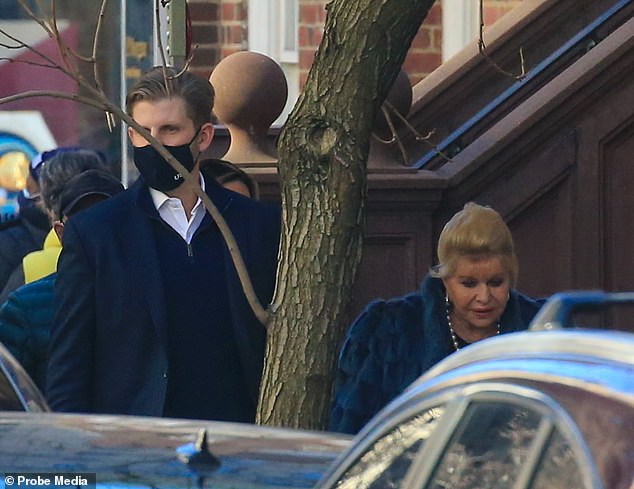 On the go: The family crowded a number of people while strolling through the Upper East Side 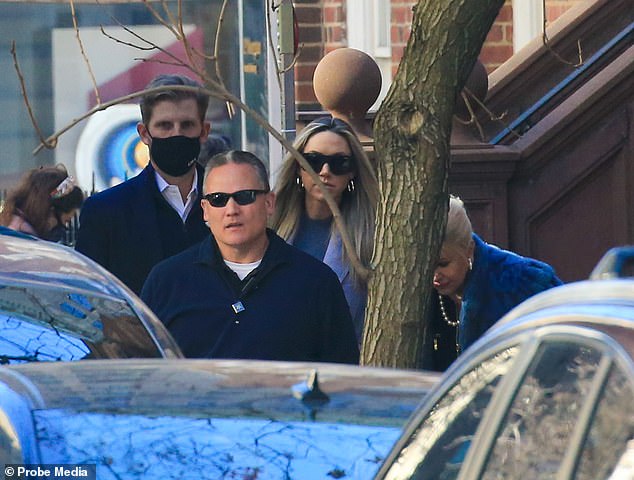 Back into the groove: Eric and Lara returned to New York City earlier this month 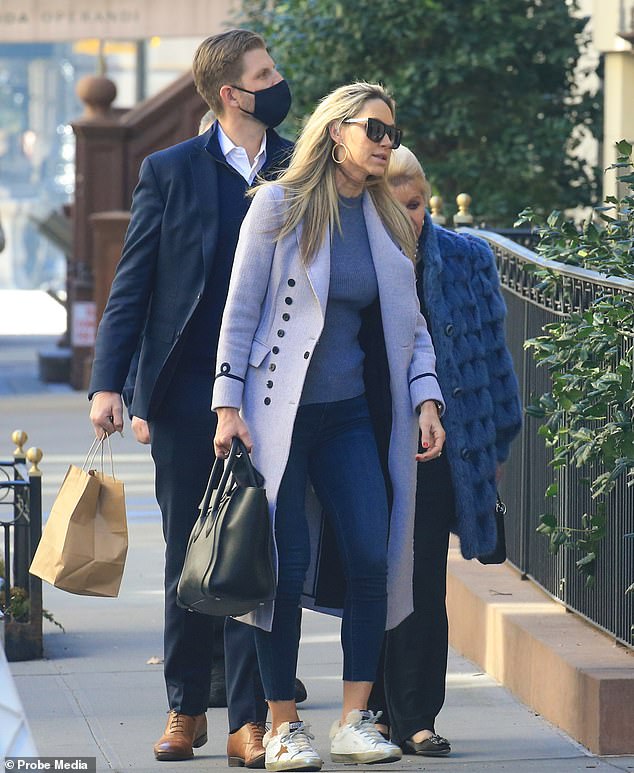 Dutiful son: Ivana held onto Eric most of the walk home, and he carried her leftovers 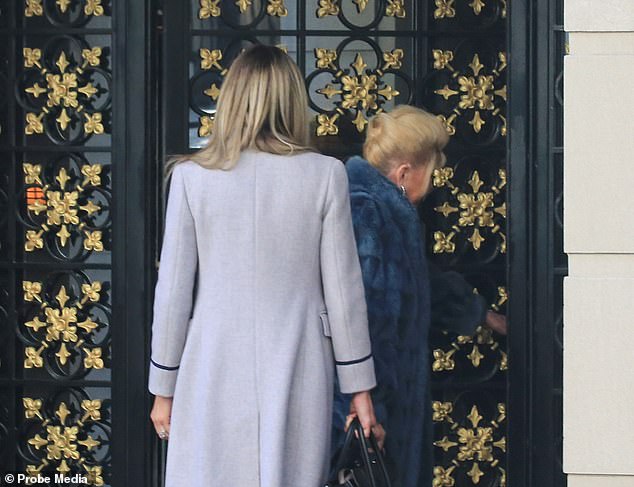 Daughter-in-law duties: Lara helped Ivana to the door off her Upper East Side townhouse 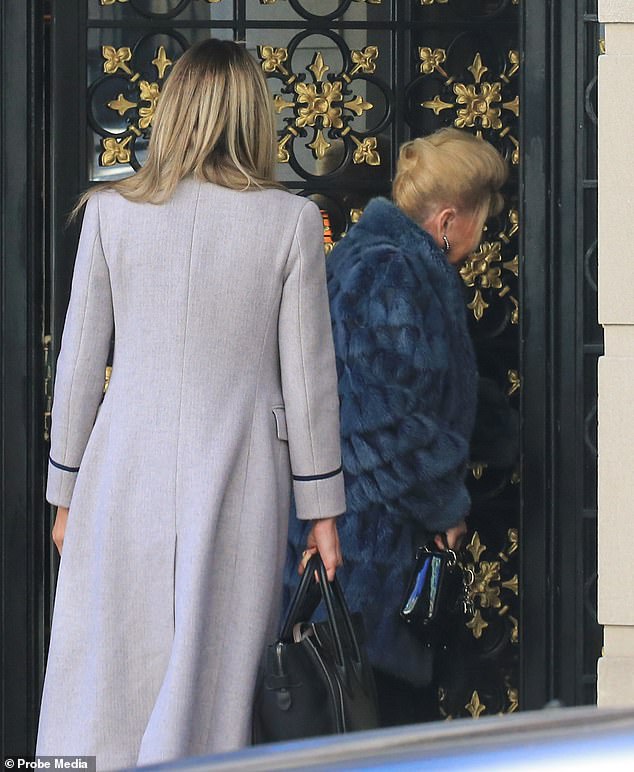 Almost in: Lara watched as Ivana got the keys out of her beloved Lady Dior bag 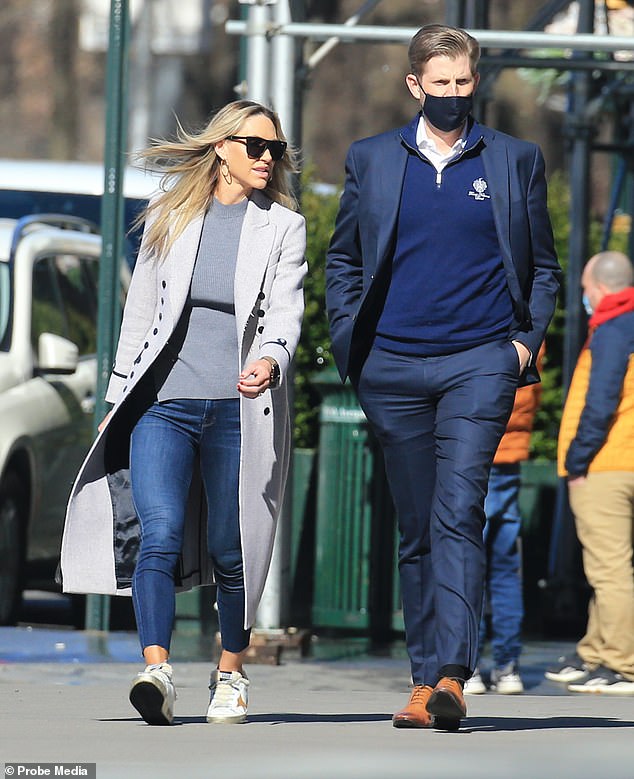 Enjoying the sun: After dropping off Ivana, Eric and Lara walked home together 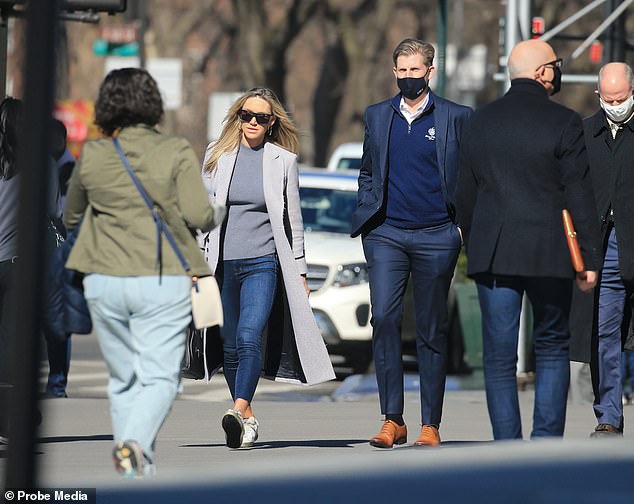 Minding his own business: Eric kept his hands in his pocket as he walked with his wife

Former President Donald Trump was impeached by the House last month for inciting the insurrection but was acquitted at his trial, even though the bipartisan majority voted guilty.

The weekend before they were seen out in the Big Apple, Eric was at Lake Placid with his family to officiate the wedding of two Trump Organization employees at the Whiteface Lodge resort.

In January, following President Trump’s departure from Washington D.C., most of the family decamped to sunny Florida.

Donald and Melania are living at his Mar-a-Lago resort in Palm Beach with their teenage son Barron, while his eldest daughter Ivanka Trump, 39, and her husband Jared Kushner, 40, have relocated to Miami with their three children.

The Kushner family is currently staying in a luxury apartment at Arte Surfside, one of the city’s most sought-after oceanfront buildings. 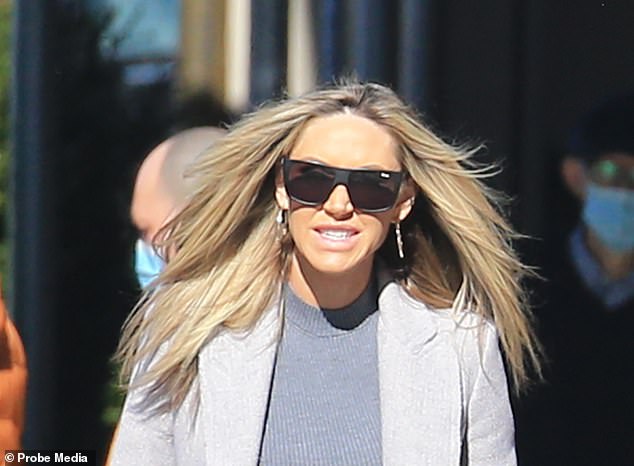 Accessories: Lara had on funky black-frame sunglasses and hoop earrings 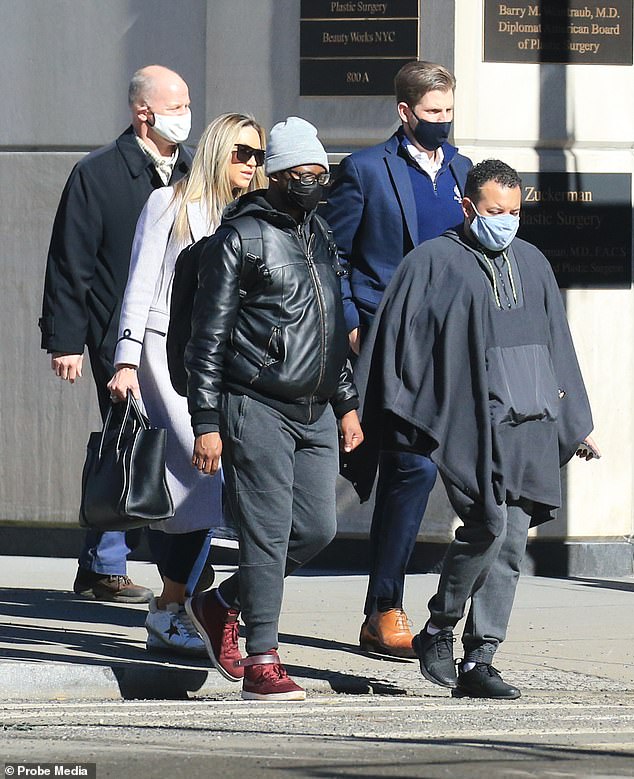 Up close: The couple didn’t maintain their distance when approaching other pedestrians 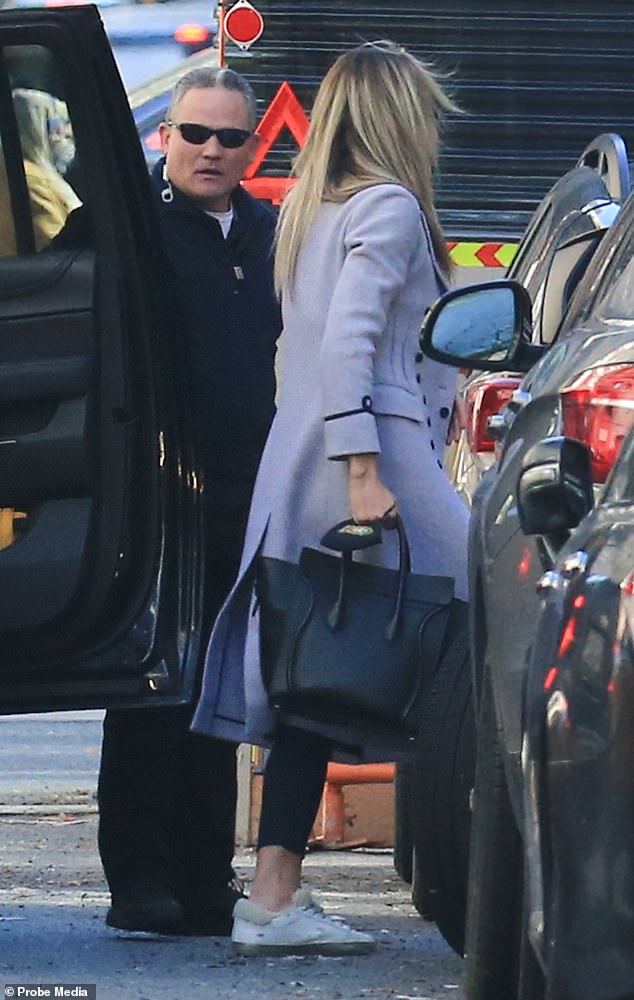 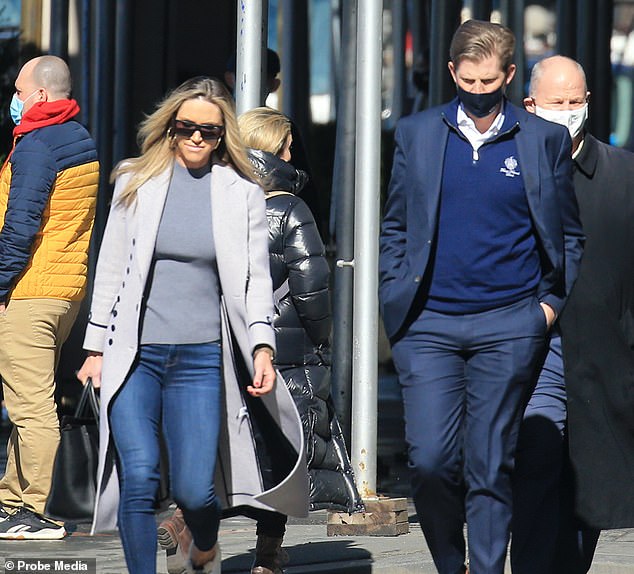 Layers: Eric paired a half-zip sweater and button-down with his navy suit 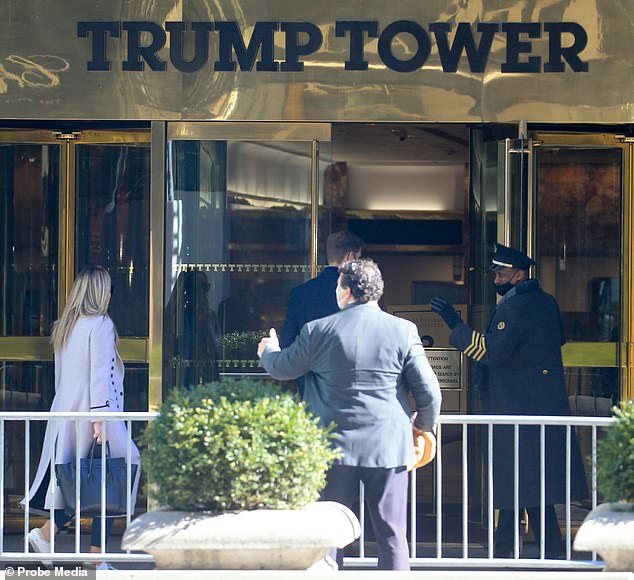 Wait up: Eric beelined for Trump Tower while Lara trailed behind him 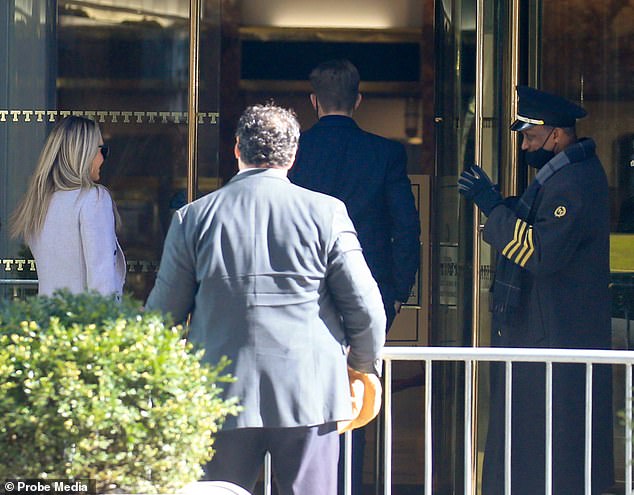 Mystery: It is unknown what is next in store for Eric and Lara; unlike the other Trump siblings, they are not believed to be looking for property in Florida

They are said to be using the large, unfurnished unit as a temporary home while they build a property on a two-acre plot they purchased on Indian Creek Island  — also known as the ‘Billionaire Bunker’ — for $31.8 million late last year.

Tiffany Trump, 27, and her fiance Michael Boulos, 23, have also been living in Miami and are reportedly looking for houses there, while Don Jr. and his girlfriend Kimberly Guilfoyle are said to be moving to Jupiter, Florida.

It is unknown what is next in store for Eric and Lara; unlike the other Trump siblings, they are not believed to be looking for property in the Sunshine State.

The couple has long been based in New York City, where they currently live with their two kids, and it is unclear whether they are planning to try and return to Manhattan life full time.

Many believed Ivanka and Jared would no longer be welcome in the same elite Manhattan social circles they once ran in before her father became president, which was thought to be one of the reasons for their move.

However, Eric and Lara maintained a far more low-key profile while living in the city. They did not relocate to Washington, D.C. as Ivanka and Jared did early on in Trump’s presidency, which may give them a better chance to adjust.