Like father, like son! Eric Trump calls AOC’s squad ‘an absolute clown show’ and says he LOVES his father’s infamous tweet: ‘If you don’t love our country, get out. Leave.’

Eric Trump took a rhetorical axe to ‘the squad’ on Wednesday, telling a television audience that his father’s latest fearsome foursome of antagonists are ‘an absolute clown show’ and he agrees with his father that Americans who aren’t in love with the United States should ‘get out.’

The president has drawn intense criticism and a formal rebuke from the Democratic-controlled House of Representatives for tweeting that Reps. Alexandria Ocasio-Cortez, Ilhan Omar, Ayanna Pressley and Rashida Tlaib should ‘go back where they came from.’

On ‘Fox & Friends,’ Eric called the Democratic Party’s forward-facing standard bearers ‘the most hate-filled group I’ve ever seen before.’

‘I love the tweet,’ the president’s middle son said. ‘If you don’t love our country, get out. Leave.’ 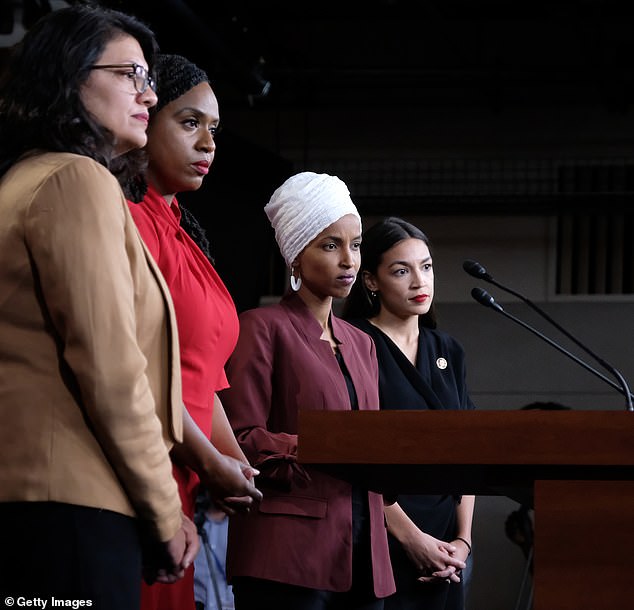 He didn’t directly address the president’s language telling them to ‘go back where they came from.’

But Eric told frustrated Americans to compare their home country with others by visiting them, promising a new level of gratitute for the nation they complain about.

‘If you complain about our country, go to somewhere, go experience somewhere else in the world,’ he said. ‘I’ve seen a lot of the world. We have it so great in America.’

‘I’m not saying America doesn’t have certain problems,’ Eric conceded, but he urged: ‘Go see the conditions around the world, and you’ll be so fortunate you live here. We are blessed to live in this country. And if you’re not happy about it, I like his message. Leave.’

Eric, who is Executive Vice President at The Trump Organization, had harsh words for Ocasio-Cortez and her posse of liberal Democrats. He said their party is consumed with race politics and Republicans will benefit from it.

‘No, of course she’s not racist,’ Eric continued. ‘It’s just a term that they like to use every day. You know, two nights later she’s calling my father [a racist] – I mean, this is what’s happening to the party, and it’s totally feeding into our hand, and I hope they keep on doing it.’

he also ripped into the squad for refusing to condemn an ‘Antifa’ radical group that stormed an ICE facility and swapped out its U.S. flag for a Mexican flag.

And ‘they say anti-Semitic things every single day,’ he claimed.

Omar was pilloried this year for claiming that American politicians who support the Israel lobby do it ‘for the Benjamins,’ a reference to an anti-Semitic trope about moneyed Jews controlling Washington.

She said in a CBS News interview broadcast Wednesday that she has no regrets.