Erik ten Hag was frustrated with his players after his first Premier League game in charge of Manchester United ended with a 2-1 home defeat to Brighton.

German midfielder Pascal Gross scored twice for the Seagulls in the first half, with the Dutchman admitting his team gave ‘two easy balls away’ in the build-up for both goals.

The hosts were only able to get one in response through an own goal by Alexis Mac Allister in the 68th minute.

In his post-match press conference, ten Hag was not pleased with the errors that his team made, and hopes it will be a learning experience for United.

‘We made mistakes on the ball and organisation mistakes in defending,’ ten Hag said. ‘We have to take the lessons and learn quickly from it.

‘Brighton are a decent team, all the compliments, but I look to my team and we should not give two easy goals away.’

The 52-year-old was despondent with the team’s performance, but spotted promising signs in the later stages of the match.

‘Of course definitely a setback and real disappointment,’ ten Hag fumed. ‘I knew from the start it would not be easy.

‘It is clear to see the second half we were better in midfield with [Christian] Eriksen down and [Cristiano] Ronaldo up. We created and [Marcus] Rashford had two good chances, it is a shame we did not score.

‘I am not satisfied, totally not. We lost and it was not necessary. We should do better.’ 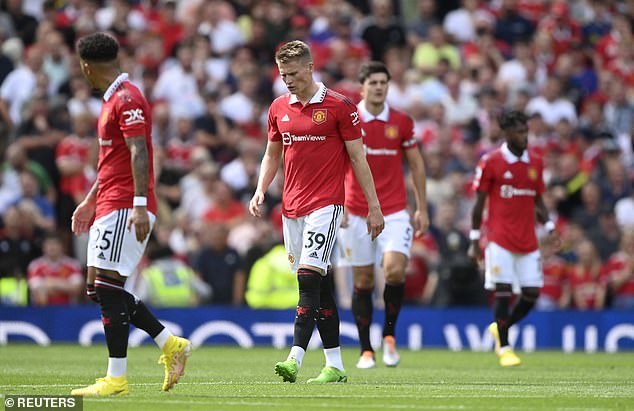 The boss feels no need to sign new United stars, stating the current players ‘could do better’ 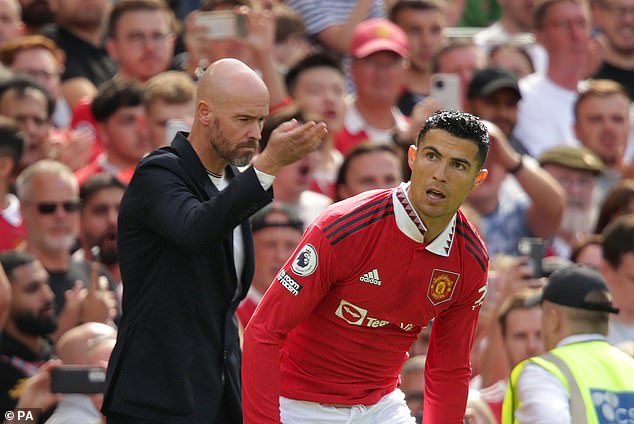 Cristiano Ronaldo started on the bench, but ten Hag praised his impact after his introduction

He doesn’t even think that United need to sign more talent in the transfer window, with the former Ajax coach stating: ‘We could do better with the players we had.’

Ten Hag said he does not know when Anthony Martial will return from a hamstring issue picked up in pre-season, saying ‘we have to wait’.

After falling to defeat against the Seagulls, it is the future where the former centre back is keeping his focus.

‘It is a hell of a job,’ ten Hag told reporters. ‘We have to work really hard, analyse, then move forward.’

United’s next outing on Saturday is a visit to Eriksen’s former club Brentford, who came from two goals behind to draw with Leicester City at the King Power Stadium.