‘Leave and take your flags with you’: Furious EU parliament chair CUTS OFF Nigel Farage during his triumphant last speech to Brussels after 21 years – for waving the Union Flag

Nigel Farage was cut off as he delivered his final speech in the European Parliament this afternoon because he and his Brexit Party MEPs started to wave Union flags.

Parliament vice-president Mairead McGuinness switched off Mr Farage’s microphone as he was finishing his address as she told the party’s MEPs to ‘put your flags away, you are leaving’.

The cheering Brexit Party contingent then proceeded to get up and walk out of the chamber.

The stormy clash took place as MEPs rubberstamped the Brexit divorce deal – the final hurdle which needed to be cleared for the UK to leave the EU at 11pm on January 31.

The hours before the vote saw numerous MEPs break down in tears as Britain was given an emotional send off.

Concluding his remarks, Mr Farage said: ‘I know you are going to miss us. I know you want to ban our national flags but we are going to wave you goodbye and we will look forward in the future to working with you…’

At this point Mr Farage and his party colleagues started to wave Union flags but his microphone was immediately cut off. 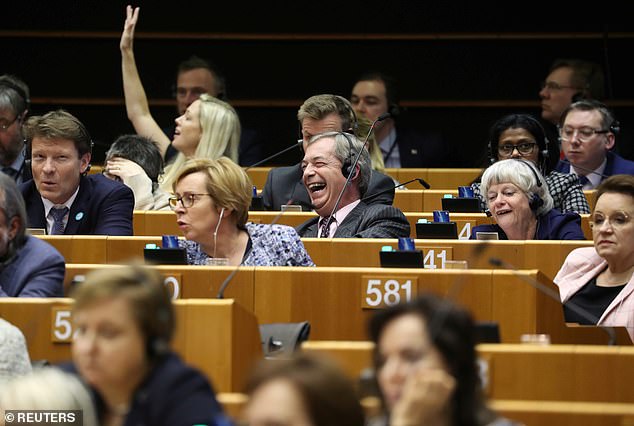 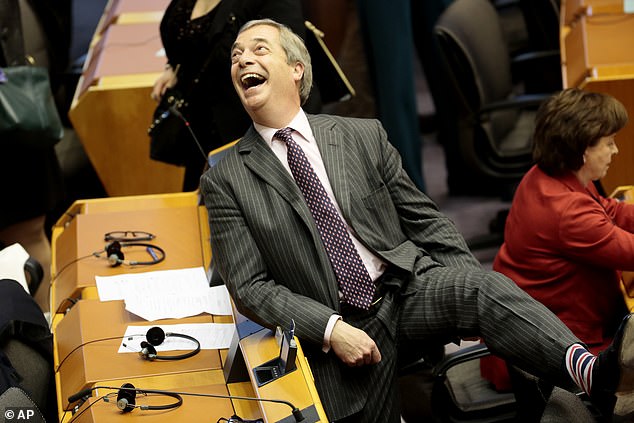 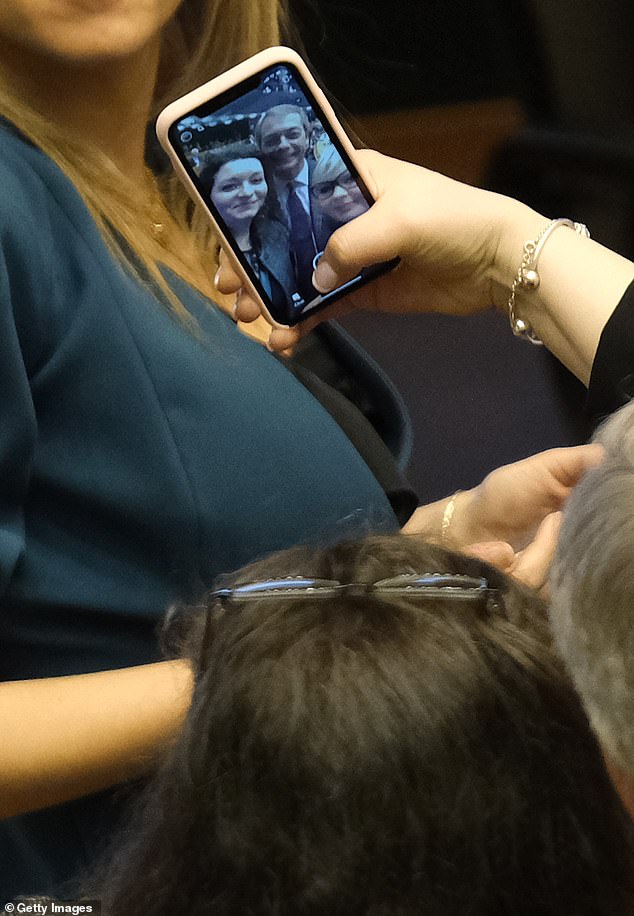 It’s done! MEPs vote for the Brexit deal, paving the way for UK to leave EU on January 31

MEPs broke down in tears today as British politicians sat in the European Parliament for the last time and were given an emotional send off.

European Commission president Ursula Von Der Leyen said ‘we will always love you and we will never be far’ as she bid farewell to the UK contingent ahead of Brexit taking place on Friday.

The British politicians’ last act this evening was to ratifying the Brexit Deal ahead of the UK’s departure on Friday.

After tears, and the lighting of candles at commemorative events in Brussels earlier, there was applause as Brexit Party leader Nigel Farage’s valedictory speech after two decades at the heart of the EU establishment was cut off.

Brexit Party MEPs then started to clap and cheer as Mr Farage could be heard saying: ‘That’s it. It is all over.’

His MEPs then proceeded to give their leader three cheers of appreciation, prompting a further rebuke from the chair.

Ms McGuinness snapped: ‘Please sit down, resume your seats. Put your flags away you are leaving. And take them with you if you are leaving now. Goodbye.’

Mr Farage had used his speech to tell the European Parliament that this was the ‘final chapter, the end of the road’ for the UK and the bloc after a 47 year ‘political experiment that the British frankly have never been very happy with’.

The veteran Eurosceptic, who was first elected to the European Parliament in 1999, said: ‘What happens at 11pm this Friday, January 31 2020, marks the point of no return, once we’ve left we are never coming back and the rest, frankly, is detail.

‘We are going, we will be gone and that should be the summit of my own political ambitions. 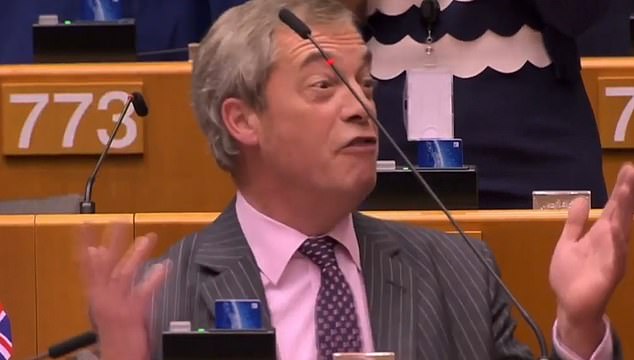 Mr Farage initially sat down after he was cut off and he could be heard saying: ‘That’s it. It is all over.’ 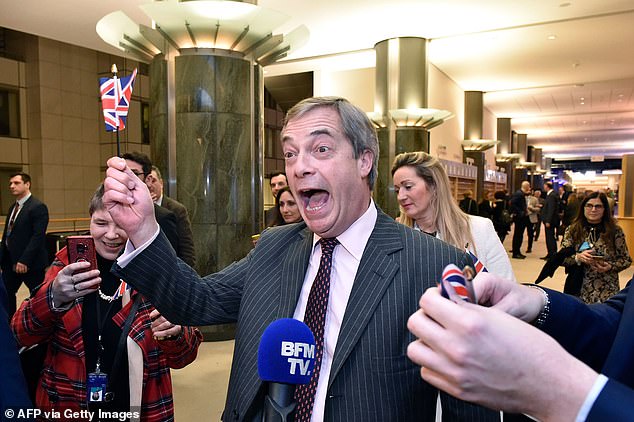 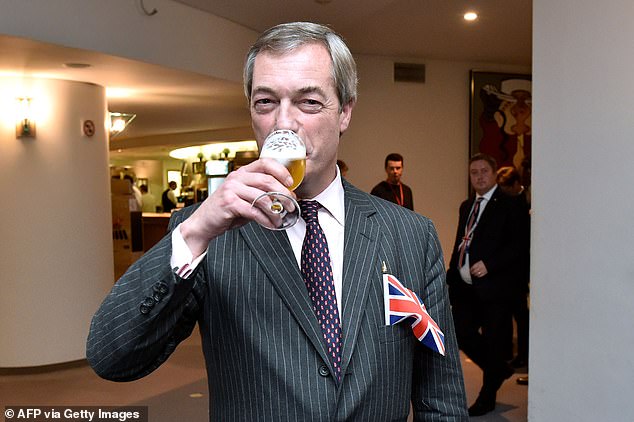 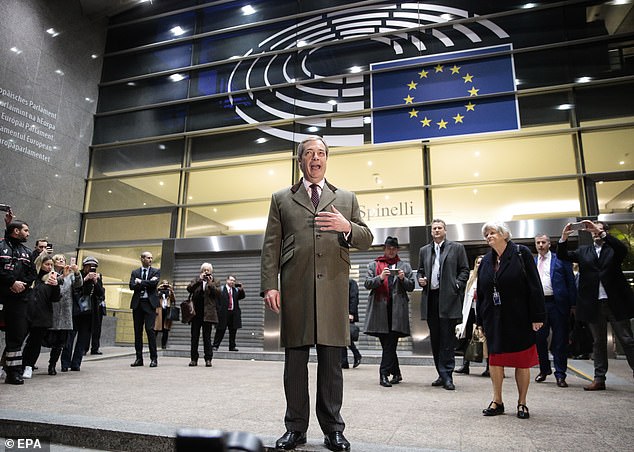 ‘I walked in here as I have said before, you all thought it was terribly funny, you stopped laughing in 2016.’

Mr Farage hit out at the bloc as he said it had a history of making people vote on an issue a second time if it did not like the result of the first ballot.

But he said the ‘British are too big to bully, thank goodness’, adding: ‘We love Europe. We just hate the European Union. I am hoping this begins the end of this project.’

Mr Farage suggested that the ‘anti-democratic’ bloc was not in tune with what modern voters are looking for.

‘You may loathe populism but I will tell you a funny thing, it is becoming very popular,’ he said.