The 12 European clubs plotting to form a breakaway European Super League are planning legal action to oppose moves by UEFA to stop them.

The rebel group, which includes Manchester United, Liverpool, Arsenal, Manchester City, Chelsea and Tottenham have been warned by UEFA that severe action would be taken against them if they proceed with their plans.

This could include being barred from all domestic and European competitions, as well as players banned from representing their countries.

But it has now emerged that the breakaway clubs, which also include, Barcelona, Real Madrid and Juventus, are taking their own legal action, according to a letter sent to FIFA and UEFA by the so-called ‘dirty dozen’.

It warns that funding has already been secured for the competition to the tune of £3.46bn – as revealed yesterday by Sportsmail from financiers JP Morgan.

It adds that UEFA’s initial response – in which they stated they would use ‘all measures’ possible to block a ‘cynical project’ – has ‘compelled us to take protective steps to secure ourselves against such an adverse reaction, which would not only jeopardise the funding commitment but, significantly, would be unlawful’.

The letter was sent by the group of English, Spanish and Italian clubs to FIFA President Gianni Infantino and UEFA counterpart Aleksander Ceferin.

‘We are concerned that FIFA and UEFA may respond to this invitation letter by seeking to take punitive measures to exclude any participating club or player from their respective competitions,’ the Super League clubs wrote to Infantino and Ceferin

Aleksander Ceferin, president of UEFA,will chair the meeting when a decision is made

‘Your formal statement does, however, compel us to take protective steps to secure ourselves against such an adverse reaction, which would not only jeopardize the funding commitment under the Grant but, significantly, would be unlawful. For this reason, SLCo (Super League Company) has filed a motion before the relevant courts in order to ensure the seamless establishment and operation of the Competition in accordance with applicable laws.’

The courts were not named.

‘It is our duty, as SLCo’s board members, to ensure that all reasonable actions available to protect the interests of the Competition and our stakeholders are duly taken, given the irreparable damage that would be suffered if, for any reason, we were deprived of the opportunity to form promptly the Competition and distribute the proceeds of the Grant,’ the Super League letter continued.

The new competition will be financed by JP Morgan and include 20 clubs, with 15 ‘founder members’ guaranteed their place and another five would have to qualify. There would be two groups of 10, with the top four from each group going through to two-legged quarter-finals, semi-finals and a one-legged final. 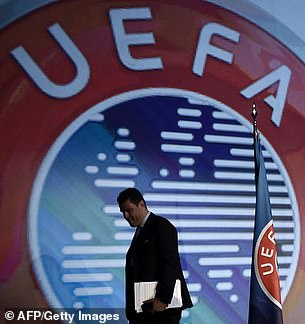 FIFA and UEFA have threatened clubs and players who participate in any European Super League with a ban from their competitions, but lawyers are sceptical about that claim

The founder members of the Super League would be offered up to 350 million euros (£310 million) each to join.

Today, UEFA’s executive committee is due to meet to agree it’s own plans for the reformed Champions League, which is set to increase from 32 to 36 teams and have an additional 100 matches.

Fans, politicians, governing bodies and some of football’s most famous names joined in condemning the staggering development, which was the brainchild of Real Madrid president Florentino Perez and was officially announced in a statement late on Sunday night.