An ex-policeman has been jailed over a £336,000 cannabis factory on his farm that he protected with a ‘ring of steel’ of rifles, knives and a crossbow.

David Allen, 68, who also spent 24 years in the Army, serving in Northern Ireland, Bosnia, the Gulf and Afghanistan, began growing the drugs in his retirement on his smallholding by a primary school in Penrith, Cumbria.

The farm was guarded by a cache of ‘strategically positioned’ weapons, ready to protect his illegal enterprise.

The ex-copper, who served in Northumbria from 1993 and 1997, was caught when officers smelt cannabis and searched his premises in July 2020.

Allen – hailed a national ‘hero’ by his lawyer for his Army career – admitted producing cannabis and was jailed for three years and seven months.

Prosecutor Alaric Walmsley said a detective described the operation as ‘one of the most carefully constructed and sophisticated set-ups’ ever seen.

The plants were nearing full maturity, and contained within a fully insulated room with sophisticated timed lamps, heaters and ventilation system.

There was also a substantial drying area including a large, insulated tent, drying racks and vacuum-packing machinery.

Mr Walmsley added: ‘A search of the defendant’s farmhouse revealed further equipment and packaging for the cannabis.

‘Notes and manuals of how to grow cannabis and operate the machinery; cash; and weapons – knives, a crossbow and air rifles in strategic positions ready to protect the cannabis farm if required.’

Plain-clothed officers visiting the property were confronted by Allen who initially tried to fob them off.

Mr Walmsley said: ‘The officers identified themselves and asked the defendant if he knew anything about a cannabis grow in the area.

‘He said that he did not, and said something like ‘I wouldn’t know where to start with that’.

‘He then started talking about his previous careers in the military and in the police force.

‘Due to the way he was talking, police suspected he was trying to change the subject and distract them.’ 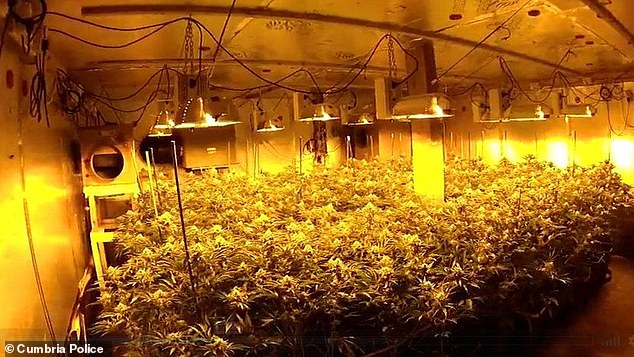 While under investigation, Allen made ‘arrangements to leave the country’.

He let slip to an estate agent in November he was ‘packing’ and ‘off to retire in the sunshine’ in Asia and may not be coming back.

A financial probe of his finances identified ‘unexplained cash deposits totalling over £425,000, together with regular transfers of money to the Philippines’.

Two passports handed over by Allen to police featured different dates of birth.

Michael Davies, defending, stressed his client – through his army service – was a ‘national hero’ who had ‘stooped to commit this offence’.

Mr Davies said that none of the legally-held weapons were loaded and that Allen began using cannabis to self-medicate for a bad back.

He added the ‘real story’ was ‘a soldier who served his country, so well and for so long at such personal cost, has stooped to commit this offence.’