Facebook needs to know ‘what side of the law they are on’, warns UN

Facebook should move more ‘proactively’ to address hate speech on its platform, the United Nations human rights chief has cautioned.

He warned that the social network needs to work out ‘what side of the law they are on’.

The appeal follows a decision by Facebook this week to ban Myanmar’s army chief as well as other top military brass linked to a possible ‘genocide’ against Rohingya Muslims following a recent investigation by the UN.

The social network is the prime source of news and information for many in Myanmar, but has also been used as a platform for the army and Buddhist hardliners to spread hate speech against the Rohingya and other minorities.

These individuals aired their support for the military’s bloody ‘clearance operations’ last year that forced some 700,000 Rohingya over the border into Bangladesh in posts shared widely across Facebook.

The UN human rights chief Zeid Ra’ad Al Hussein said in early meetings with Facebook he did not think executives ‘were taking it seriously’.

Al Hussein also urged the social network not to wait until a full-blown crisis to erupt before it decides to take action against hate speech.

‘We felt early on very uncomfortable with what we were seeing in Myanmar, (but) in the early meetings that we had with Facebook, I didn’t think they were taking it seriously,’ said Zeid, who is due to step down from his post as UN High Commissioner for Human Rights at the end of the week.

Facebook’s ban included two official pages dedicated to the army’s commander-in-chief, Senior General Min Aung Hlaing, which were used as the military’s primary outlet for information, especially around the crisis in the western state of Rakhine.

Al Hussein also warned there could easily be other cases ‘where Facebook is the dominant medium in a country where you see a deterioration of human rights conditions and then their role would be brought into question.’

He cautioned the California-based company should be ‘careful’, since it risked being subpoenaed in possible future trials ‘of those accused of the worst crimes.’

‘We’ve seen from the jurisprudence of the past that if you’ve enabled, you’ve abetted, you’ve been an accessory,’ Zeid said, stressing that while he was not accusing Facebook of that, ‘they have to be sure that they know where they are and what side of the law they are on.’

The Jordanian national, who is set to be succeeded by former Chilean president Michelle Bachelet, urged Facebook not to wait until a full-blown crisis erupts before it begins to take action against hate speech.

‘They should be thinking proactively about what steps they will take to mitigate that,’ he said.

Zeid meanwhile warned of going too far in the opposite direction, cautioning that ‘there is also another danger (of being) overregulated.’ 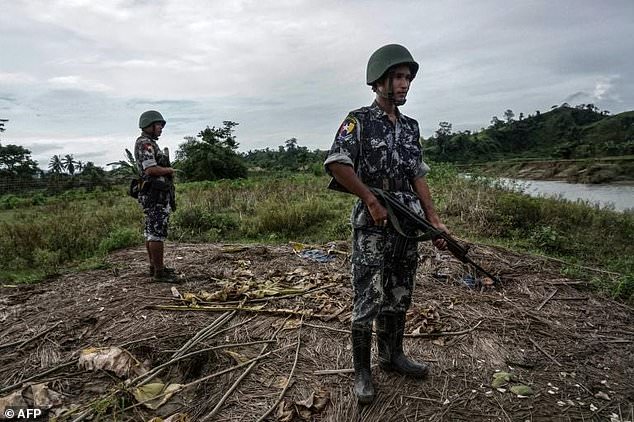 The northern wedge of Rakhine, the Myanmar state closest to Bangladesh, has been in lockdown since October 2016 deadly attacks by militants on border posts sparked a military response that left scores dead and forced tens of thousands to flee

HOW DID FACEBOOK CONTRIBUTE TO RIOTS IN SRI LANKA AND MYANMAR?

What happened in Sri Lanka?

Inter-religious violence in Sri Lanka, which left three dead back in March 2018, was in-part blamed on the spread of false information shared across Facebook.

The government blocked popular social media networks in an attempt to stop the violence from spreading, and thousands of police and soldiers spread out across the worst-hit areas.

The police also ordered a curfew across much of the region for a third straight day, trying to calm the situation.

What happened in Myanmar?

People and groups in Myanmar also experienced real-world physical violence as a consequence of similar rumours spread on Facebook.

Facebook use has grown exponentially in Myanmar since a quasi-civilian government opened up the telecoms sector in 2013, making it easier for people to access the internet in the largely Buddhist country.

Nearly 700,000 Rohingya have fled to Bangladesh since last August following a military crackdown in Rakhine state that has been likened to ethnic cleansing by the US and the UN, but which has been applauded by Myanmar nationalists online.

Back in February, Wirathu, a prominent face of Myanmar’s Buddhist ultra-nationalist movement, had amassed hundreds of thousands of followers on Facebook.

His tirades have been blamed for stoking sectarian violence, which have plagued Myanmar’s transition to democracy.

His page was removed in February.

He pointed to recent comments by the US President Donald Trump, who has accused technology companies including Facebook, Google and Twitter of bias against him, slamming what he called ‘rigged’ internet search results.

Trump offered no details on what – if any – actions he might take on the issue, however a top White House aide suggested the administration may look at some type of regulation in response to the president’s complaints.

Zeid insisted that instead of more government regulations, platforms’ actions must ‘be regulated by (international) human rights law.’

This is not the first time the UN rights chief has criticised Trump.

He has repeatedly warned that the US president’s relentless attacks on the media are ‘dangerous’.

On Wednesday, Zeid said Trump’s recent statements ‘have been very worrisome to me,’ reiterating his warning that the president’s words could trigger violence against journalists.

‘All of us would be horrified, but perhaps not shocked if we heard of a journalist that was attacked and severely beaten for example at one of the rallies,’ he said, stressing that if that happens ‘the president would bear some responsibility.’

‘As the campaigning seasons heat up, whether it be for the midterm elections or the presidential elections to come, the conduct of the president should be under very careful scrutiny by the international community and by this office,’ Zeid said.