Facebook says it will block anti-quarantine protesters from using its platform to organize in-person demonstrations and gatherings, at the request of state governments.

‘Unless government prohibits the event during this time, we allow it to be organized on Facebook. For this same reason, events that defy government’s guidance on social distancing aren’t allowed on Facebook,’ a spokesperson said on the tech giant’s policy in the midst of the coronavirus pandemic.

The social network said it has already removed protest messages in California, New Jersey and Nebraska at the urging of state government who said the events violated stay-at-home owners, a spokesperson said to Politico.

However, many pages still exist and are planning protests.

On Monday protesters swarmed the state capitol building in Harrisburg, Pennsylvania in a rally that was organized on Facebook group ‘Pennsylvanians Against Excessive Quarantine’, as the state claims it never heard from Facebook in regards to its new policy.

Facebook says it will block anti-quarantine protesters from using its platform to organize in-person demonstrations and gatherings, at the request of state governments 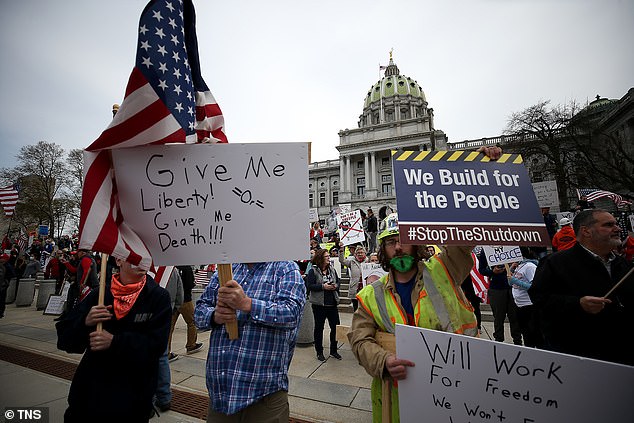 However, protests are still being organized on Facebook. A massive protest took place in Harrisburg, Pennsylvania on Monday afternoon that was organized on the Facebook group ‘Pennsylvanians against Excessive Quarantine Orders’ 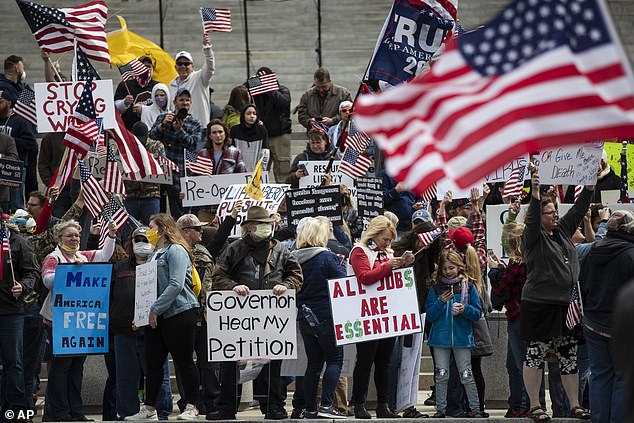 A representative from Pennsylvania’s Department of General Services said the state has not heard from Facebook in regards to shutting down Facebook-organized protests. Demonstrators pictured ignoring social distancing rules as they defy Gov. Tom Wolf’s lockdown on the steps of the Harrisburg, Pennsylvania state capitol building Monday 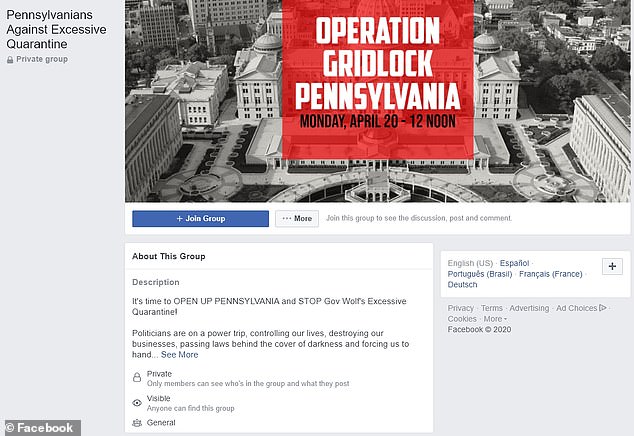 Monday’s Pennsylvania protest was organized in the Facebook Group ‘Pennsylvanians Against Excessive Quarantine’ organized by Ohio gun activist Christopher Dorr, meaning Facebook did not shut the group or page down. That page has over 65,000 members

Facebook said it’s currently attempting to get information from New York, Wisconsin, Ohio and Pennsylvania on protests that would possibly break social distancing guidelines, according to the National Review.
A representative from Pennsylvania’s Department of General Services said to Fox Business that the state has not heard from Facebook in regards to protests.

The Pennsylvania protest was organized online by Ohio gun activist Christopher Dorr and his anti-lockdown Facebook group boasts over 65,000 members. He along with his far-right, gun activist brothers Ben and Aaron Dorr run at least four state anti-lockdown pages, it was revealed Sunday.

In those pages, they rally for the public to protest against state stay-at-home orders.

‘It’s going insane, quite frankly,’ Dorr from Pennsylvania’s statehouse Monday afternoon to the Philadelphia Inquirer as protesters swarmed the state capitol building waving Trump 2020 flags and waving signs that said ‘Give me liberty or give me death’.

All the pages had similar description pages saying: ‘Politicians are on a power trip, controlling our lives, destroying our businesses, passing laws behind the cover of darkness and forcing us to hand over our freedoms.’ 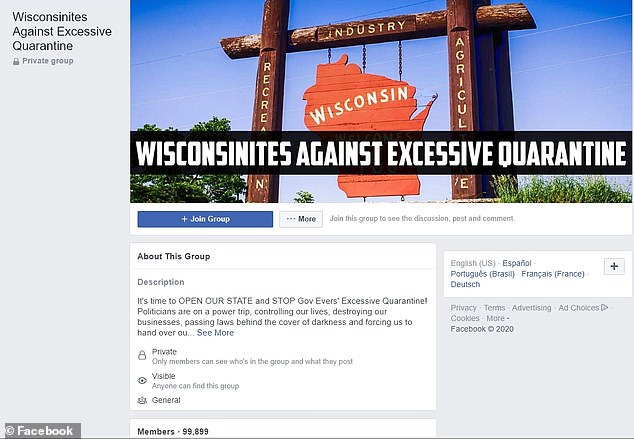 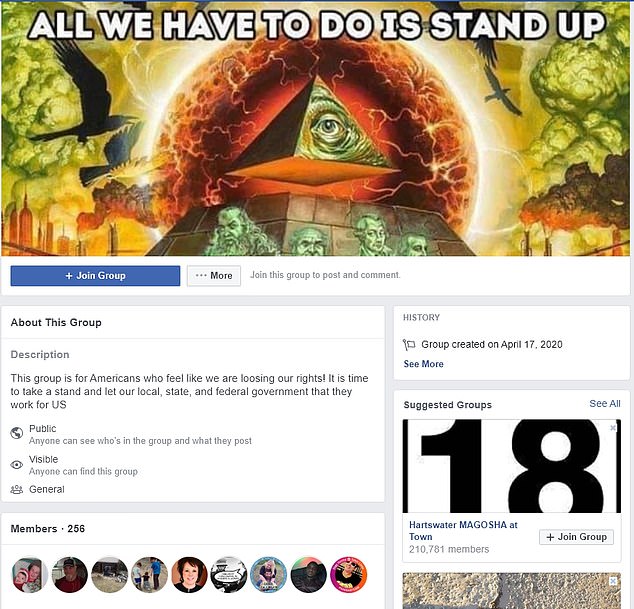 This Facebook page entitled ‘Americans Against Excessive Quarantine Orders’ has over 200 members and is designed for members to ‘take a stand’ and let ‘local, state and federal government know they ‘work for US’ 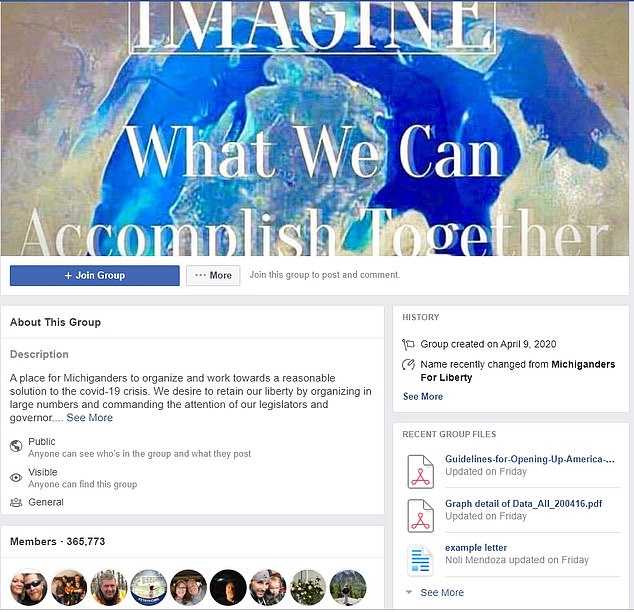 This page entitled Michiganders For Liberty has over 365,000 members of locals who stand against lockdown orders

One of their pages entitled ‘Wisconsinites Against Excessive Quarantine’ was created on Wednesday and has over 99,000 members, and seeks to host a drive-in rally at the capital next Friday with hundreds of group members pledging to participate.

Such a gathering would defy Wisconsin’s stay-at-home orders which Gov. Tony Evers extended last week through May 26.

This week a slew of states have taken to the streets and gathered in state capitals to resist orders to close nonessential businesses and for constituents to practice social distancing and stay at home.

Last week President Donald Trump fueled the fury over the lockdown orders by tweeting a rally call to ‘liberate’ Michigan, Virginia and Minnesota. 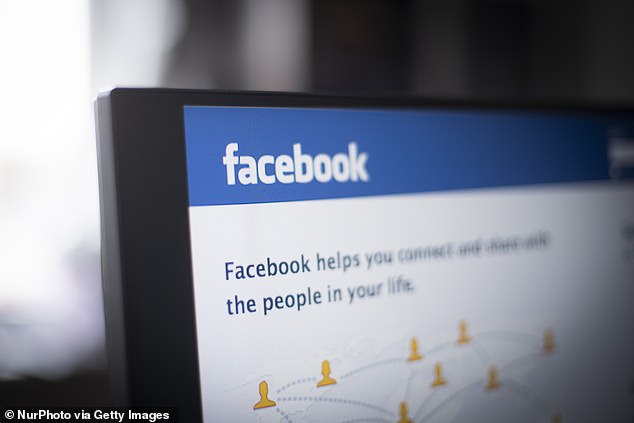 However, some governors say they haven’t heard from states yet in regard to shutting down protest pages and events posted on Facebook

New Jersey’s governor’s office said it did consult with Facebook on the issue but preferred posts not be removed.

‘The Governor’s Office did not ask Facebook to remove pages or posts for events promoting lifting the provisions of the Governor’s stay-at-home order. Please contact Facebook for more information on why they made the decision to remove these posts,’ their office said.

A spokesperson for the Nebraska Gov. Pete Ricketts said Facebook did not ask to shut down any protest event pages.

‘The Governor’s Office is not aware of any Facebook events regarding COVID-19 protests, and has not requested Facebook to pull any events down,’ a spokesperson said.

‘We do classify that as harmful misinformation and we take that down,’ Zuckerberg said in an ABC interview.

‘At the same time, it’s important that people can debate policies so there’s a line on this, you know, more than normal political discourse. I think a lot of the stuff that people are saying that is false around a health emergency like this can be classified as harmful misinformation.’