Facts on the nature of a tsunami

Facts on the nature of a tsunami

A once-exotic word that has now entered the everyday lexicon, a tsunami refers to a shock of water that spreads through the sea, usually after a sub-sea floor quake.

A section of seabed is thrust up or driven down by violent movement of the Earth’s crust.

The rift displaces vast quantities of water that move as waves, able to cover enormous distances, sometimes at the speed of a jet plane.

A 7.5 magnitude quake off the Indonesian island of Sulawesi on Friday generated a tsunami as high as 1.5 metres (five feet) that slammed into Palu, a city of 350,000 people.

Dramatic video footage filmed from the top floor of a parking ramp in Palu, nearly 80 kilometres (50 miles) from the quake’s epicentre, showed waves of water bring down several buildings and inundating a large mosque.

The word “tsunami” comes from the Japanese words for “harbour” and “wave”. 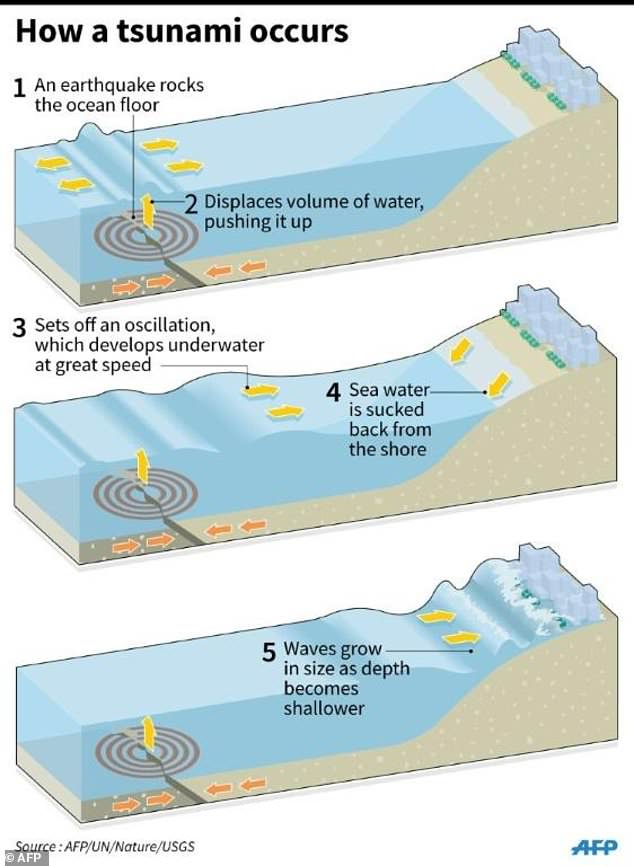 How a tsunami occurs

At their point of generation, tsunamis have a relatively small wave height, with peaks far apart.

As the waves approach the shore they are compressed by the shelving of the sea floor, reducing the distance between the peaks and vastly increasing the height.

To those on the shore, the first sign of something amiss can be the retreat of the sea, which is followed by the arrival of large waves.

“The sea was driven back, and its waters flowed away to such an extent that the deep seabed was laid bare and many kinds of sea creatures could be seen,” wrote Roman historian Ammianus Marcellus, awed at a tsunami that struck the then-thriving port of Alexandria in 365 AD. 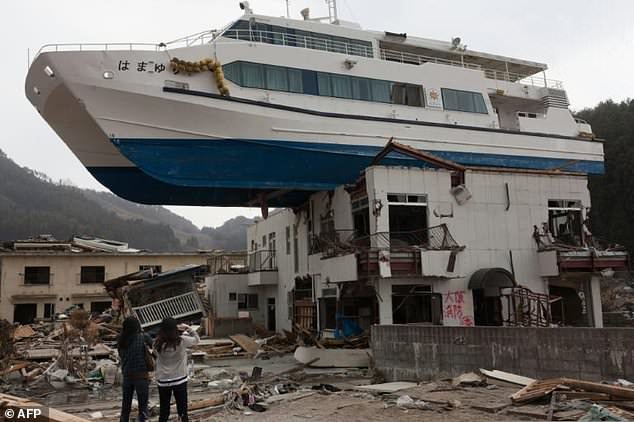 An earthquake can displace vast quantities of water that moves as waves, able to cover enormous distances over open water — carrying boats with it, as it did in Japan in 2011

“Huge masses of water flowed back when least expected, and now overwhelmed and killed many thousands of people…. Some great ships were hurled by the fury of the waves onto the rooftops, and others were thrown up to two miles (three kilometres) from the shore.”

Several factors determine the height and destructiveness of a tsunami.

They include the size of the quake, the volume of displaced water, the topography of the sea floor as the waves race to the coast and whether there are natural obstacles that dampen the shock.

Destruction of protective mangroves and coral reefs and the building of homes or hotels on exposed beaches are fingered as leading causes of high death tolls from tsunamis.

Large quakes are the main drivers of tsunamis, but the phenomenon can also be sparked by other cataclysmic events, such as volcanic eruptions and even landslides. 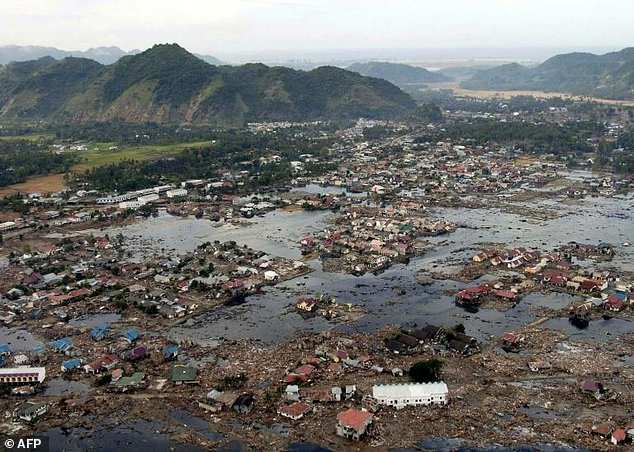 Coastal settlements can be ruined by tsunamis, as happened across a huge area of Asia after the December 2004 disaster, including in Sumatra

In 1883, a volcano shattered the Pacific island of Krakatoa, causing a blast so loud that it could be heard 4,500 kilometres away, followed by a tsunami that killed some 30,000 people.

The tsunami of December 2004 in the Indian Ocean was caused by a monstrous 9.1 magnitude earthquake off the Indonesian island of Sumatra.

It released energy equivalent to 23,000 of the atomic bombs dropped on Hiroshima, according to the US Geological Survey (USGS). Some 220,000 people in 11 nations were killed, many of them thousands of kilometres from the epicentre.

The Pacific Ocean is particularly prone to earthquakes and therefore to tsunamis.

But research has found that, over the millennia, tsunamis have occurred in many parts of the world, including the Atlantic and Mediterranean. A global monitoring network, overseen by the UN, has been set in place to alert areas at risk.