Television presenter Holly Willoughby has been used by a website to flog their diet pills after they falsely claimed she used their products.

Photographs of the star and her fake quotes were used to promote supplements on a website called Cutting Edge Salon, believed to be based in the US.

The Sun Online reports that the fake quotes suggest that Holly’s family ‘hardly recognise her’ following her new ‘cleanse’.

Her fake quotes read: ‘I was so excited to tell my family and friends about my new “cleanse” and now they can hardly recognise me!

‘All I have done is taken this simple ingredient for a couple of weeks and I am thrilled at the results.’

The website also wrongly stated that she left The Voice five years ago because she was not ‘fitting’ for her presenting role.

Other fake quotes went on: ‘I knew I was overweight then, but kicked off the show because of it?! It gave me the motivation to get the perfect revenge.’ 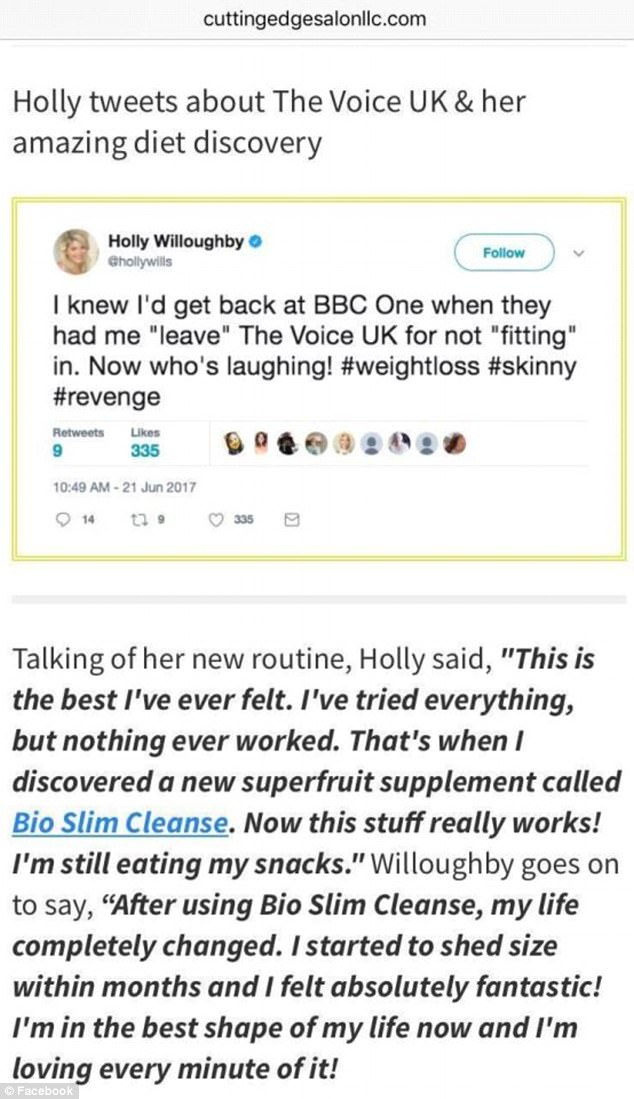 The website, based in the US, even made up a tweet from the 37-year-old mother-of-three to promote their products

But it seems the This Morning presenter did not tweet on that day.

The message read: ‘I knew I’d get back at BBC One when they have me ‘leave’ The Voice UK for not ‘fitting’ in. Now who’s laughing! #weightloss #skinny #revenge.’

Her fake quotes about the product continued: ‘This is the best I’ve ever felt. I’ve tried everything but nothing ever worked.

‘After using Bio Slim Cleanse, my life has completely changed. I started to shed size within months and I felt absolutely fantastic!’