A mystery illness that has struck down police dogs across the country has begun to affect family pets.

The Herald Sun reported that as of Saturday at least three pet dogs had contracted the disease in addition to nine police animals, one of which has died.

People are being warned to keep an eye on their family pets after at least three have come down with the mystery illness that killed a police dog, according to the Herald Sun

Symptoms of the illness can include bad breath, coughing, extreme weight-loss and more breathing noises.

Nine-year-old Labradoodle Stan has lost almost five kilograms since being diagnosed with megaesophagus and has to rely on intravenous drips for fluids.

Tests are being done to see if this illness is linked to a dog food brand.

Stan’s sitter, Jamie Faulkner, is distressed over what is happening to the dog.

He’s even built a special chair to hold Stan so he can try to digest his food.

‘Try and keep him in there for half an hour til’ it you know, half digests, and then he comes out and he’s sick again. It’s pretty shocking,’ Mr Faulkner told 7 News.

Laura and Aaron O’Toole, Stan’s owners, told the Sunday Herald Sun: ‘[The vet] pretty much told us that there won’t be a good outcome.’

Pet owners are urged to not give Advanced Dermocare dry dog food range to their pets due to concerns about megaesophagus, which has struck down nine Victoria Police squad dogs.

It has been taken off the shelves as part of a major product recall.

The incurable condition causes the animals’ throats to painfully close up and has resulted in the death in at least one Victoria Police dog.

Another two are expected to be euthanised. 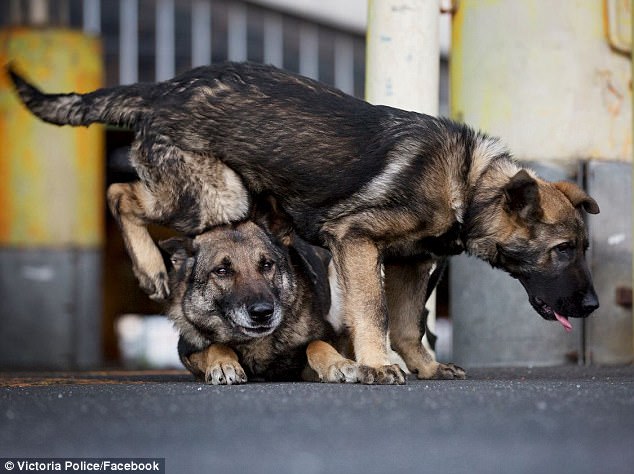 Victoria Police’s Dog Squad has been struck down with megaesophagus, which causes the animals’ throats to painfully close up, resulting in one dog being put down and another two expected to be euthanised 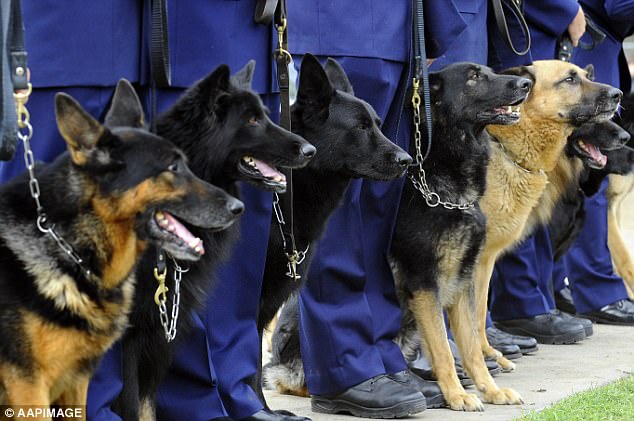 Australian dog food brands used by police handlers are now under heavy scrutiny and specialist veterinarians are looking at the Advance Dermocare range as one possible cause of the illness, the Herald Sun reports.

‘We advise dog owners who have purchased this product to return them to the place of purchase for a full refund,’ the company stated on its website.

‘These bags will have been purchased from specialty retailers and veterinarians. No other Advance products or varieties are affected. The health and wellbeing of Australian pets is our number one priority, so we were deeply concerned to learn that a number of dogs have been affected by megaoesophagus – a condition that is generally not associated with food.’

The company says it has run ‘hundreds of tests’ on its dog food range and has found no link between the condition and the product.

‘Regardless, we are voluntarily recalling these products as a precaution while we work to get to the bottom of the issue as soon as we can,’ the company stated on its website. 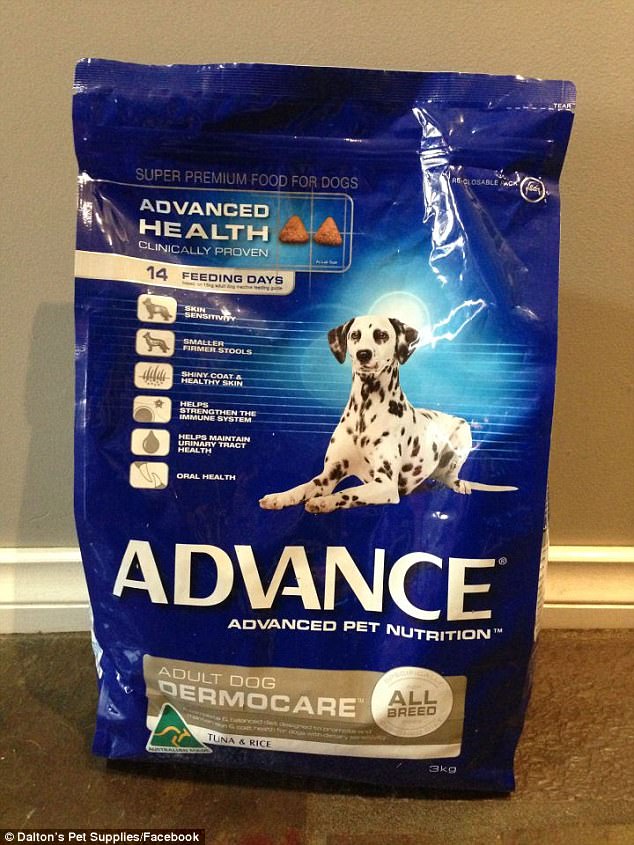 The Advance Dermocare (pictured) range in 3kg, 8kg and 15kg bags has been voluntarily taken off shelves nationwide

‘We will continue to provide information to University of Melbourne to enable further testing, and consult with the Australian Veterinary Association. We understand Australian pet owners may be worried. Concerned pet owners should contact their veterinarian, or our consumer care team on 1800 640 111.’

Vet experts probing the cause of the illness affecting both the Victoria Police squad’s german shepherds and labradors — say food is a ‘common factor’ between the nine infected canines.

The sick dogs from Victoria Police contracted the debilitating condition in December and are still battling the ‘extremely rare illness’. 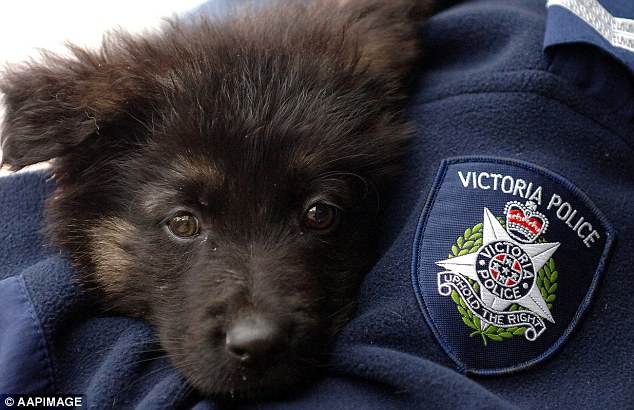 So far, one dog has died and the other eight remain unwell with varying levels of illness. 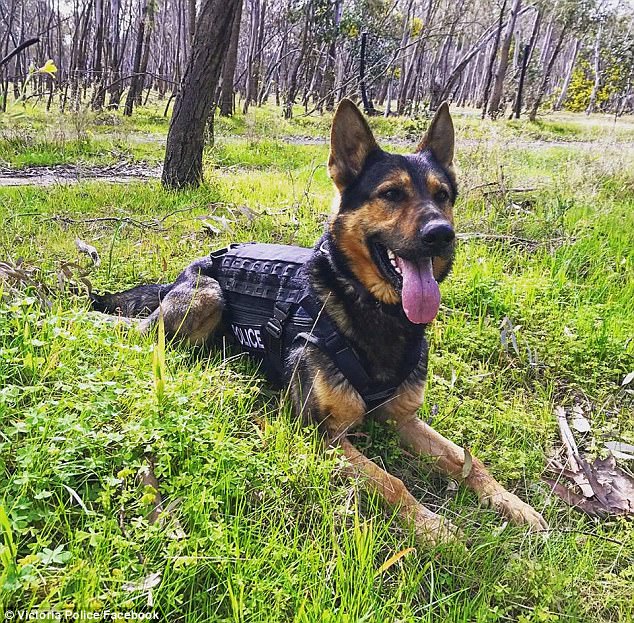 The DCS has since ordered dog handlers to avoid feeding the canines certain foods as it awaits autopsy results.

Inspector Jon Woodyatt from the Dog Squad told 3AW that although each dog has its own specific diet requirements, food is not being ruled out as a contributing factor. 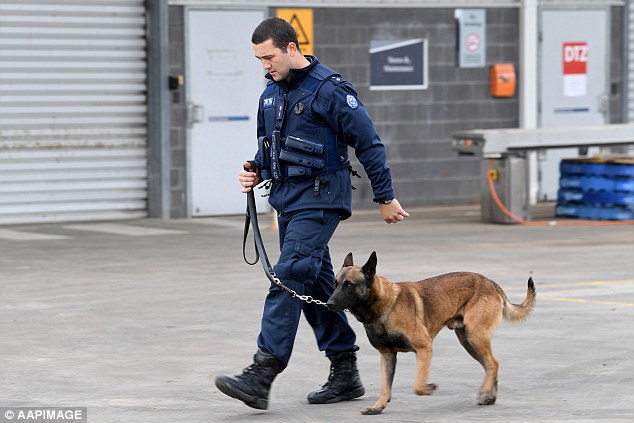 ‘At this stage, we’re told there was a number of common factors which we are looking at. One of them does include the food that we’re feeding the dogs,’ he said.

‘We’re told having this number of dogs with this condition is pretty much unheard of in veterinary circles.’

Victoria Police told Daily Mail Australia that the diagnosis of nine dogs in one incident is extremely rare and they are still figuring out the cause of the condition.

‘We are saddened that one police dog has been put down as a result of the condition which can hamper adequate nutrition.’