Pittsburgh Steelers star Sean Davis is being sued for posting a Snapchat ‘mocking’ a Chick-fil-A employee.

Davis, 24, was visiting the Chick-fil-A drive-thru in Cranberry Township, in Pennsylvania, in December, when he began filming the teenage member of staff on his cellphone.

‘Chick-fil-A got little kids. This kid like eight years old. No wonder the lines be so long at Chick-fil-A,’ he said in the short clip, the Pittsburgh Post Gazette reports.

Now the family of the teen, who is not identified in the lawsuit, are suing the Steelers safety for unspecified amount in damages, claiming his video caused their son to be bullied.

The suit claims Dabis’ comments were ‘extreme and outrageous’ and ‘intentional and/or reckless.’

Attorney Andrew Leger, who represents the family, wrote in the suit that the teen ‘has been hurt and injured in his good name and reputation,’ and ‘exposed to public hatred, contempt and ridicule.’ Davis, 24, was visiting the Chick-fil-A drive-thru in Cranberry Township (pictured) in Pennsylvania, in December, when he began filming the teenage member of staff on his cellphone

The lawsuit, which described the teen as ‘very small for his age, regarding his small stature and youthful appearance’, stated that the fast food employee didn’t realize the football star had filmed him until his school classmates began teasing him.

‘He got abused in school for a few weeks over it,’ Leger said in the suit, which claims for libel, cyberbullying, intentional infliction of emotional distress and slander.

Lee said it was clear that his client’s intent was not to demean the team, but was a comment on the long lines at Chick-fil-A. 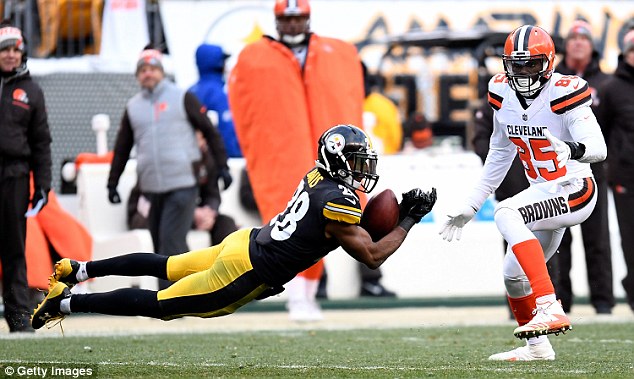 Davis (pictured left, as he intercepted a pass in front of David Njoku #85 of the Cleveland Browns in the second half during the game at Heinz Field on December 31) said he filmed the clip as a comment on the long lines at the food chain ‘It was a commentary on a billion-dollar corporation,’ added Randy Fisher, general counsel for MBK Sports Management Group, which represents Davis.

Lee said that Davis offered to invite the teen and his friends to spend the day at the Steelers training camp as his guests, and accompany him at his football camp in Washington, D.C. where Davis planned to address cyberbullying.

But the Chick-fil-A employee, who has allegedly suffered headaches and depression since the clip was posted, and his family reportedly rejected the offer.

Leger said that the family demanded Davis do a public service announcement for cyberbullying, but the football star refused as he said the allegations he cyberbullied the teen were not true.