Fans delivered a damning assessment of Romeo Beckham’s professional debut on Sunday evening, insisting comparisons to his father David end with their position on the pitch.

The 19-year-old made his bow as a right winger for Fort Lauderdale CF, the reserve team of the Inter Miami MLS franchise, which is owned by his father.

Romeo played 79 minutes of the 2-2 draw against South Georgia Tormenta in the third tier of the game in the United States, and a 28-second highlights video of Romeo’s debut in US League One was later posted by Sky Sports. 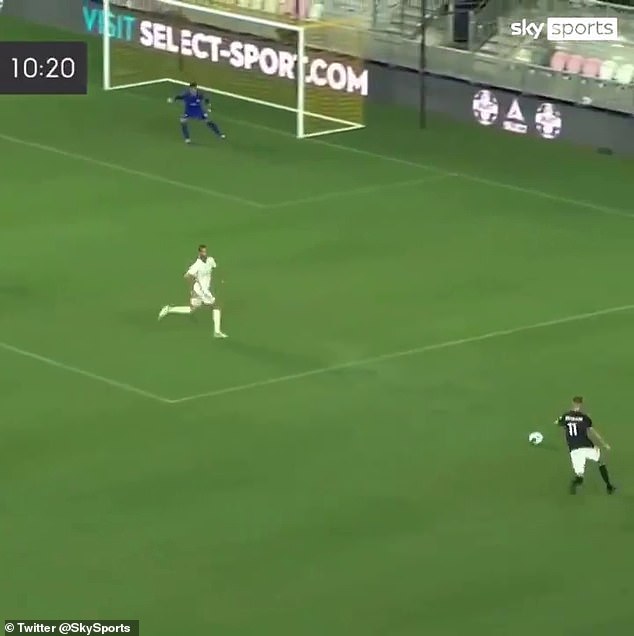 Romeo played 79 minutes of the 2-2 draw against Tormenta, and highlights of him were posted 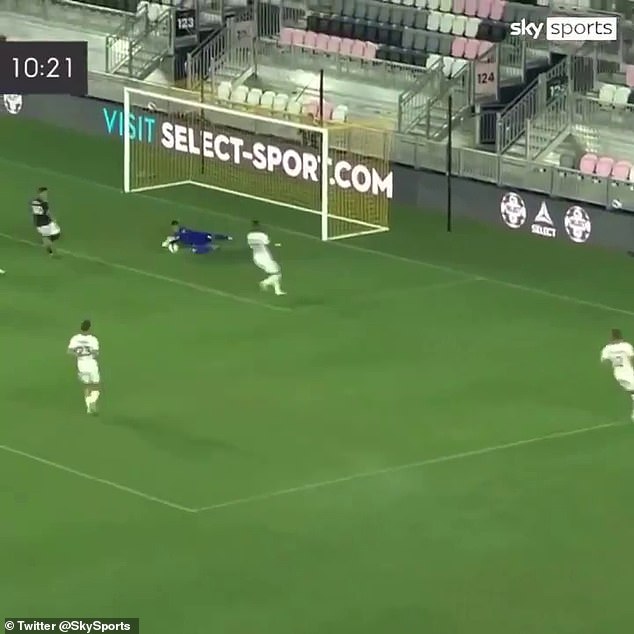 But it only showed him delivering two crosses, both of which were claimed by the keeper

Watch as David and Victoria Beckham’s son Romeo made his professional debut for Fort Lauderdale, starting their game against Tormenta in US League One. pic.twitter.com/aUFvjJpX1k

The first action in the video shows him in plenty of space putting a cross into the box from the right-hand side, but goalkeeper Pablo Jara does well to claim the ball low down.

He is then shown doing similar in the next part of the clip, this time whipping in a delivery from further out in the second half, but Jara’s replacement Carlos Avilez claims with ease under little pressure.

Romeo is then shown leaving the field, being substituted for Abel Caputo with 11 minutes of the game remaining.

And after watching the clip themselves, fans claimed that the resemblance between him and his father – renowned for his crossing and set-piece ability when turning out for Manchester United, Real Madrid and England – ends with the position they play. 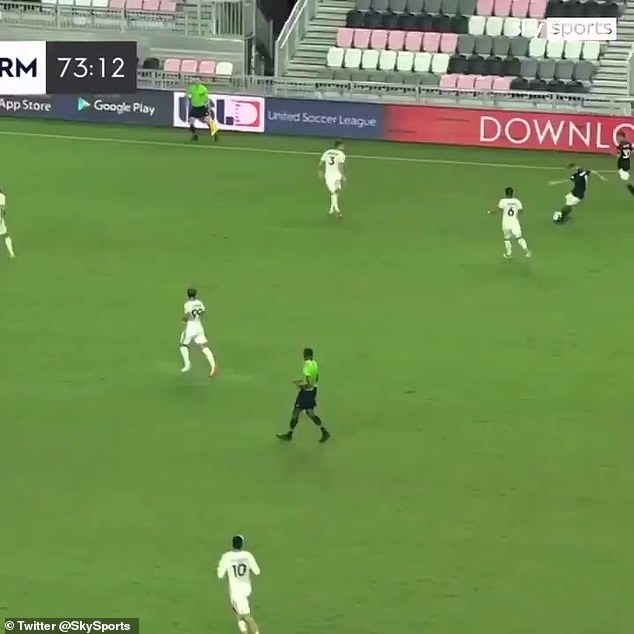 A second cross came in the second half in the highlights package, which was more floaty 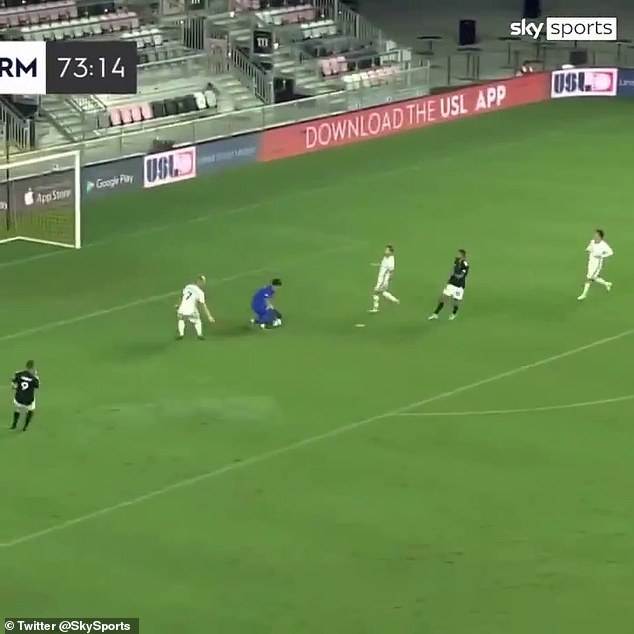 That was also claimed by the substitute goalkeeper, who was under less pressure when collecting 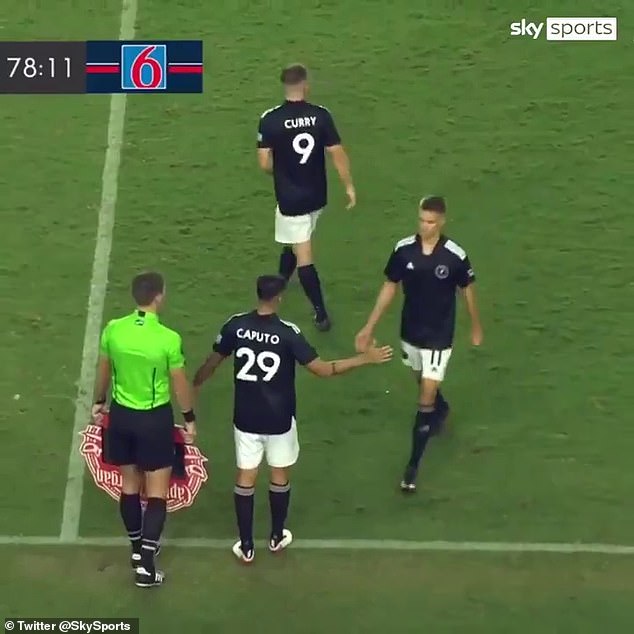 One tweeted: ‘It doesn’t run in the family’ followed by a series of laughing emojis, while another fan simply asked: ‘He played 79 mins and that’s the best you could find for highlights?’

Others were also unhappy, adding: ‘Seen better crosses in the Sunday league,’ while another simply said: ‘Two really bad crosses and subbed off, bad highlights them.’

Others comments also included: ‘Imagine looking bang average in the MLS reserve league,’ and ‘Spellbinding stuff. Should’ve shown us him warming up too.’

Some however could not help but make a joke about sides struggling in the Premier League, with one tweeting: ‘Looks poor from that, when does he move to Arsenal?,’ while another added: ‘And his only highlights were two poor crosses into the box that keeper caught… when do Newcastle sign him?’

Another also slammed his performance but agreed that the highlights – which did not show his other involvements – did him no favours, adding: ‘Might well be the worst 28 seconds of highlights of a player you could see. Doing him dirty putting the substitution in…’

The teenager did, however, show some flashes of brilliance and linked up well with Harvey Neville – son of former United star and current Miami head coach Phil – who started for Fort Lauderdale in the middle of the park.

The Beckham and Neville sons combined well in the 57th minute of the match, with Romeo putting in a testing cross which his team-mate headed just wide.

Spellbinding stuff. Should’ve shown us him warming up too.

Lucky he has his dad’s millions to fall back on!

And some users did express their sympathy with Romeo, suggesting following in his father’s footsteps was never going to be an easy task.

One tweeted: ‘Good luck to the kid. Living up to that name isn’t going to be easy. Whether it’s fair or not, he’s going to have a lot of eyes on him. I don’t know if I’d deal with that pressure very well.’

Another was equally supportive, stating: ‘And the pressure on him to surpass his father’s achievements begin’, while another was unhappy with what the video showed, adding: You’ve really thrown the poor lad under the bus with this highlights reel. We’ve all got start somewhere so good on him!’

But these users are not the only people who believe Romeo can have a successful career in the game, with Inter Miami head coach Phil Neville lauding Romeo Beckham’s start to life on the pitch.

2 really bad crosses and subbed off, bad highlights them.

Might well be the worst 28 seconds of highlights of a player you could see.

Doing him dirty putting the substitution in… 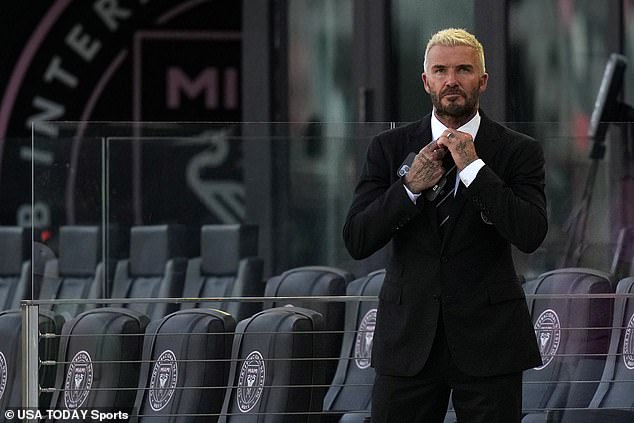 Neville has revealed that Beckham is keen for his son to earn his place rather than using his status as Golden Balls’ son to forge his career.

‘I think the first thing that David said to me was, “You have got to be harder on him than anyone else”,’ Neville said via The Sun.

‘He has got to work harder than anyone else to get into that team because there will be questions, there will be expectations on his shoulders.’

The Inter head coach was impressed with Romeo’s display despite it lacking the same quality of his father’s illustrious career.

‘I thought he did really well,’ Neville added.

‘I think the measure of his performance was that he was only planned to play 45 minutes, and he played nearly 80 minutes because he is a boy that is hungry. 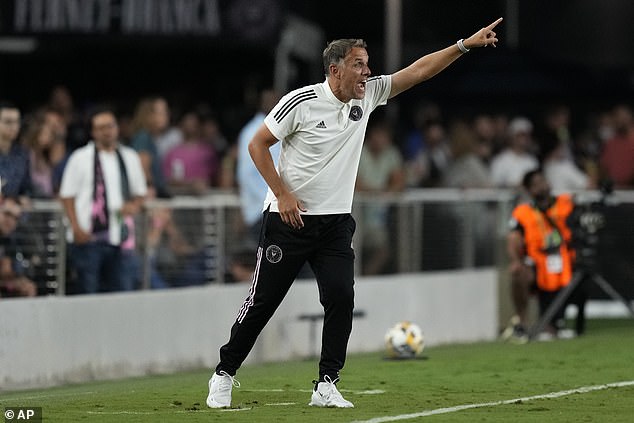 ‘He has got a lot of pressure and expectation on his shoulders, but what he has got is his feet firmly on the ground.

‘He knows he has got a lot of development to do, and he has got all the right attributes – character, determination, good person – to have a really good opportunity of making it in professional football.

‘He is so popular in the dressing room. He has obviously been brought up the right way by his parents.’

Fort Lauderdale took the lead twice in the first half through Mitchell Curry and George Acosta, in between Azaad Liadi’s first-half equaliser for Tormenta, but Marco Micaletto scored a late equaliser for the away side after Romeo had been taken off the pitch.

You’ve really thrown the poor lad under the bus with this highlights reel.

We’ve all got start somewhere so good on him!

Good luck to the kid. Living up to that name isn’t going to be easy. Whether it’s fair or not, he’s going to have a lot of eyes on him. I don’t know if I’d deal with that pressure very well. I barely survived our morning meeting today on camera in front of 4 people.

Winger Romeo was on the books at Arsenal alongside his brothers Brooklyn and Cruz, but quit the north Londoners’ academy in 2015 as his father revealed his son had separate interests other than football.

While Romeo has undergone a modelling career since leaving the Gunners, the teenager kept playing football while he was studying at Millfield School, while he also trained under England’s attack coach Alan Russell, who also coaches the likes of Harry Kane and Raheem Sterling in individual sessions.

He began training with his father’s team Inter Miami earlier this year, before signing professional terms with Fort Lauderdale at the start of September.