Farm holidays: Nine of the best rural retreats from Northumberland to Devon and Wales

We’d been driving all day from the Midlands to South Wales. As we approached the village of Laugharne, my mother announced that the landlady at the farm where we were staying was a Mrs Rees.

For some reason, I pictured this Mrs Rees as a cross, thin-faced woman in an apron with a rolling pin ready to bash disobedient six-year-olds like me.

Instead, she turned out to be the kind of farmer’s wife you’d dream of, with twinkling eyes and a lovely soft voice like thick butter. She cooked hearty farm suppers and made the best biscuits in the world.

Surveys often find that for British children, the most perfect holiday of all is on a British farm

At the Reeses’ farmhouse on Gosport Road in Laugharne, we had the best holidays children could dream of: bringing in the harvest, riding ponies, playing with kittens and messing about with Dan, the cutest labrador ever to sit on your foot.

Surveys often find that for British children, the most perfect holiday of all is on a British farm. I’m not surprised.

Give me Mrs Rees’s farm any day over the best and most well-equipped kids’ club in some five-star resort. Margery Rees died, aged 95, earlier this month — a pioneer, in her quiet way.

So, as a tribute, here are nine brilliant British farm holidays, not just for children but for adults looking to connect with their inner shepherd or just hide away for a bit. 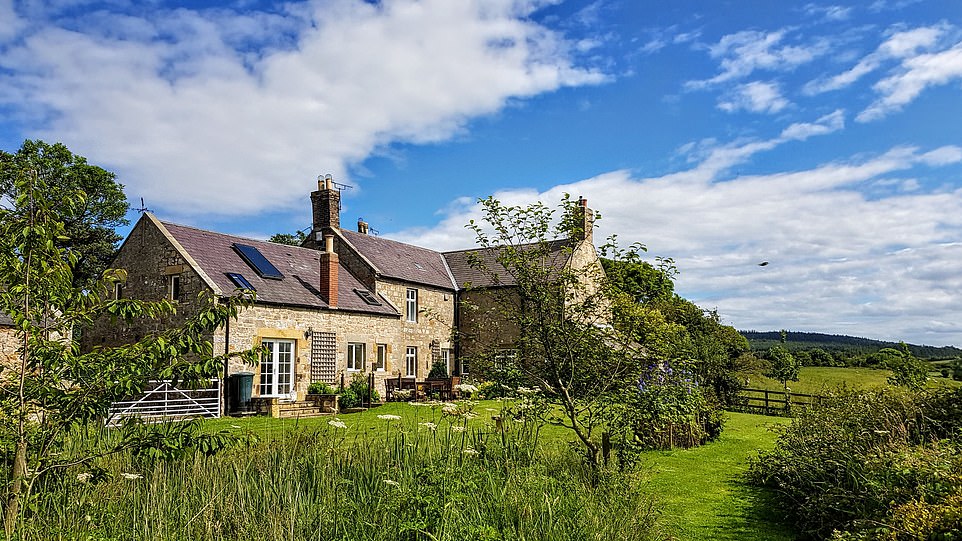 Accommodation at Hunting Hall in Northumberland, which is home to an amazing array of animals

Hunting Hall is in Northumberland, just inland from the holy island of Lindisfarne.

It is home to an amazing array of animals: sheep for the organic wool shop, rare breed pigs, donkeys, peacocks, geese.

There are also rare varieties of apples, pears, plums, damsons and greengages in the community orchard and a farm trail winding through the lot.

Good to know: Accommodation is in sturdy cottages, including one called The Fuffins.

Details: The Fuffins sleeps up to four people from £408 a week (huntinghall.co.uk). 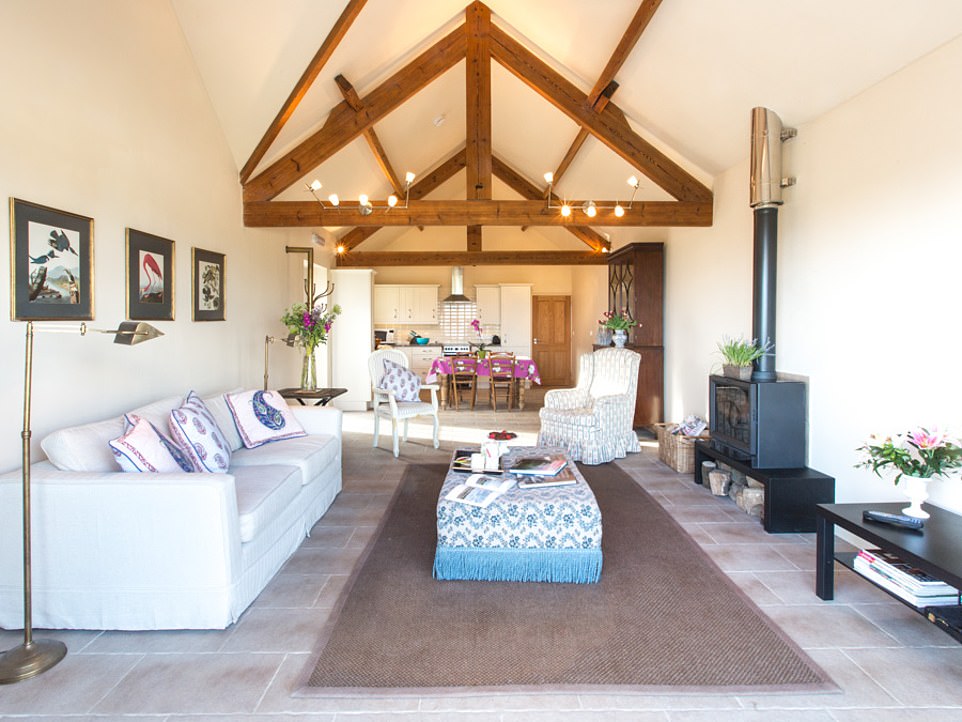 Inside High Park Farm on the edge of the North Yorkshire Moors. Three footpaths lead from the front gate, so there’s no need to drive throughout your stay

High Park Farm is on the edge of the North Yorkshire Moors, just over a mile from the small market town of Kirkbymoorside. This is marvellous walking country and three footpaths lead from the front gate, so there’s no need to drive throughout your stay.

For the energetic and sports-mad: tennis, billiards and riding. For the more aesthetically inclined: photography and painting.

Good to know: The owners can provide meals on request and picnics.

Details: Priced from £125 a night (highparkfarm.co.uk). 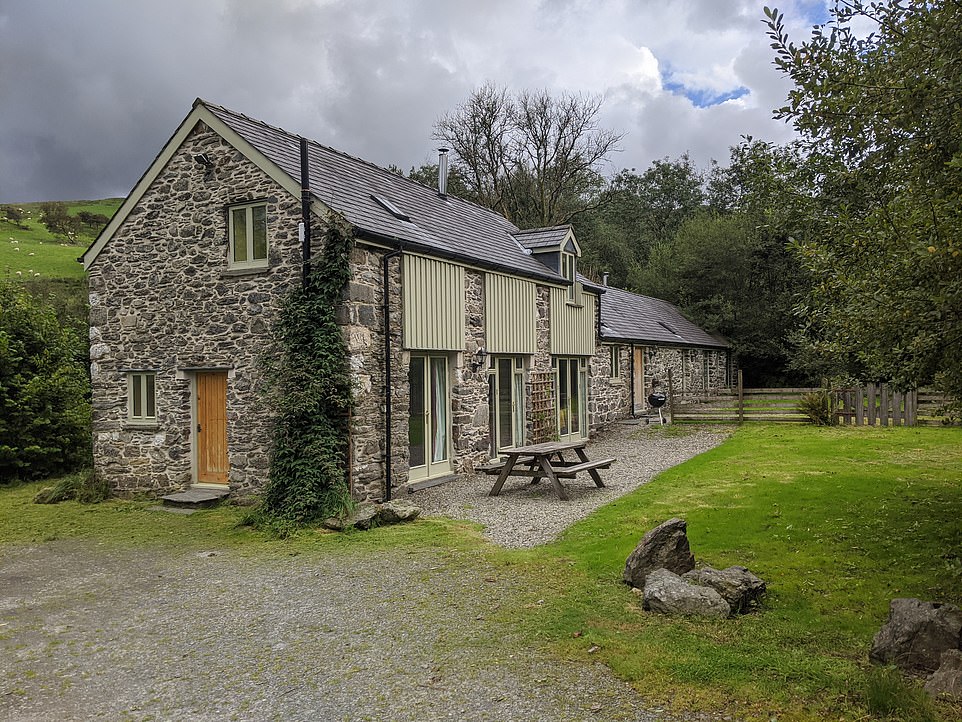 At Cefn Coch, pictured, south of Machynlleth, you can stroll with forest ecologist Joe Hope in a ‘Celtic rainforest’

Visit remote Cefn Coch, in the gentle hills south of Machynlleth, and you can join forest ecologist Joe Hope for a stroll in what he calls the ‘Celtic rainforest’. Accommodation is in a cosy barn or cottage.

Good to know: Bring waterproofs: that ‘rainforest’ isn’t a joke. 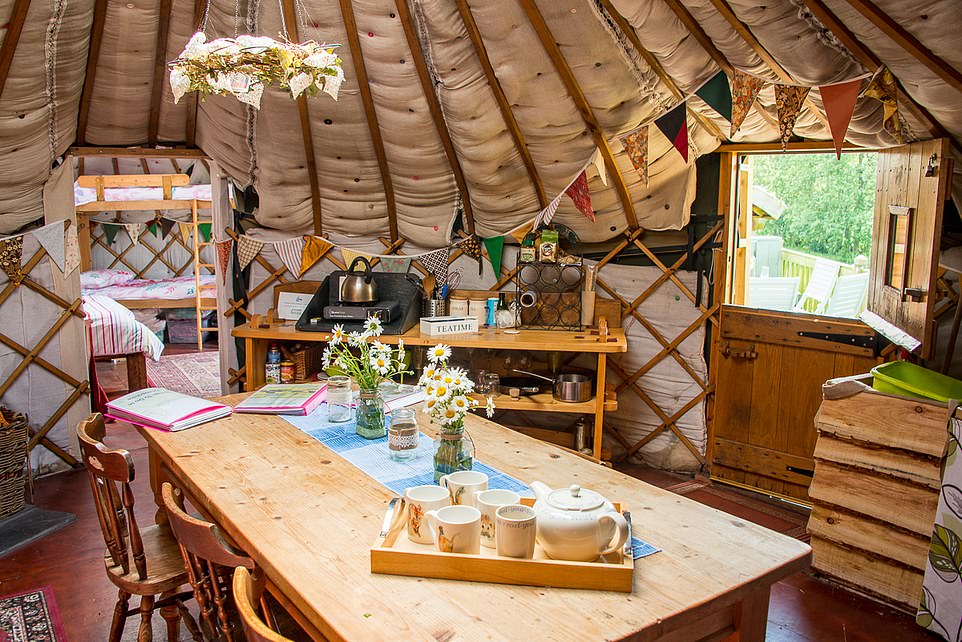 Inside one of the yurts at Fordhall Farm, deep in the fine farming country of north Shropshire’s Tern Valley

Deep in the fine farming country of north Shropshire’s Tern Valley is Fordhall Farm — where your room for the night is a colourful yurt complete with a deck that’s perfect for enjoying a sunset tipple. Great riverside walks are to be had from this working organic farm with its pleasant cafe and shop.

Good to know: For extra-large families — or offspring and their friends — the Straw Barn sleeps 25. 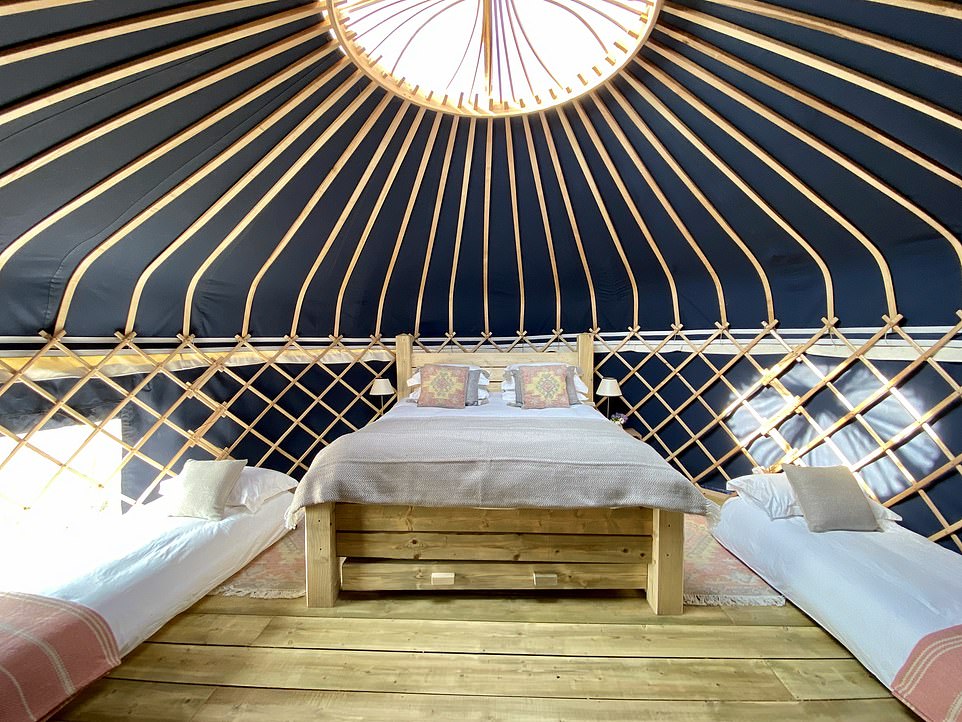 There’s glamping — and then there’s glamping in the grounds of a majestic 17th-century hall. Raynham Hall, near Fakenham in Norfolk, has long been a centre of farming innovation — the second Viscount, Charles ‘Turnip’ Townshend, played a prominent role in the agrarian revolution. The current Townshends have invested hugely in solar energy as well as biogas (using farm waste).

Good to know: Viscount Raynham, CEO of the estate, plans to introduce guided farm tours and a visitor centre in 2022. In the meantime, there are miles of walks across the estate and farm. 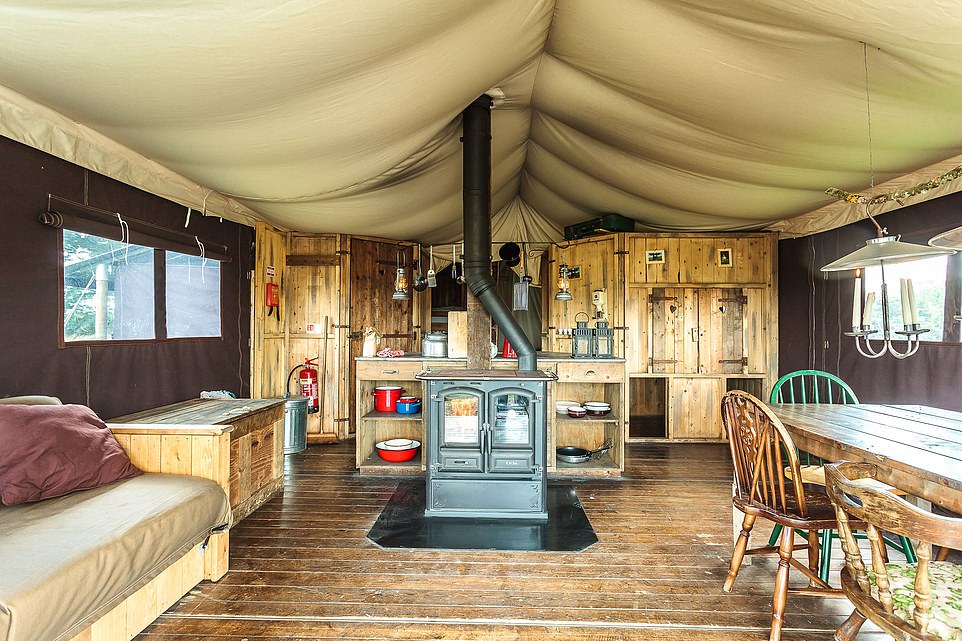 Inside a canvas lodge at Fountain Violet Farm near Kingswear in Devon. The farm is set in 130 acres of rolling grassland

At Fountain Violet Farm near the Devon town of Kingswear, enjoy the 130 acres of rolling grassland as well as the resident population of 5,000 hens.

Then you have adventures on the River Dart, seaside expeditions at Mill Bay Cove, and the chance to explore the splendid nearby 15th-century Kingswear Castle.

Good to know: Lambing season is especially popular — you can bottle-feed at several neighbouring farms. 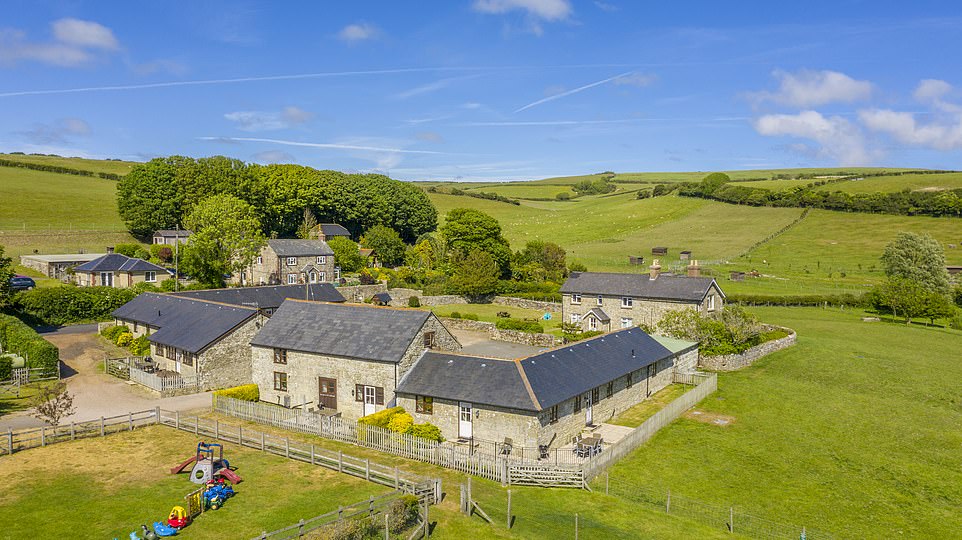 There are nine dog-friendly cottages at Nettlecombe Farm, pictured, on the Isle of Wight’s south coast 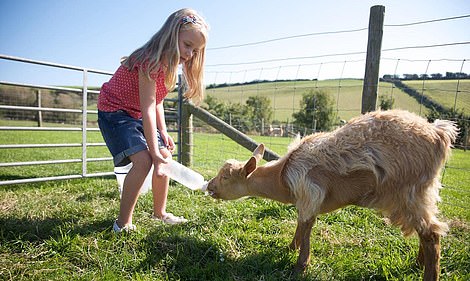 At Nettlecombe Farm on the Isle of Wight’s south coast, you get to play at being a farmer on a daily feeding tour.

Reindeer, alpacas and emus are among the more unusual resident creatures.

Go fishing in one of the three lakes, or take part in some un-farm-like yoga classes.

Good to know: All nine cottages are dog-friendly.

Details: Priced from £525 per week (nettlecombefarm.co.uk). 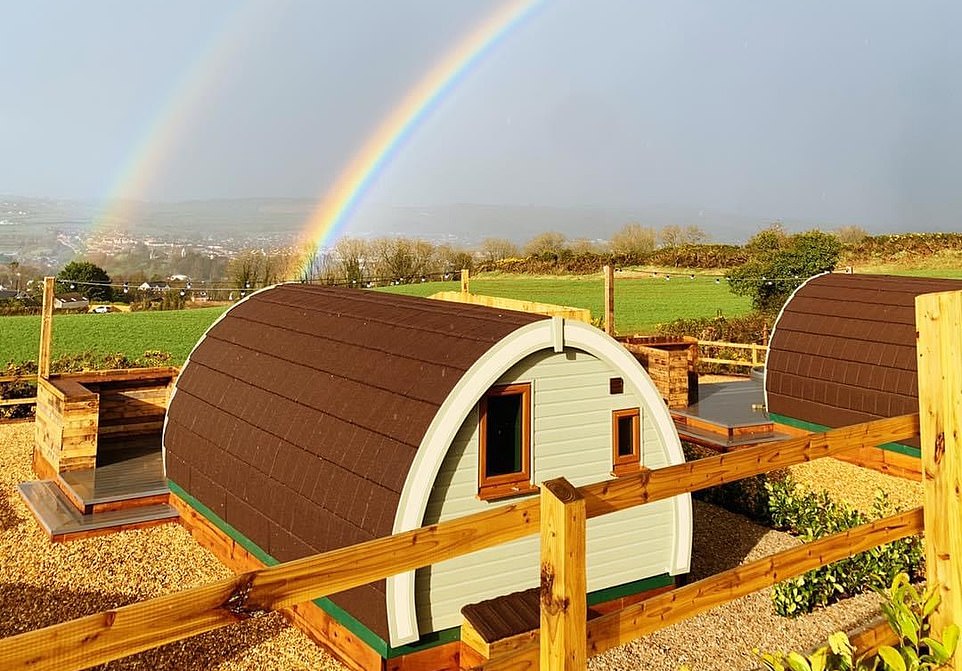 One of the accommodation pods at Streamvale Open Farm close to Belfast. The farm nestles within 50 acres of open country

Belfast is enclosed by rich farmland, and the Falls Road will feel a million miles away at Streamvale Open Farm, even though in reality it is a mere ten miles away as the crow flies.

The farm nestles within 50 acres of open country, about a 15-minute drive from the coast. But you’ll probably be too busy cuddling lambs, rearing piglets and watching dogs jump over fences for sightseeing.

Good to know: Accommodation is in pods — the Deluxe ones with a deck, coffee machine and hot tub are for adults only.

Details: From £135 a night for a Premium Pod with a hot tub (streamvale.com). 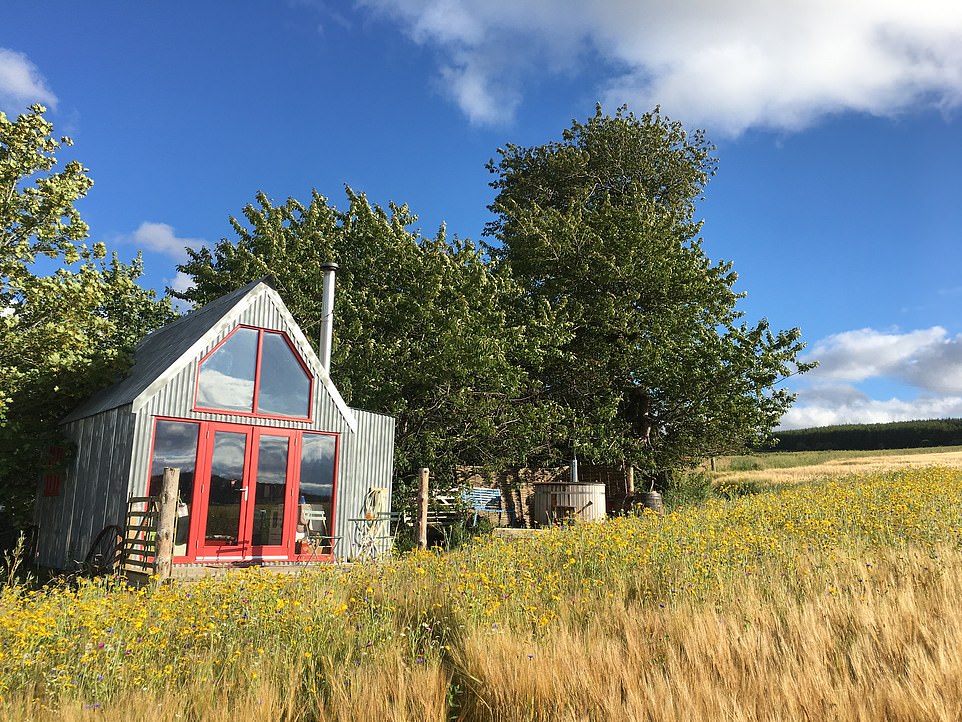 The Sheep Shed at Boutique Farm Bothies in Aberdeenshire, which has its own hot tub overlooking fields of barley

Owners James and Jane have turned traditional estate buildings into colourful cottages on the Aberdeenshire coast. Boutique Farm Bothies is all about sheep, strawberries and Speyside whisky for the grown-ups.

Good to know: Adults should opt for the Sheep Shed, tucked away in a copse, with its own hot tub looking over fields of barley.

Details: Bothies available from £450 for a three-night midweek stay (boutiquefarmbothies.co.uk).