A fashion designer of 50 years standing, Norma Kamali, 74, has seen a myriad trends come and go. She spent much of the Swinging Sixties in London, nightclubbing with rockers such as Jimi Hendrix (‘a very sweet and considerate guy’), Jeff Beck and Led Zeppelin’s Jimmy Page.

In the Seventies she was a fixture of Manhattan’s legendary Studio 54, dancing every night with the likes of Grace Jones and Bianca Jagger, whom she also dressed. Meanwhile stars such as Keith Richards and Bette Midler were flocking to her Madison Avenue boutique where she was gaining a reputation as a fashion visionary.

She invented the concept of athleisure — sports clothes worn as daywear (today she’s in her eponymous label’s blue-and-white shell suit that on her is achingly cool, though would make me look as if I’d just been handed an Asbo). She was responsible for the red swimsuit in Farrah Fawcett’s pin-up that adorned a million teenage bedrooms, as well as for the Eighties mania for shoulder pads which she displayed on supermodels such as Linda Evangelista.

Today, Rihanna and the Kardashians are fans of her sexy, draped dresses, while Beyonce wears an electric yellow Kamali frock in the new video for her single from the Lion King.

Given such a high-octane existence, you might expect Norma to be rather drained. Yet here she is, fresh off a plane from New York, looking a good three decades younger than her years. She is straight-backed and lithe-limbed, and her skin glows so brightly it could power the National Grid.

It’s all testament to the other side of Norma; for despite the glamour and the partying, she was also one of the original wellness gurus. Long before Gwyneth Paltrow was encouraging us via her Goop website to steam our vaginas, Norma was going on retreats with shamans, juicing, meditating and practising then-weird forms of exercise such as pilates.

‘At the time that world was very isolated, so I rarely mentioned what I was doing because I was pigeonholed as wacky,’ she laughs.

Norma became obsessed with wellbeing as the result of the Aids epidemic, which ravaged her circle. ‘We were young, we thought we were going to live for ever — but then in 1980 two really good friends, both in their 30s, died of Aids within six months of each other,’ she explains.

‘There was no medicine, nothing anyone could do to stop the virus, so I began seeking information about how to build a strong immune system through a healthy lifestyle.’ She spent decades researching for herself, then after the 9/11 terrorist attack on New York, she sensed new tensions in the air.

‘Everybody’s immune system was experiencing a layer of stress that had never been felt before,’ she says. ‘That was the beginning of this new vibration that we would find ourselves living under.’

In response, she opened a Wellness Café at the back of her store, serving the vegetable juices and green teas that she swears by, as well as selling products such as olive oil, which she loves for its antioxidants and ‘tooth soap’ — toothpaste in block form made without chemicals which, she says boldly, ‘can also pull bacteria out of your system’. 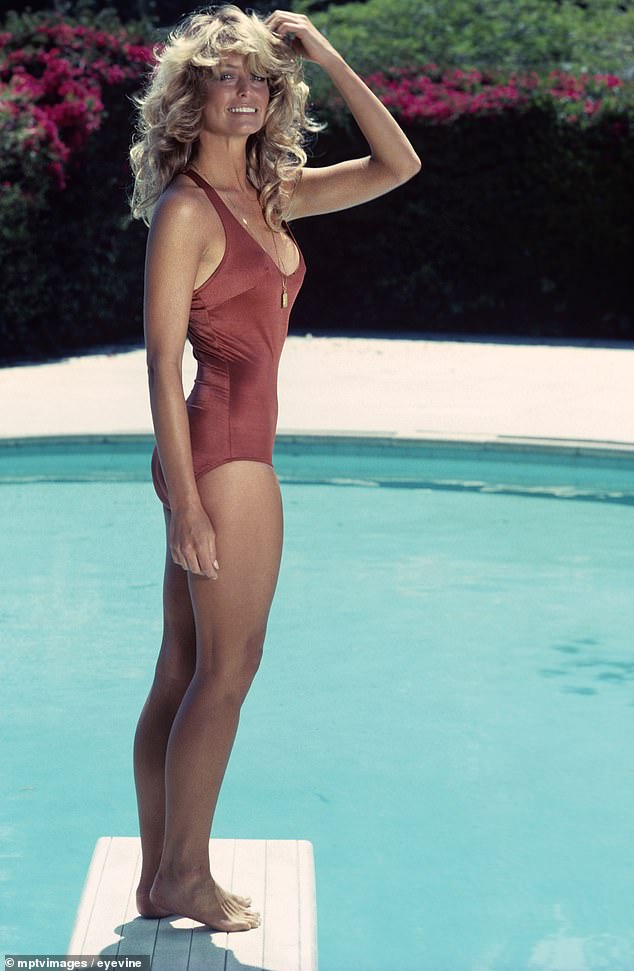 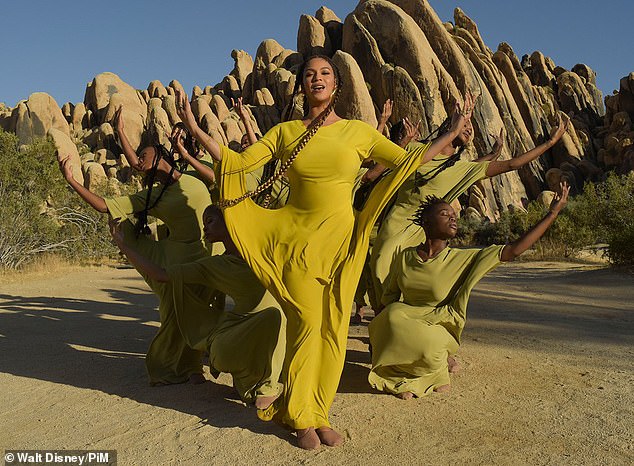 Fast forward nearly 40 years and every charlatan seems to have jumped on the wellness bandwagon, flogging crystal-encrusted gizmos and herbal supplements.

‘I’m seeing a world that’s overrun by supposedly healthy practices and I look at it and I say, “Some of this doesn’t smell right, there’s a little hokum-pokum going on here”,’ Norma says in her nasal Noo-Yoik tones.

Is she talking about Goop? ‘No! Bravo for Gwyneth — a lot of people who might not try healthy things normally will do what Gwyneth tells them because she’s so popular.’

But now Norma wants her share of the global wellness industry that’s worth more than £2 trillion. And why not? After all, she explains, people are always asking her, ‘What are you doing with your skin? What is your regime?’ So now she has decided to share her secrets.

Norma’s skincare range, NormaKamalife, which has just launched in Selfridge’s and in New York, is based on the products she has long used on her own skin — all from natural ingredients such as charcoal, cacao, jojoba and aloe, consisting of a cleanser, exfoliator, moisturiser and self-tanner.

I’m jolly excited at the idea that slapping on some face cream might turn me into as perfect a creature as Norma, yet I suspect moisturiser alone may not be enough for the Dorian Gray effect to kick in. So what else must I do to stay forever young?

As I feared, there’s no shortcuts — it’s all about being sensible.

‘I believe in diet, exercise and sleep,’ Norma proclaims. ‘Those things can get you through some really crappy times.’ 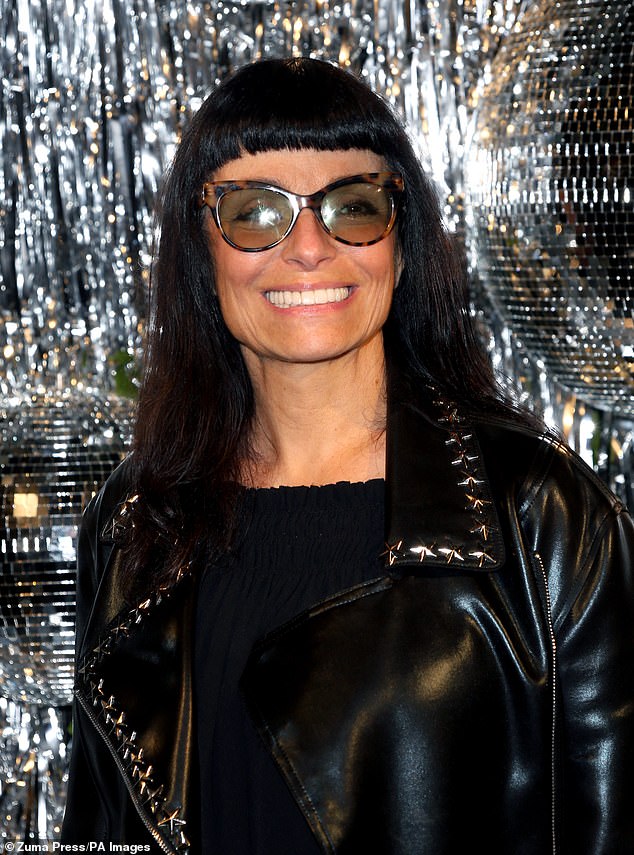 Despite the glamour and the partying, Norma (pictured in October 2018) was also one of the original wellness gurus

Norma’s gradually cut meat, dairy products and sugar from her diet, instead feasting on green juices, salmon (for its skin-plumping omega oils) and raw vegetables marinated with lemon juice, olive oil and turmeric.

What about booze? I ask apprehensively. Norma, who’s never enjoyed the taste of alcohol (except for Guinness, which she happens to be allergic to — ‘maybe that is the universe’s way of protecting me from something I shouldn’t touch anyway’), fixes me sternly through her cats-eye lenses.

‘Alcohol for women is not a good thing,’ she tells me. ‘At a certain age that morning-after look doesn’t reverse. It’s the anti-pretty drug, so if you don’t want to be pretty keep drinking.’ Right-oh, then.

For exercise, Norma swears by daily ballet-type barre classes at Physique 57, an exercise studio near her shop. ‘But you don’t need money to keep fit; if there are stairs, you are at a gym.’

But 4.30 is the middle of the night! ‘I like to get to work early when nobody is around and I have time to think of all the things I want to do.’

Norma’s skin is taut apart from a few wrinkles around the mouth, but she doesn’t have the wind-tunnel features that characterise so many New Yorkers of a certain age. Like Vogue editor Anna Wintour, her statement fringe, glasses and teeth do the talking.

She doesn’t directly admit to having Botox or fillers, but says: ‘I will try just about everything, though I’m not good about anything where you have to go under. My mother died after an operation where the anaesthesia did her in.’

Norma tried a so-called vampire facelift where plasma from your own blood is reinjected back into your face. ‘It was extremely painful and I’m not sure I saw any results,’ she says. 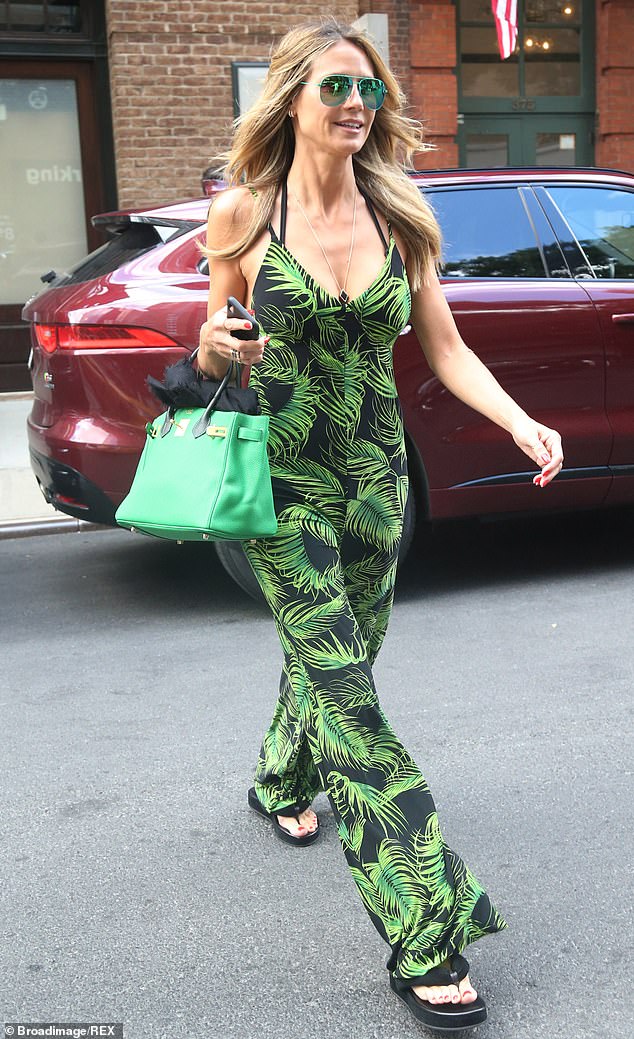 Heidi Klum out and about in New York on June 25, 2018, sporting a Norma Kamali jumpsuit

Instead, Norma recommends facial acupuncture — she has regular sessions with Chinese medicine doctor Dr Jingduan Yang, after her Chinese girlfriends told her this was the secret of their perfect skin.

‘I’m for everyone doing whatever they want to their face and bodies if it helps their confidence, but sometimes people do go a bit far and you can hardly recognise them,’ she says. ‘Acupuncture is not like that: it allows you to look like the best possible version of you.’

Part of the reason Norma has time for this beautification is she never had children. Having divorced her husband Eddie Kamali at 30, she now lives with her lawyer boyfriend and her adored elderly miniature dachshund, Zeke.

‘I think having children is the most selfless thing a human being can do, I see what a big sacrifice they involve and my career was so busy I didn’t think I could do both,’ she says frankly. ‘I didn’t want to bring a kid into the world who was crazy because they weren’t getting enough attention.’

Although Norma only embraced wellness in her 30s, the concept was planted in her head from an early age by her mother, a Lebanese artist (who was divorced from Norma’s Basque father). Her mother was obsessive about all things alternative.

‘We always fight what our mothers tell us, so for years the last thing I wanted to do was be like her,’ Norma smiles. ‘She was a very flamboyant person and I was a very shy kid and thought she was kooky and embarrassing. 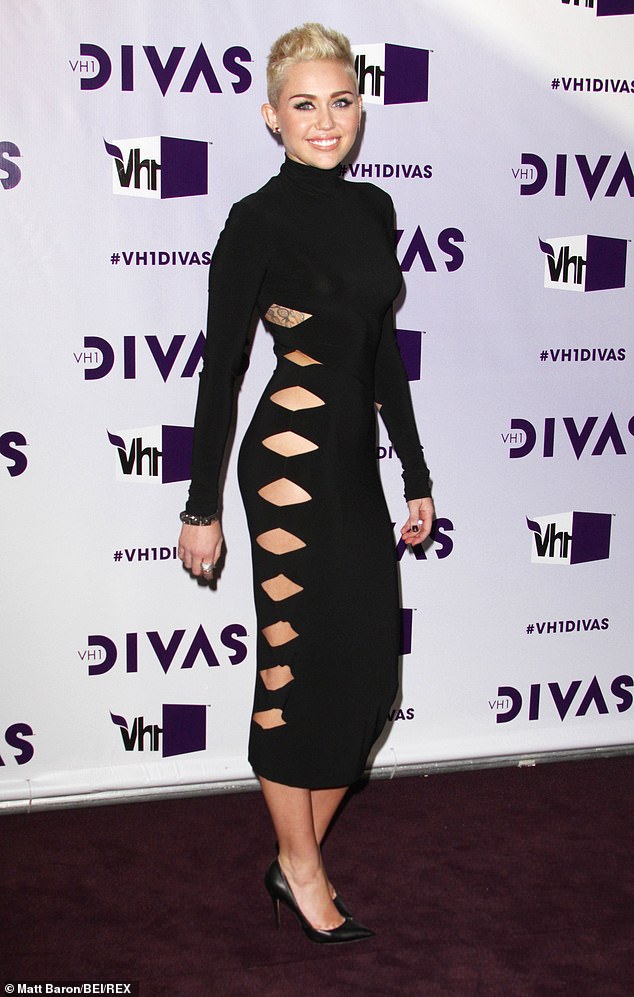 Miley Cyrus back in 2012 in Los Angeles, was a big fan of the fashion designer’s, sporting one of her stylish designs

‘She’d do exercises that were really ridiculous and had supplements all over the house. We lived in a tiny New York apartment where the windowsills were packed with herbs she’d grown and she had a steel juicer the size of a table that made the whole place vibrate and I’d think “Why are you doing this?”’ Desperate to leave home, at the age of 19 Norma married Eddie. By then she was working in the sales office of an airline and took full advantage of its employee offer of $29 return tickets to London, which she’d fallen in love with.

‘Every weekend for four years I got on a plane on Thursday night, spent the weekend in London and flew back on Monday,’ she recalls. She stayed at a Chelsea boarding house and spent her nights bopping with up-and-coming musicians. ‘They weren’t famous yet, though they were going to be, and they were as shy as I was so it was really wonderful.’

London’s streets provided fashion inspiration, and having discovered boutiques such as Biba and Bus Stop, Norma flew home with suitcases full of mini-skirts and psychedelic shirts.

‘In New York, it was the Mad Men era so no one wore a skirt above the knee. Cars would stop when they saw me and the drivers would shout I was a prostitute.’

But Norma’s friends loved her look, so with Eddie she opened a store selling her finds, while also whizzing up her own original creations such as jumpsuits made from parachute silk and evening dresses from gold lamé curtains.

Sales boomed, but when Norma turned 30, she walked out on both the business and the marriage.

Previously, she’s said Eddie was a heroin addict. ‘Let’s just say he had issues, and even though I was scared out of my mind I had to leave because if I stayed there would not have been a good ending for me,’ Norma says. 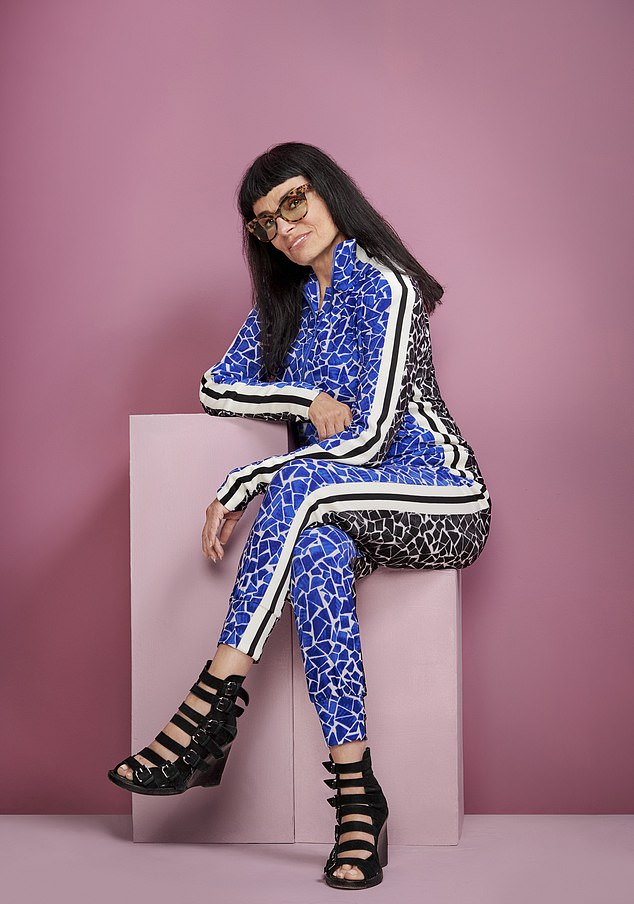 For exercise, Norma (pictured) swears by daily ballet-type barre classes at Physique 57, an exercise studio near her shop

She found herself single, with just $98 to her name in a flat containing a mattress on the floor and not much else. But from there, she reinvented herself as a designer, pioneering the use of stretchy Lycra in clingy, yet comfy garments such as leggings.

‘No one wore such things then,’ she says. ‘They just didn’t exist.’

Many of her ideas had practical origins: during a chilly camping trip, she thought how convenient it would be if her sleeping bag had arms so she could wear it outside for ‘bathroom breaks’.

The result was her sleeping-bag coat which instantly became a fashion classic. ‘New York winters are very cold, so the doormen outside Studio 54 would wear them and it was great advertising. Lots of people wanted to get into the club and they thought wearing one of those coats would help. In some cases I think it worked.

‘Not many styles are timeless, so I’m happy to say I played a little part in some of them,’ she continues, smiling.

For now, there are no plans to stop designing clothes and other wellness products — though she won’t yet say what. ‘I want to democratise what I do, to make my secrets available to as many people as possible, because a healthy lifestyle shouldn’t be for the elite,’ she says.

Her mother would be proud of her. ‘Yes, I found her so embarrassing but now I look in the mirror and see her looking back at me and I’m like, “Yup, you won”.’