A Paris prosecutor has revealed that the father of a four-year-old boy rescued by a hero dubbed ‘Spiderman’ went out shopping and then played Pokemon Go in the street as his son came inches from death.

Mamoudou Gassama was hailed a hero for single-handedly hauling the four-year-old to safety after scaling the facade of an apartment block in Paris.

Praising the 22-year-old’s bravery, Francois Molins revealed on BFM TV that the little boy had been in the care of another family and may possibly be on his way to Reunion Island to join his mother there.

The boy’s father was taken into custody after the harrowing incident and questioned by police.

Mr Molins said: ‘The father left the flat just as the incident was unfolding. He went shopping and then decided to play Pokemon Go in the street which took a little time before he returned home.’

The prosecutor revealed that the window was left open and there was no safety grille on the balcony to stop a child climbing up and falling over.

‘The father is very upset because he realises what he did and what could have happened,’ he said.

The father, who has not been named, has been told to appear in court in September and could face two years in jail for failing to care for a child under French law.

The Malian, dubbed ‘Spiderman’, will be made a French citizen after meeting with French President Emmanuel Macron this morning.

Malian immigrant Mamoudou Gassama (right), dubbed Spiderman for scaling four storeys to save a child dangling from a balcony in Paris, has met French President Emmanuel Macron (left) this morning

Mamoudou Gassama, 22, was hailed a hero for single-handedly hauling the four-year-old to safety after scaling the facade of an apartment block in the capital’s 18th arrondissement.

The dramatic rescue, which saw Gassama clamber from balcony to balcony and reaching the child in less than 30 seconds, was captured on video and widely shared on social media. He has since been compared to the Marvel superhero Spiderman.

Gassama, who said he arrived in France a few months ago ‘dreaming of building his life’ in the country, was pictured meeting French President Emmanuel Macron at the Elysee Palace this morning.

Macron said the migrant will be made a French citizen and will also be offered a place in the fire brigade. 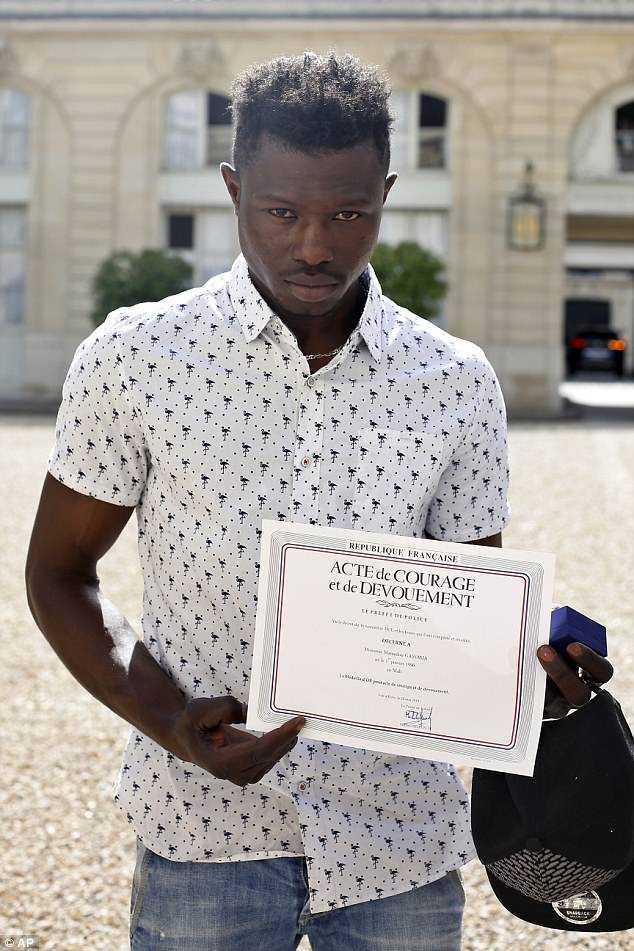 Mamoudou Gassama (pictured today), 22, was hailed a hero for single-handedly scaling the facade of an apartment block in the capital’s 18th arrondissement, and hauling the four-year-old to safety. He is pictured this morning displaying a certificate of courage and dedication signed by Paris Police Prefect Michel Delpuech 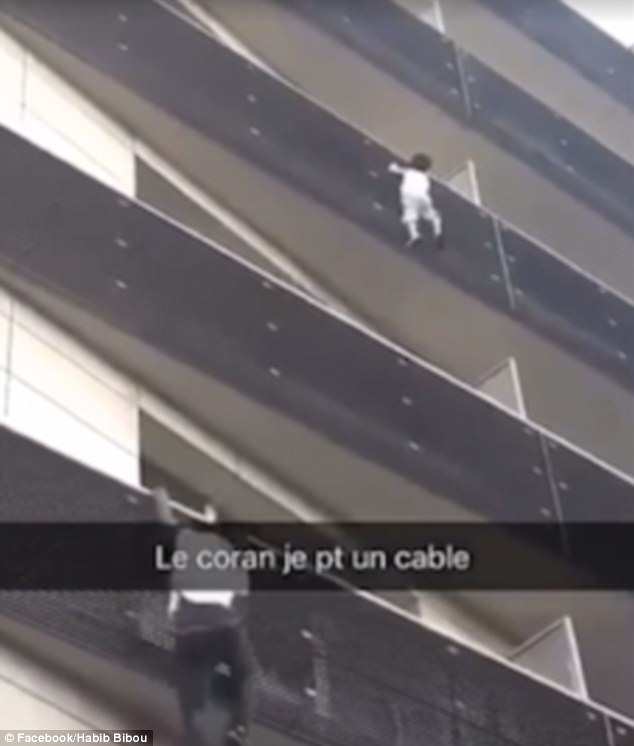 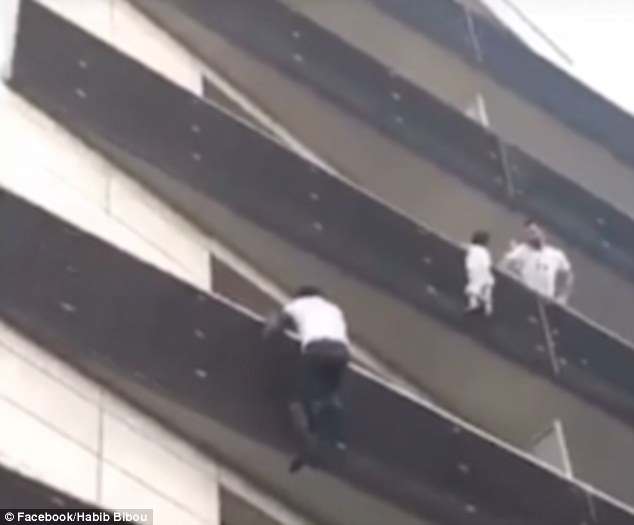 ‘All the (Gassama’s) documents will be put in order,’ Macron told the sporty 22-year-old who has become a national hero, referring to his immigration status.

In the meeting, live footage of which was carried on the president’s Facebook page, Macron gave Gassama a medal for bravery.

Without a thought for his own safety, Gassama took just seconds to reach the child in a spectacular rescue captured on film and viewed millions of times on social networks.

‘I was not thinking of anything. I went straight up’, Gassama, who wore jeans and a short-sleeved patterned shirt, told Macron, recounting the episode.

‘I’m pleased because it’s the first time I’ve received a trophy like that,’ Gassama, who arrived in France in September 2017 and lives in a hostel for immigrants, said after receiving his medal.

The incident took place at around 8pm on Saturday in northern Paris.

Film of the rescue shows Gassama pulling himself up from balcony to balcony with his bare hands as a man on the fourth floor tries to hold on to the child by leaning across from a neighbouring balcony.

On reaching the fourth floor Gassama puts one leg over the balcony before reaching out with his right arm and grabbing the child. Firefighters arrived at the scene to find the child had already been rescued.

One witness told Le Parisien: ‘There is a fence and a gap between them… The neighbour could not afford to lean back to get the child himself.’

The only injury sustained by the child was a torn nail. Gassama suffered a few scratches. An investigation into the incident is now underway. 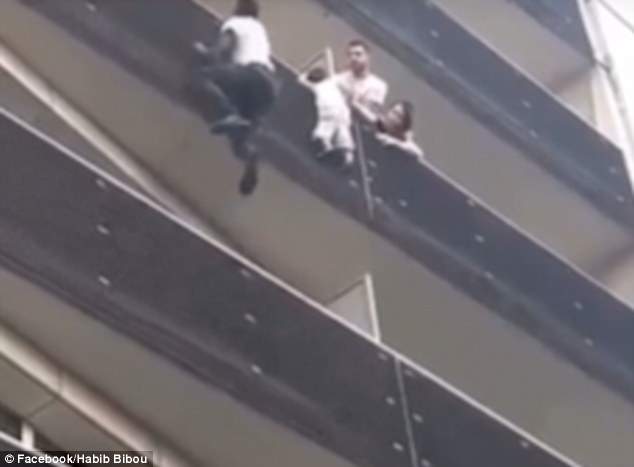 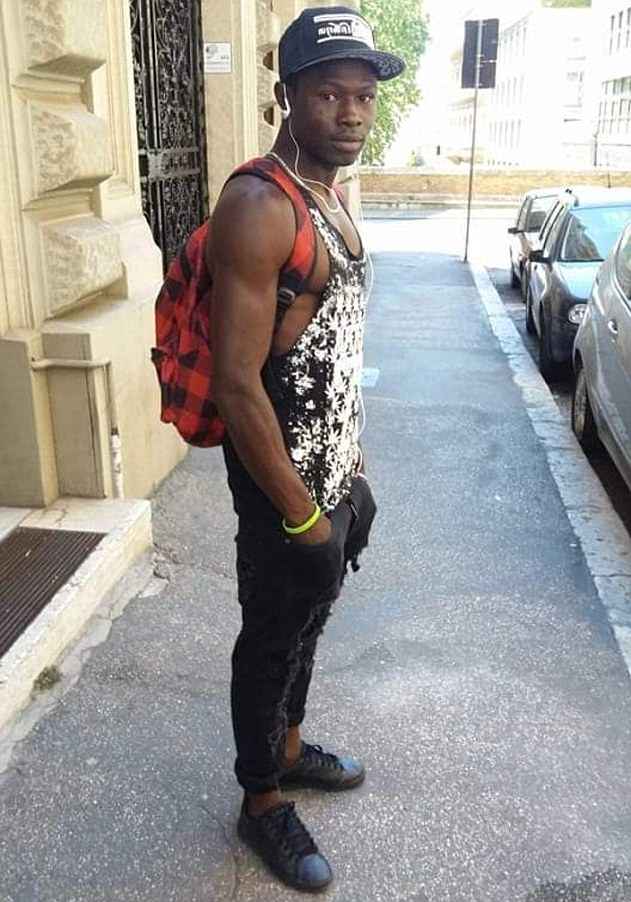 ‘Luckily, there was someone who was physically fit and who had the courage to go and get the child,’ a fire service spokesman told AFP.

Paris mayor Anne Hidalgo praised the young migrant on Twitter for his ‘act of bravery’ as well as phoning him personally to ‘thank him warmly’.

‘He explained to me that he had arrived from Mali a few months ago dreaming of building his life here.

‘I told him that his heroic act is an example to all citizens and that the city of Paris will obviously be very keen to support him in his efforts to settle in France,’ she added. 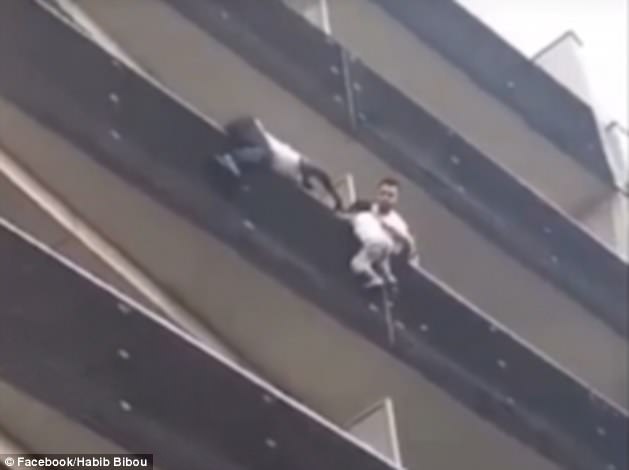 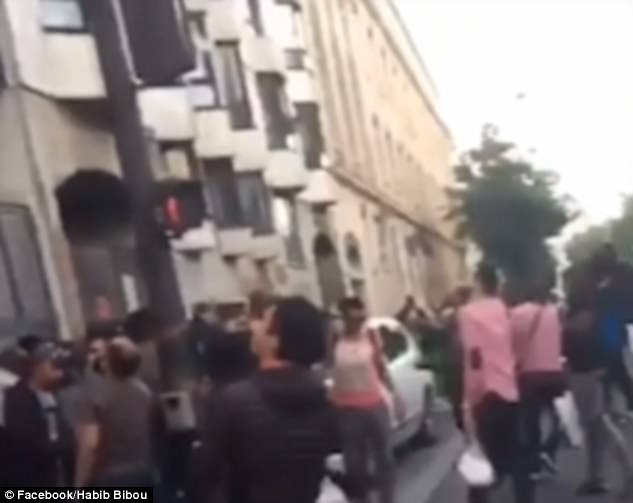 Tracked down by reporters 24 hours after the heroic rescue, Gassama said he had acted without thinking.

‘I saw all these people shouting, and cars sounding their horns. I climbed up like that and, thank God, I saved the child,’ he said.

‘I felt afraid when I saved the child… (when) we went into the living room, I started to shake, I could hardly stand up, I had to sit down,’ he added.

According to initial inquiries by the authorities, the child’s parents were not at home at the time.

The father was later held for questioning by police for having left his child unattended and was due in court later, a judicial source said. The child’s mother was not in Paris at the time.

Gassama’s story instantly drew comparisons with that of another Malian migrant who was feted as a hero, and given citizenship, for helping save lives during a January 2015 terror attack.

Lassana Bathily helped hide hostages in the freezer during an Islamist jihadi attack on a Jewish supermarket, in which four people were killed.