A 200-strong force of FBI and Italian police targeted the New York Gambino family and the Sicilian Inzerillo Mafia clans during dawn raids this morning in Sicily.

Eighteen suspected gangsters were arrested in Palermo, including Salvatore Gambino, the mayor of the Sicilian town of Torretta, while another was detained in New York.

The crackdown comes as police say the Inzerillo clan are seeking to re-establish their old power-base in Sicily with the backing of their Gambino allies in New York.

Two of those arrested – Francesco and Tommaso Inzerillo – are the brother and cousin respectively of Totuccio Inzerillo, a don who was murdered in a vicious war in the 1980s as his family went into self-imposed exile in the US.

Suspect Rosario Gambino, wearing shades and a Ralph Lauren shirt, is taken into custody during an anti-mafia operation lead by the Italian Police and the FBI in Palermo, Southern Italy on Wednesday morning 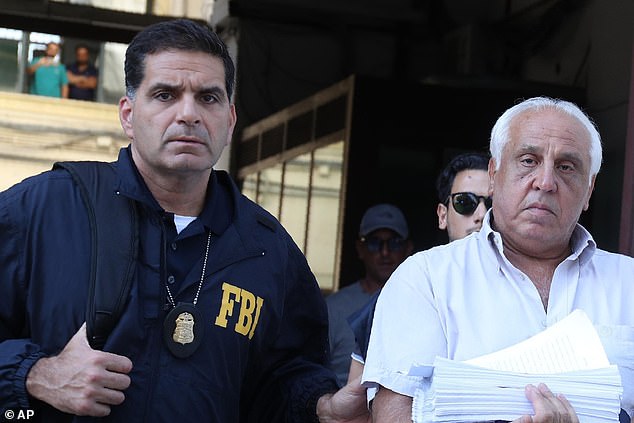 An FBI agent escorts Tommaso Inzerillo after operation codenamed ‘New Connection’ made sweeping arrests this morning – he is the cousin of Totuccio Inzerillo, a mob boss who was murdered in a ferocious mafia war in the 1980s 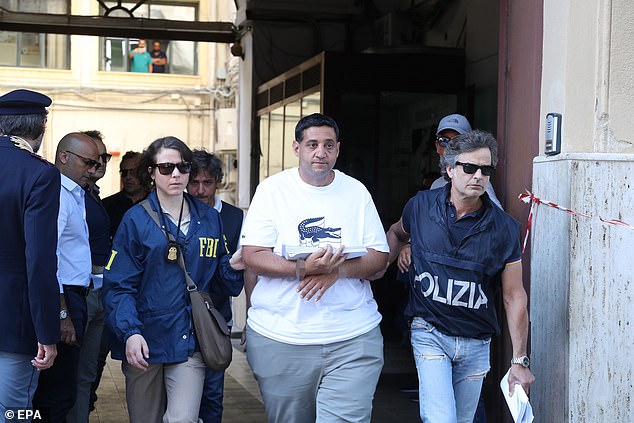 Two police officers escort Thomas Gambino, including one from the FBI, in this morning’s operation 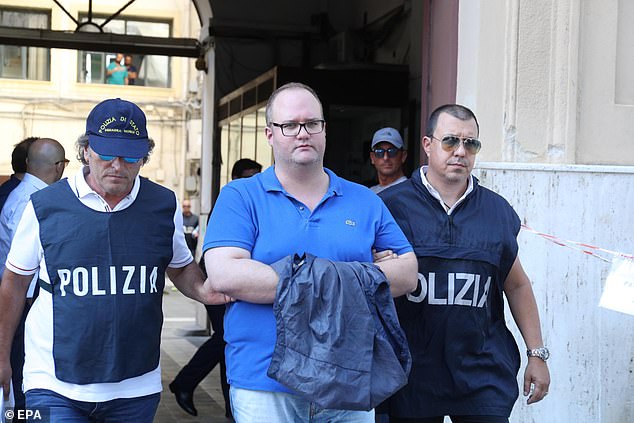 Salvatore Gambino, mayor of the Sicilian town of Torreta, is escorted by police officers on Wednesday morning 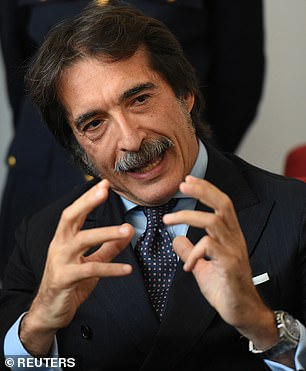 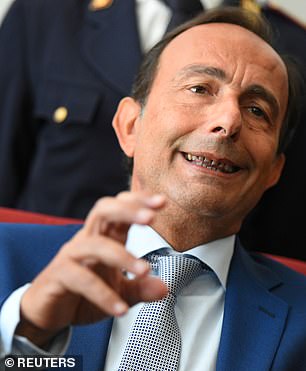 Salvatore ‘Toto’ Riina launched a bloodbath on the Mediterranean island in the 1980s, forcing the Inzerillo family to flee as Riina took over Sicily.

But Riina’s old empire has been in turmoil since he died in prison in 2017 after spending almost a quarter of century behind bars.

The Inzerillo family has since looked to reclaim its old business, police said, helped by strong allies in New York.

Around £2.7million in real estate and other assets were seized by Italian authorities, CNN reported. 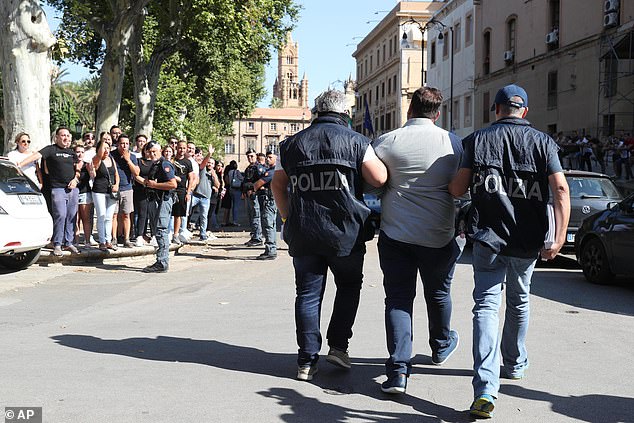 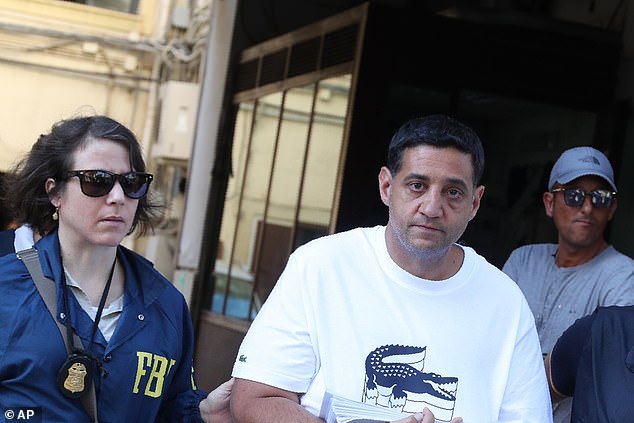 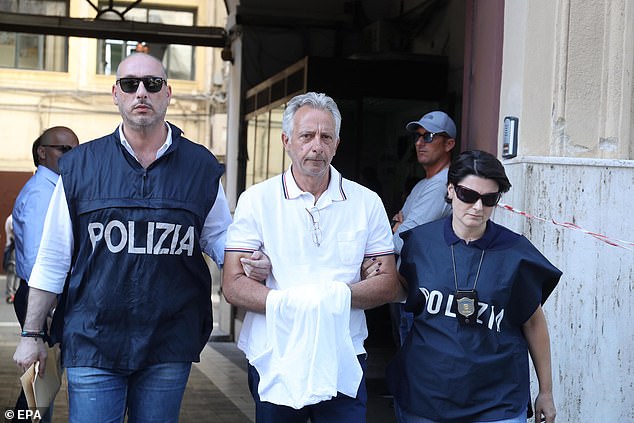 A suspected gangster, Francesco Inzerillo, is hauled away by police officers this morning in the massive operation – he is the brother of Totuccio Inzerillo, a mob boss who was murdered by Riina’s men in the 1980s 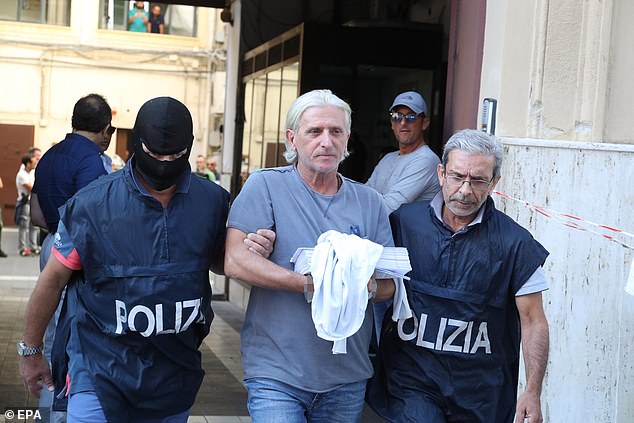 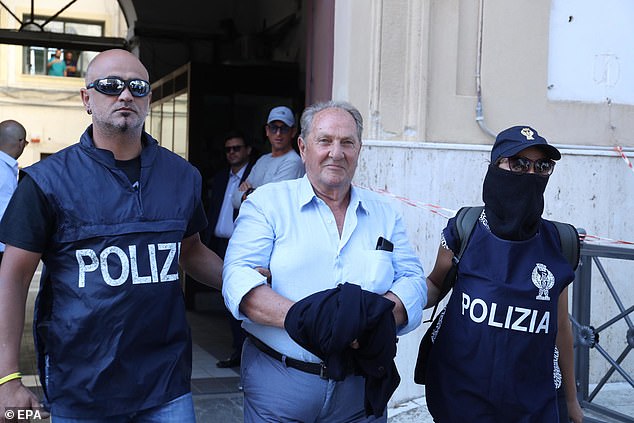 Over three decades of Mafia peace were blown apart by the murder of Gambino crime lord, Francesco ‘Franky Boy’ Cali earlier this year in New York.

The 53-year-old was shot six times and run over by a truck outside his house in the leafy Todt Hill neighbourhood of Staten Island on the night of March 13.

His wife and young children were inside the house and one man, believed to be a family member, ran outside, collapsed and cried, ‘Papa! Papa!’

Cali’s murder was the first hit on a Mafia boss since John Gotti arranged the assassination of then-Gambino head Paul Castellano in 1985. 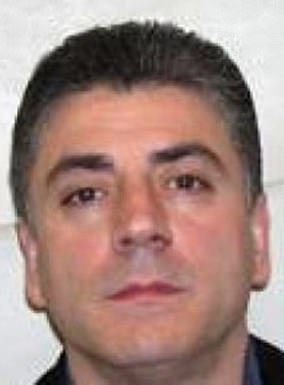 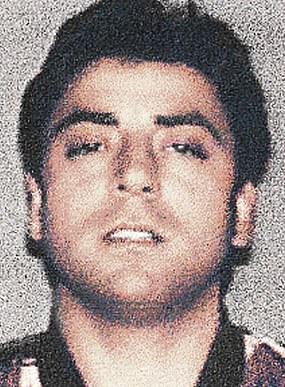 He served on the family’s ruling panel for several years before being promoted to acting boss in 2015, replacing the previous leader Domenico Cefalu, also known as ‘Greaseball’.

The organisation reportedly focused its efforts on heroin and Oxycontin trafficking under his leadership.

Among law enforcement officials, Cali was known as a ‘real quiet old-school boss.’ 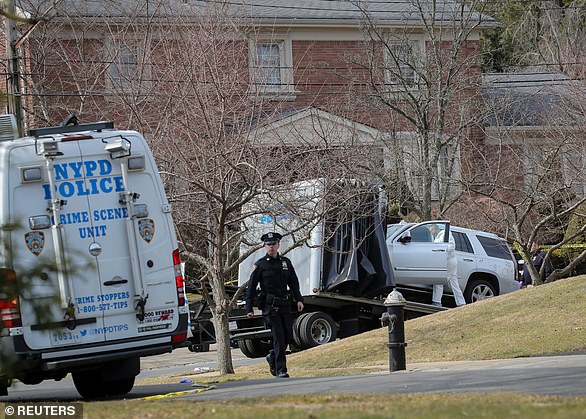 He was considered to be a foil of his former boss John Gotti because ‘no one ever sees him’.

Cali only had one criminal conviction, having spent 16 months for a 2008 federal extortion charge in connection with a failed bit to build a NASCAR race track in Staten Island.

The Gambino crime operation is one of the five historic Italian-American Mafia families in New York.

The reported crime boss of the family, Francesco ‘Franky Boy’ Cali, was gunned down in front of his Staten Island home in March. It was not clear if his murder had anything to do with tensions in Sicily. 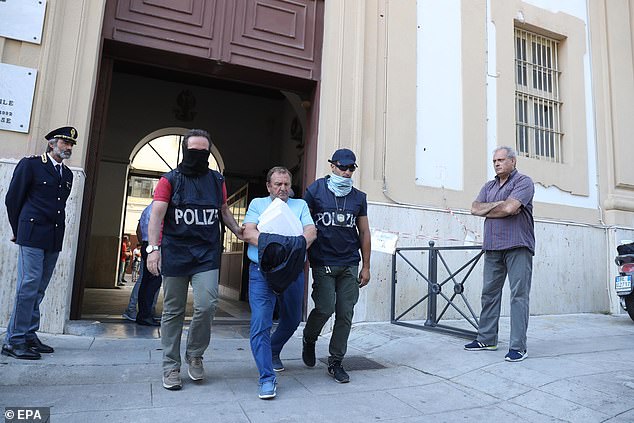 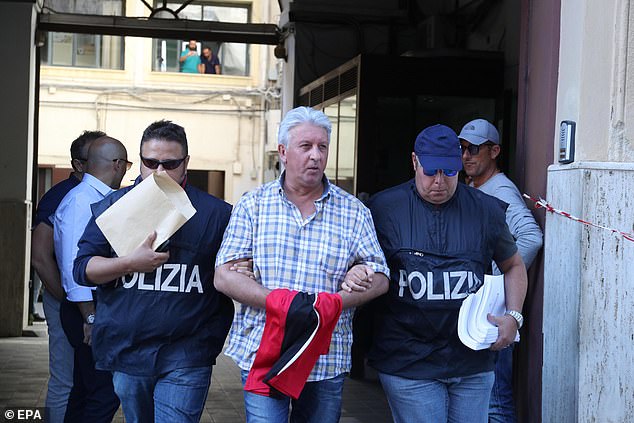 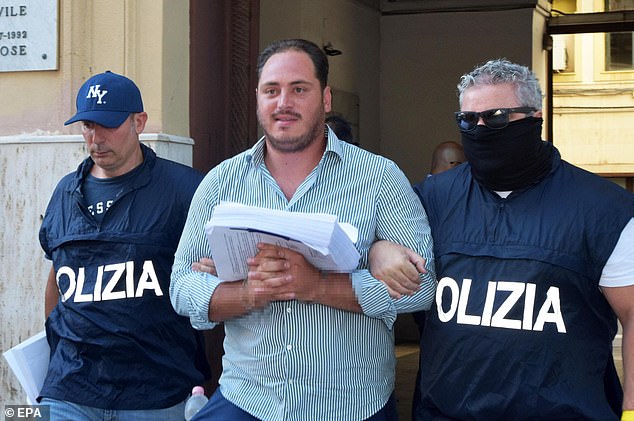 Antonino Fanara dressed in a green-striped shirt is lead away this morning by two officers, one wearing a mask and sunglasses 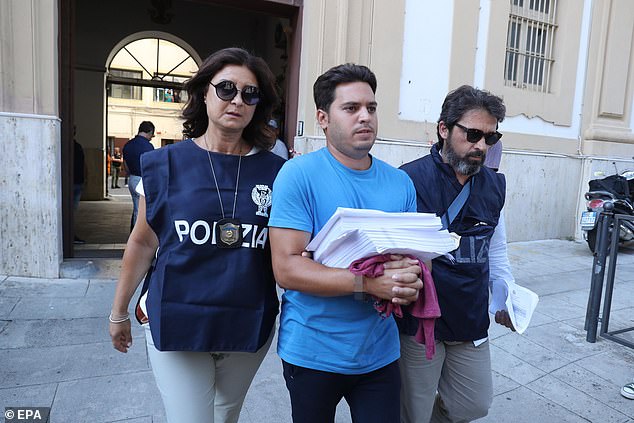 Gabriele Militello is taken in by police officers this morning, in an operation involving a joint task force of 200 officers 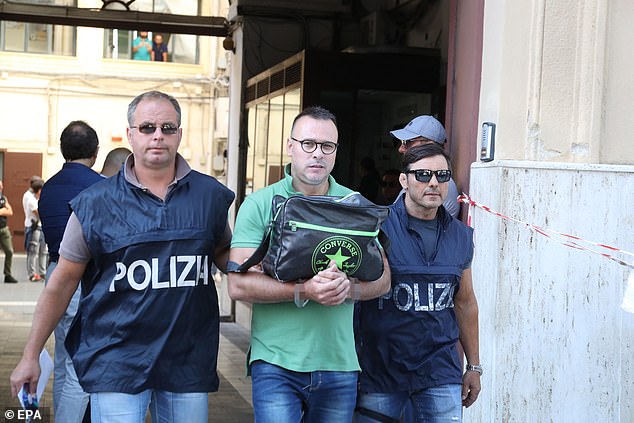 Italian police said the suspects arrested on Wednesday faced a string of charges, including membership of the mafia, aggravated extortion, fraud and ‘unfair competition’.

Once all-powerful on Sicily, the Cosa Nostra has been squeezed over the past two decades, with many bosses put behind bars, many of its businesses sequestered and many locals ready to defy it.

Despite these setbacks, prosecutors have warned repeatedly that the group is looking to rebuild.

The state’s fight against the Mafia got serious in 1992 after the group murdered two of Italy´s top magistrates, Giovanni Falcone and Paolo Borsellino, triggering national outrage and finally forcing complacent politicians to act. 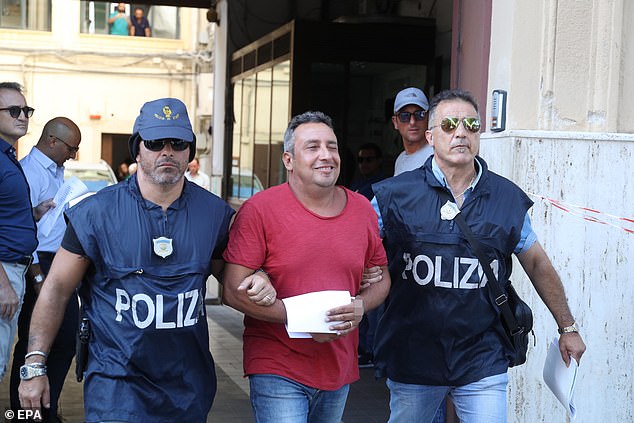 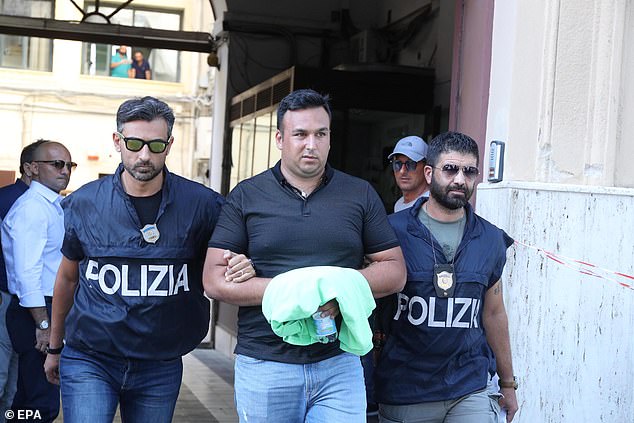 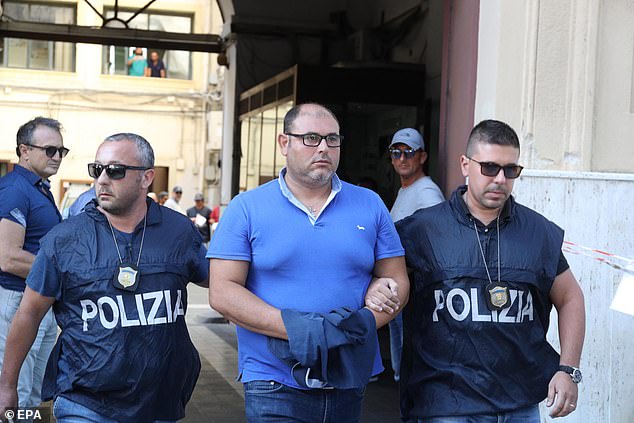 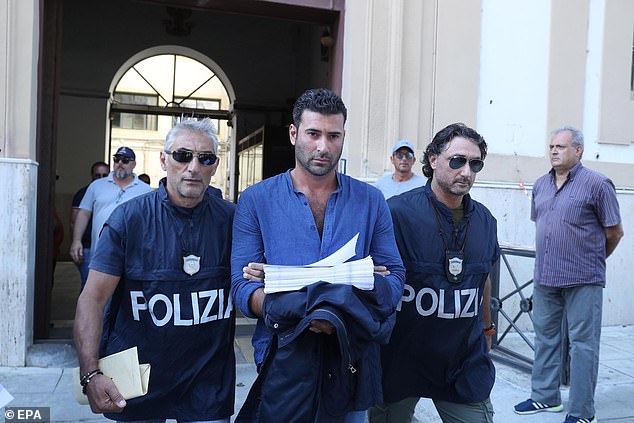 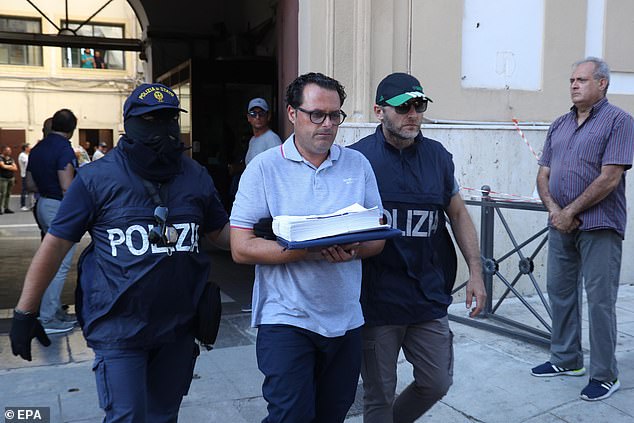