The FBI has issued advice to air passengers to help prevent sexual assault on planes.

FBI special agent David Gates, who is based at Los Angeles International Airport (LAX), said in an official release that the agency is seeing more reports of in-flight sexual assault than ever before with victims being as young as eight.

The agency’s tips include keeping the arm rest down at all times and never mixing alcohol with sleeping tablets.

It also recommends sticking to aisle seats where there is greater visibility. Agents say that parents arranging flights for unaccompanied minors should especially take note of this tip.

Sexual assault aboard aircraft – which usually takes the form of unwanted touching – is a felony that can land offenders in prison.

The FBI says that typically men are the perpetrators, and women and unaccompanied minors are the victims.

In fiscal year 2014, 38 cases of in-flight sexual assault were reported to the FBI.

In the last fiscal year, that number increased to 63 reported cases.

‘It’s safe to say that many incidents occur that are not reported,’ said Gates, one of the FBI’s many airport liaison agents assigned to the nearly 450 U.S. aviation facilities.

THE FBI’S TIPS TO AVOIDING SEXUAL ASSAULT ON FLIGHTS

Trust your gut: Offenders will often test their victims, sometimes pretending to brush against them to see how they react or if they wake up. ‘Don’t give them the benefit of the doubt,’ special agent David Gates says. If such behavior occurs, reprimand the person immediately, and consider asking to be moved to another seat.

Create a barrier: If your seatmate is a stranger, no matter how polite he or she may seem, keep the armrest between you down.

Choose an aisle seat: If you are arranging for a child to fly unaccompanied, try to reserve an aisle seat so flight attendants can keep a closer watch on them. The FBI has seen victims as young as eight years old.

Report it: If an incident happens, report it immediately to the flight crew and ask that they record the attacker’s identity and report the incident. ‘Flight attendants and captains represent authority on the plane,’ Gates said. ‘We don’t want them to be police officers, but they can alert law enforcement, and they can sometimes deal with the problem in the air.’ The flight crew can also put the offender on notice, which might prevent further problems.

Crimes aboard aircraft fall within the FBI’s jurisdiction, and in the case of in-flight sexual assaults, agents describe elements of these crimes as being strikingly similar.

The attacks generally occur on long-haul flights when the cabin is dark. The victims are usually in middle or window seats, sleeping, and covered with a blanket or jacket.

They report waking up to their seatmate’s hands inside their clothing or underwear.

One victim, a mother of two who was attacked in 2016 on a flight from the West Coast to Africa via Europe, recounted her ordeal.

‘I fly overseas often,’ she said. ‘The flights usually leave around 6pm I have dinner, watch a movie, and go to sleep. I was dozing off toward the end of the movie, and all of a sudden I felt a hand in my crotch.’ 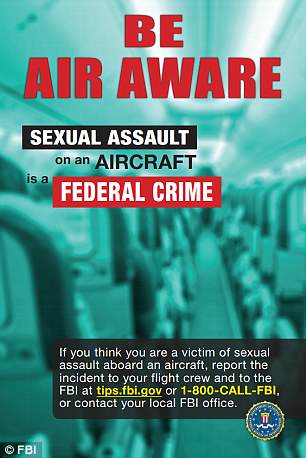 The woman instinctively said, ‘No!’ and pushed the man’s hand away, but he came at her two more times before she was able to remove her seatbelt and get away, even as her attacker used the full weight of his body trying to detain her.

As the assault was happening, she recalled, ‘it didn’t make sense to me. It was all so disorienting and confusing’.

She ran toward the bathroom. Seeing her condition, passengers thought she was experiencing a medical emergency. Barely able to breathe, the woman explained what had happened and that she needed a flight attendant.

After the crew responded, while she was waiting to be reseated away from her attacker, she was told by members of the crew that sexual assaults in the air were fairly common. One sympathetic flight attendant said that she, too, had been groped in the past.

‘I was horrified,’ the veteran flyer remembered thinking. ‘How can this be and I have never heard about it?’

‘Unfortunately, people don’t think things like this happen on airplanes,’ said Caryn Highley, a special agent in the FBI’s Seattle Division who investigates crimes aboard aircraft.

‘There is a perception on an airplane that you’re in a bubble of safety,’ Highley concluded.

The FBI has launched a poster as part of its campaign to fight in-flight sexual assault, urging passengers to report any incidents by visiting tips.fbi.gov, calling 1-800-CALL-FBI, or visiting a local FBI office.

Nearly 70 per cent of flight attendants say they have been sexually harassed while doing their jobs, a survey recently revealed.

The research also showed that one-in-three cabin crew had experienced verbal sexual harassment while one in five said they had been physically sexually harassed such as being groped, slapped or grabbed in the past year alone.

Meanwhile despite the prominent #MeToo movement, 68 per cent of flight attendants say there have been no efforts by airlines to address workplace harassment in the last year.

The study was the first of its kind to be carried out by US union the Association of Flight Attendants-CWA (AFA).

The survey quizzed 3,500 flight attendants from 29 US airlines with 80 per cent of the respondents women and 20 per cent men.

It revealed that 69 per cent said they had experienced sexual harassment during their flying careers.

In terms of verbal sexual harassment, 35 per cent said they had faced it in the past year, and of those, 68 per cent had faced it three or more times.

Some also reported being subjected to passengers’ explicit sexual fantasies, propositions, request for sexual ‘favours’ and pornographic videos and pictures.

And most said that the most common response to this was to ignore the passenger for the rest of the flight.