There are grave concerns for how coronavirus will affect members of New York’s Orthodox Jewish communities because many are refusing to stay away from one another and adhere to social distancing laws.

In Brooklyn, the worst hit counties are those with some of the largest Hasidic Jewish population.

Rockland County which is 25 miles outside the city, has 13,506 cases of the virus and 135 people have died from it. The county population is 328,868 and there is a large Orthodox community there; according to The Wall Street Journal in 2014, there were 60,000 Hasidic Jews living in the county’s towns.

It has the highest per capita coronavirus rate of anywhere in the state of New York.

In Williamsburg and Borough Park – two other Brooklyn neighborhoods – hundreds continue to flout social distancing rules to attend funerals for people whose lives the virus has claimed.

Both Williamsburg and Borough Park have more than 556 cases of infection and it may go as high as more than 1,600, according to New York City health data released on Tuesday.

On Sunday, the NYPD attended one funeral in Borough Park to beg mourners to stay 6ft apart or wear masks and gloves. Local reports say they were ignored.

Hours later, hundreds more piled into the street to attend a different funeral for a rabbi. They too were met by police who blared sirens, but they did not disperse.

While community leaders say it is only a small population that are ignoring public health advice, their continued gatherings are ‘maddening’ to lawmakers who say they are putting their lives and the lives of hundreds of others at risk by continuing to come together.

‘By going to these funerals and being in close proximity to one another, they are going to condemn another person to go into the ground

Some fear there may also be a spike as Passover, which began on Wednesday, gets underway.

It is not the first time a public health scare has sparked controversy among the communities and discussions of anti-Semitism.

Last year, when a measles outbreak tore through Brooklyn, it was largely attributed to Hasidic Jews who do not vaccinate their children.

Unlike the measles, there is no vaccine for coronavirus, some have pointed out.

‘Here’s the thing: A 30 percent spike in cases in coronavirus is going to mean dead people

‘This is not the measles, where at least you had immunization,’ Ed Day, the Republican county executive in Rockland, told The New York Times on Wednesday, calling the situation ‘maddening’.

‘By going to these funerals and being in close proximity to one another, they are going to condemn another person to go into the ground,’ he said.

Some members of the community have claimed anti-semitism and say there is only  a small percentage of Jews flouting the rules.

Aaron Weider, who is a legislator in Rockland County, has repeatedly accused Day of ‘attacking’ Jews.

He has pleaded with residents to stay home and save each other’s lives.

Some fear the message is not being delivered to ultra-Orthodox communities. 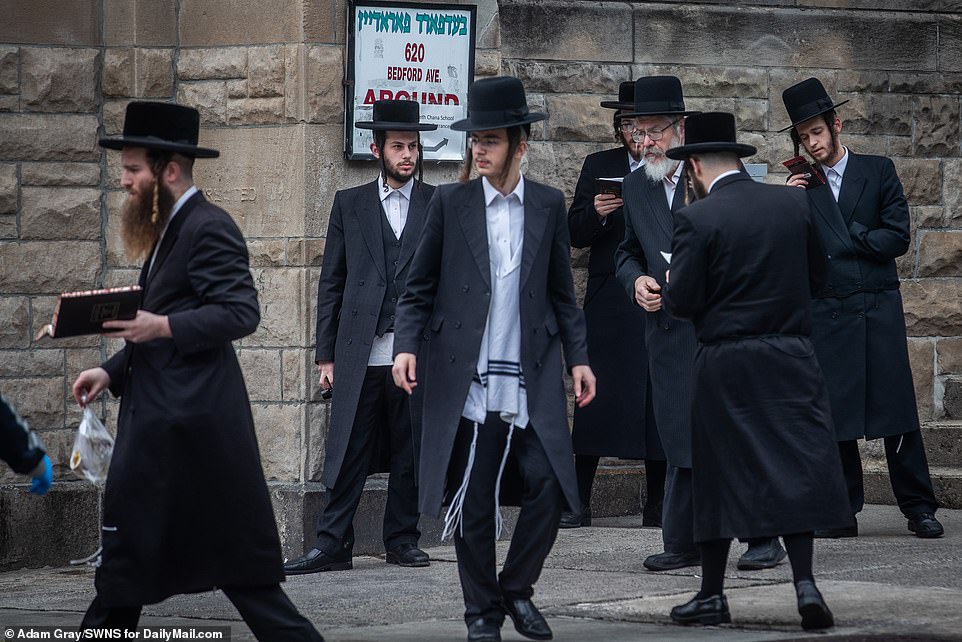 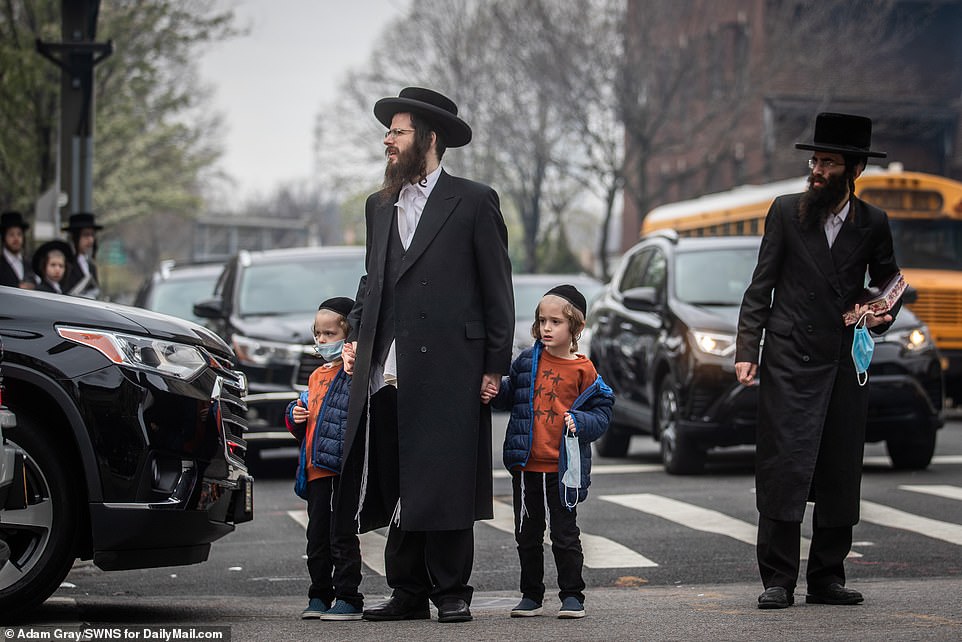 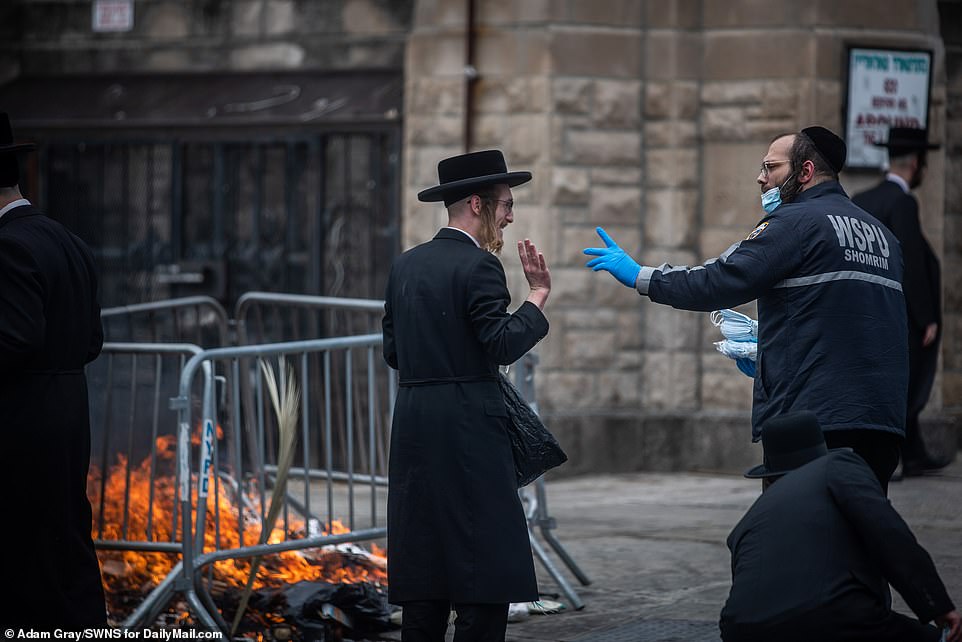 There were law enforcement present trying to break up the crowds 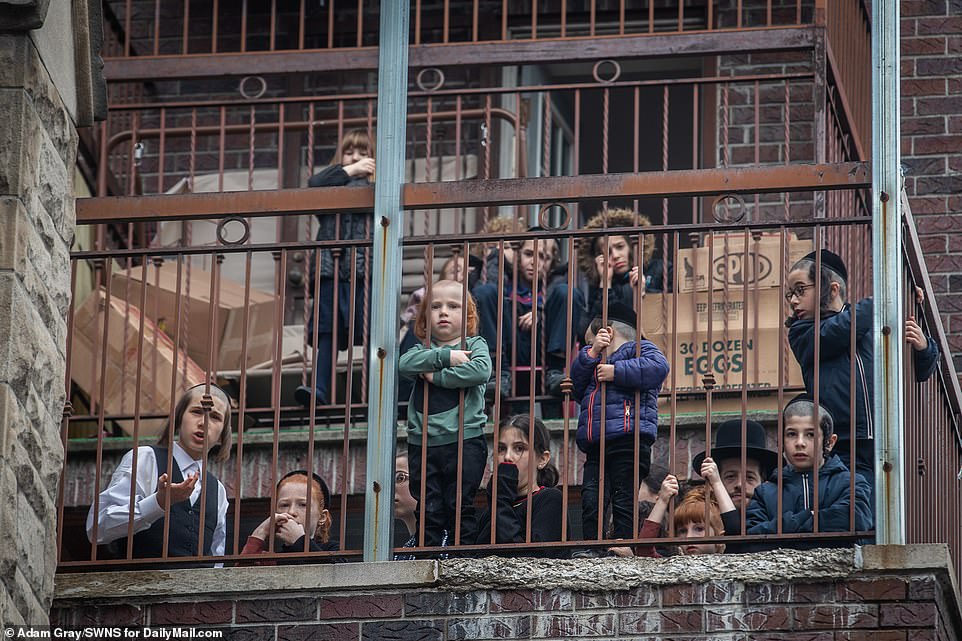 ‘People are being told to not do some things they have done their whole life.

‘Some people, there’s just no changing them,’ Naftali Wagshal, a 35-year-old man who lives in Monsey, Rockland County, told the Times.

New York Gov. Andrew Cuomo said on Tuesday, during his daily briefing on COVID-19, that he understood and sympathized with the communities and their desire to bury loved ones but that ‘now is not the time’.

He is urging NYPD officers to be more aggressive in breaking up religious gatherings of all denominations, including Orthodox Jewish funerals.

Rabbis in some communities are pleading with their congregations to embrace social distancing. 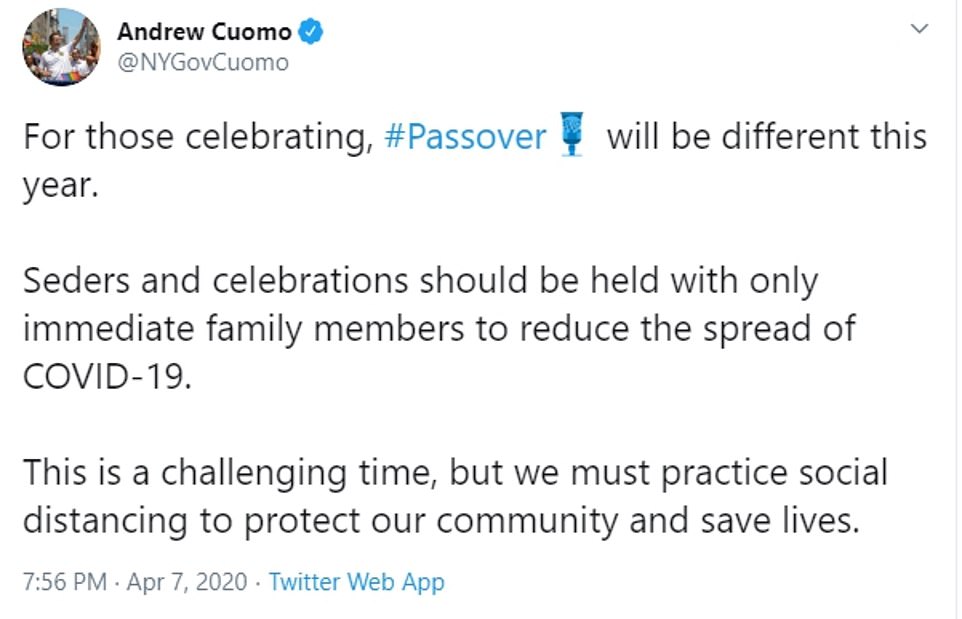 Gov. Andrew Cuomo pleaded with people to stay at home during Passover to stop the virus spreading 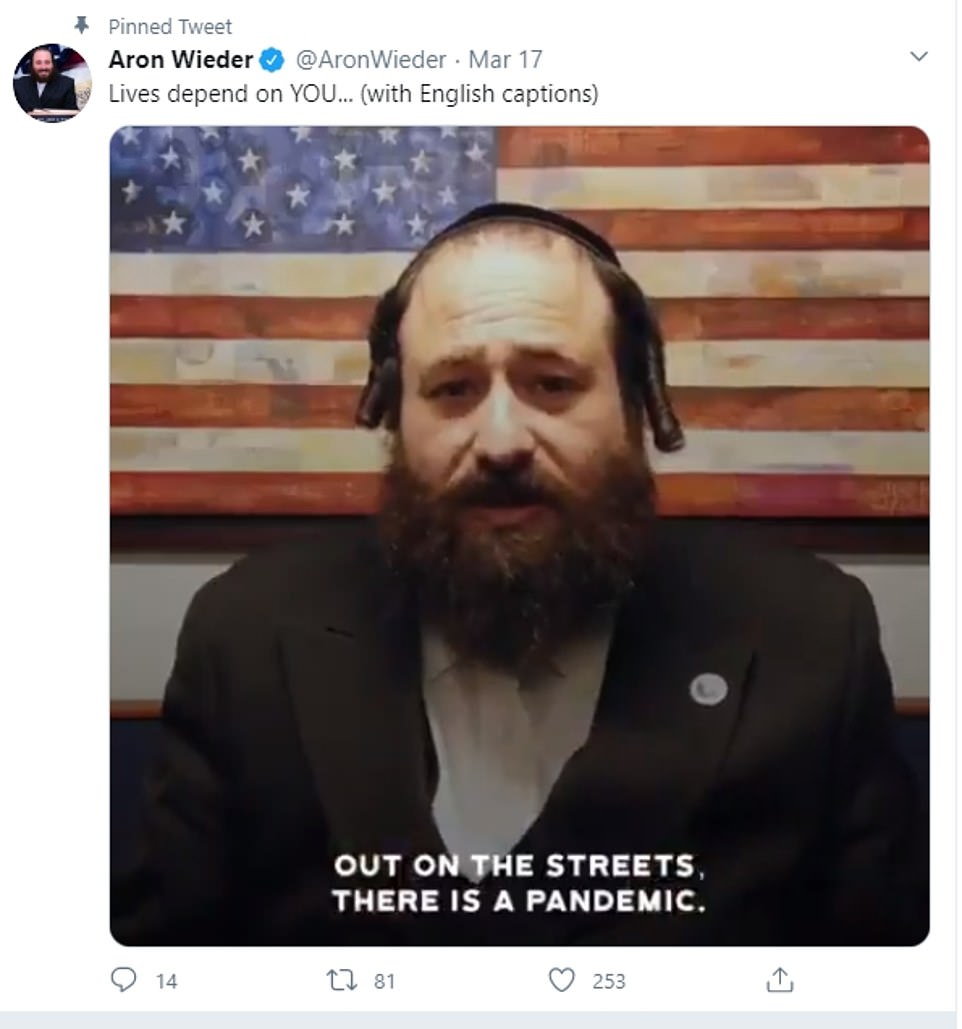 Aron Wieder, a legislator in Rockland County which is the worst hit in New York state in terms of per capita infections, is pleading with people to stay home 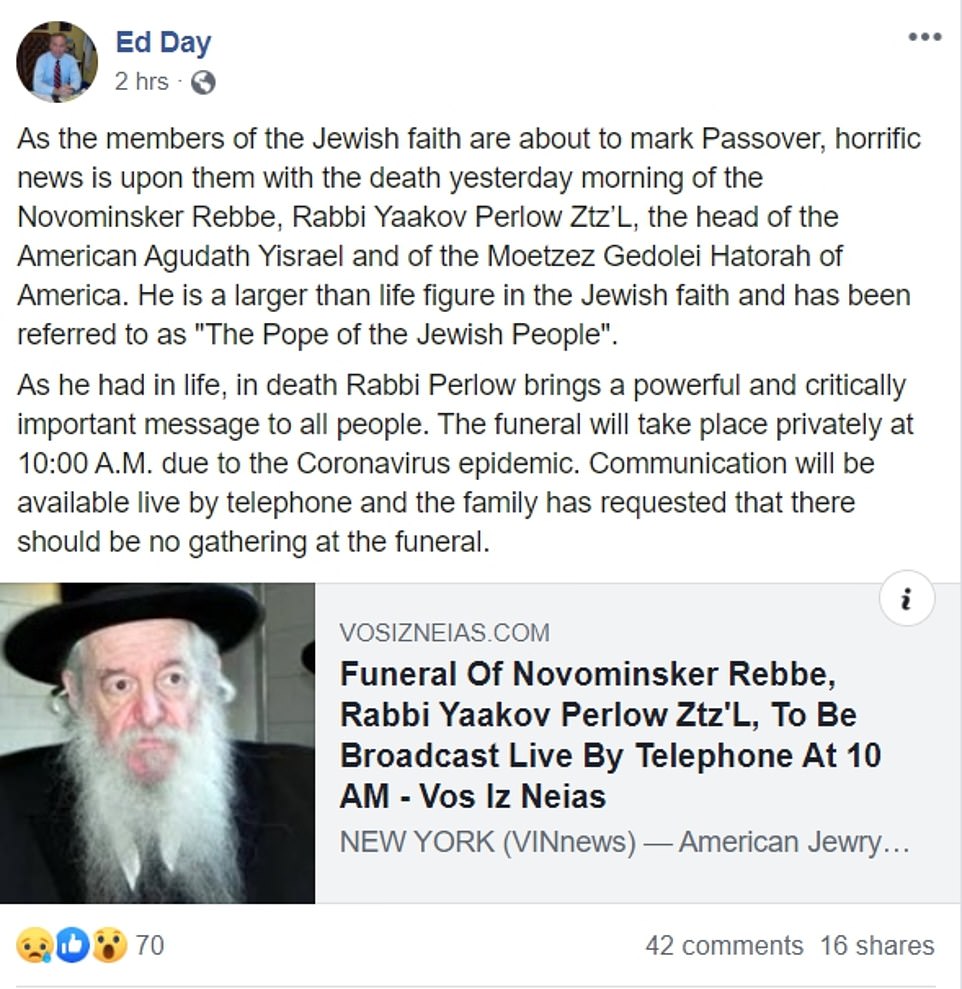 Ed Day, Rockland County Executive, has been accused of ‘attacking’ the Jewish community there by pleading with them to stay home

Rabbi Rick Jacobs, the president of the Union for Reform Judaism, said in a letter: ‘As the global pandemic of COVID-19 changes life on planet Earth, there is simply no way that our holiday observance could resemble years past.

‘Physical distancing, sheltering-in-place, and pervasive fears are significant obstacles to making Pesach happen at all, let alone embracing it as a time of joy and renewal.

‘We need this festival of liberation, now as much as ever… our doors been closed to preserve the health of those inside.

‘We can easily set another place at our virtual table.

‘This year, let us throw open the technological doors to our homes to all those who may be feeling lonely or isolated or who need the connection and spiritual renewal that our seder can provide.’

‘I had to cancel the St. Patrick’s Day Parade. You know a lot of people got offended at that, but you can’t have large gatherings where you could have one or two people infecting people.

‘And just because it is a religious gathering – you know, the virus is a nonreligious enemy.’

He has increased fines for individuals caught flouting the rules from $500 to $1,000 and is urging the NYPD and other local police departments to enforce them. 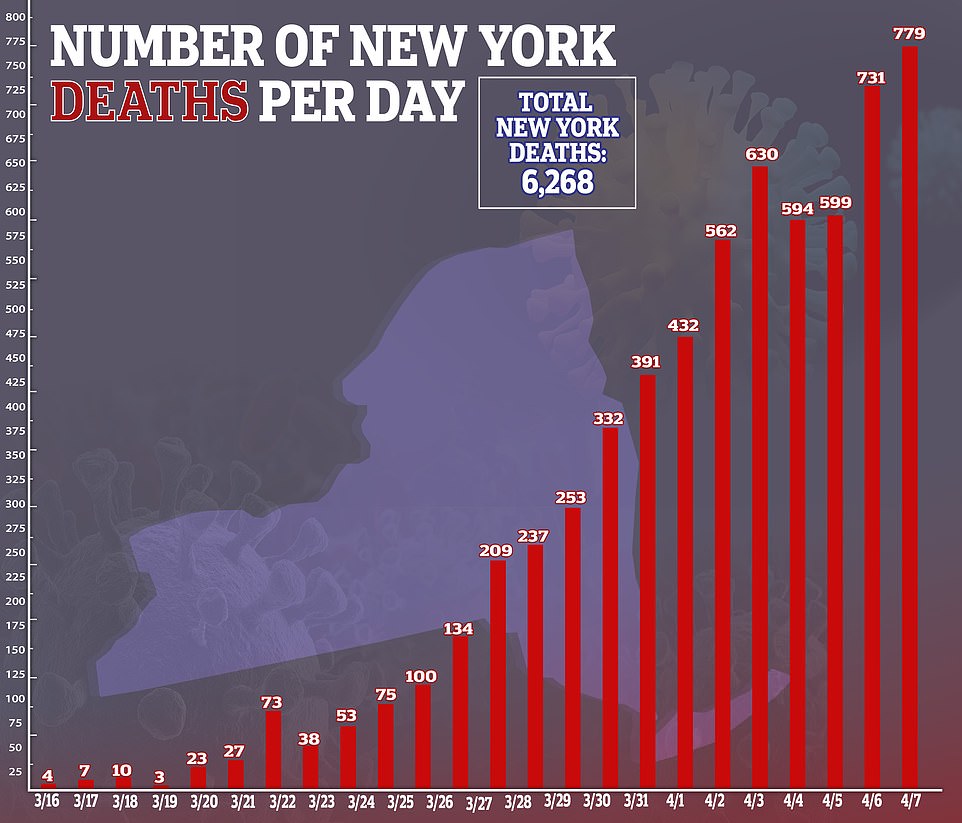 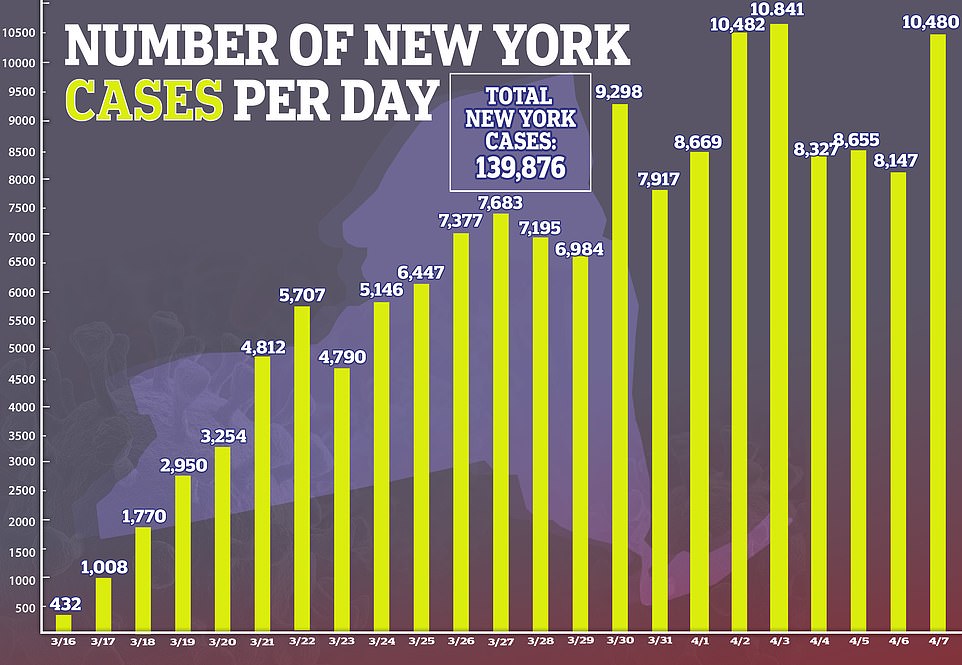