Firefighters are battling a blaze at a 230-year-old church this morning.

The fire broke out at The Bureau Centre for the Arts in Blackburn, Lancashire, at around 5.30am and ‘explosions’ were heard, according to reports on social media.

The art centre is based in the former Church of St John the Evangelist, which was built in July 1789 and is the oldest church in Blackburn.

Dean of Blackburn Cathedral Peter Howell-Jones shared a picture of the blaze on Twitter this morning.

Firefighters are battling a blaze, pictured, that broke out at The Bureau Centre for the Arts in Blackburn, housed in a 230-year-old church 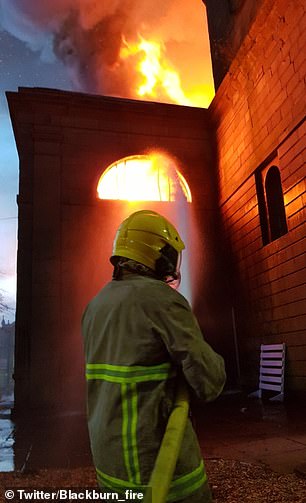 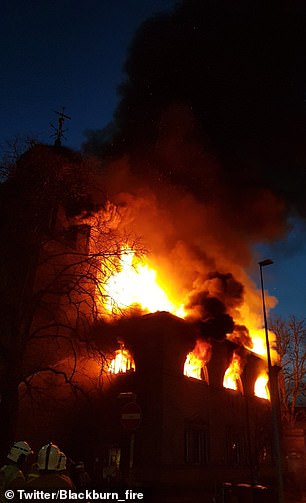 The blaze engulfed the building, pictured left and right, and it is unknown if anyone was inside

He wrote: ‘Very sad to see ⁦@BureauBlackburn⁩ on fire this morning. ⁦@BlackburnLife⁩ ⁦@Blackburn_BID ⁦@bbcathedral⁩ Just praying no one was hurt.’

It is unknown whether anyone was in the building when the fire broke out.