The historic Thameslink service from Peterborough to Horsham used an automated system to accelerate and brake as it travelled north to south through central London.

The technology allows trains to run more frequently by optimising their speed, but a driver remains in the cab to carry out safety checks and close the doors at stations. 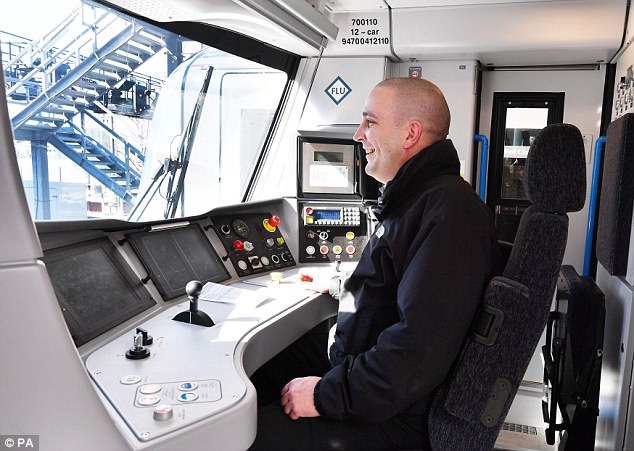 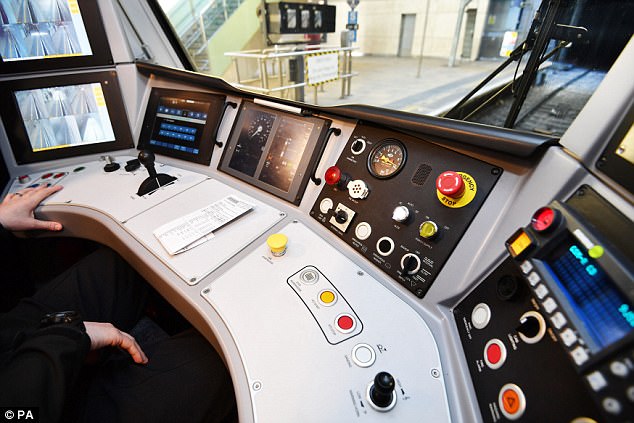 The 9.46am service from Peterborough to Horsham was a demonstration of the technology 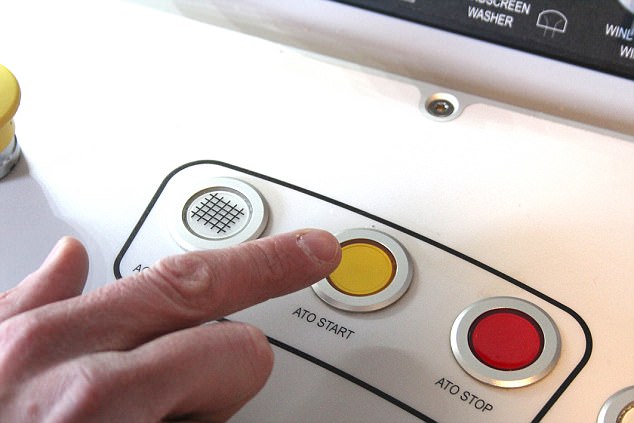 Today’s 9.46am service from Peterborough to Horsham was a demonstration of the technology being put into use as part of the £7billion Thameslink Programme.

A reporter from Modern Railways magazine was on board, tweeting that the train was ‘quite similar to the Victoria line’, but ‘more aggressive coming into platforms’.

The number of services between St Pancras and Blackfriars will gradually increase to 24 trains per hour in each direction by December next year.

This means there will be a train every two to three minutes, which is a frequency never previously achieved on Britain’s railways. 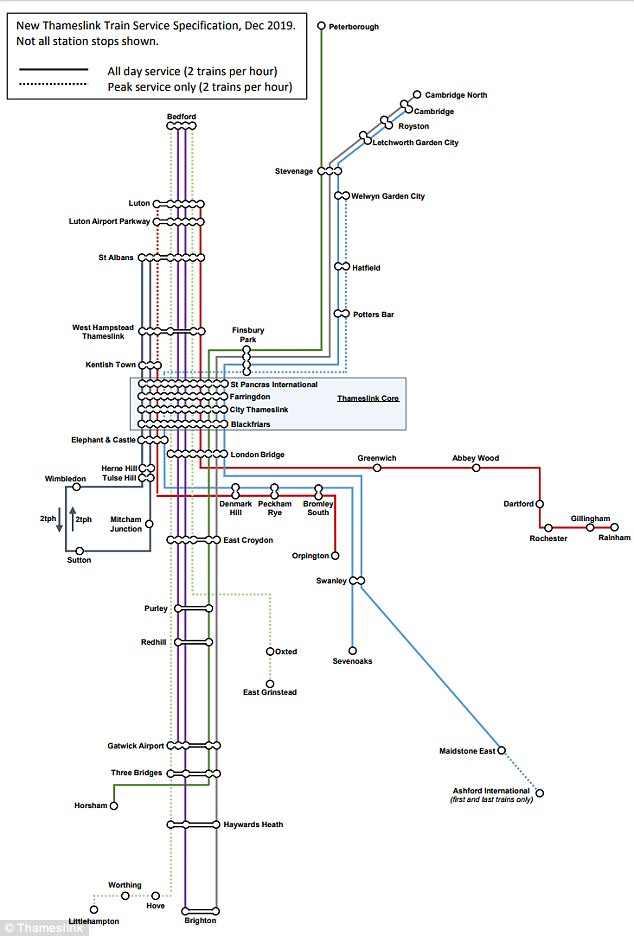 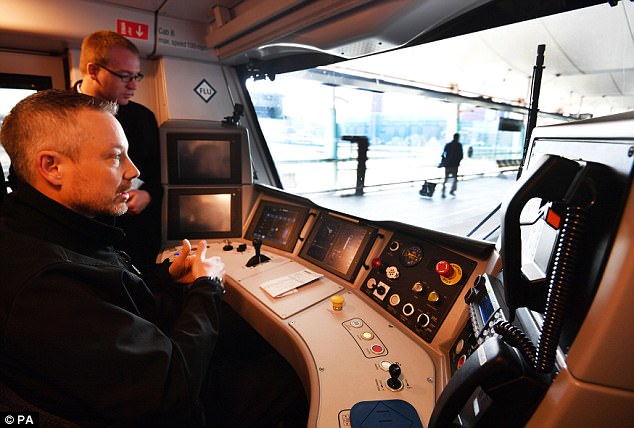 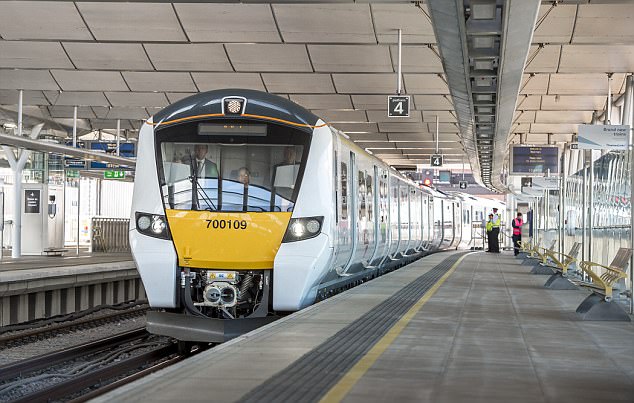 The Class 700 Thameslink trains will help create capacity for up to 60,000 more passengers 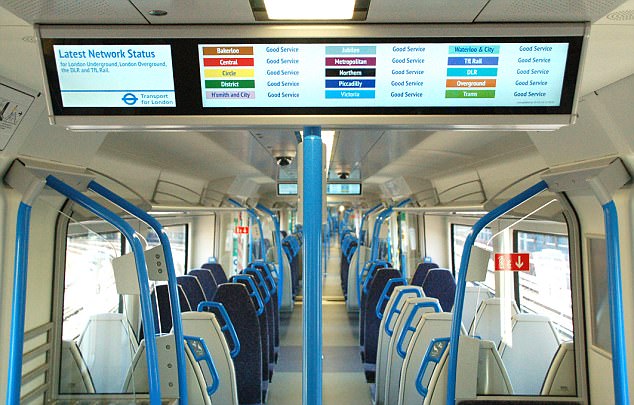 The new Class 700 Thameslink trains have faced varying complaints from passengers, with some saying the seats are too hard and others claiming they are too hot even in winter.

Passengers are even being encouraged to bring their own cushions on the trains after the seats were been likened to concrete.

The seats on the UK’s most expensive train carriage are covered with minimal padding and are less inclined than their predecessors.

But Shelley Atlas, chairman of Brighton Line Commuters, said: ‘It does seem like you’re sitting on concrete. They are really hard due to the lack of padding.’

And by 2021 more than 7,000 rail carriages across the country are expected to have the seats.

Robin Lansman, a former president of the Institute of Osteopathy, advised passengers to bring their own cushions to combat the discomfort.

Meanwhile rail passengers have also complained of ‘roasting’ hot temperatures on board the new trains.

Graham Palmer, from the South East Rail Group, said earlier this month: ‘If a train is heated at 28 or 29 or more and it’s delayed and crowded or even just crowded then there is an inevitability that people will be taken ill.’

The technology has been developed by Siemens and will operate on Network Rail’s new digital signalling system, serving 80 more stations on 12 separate routes.

Gerry McFadden, engineering director at Thameslink’s parent company Govia Thameslink Railway, said: ‘We are embracing digital technology to boost capacity through the heart of London, a historical bottleneck that has held back rail expansion across the south of the country.

‘Self-drive technology also has great potential for the rest of the country’s rail network, particularly on congested routes, and could in future reduce the need for costly infrastructure projects.’

‘We’ll always need a driver in the cab but this technology allows us to run more trains, more frequently than we could by driving the trains manually. For passengers, the trip will be as smooth as ever.’

The technology’s use on the Class 700 Thameslink trains will help create capacity for up to 40,000 more passengers at peak times by this May, and 60,000 by December next year.

The aim of the Thameslink Programme is to transform journeys on what was one of the country’s most congested sections of railway.

Mr McFadden added that the more frequent trains will allow the operator to add 80 more stations to the Thameslink network across the south and east of England.

The Siemens in-cab system is said to use optimum acceleration and braking on board the Class 700 trains while maintaining a smooth ride for passengers.

Mark Ferrer, digital rail operations director at Siemens, said: ‘This major milestone is the culmination of years spent testing in labs, on various test tracks and on the actual Thameslink Core with the new Class 700 Desiro City trains.’

How do the automatic trains work?

Automatic train operation (ATO) is a technology developed by Siemens that is said to use the optimum acceleration and brake rates given to the train.

ECTS overlays the existing system which can still be used as a backup. 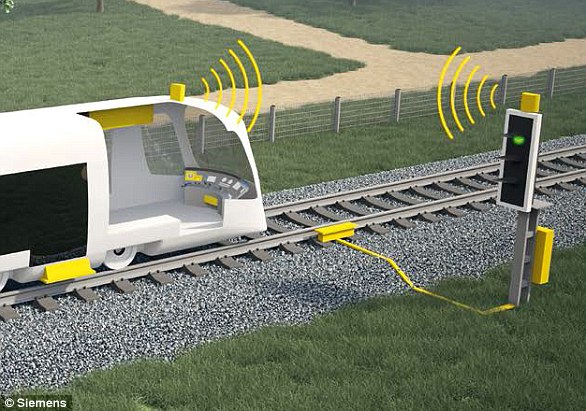 Under ATO, the driver presses a button and the system takes over, braking and accelerating before stopping the train and opening the doors.

The driver then checks the platform is clear, closes the doors and selects ATO again as they try to manage the overall safe operation of the train.

The ATO technology will allow the operator to run up to 24 trains every hour in the peak across the central section of the Thameslink route.

Govia Thameslink Railway was the first train operator in the world to operate ATO over ETCS, with ATO testing starting in November 2016.

ATO will initially operate between St Pancras and Blackfriars in May 2019, with 22 trains per hour, being extended to London Bridge in December 2019,