Sweden’s first military conscripts for a decade have begun training how to combat a Russian invasion amid fears that Putin could start a war in Europe.

Dozens of 19 and 20-year-olds drafted last summer took part in a live-fire exercise at the Ravlunda firing range last week, designed to simulate a Russian attack from the sea and air.

In total, 3,700 school leavers were called up to serve in summer 2018 after politicians voted to reintroduce national service the previous year.

Sweden began conscripting citizens into the armed forces in 2017 after abandoning the practice in 2010, and the first recruits have now begun training (file image) 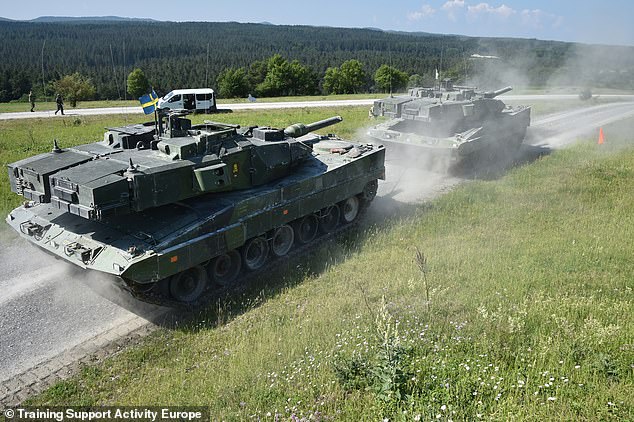 Army chiefs say the youngsters – who are 19 or 20 years old, having left school last year – lack the physical fitness of years gone by, but say they are glad to have extra numbers (file)

Captain Johan Ström told The Telegraph that the new recruits are not nearly as fit as the ones of yesteryear, but welcomed the extra numbers.

Sweden first introduced mandatory national service in 1901 but scrapped it in 2010, saying the move would increase the quality of recruits in the armed forces.

But in 2017 ministers reversed that decision, saying they had struggled to fill ranks amid increasingly aggressive Russian military drills in the Baltics.

Sweden selected the 3,700 new recruits from a pool of 94,000 school leavers after they volunteered and completed a test.

The first conscripts were operating CV9040 transport vehicles at the weekend, while identifying and firing at moving targets.

Evelina Loof, 19, the commander of one of the vehicles, said her job gave her a lot to think about on the battlefield.

‘You have to tell the driver where to drive and the gunner where to shoot, and at the same time, you have to report to the boss, so it’s a lot to think about,’ she said.

Sweden’s new conscription law is gender-neutral, meaning both men and women can be called upon to serve.

Describing the need for extra troops, Colonel Bo Stennabb added: When the wall came down, everybody thought we had entered an era of eternal peace. Not many people think that any more.

‘We’ve seen that Russia is prepared to use military means to accomplish political objectives, not just in Crimea but in Syria. 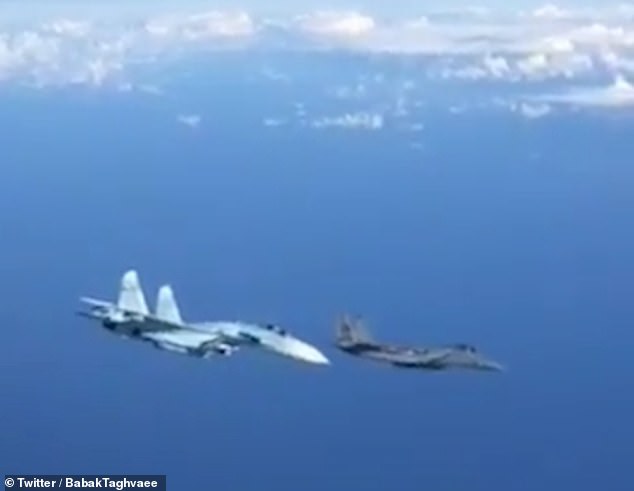 Conscription restarted amid fears of increased Russia aggression in Europe. Pictured, a Russian fighter jet ‘pushes’ an American jet out of the way above the Baltics 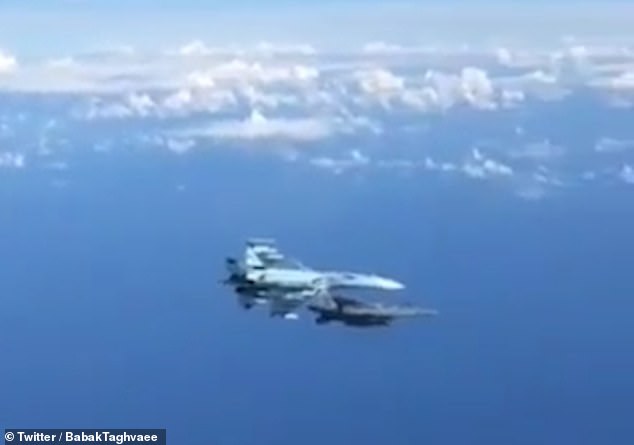 Russia has spent years investing in its military, including building new tanks, nukes and fighter jets while the rest of Europe has largely been left behind

‘We’ve seen a more aggressive behaviour by Russia in the Baltic. And there’s the rearmament that Russia is engaged in.’

Russia has invested a huge amount of money in updating its military in recent years, developing new tanks, nuclear missiles, and fighter jets.

The country has increased military spending every year since 1998, and in 2016 it spent the most out of any European country on defence.

In order to show off its new hardware it has held a series of elaborate training exercises, including the Zapad war games held in Belarus in 2017.

NATO chiefs warned at the time that Zapad – which means ‘west’ – was a rehearsal for the invasion of Europe, and may even have provided cover for an actual invasion – though none materialised.

Last year, Russia also held the Vostok games on its eastern border, coordinating with China to produce the largest games since the Soviet era.

Meanwhile Russia has also been launching incursions into European airspace, while becoming ever-more bullish about defending its own.

Just last week, a Russian Su-27 fighter was filmed ‘pushing’ an American F-15 out of the way as they patrolled over the Baltic Sea.

The US-made plane has no choice but to move out of the way as the Russian jet came within feet of hitting it.

The Pentagon said that a Russian jet came dangerously close to one of its fighters over the Black Sea on Monday.