I am the god of hellfire. And I bring you… turbot. All right, so it may not be The Crazy World Of Arthur Brown, but London is aflame. You can barely cross the road without being enveloped in a fragrant fug of apple wood, as restaurant after restaurant embrace the art of cooking over coals. There’s Sabor, with its traditional wood-fired oven, and the upcoming St Leonard, with its ‘hearth-roasted meat and fish’, and Nuala with its ‘fire pit’, and Inferno, with its diver-caught scallops roasted over wood taken from a genuine Varanasi pyre.

OK, that last one might be more fervent fantasy than fact, but flames are hot, hot, hot. And at Brat, the new restaurant from the very talented Tomos Parry, formerly head chef at Kitty Fisher’s, they don’t just have a wood grill but a wood-fired oven too. That extraction system sure has its work cut out. 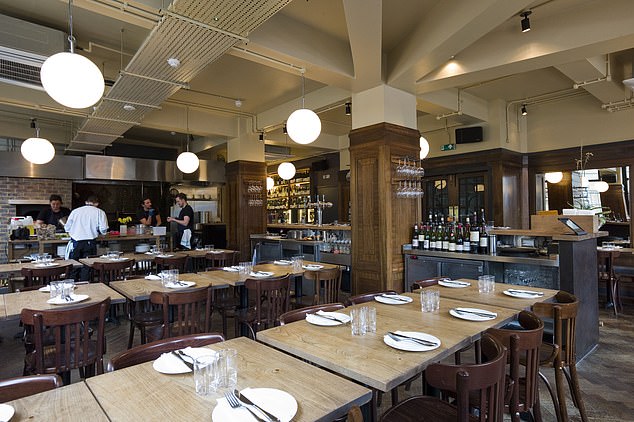 The room is packed, the tables crammed in hugger-mugger, the lighting dim and warm, with an open bar for walk-ins

The open kitchen is an integral part of the room, which is upstairs, and situated in a former strip club. Grace, my friend and fellow restaurant critic, said she once worked here. As a waitress. ‘It’s all a bit different now,’ she says, looking around at the wood-panelled walls, wine fridges, fish-shaped cooking racks and the jeunesse dorée of Shoreditch. She’s not wrong.

The room is packed, the tables crammed in hugger-mugger, the lighting dim and warm, with an open bar for walk-ins. Service is smiling and switched on, the chefs working with methodical intensity. There’s a languid, natural charm to the place, a feeling that here, food comes before posing. Napkins are resolutely paper, and the constant sizzle of fat on glowing ember gets the taste buds suitably priapic.

Turbot is one of the menu stars, cooked whole, and not exactly given away at £65. But for such an expensive fish, that’s not bad value. At all. The place is even named after this mighty piscine specimen (there was me thinking it was inspired by some whining, mewling and puking little tyke), so when Parry tells us he’s just sold the last one, mere minutes before, our faces drop.

But not for long. There’s blistered, puffy, buttery flatbread draped with the very sweetest of anchovies. And a chopped egg salad, lithe and lovely, topped with chewy, softly saline slices of really good bottarga. Such a simple dish, but beautifully done. Wild rabbit sausage, discreet and elegant, comes with squishy, muted black pudding and the most wonderful, garlicky white beans. A pair of langoustines, cooked so the flesh is still a touch translucent, are blessed with the merest of rosemary-scented chars.

Minuscule baby peas (fresh in from Spain) sit in a delicate, pellucid broth, with a few slices of air-dried ham. Again, it’s a dish of great simplicity, but quiet brilliance. Cockles are the other extreme, big and bosky in a swaggering chicken liver sauce. This kitchen is just as adept with the strident as it is with the subtle. Grilled leeks come with a lactic puddle of fresh cheese, while spider crab (surely the first of the season) is tumbled with crunchy cabbage and fennel. The textures delight, but you never forget that the crab is the boss.

Even the side orders impress. A joyous tomato salad, made with big, chewy globes, served at room temperature (hooray) and actually tasting of summer fruit. And smoked new potatoes, surprisingly delicate. Because when cooking over flame, there’s always the danger of overdoing things. Not just in the char, but the smoky flavour too. But Parry is a master, as seen at Kitty Fisher’s. His grilled Galician steak was sublime, and there’s a beef chop on the menu here too. But we order lemon sole. Grace, not easily impressed, is, well, impressed. So am I. Lemon sole is too often seen as the poor cousin of the more noble Dover. But when it’s this magnificently cooked, it’s a fish to worship and adore.

The flesh offers a moment of resistance before peeling away from the bone, succulent and kissed with the ethereal allure of the truly fresh. I don’t think I’ve eaten a fish this fine for years. Throw in a really interesting wine list (we had a bottle of Sicilian white, the grapes grown on the loftier extremes of Mount Etna), some damned good sherry (the Manzanilla is mega-yeasty) and the sort of atmosphere you want to gulp down in deep drafts, and you have a restaurant that gets it just right. I actually want to come back. And not just for that turbot. Parry has done it again. This Brat burns hot.

Back once again to Cheltenham Gold Cup Day. I don’t back the winner. Still, feast upon all manner of wonderful ham, salami and salad for lunch. Before returning to London to check out the new Annabel’s. Followed by a late-night shawarma at Maroush 2.

Chicken larb and Thai rare beef salad, made with a Hannan’s sirloin steak. Fierce and fantastic.

Oak WII with my son and dog. Diavolo pizza, plus tagliata. Most of which ends up in Snoop’s gob. For a change.

A pot of Itsu chicken noodles. And a new Spicy miso one. Which I was sent, and rather like. Plus baked beans, spiked with Tabasco and Worcestershire sauce and eaten cold, straight from the tin.