A woman in Florida has been arrested for lying on the beach as she was protesting its closure due to the coronavirus.

Kimberly Falkenstine, 33, was holding a sign that read ‘We are free’, authorities said, who arrested her on Sunday afternoon at Lummus Park beach in Miami, which was closed by an emergency order.

Falkenstine and a man named Chris Nelson, who filmed her act of protest, were both taking part in a wider protest in Lummus Park when she decided to leave the area and sit on the beach ‘to make a statement’ according to the arrest report.

Kimberly Falkenstine, 33, (pictured) was arrested for violating an emergency order by lying on a Miami beach holding a sign that read ‘we are free’, protesting the coronavirus measure

In the video, Falkenstine can be seen storming towards the beach holding her sign from the protest. While being filmed, she speaks to Nelson, explaining her reasoning as he can be heard encouraging her, calling her a ‘brave lady… who’s ready to make a statement’.

‘The time for acting is gone. They need to realize that if we rise up, we can strip their power like “that”‘ Falkenstine adds while clicking her fingers.

‘They need to think about that when they want to pretend like they’re our parent and take away the beach whenever they feel like it. That’s not fair,’ she concludes, to which Nelson replies: ‘Amen’.

Police said that she was approached by three officers who warned her that she was in violation of the city’s emergency coronavirus orders and gave her numerous chances to leave the closed beach.

In response, Falkenstine said: ‘The beach was for the public and it was her right to be there.’

Officers told her that if she refused to leave the beach, she would be arrested, but according to the report she told them that she was aware of the consequences and would not follow their orders to vacate the beach. 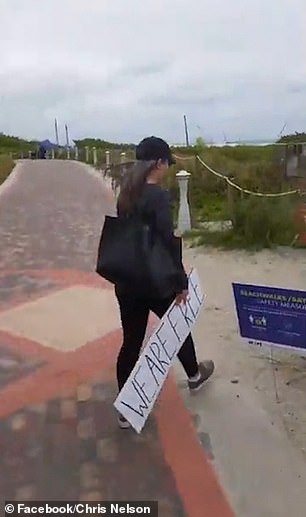 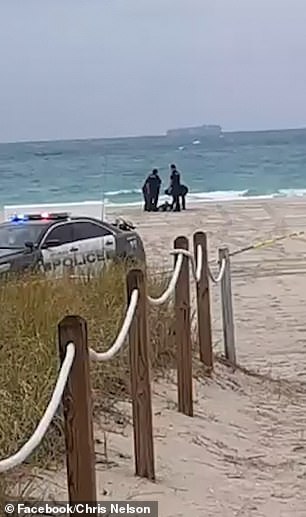 Kimberly Falkenstine is seen in the video storming towards the beach with her sign that says ‘we are free’ as she is encouraged by the person filming the video, Chris Nelson, who stayed back off the beach while he filmed from a distance as officers arrest Falkenstine (right)

When officers tried to take her into custody, the arrest report said that the woman ‘dropped her dead weight and refused to move.’

The police had to carry her to their vehicle and drove her to the Miami Beach police station.

As a result of her actions, Falkenstine faces several charges including resisting an officer without violence, trespassing and violating an emergency order. 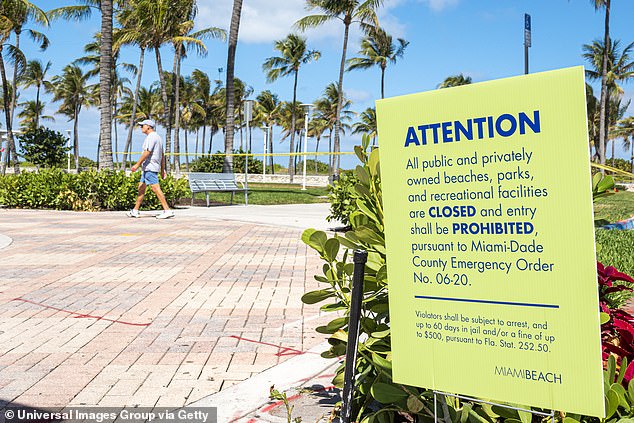 Lummus Park in Miami Beach, where the initial protest was taking place, was closed to the public by a Miami-Date County emergency order. The parks are now beginning to reopen

On Tuesday, government officials were finalizing plans for the partial reopening of Miami-Dade county, one of Florida’s worst coronavirus areas.

Dozens of people were seen enjoying Miami’s 82F weather as they strolled through South Pointe Park just a day after it reopened.

Officials said the park will only open on weekdays after it was closed due to overcrowding and issues with people not wearing face coverings.

Several sun-seekers appeared to be following social distancing guidelines. And while some wore masks, many people didn’t have their faces covered at all.

But Miami Beach Police said visitors at the park don’t need to wear a face mask as long as social distancing is adhered to. However, police encouraged park goers to still carry a face mask with them.

Photos showed several people relaxing in the park as they soaked up the sun. Some worked out and ran while others chit-chatted on the grass.

Florida has had nearly 42,000 confirmed cases of COVID-19 and 1,779 confirmed deaths from the disease since the first cases were reported in early March. 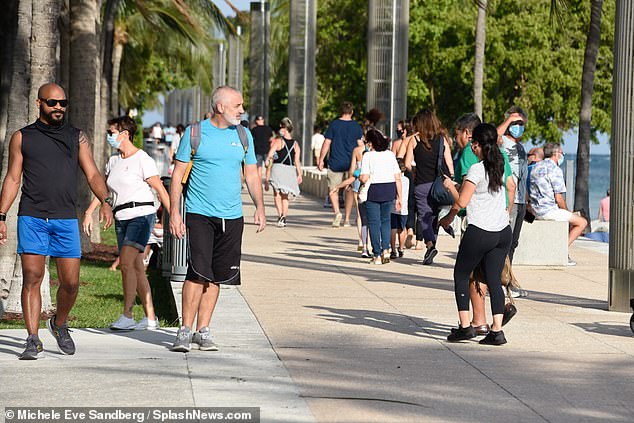 On Tuesday, parks began to reopen and people flooded back into them as officials said while people do not need to wear masks, it is advised that they carry one with them

Miami-Dade and Broward counties are also finishing preparations that would allow retailers, restaurants and personal care businesses such as barber shops and salons to reopen on Monday, about two months after they closed, Broward County Administrator Bertha Henry told her county commission on Tuesday.

The counties account for almost half of the state’s confirmed virus cases.

Broward commissioners urged caution about the reopening plan but generally agreed that the county’s economy needs to begin the process.

‘One of our responsibilities as leaders is not to lead people to their deaths,’ County Mayor Dale Holness said. No vote was taken on the plan. 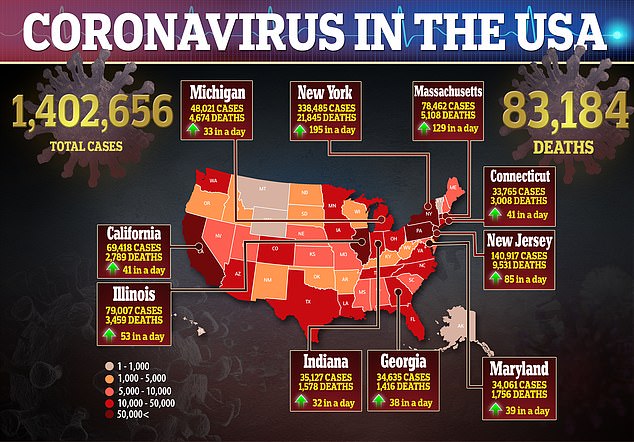