An irate Florida woman yelled at mask-wearing Walmart shoppers that they were ‘cult members’ after she was forced to leave for not donning a face mask.

The shocking outburst happened Sunday at a Walmart Neighborhood Market in Winter Springs, where Seminole County officials have implemented a mask mandate as numbers soar in the Sunshine State.

Additionally, Walmart announced Wednesday that all customers must wear face coverings while shopping at its stores starting Monday.

Footage shows the unidentified woman standing in the Walmart parking lot while attempting to berate store employees and mask-abiding citizens.

The woman then storms away while employees can be heard laughing in the background.

An unidentified woman in Winter Springs, Florida, became upset with shoppers and employees after she was kicked out for not wearing a face mask 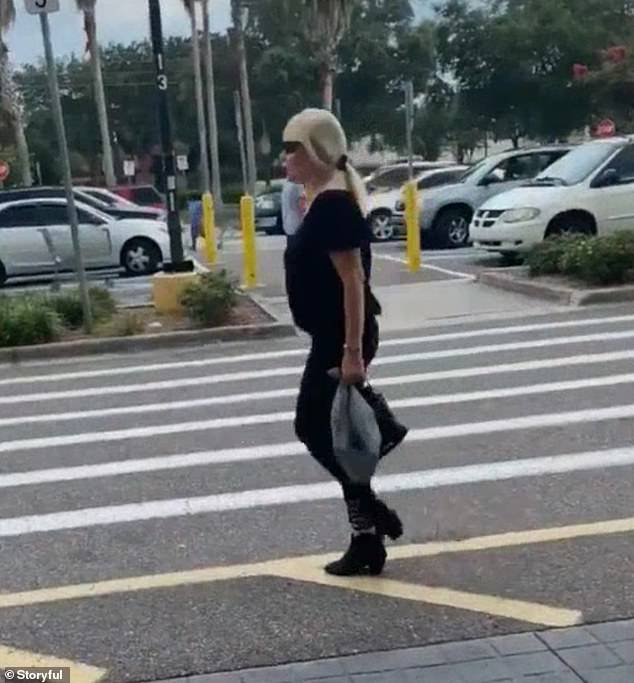 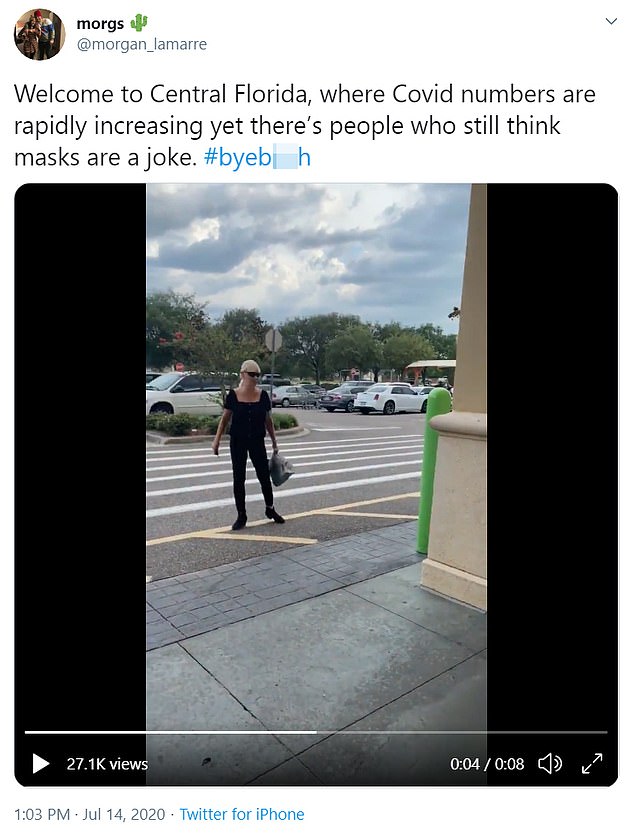 The woman who filmed it, Morgan Lamarre, told WESH she was walking into the local Walmart just as the woman was asked to leave by a manager.

The unidentified woman is just one of several recent incidents where people were caught on camera making a spectacle over face masks.

Earlier this month, a couple from Yuma, Arizona, were arrested after allegedly coughing on Walmart staffers after being told to wear a mask inside the store.

Store officials summoned police in light of the coronavirus pandemic that made Arizona a national hot spot for cases.

This week, a suspect in Palm Beach, Florida, was pushing a man in a wheelchair in Walmart when he was asked to wear a mask by a fellow shopper. 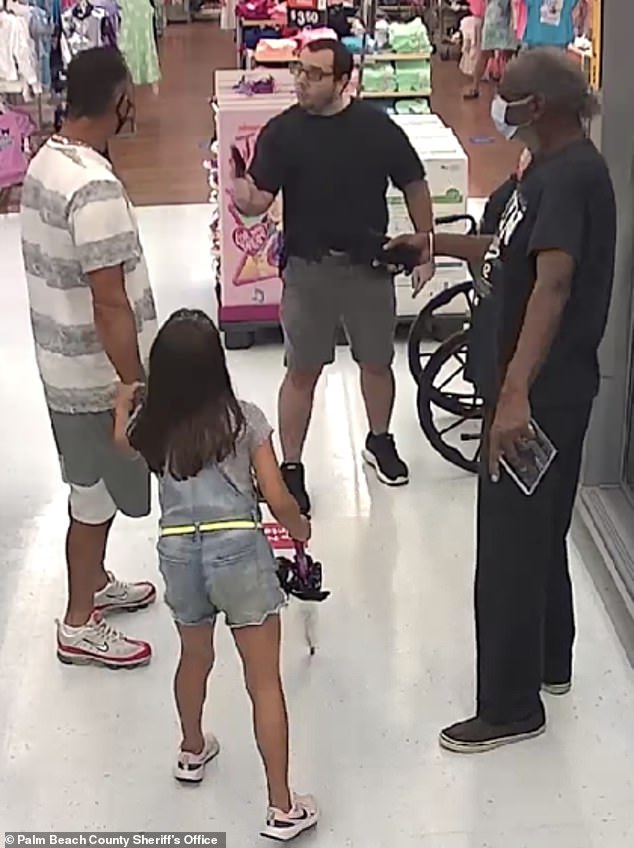 An unmasked shopper at a Walmart in Royal Palm Beach, Florida, is pictured from surveillance footage pulling a gun on another customer wearing a face covering

The suspect responded by brandishing a gun at the shopper.

The company will create a health ambassador role and will station them near entrances to remind customers of the new requirements.

These staffers, who will wear black polo shirt. will undergo special training to help smooth the transition with customers. 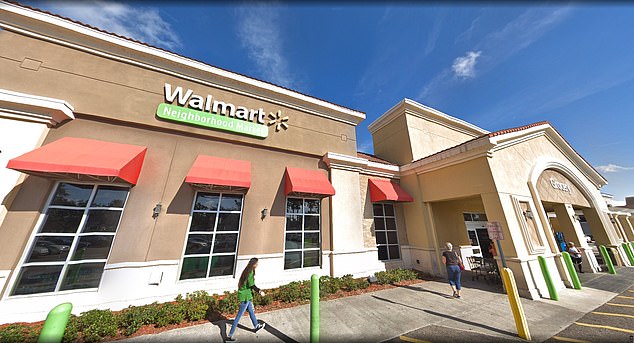 Flouting face masks, which has previously been supported by President Trump, appears to do more harm than good in Florida.

Trump was pictured for the first time publicly wearing a face mask in July and told Fox News that he’s ‘all for masks.’

But in April, he ignored advice from that Center for Disease Control and Prevention and said he likely wouldn’t wear one.

‘I don’t think I’m going to be doing it. Wearing a face mask as I greet presidents, prime ministers, dictators, kings, queens – I just don’t see it,’ he said at the time.

And on Monday, the Florida Department of Health recorded that second-highest number of test results received in one day, with 12,624 positive test results and 35 deaths reported to the state in the previous 24 hours. 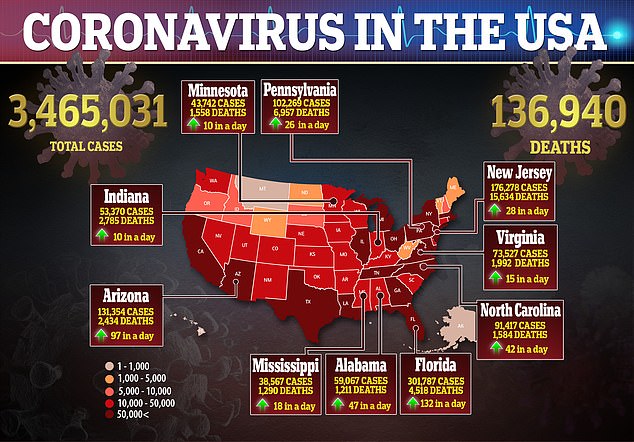 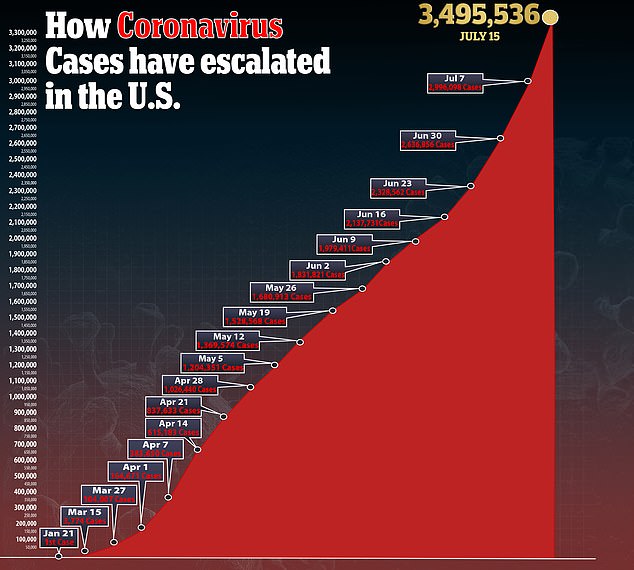 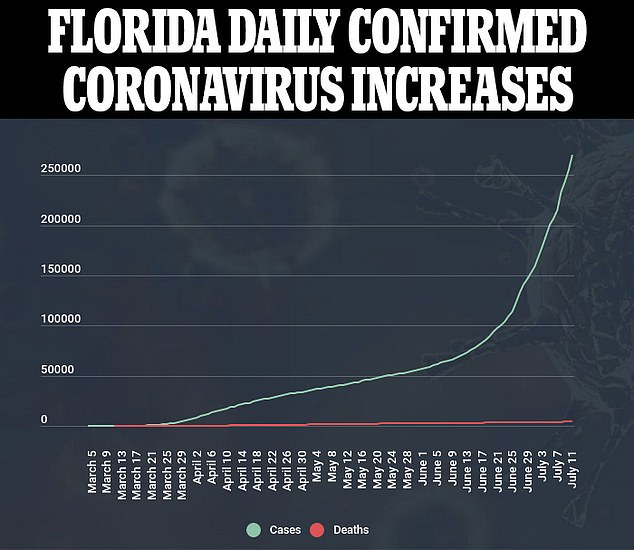 Almost half of Florida’s ICUs were at least 90 per cent full last Thursday, while one in five are completely full, the Florida Agency of Health Care Administration reported.

‘Miami is now the epicenter of the pandemic,’ said Lilian Abbo, an infectious-disease specialist from the University of Miami Health System.

‘What we were seeing in Wuhan six months ago, now we’re there.’

The numbers in Florida are so concerning that Governor Andrew Cuomo of New York, the country’s original epicenter, offered to send one day’s worth of medications to the state.

The small shipment was enough to treat 280 patients and act as a stopgap for Florida on Saturday, while the state was awaiting the delivery of remdesivir from the federal government.

DeSantis said that he had personally secured a supply of the antiviral from the President and vehemently denied needing assistance from New York.

Walmart will require customers to wear face coverings at all of its namesake and Sam’s Club stores, making it the largest retailer to introduce such a policy that has otherwise proven difficult to enforce without state and federal requirements.

The company said the policy will go into effect on Monday to allow time to inform stores and customers. The Bentonville, Arkansas-based company said that currently about 65% of its more than 5,000 stores and clubs are located in areas where there is already some form of government mandate on face coverings.

The retailer also said it will create the role of health ambassador at its Walmart stores and will station them near the entrance to remind customers without masks of its new requirements. These workers, who will be wearing black polo shirts, will receive special training to ‘help make the process as smooth as possible for customers.’ 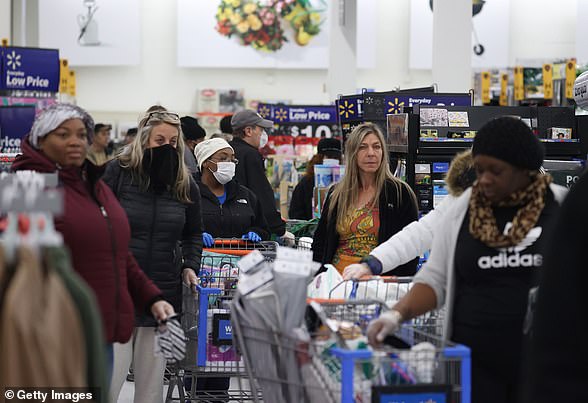 Walmart joins a growing list of retailers that have instituted mask mandates throughout their chains. Best Buy, the nation’s largest consumer electronics retailer, announced Tuesday that it will have a mask mandate for its customers at all of its stores. Starbucks announced last week that customers who visit its company-owned café locations in the U.S. will be required to wear face coverings. Both policies were in effect Wednesday.

The moves come as new COVID-19 cases are spiking in many states, particularly Arizona, California, Florida and Texas. Retailers have been challenged with striking a balance between keeping shoppers safe while making them feel comfortable.

The announcement also follows a shocking video confrontation that was filmed at a Florida Walmart last month, showing an older man barging his way past a door-keeper without wearing a mask. 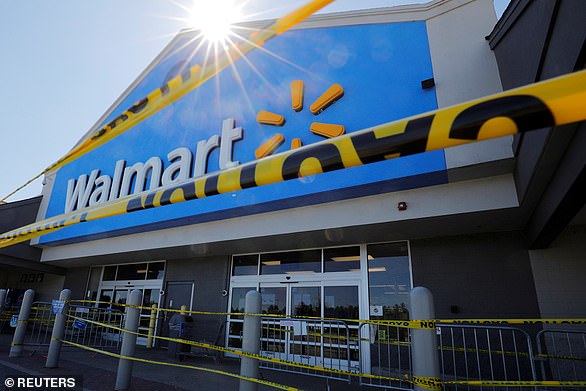 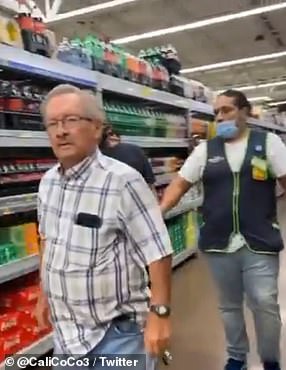 The announcement also follows a shocking video confrontation that was filmed at a Florida Walmart last month, showing an older man barging his way past a door-keeper without wearing a mask

Last week, the Retail Industry Leaders Association, which represents Walmart, Best Buy and other major chains, publicized a letter it sent to state governors to mandate store customers to wear face coverings. It said the hodgepodge of rules around the country have created confusion for shoppers and that has led to conflict between customers and workers trying to enforce store rules.

The National Governors Association said last week that its members are discussing the letter and others like it from different retail groups.

Social media is full of videos capturing clashes between those who are asked to wear masks, and employees who are under orders to make sure people wear them. 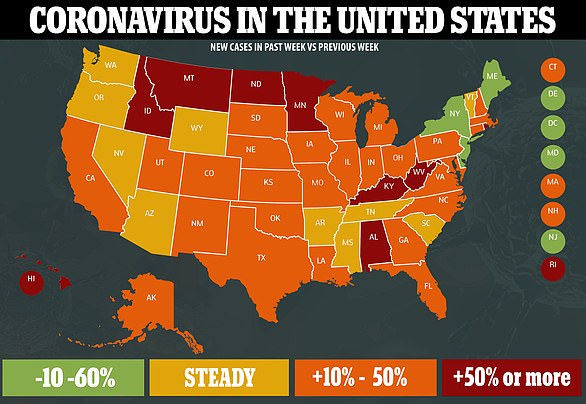 Fewer than half of U.S. states require masks in public places, according to the RILA. And only a handful of major retailers including teen clothing chain American Eagle Outfitters has a mask mandate for customers for all of its stores. Costco Wholesale Club was one of the first major retailers to require face coverings for customers at all of its stores. The policy went into effect in early May.

The Centers for Disease Control and Prevention recommends people cover their mouth and nose when around other people to help reduce the spread of the virus that causes COVID-19.

‘We know some people have differing opinions on this topic,’ wrote Dacona Smith, chief operating officer at Walmart U.S. and Lance de la Rosa, chief operating officer at Sam’s Club in a blog posted Wednesday. ‘We also recognize the role we can play to help protect the health and well-being of the communities we serve by following the evolving guidance of health officials like the CDC.’ 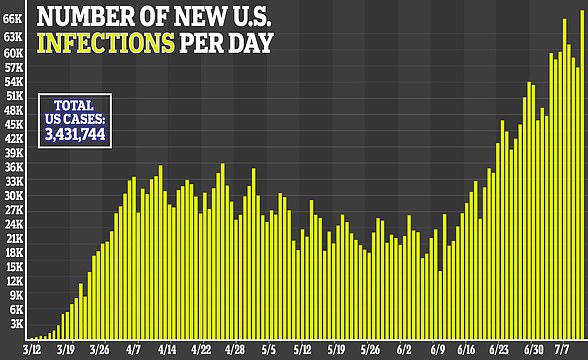