The people behind Meghan Markle’s lavish baby shower in New York City want the world to know about it.

Lewis Miller Design, the Manhattan-based celebrity florist, and Jennifer Zabinski Events, event planner to the stars, both touted their work during the five-day visit to the Big Apple by the Duchess of Sussex.

On its Instagram page, Lewis Miller Design praised the American-born British royal as ‘so sweet,’ ‘so engaged’ and a ‘class act.’

‘Oh what fun it was to teach an “amazing” flower class yesterday for Meghan Markle,’ the caption read.

The Instagram post included photos of the floral arrangement and decor that was used during the baby shower at the Mark Hotel in Manhattan. 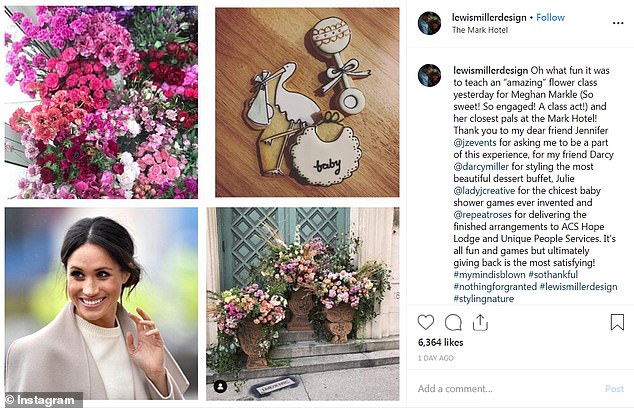 Lewis Miller took home an estimated $20,000 for its work at the baby shower.

JZ Events also took the opportunity to make sure the public knew about its contributions to the royal happening.

‘We’re so honored to have had the opportunity to plan a beautiful, intimate baby shower for Meghan Markle.’

JZ Events, which charged $50,000 for services rendered, also thanked tennis great Serena Williams, who is said to have footed the bill for the baby shower.

The seven-months-pregnant Duchess of Sussex celebrated the impending arrival of her first child with a lavish trip which is thought to have cost more than $500,000.

Meghan’s pricey – but privately-funded – party, which took place in a $75,000-a-night penthouse, included a flower arranging class for guests, using a variety of blooms from Upper East Side florist Lady Fleur – and royal watchers are now being given a glimpse at the colorful creations made during the event, as well as the sprawling space where the party was thrown.

The Duchess of Sussex celebrated the impending arrival of the royal baby with a spectacular baby shower in New York this week, costing an estimated $500,000 in total

Instead of sending guests home with their flowers, the 37-year-old, who is expecting her first baby with Prince Harry towards the end of April, brought in Repeat Roses, an organization which reworks flower arrangements at the end of events and then donates them to charity.

While collecting the flowers from the Grand Penthouse at The Mark, the waste-reducing business shared an array of images to its Instagram account, showing workers collecting the arrangements from inside the opulent space where Meghan and her VIP guests spent Wednesday afternoon celebrating.

Although much of the baby shower remains under wraps – with almost no images posted from inside the event – it appears Repeat Roses received permission to share the charitable aspects, even tagging The Mark Hotel, and Meghan’s party planner in its online posts.

After collecting the flowers from the penthouse, Repeat Roses then delivered the remodeled bouquets to charities which included pediatric patients staying in the Ronald McDonald House Charities of New York, which described the surprise gift as a ‘ray of sunshine’.

One photo of a team member collecting the flowers shows a glimpse of the stunning interior of the plush penthouse sitting room, including two $140 mandarin trees, which were seen being delivered to the hotel ahead of the event, in the background. 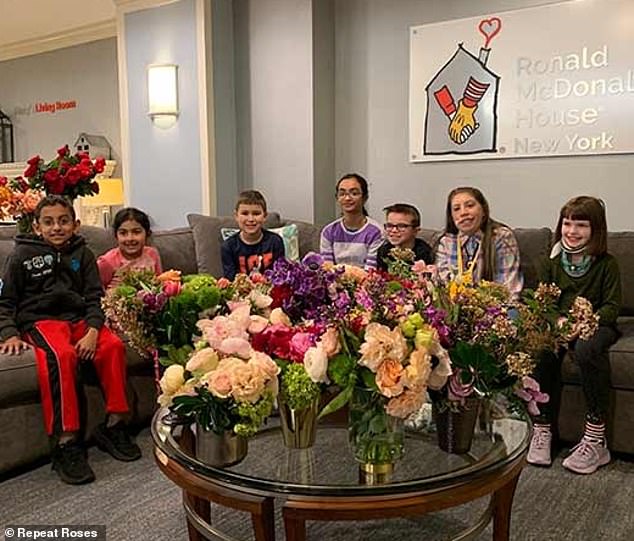 Repeat Roses, an organization which reworks flower arrangements at the end of events and donates them to charity, has shared a glimpse at the stunning flowers displayed at Meghan’s baby shower, which were later donated to patients at the Ronald McDonald House in NYC 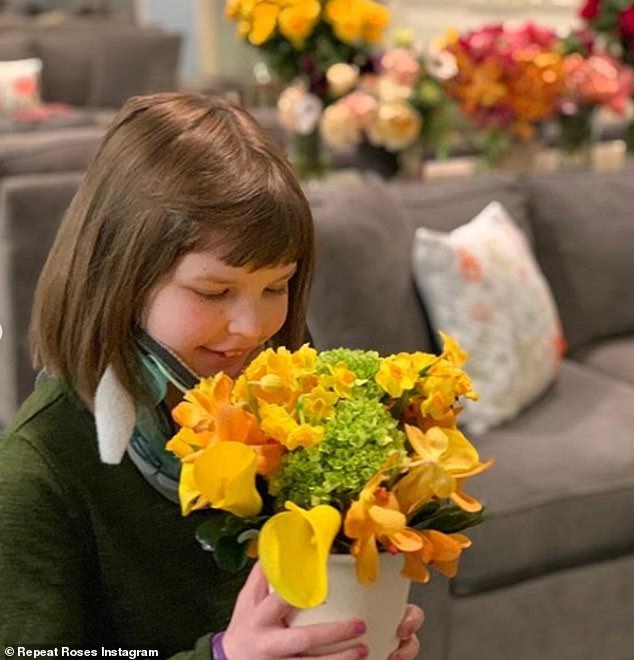 A sweet-smelling treat: The vases of flowers were put together by Meghan and her baby shower guests, before being donated to young cancer sufferers like this little girl 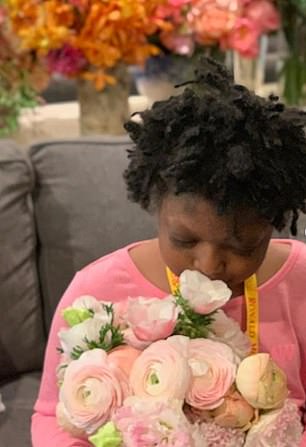 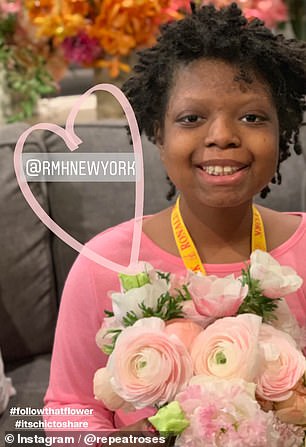 The images of the charitable donations come after social media users hit out at the sky-high cost of the duchess’s trip, with one branding the $500,000 spent on the getaway as ‘obscene’.

‘[Meghan and Harry] are Patrons of charities for the disadvantaged,’ the Twitter user wrote. ‘The obscene cost of this five day trip is utter hypocrisy.’

Other snaps shared by the organization show children and elderly patients at different charities across the city beaming as they pose with the lavish flowers donated to them by the duchess and her guests.

Captioning the pictures, Repeat Roses wrote: ‘We were honored to match the beautiful floral arrangements designed by the Duchess of Sussex and her guests, including host Serena Williams, to a few of our very favorite NYC neighbor organizations.

‘The gesture of kindness brought smiles and an emotional health boost to pediatric cancer patients at Ronald McDonald House New York, cancer patients at the Hope Lodge NYC and to behaviorally and medically fragile men at the Vyse Avenues Program.

‘The flowers brought a ray of sunshine on a cold winter day, and will be greatly enjoyed for the week ahead.’

The beautiful bouquets given to the different charities were put together during the baby shower, which included a flower arranging class taught by celebrity florist Lewis Miller.

Lewis, who is based on New York’s Upper East Side, has worked with a number of high-end brands in the past, including Chanel, Estee Lauder, Valentino, and Viktor & Rolf.

He is also famous for his guerrilla flower installations known as ‘Flower Flashes’, which see Lewis transforming unremarkable New York items, from trash cans to construction signs, into incredible pieces of art by covering them with stunning blooms.

But on this occasion, Lewis turned his hand to smaller scale arrangements, working with guests to help them fill their own individual vase, all of which were then passed on to charities.

‘We all each made an individual vase,’ baby shower guest and TV anchor Gayle King revealed.

‘And then Meghan, at her request, they got in touch with an organization I’ve never heard of with, Repeat Roses, and they’re all donated to different charities. I thought that was a very sweet thing.’

The recipients of the arrangements certainly seemed delighted by the ‘sweet’ gesture, with Repeat Roses documenting the delivery of each of the vases to different charities in the city on its Instagram account, where it also explained how the flowers are disposed of later on when they have died.

‘Later, we’ll return to collect flowers and vases for composting and recycling to close the loop and ensure a zero-waste experience,’ the organization detailed before thanking florist Lewis and party planner Zabinski, who helped to put together the special event.

The Repeat Roses post concluded: ‘Giving back to People + Planet. It’s what we do, and we’re so appreciative to have partnered with for this heartfelt occasion.’

Unlike Lewis, Repeat Roses is not a florist but rather an organization that specializes in collecting flower arrangements at the end of events to avoid waste, while also matching clients with charities they wish to donate the flowers to.

The organization breaks down the arrangements and turns them into smaller bouquets to hand out to the chosen charities, with prices for its specialized services starting at $1,750.