We all get stressed from time to time. But when does stress become a problem – one that raises the risk of depression, heart disease and other illnesses – and what are the best ways to avoid it?

This is the question posed by a remarkable BBC2 documentary which aims to tackle what has been dubbed ‘the mental health epidemic of the 21st Century’.

Diagnosable cases of stress, depression or anxiety affected 488,000 British workers in 2015, according to Government figures.

Rat race: In the documentary, a one-off Trust Me I’m A Doctor special, Dr Michael Mosley (above, with Viki Browne) and his team set out to discover just what is behind the startling rise in mental health problems

More than 11 million sick days were taken due to these conditions that year, almost half of the total number of working days lost. Last year, doctors wrote 70 million prescriptions for antidepressants and anti-anxiety drugs,

In the documentary, a one-off Trust Me I’m A Doctor special, Dr Michael Mosley and his team set out to discover just what is behind the startling rise in mental health problems and conducts a fascinating experiment to discover exactly what we can do, without resorting to medication, to reduce the impact of stress on our minds and bodies.

Dr Mosley says: ‘We surveyed 2,000 Britons while setting up the project, and 42 per cent told us they wanted to know how they could best cope with stress.’

Treatments range from self-help techniques and talking therapies to medication, or a combination of these. To find the best drug-free ‘therapy’, Dr Mosley took 68 volunteers who felt stressed but had not been diagnosed with a mental health problem, and split them into three groups. Over eight weeks they tested three stress-busting techniques: yoga, mindfulness and, perhaps surprisingly, that favourite British pastime, gardening. 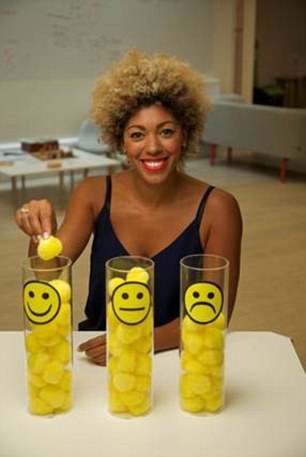 Dr Mosley says the inclusion of the latter was not as strange as it might first appear. ‘There’s growing evidence that social interaction and contact with nature has a positive affect on our mood.

‘Studies into yoga suggest it can help with stress by lowering the heart rate and blood pressure.

‘And there is also research to suggest mindfulness, a form of meditation that focuses the mind on the present, helps you avoid being caught in a cycle of negative thoughts which cause stress.’

They compared all three to a control group who went about daily life as usual. Throughout the eight weeks they monitored volunteers’ stress levels. At the beginning and end of the experiment, the volunteers filled in psychological questionnaires and gave saliva samples to measure their levels of a hormone called cortisol, which plays a key part in the body’s stress response.

Cortisol is critical to our health and survival, but constantly raised levels can cause problems such as fatigue, weakness, depression, anxiety, irritability, loss of emotional control and cognitive difficulties.

Professor Angela Clow, a psychologist from the University of Westminster, says: ‘Cortisol activates your brain and gets you prepared for the day. When we wake up we get a huge surge in cortisol, known at the “cortisol awakening response” or CAR.

‘Then you experience a drop-off during the day. If someone is suffering from stress, you see less of a surge in the morning, leaving them feeling less able to cope, and then sometimes higher levels during the day.’

Prof Clow and psychologist Dr Nina Smyth, also from the University of Westminster, studied how CAR declined over the day to see if an eight-week activity programme could impact on volunteers’ cortisol levels. It was the first study of this kind. Of the three therapies, mindfulness had the greatest impact on balancing cortisol levels, followed by gardening. Yoga had a modest effect.

On average, the volunteers’ CAR increased by a healthy 14 per cent, compared to the control group who didn’t do any activity, but for those people who said they enjoyed their activity, CAR rose by an astonishing 42 per cent. 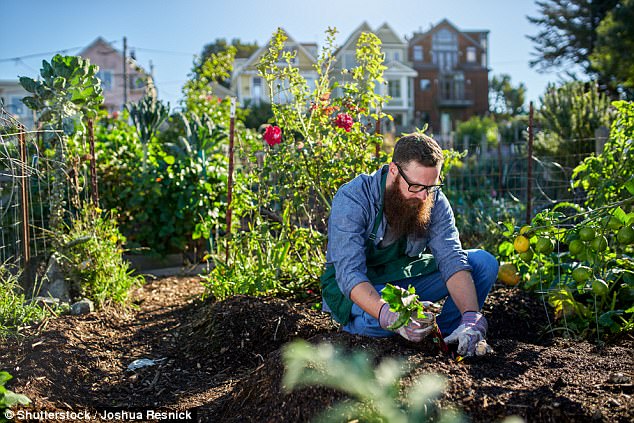 Dr Mosley took 68 volunteers who felt stressed but had not been diagnosed with a mental health problem, and split them into three groups. Over eight weeks they tested three stress-busting techniques: yoga, mindfulness and, perhaps surprisingly, that favourite British pastime, gardening

She says: ‘If exercise could be bottled and sold it would probably be one of the most effective medicines ever invented, reducing our risk of many serious diseases.

‘When we exercise we release endorphins, hormones that make us experience positive feelings. New research from Germany suggests the key thing is not how much exercise you do, but what type.’

Dr Williams heads to Europe’s largest indoor climbing arena, in Edinburgh, to look at a form of exercise that demands total concentration. She says: ‘Bouldering, which is rock-climbing without any equipment, has been suggested as better than general exercise when it comes to treating depression. You have complete focus so it breaks the cycle of rumination and negative thoughts.’ Other forms of exercise, such as dancing, have similar benefits, she says.

Dr Giles Yeo, a research associate at Cambridge University, who studies the impact of food on the brain, looks at whether diet impacts mental health. He says: ‘One well-known effect of eating junk food is that it gives extreme highs and lows of blood sugar. Some research shows that this can interfere with brain chemicals that affect mood. There are trace nutrients our brain requires in minute amounts that influence our mental state. They include B vitamins, iron, calcium, magnesium, chromium, zinc and selenium.

‘All are abundant in vegetables, although British veg is poor in selenium, but Brazil nuts are high in it.

‘Fish oil is high in omega 3 fatty acids, which studies have linked to brain health. A study in Norway showed that people who consumed fish oil were 30 per cent less like to suffer depression. Vegetarians find omega 3 in flax seeds, avocados or walnuts.’

The team also looked at what causes stress, anxiety and depression, apart from life-changing emotional events such as relationship break-ups, death or losing a job. Lack of sleep is a big factor. 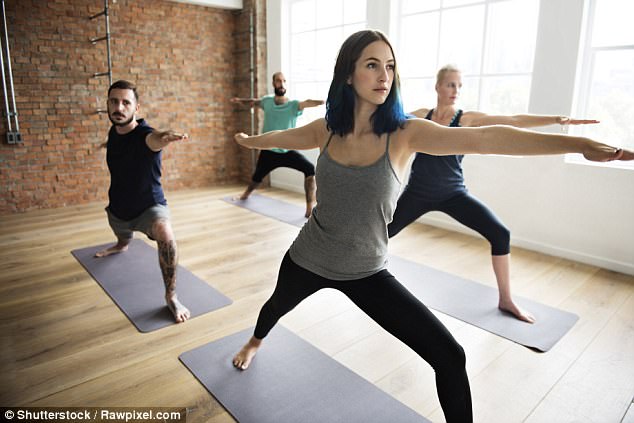 Dr Mosley said: ‘Studies into yoga suggest it can help with stress by lowering the heart rate and blood pressure’

Their day dragged, they suffered tension, anxiety, depression, and their feelings of paranoia and mistrust increased. Dr Gregoire adds: ‘I was surprised at how quickly lack of sleep can affect our mood and thinking. It emphasises how important sleep is to us.’

To promote good sleep, the key things are daily exercise, regular sleep and wake-up times and no screen use an hour before bed.

People also worry about social media and whether it affects mental health. Dr Williams, who uses social media to keep up with friends and share news, says: ‘Spending time on social media has been blamed for heightening anxiety, causing insecurities and loneliness.

‘There is some scientific evidence to back this up. Recent studies show that passively following other people’s news prompts a range of negative emotions including envy. Psychologists have identified a particular feeling – FOMO, or ‘fear of missing out’.

‘We asked ten avid social-media users to take part in an experiment, placing yellow balls in three different tubes to identify their feelings – positive, neutral or negative – as they read 100 posts. Twenty per cent experienced negative feelings, 45 per cent were positive, and 37 per cent were neutral. So sharing news had a positive affect on mood, but the more time spent on social media, the more ambivalent our users felt.’ 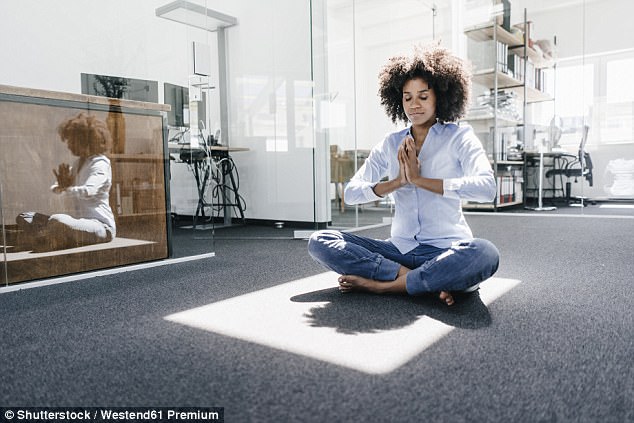 He adds: ‘And there is also research to suggest mindfulness, a form of meditation that focuses the mind on the present, helps you avoid being caught in a cycle of negative thoughts which cause stress’

Millions of us turn to antidepressants for depression, but in the survey, 25 per cent wanted to know if they were bad for you.

Dr Mosley meets performance artist Viki Browne, 25, from Bristol, who suffers from anxiety and depression but refuses to take medication. She says: ‘I function on an intense spectrum of highs and lows and was concerned if I took antidepressants I’d miss out at the top of that wave where I get a lot done.

‘I’ve had three bouts of ill health, age 17, 21 and 25, and I’ve got through them with talking therapies, support from friends and family, and performance work.’

Viki incorporated her mental-health struggles into her show which she performed at the Edinburgh Festival this year. Dressed as a rat, she describes a rallying cry her father gave her to cope with life. She says: ‘He taught me no one was going to give me anything, no one was going to help. He said I had to adapt like a rat.’

It’s a drastic solution but Viki’s fear of antidepressants reflects why doctors and scientists are looking so hard to find mental-health cures elsewhere.

Dr Mosley concludes: ‘It’s well established that stress has a negative impact on our mental health and heightens our risk of conditions like depression. It’s good to get medical advice sooner rather than later. Doing the old stiff upper lip, trying to ignore it, or saying “Pull yourself together”, doesn’t work.’

More patients than ever are coming to me seeking help for stress – which, interestingly, isn’t in itself a recognised diagnosis.

There are no specific symptoms, making it difficult for us doctors to categorically establish it as a medical problem. And there’s a pervasive overuse of the word ‘stress’ which belittles those who are genuinely suffering.

But it can be serious. As well as the risks to mental health outlined by Dr Mosley and his team, common complaints including insomnia, irritable bowel syndrome and high blood pressure can all be consequences of stress. The answer doesn’t always come in tablet form, but rather in a holistic change in lifestyle – sleeping patterns, exercise and diet can all help. But medication may also have a crucial role, particularly in those with crippling anxiety or depression symptoms, so pills should not be demonised.

There has been a recent shift in attitude towards acknowledging and accepting mental illness as something that can affect anyone.

I would like to see that diffuse now into accepting what is actually causing such a rise in mental-health issues – whether it’s our working patterns or constant online activity.