A former Green Beret has raised $35,000 to help an Afghan interpreter escape the country after trying for more than a decade to get the State Department to grant him a special visa to come to the United States.

Greg Adams, who served in Afghanistan as part of the US Army Special Forces, launched a GoFundMe to help Moneer, an Afghan who has helped American troops in the country, relocate to another country.

According to Adams, Moneer ‘distinguished himself with every unit he served on over the years, especially Army Special Forces.’

‘Our ability to communicate with locals in local Tribal leadership, Afghan government, and Security Forces were instrumental to mission success.’

A former US Army Green Beret has raised some $35,000 on GoFundMe to help Moneer (right), an Afghan interpreter who risked his life to help American forces, flee his home country 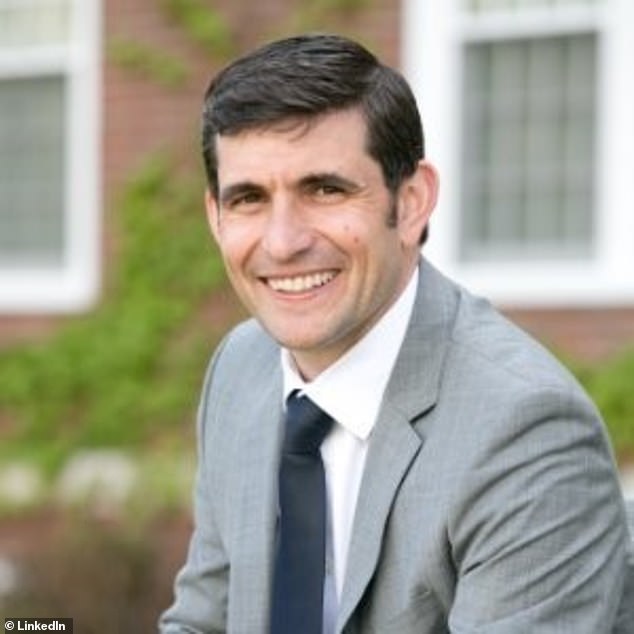 Greg Adams, who served in Afghanistan as part of the US Army Special Forces, writes that since 2010, he has been in contact with members of Congress, nonprofit organizations, and attorneys in an effort to speed up Moneer’s special immigrant visa application, but to no avail 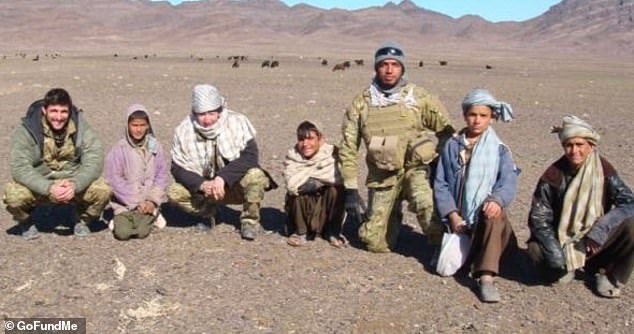 Adams is seen above on the far left. Moneer is seen third from right 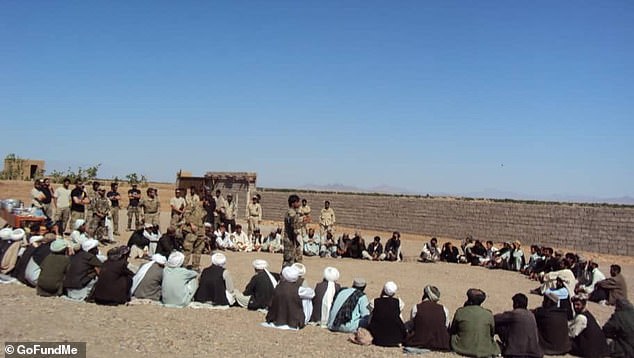 According to Adams, Moneer ‘distinguished himself with every unit he served on over the years, especially Army Special Forces. Our ability to communicate with locals in local Tribal leadership, Afghan government, and Security Forces were instrumental to mission success.’ 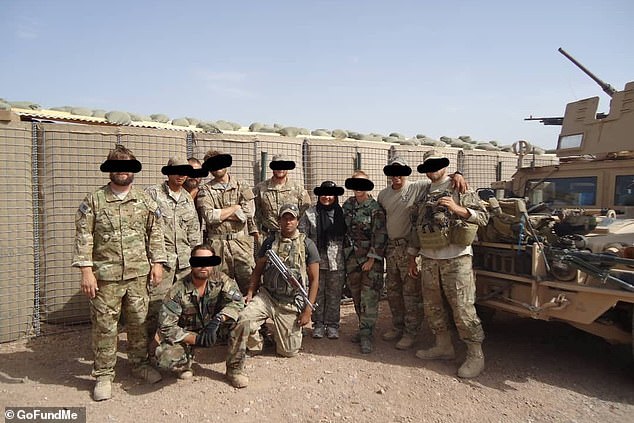 Adams added: ‘We relied on his judgement and advice every day. He has been blown up by an IED (improvised explosive device), been in more firefights than many experienced soldiers, and served the US, NATO, and Afghanistan militaries for over a decade.

‘Moneer receives threats on this life, has had his home and land stolen from him, and is vocal and active about sharing the loss of his fellow interpreters from extremists targeting those that helped the United States.’

‘His efforts kept elite US service members alive on hundreds of dangerous missions and resulted in adversaries behind bars and more stable communities – at least for a time,’ Adams wrote on GoFundMe.

‘Despite this record and the moral obligation we have to protect these interpreters, the United States government has fallen flat on the promise of safety for Moneer and his wife.’ 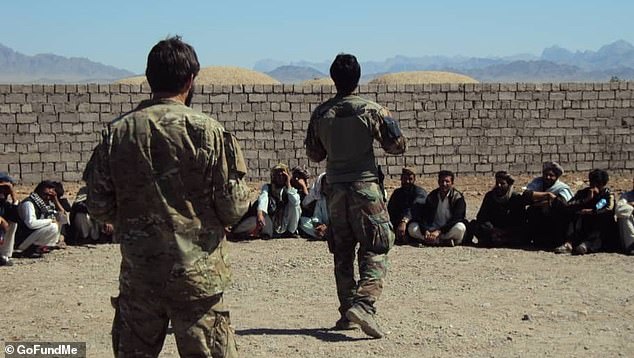 Adams writes that since 2010, he has been in contact with members of Congress, nonprofit organizations, and attorneys in an effort to speed up Moneer’s special immigrant visa application, but to no avail.

The $35,000 raised on GoFundMe will fund Moneer’s and his wife’s evacuation to Turkey, where he would then apply for asylum with the United Nations Refugee Agency.

Last week, Adams wrote that Moneer and his wife were out of Afghanistan, though he had yet to reach the primary third country where they will stay while their application for a special immigrant visa is processed.

‘We’re excited that Moneer and his wife are safe and that’s what counts right now,’ Adams wrote.

DailyMail.com has reached out to the State Department seeking comment,. 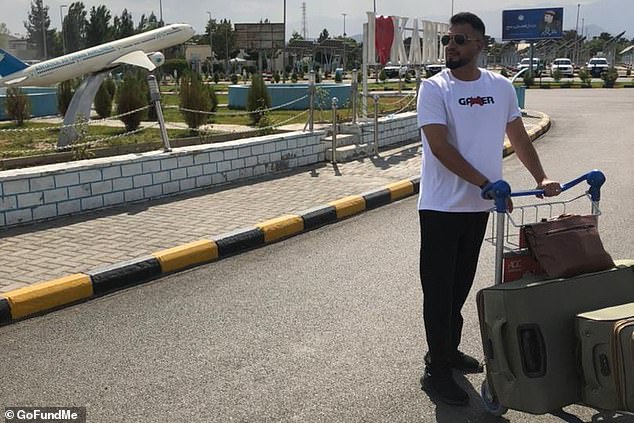 According to Adams, Moneer is seen above at the airport in Kabul last week 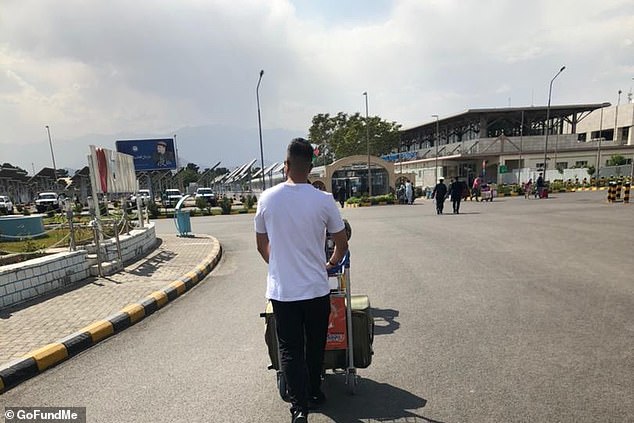 The fate of Moneer and other local Afghans who helped American forces during their 20-year-long war in Afghanistan has become a key point of controversy for the Biden administration.

As Washington accelerates its planned withdrawal of US forces from the country, the administration says it is adding staff to hurry up the visa process for Afghans who worked for the US government and want to flee to avoid Taliban reprisals.

But for refugee advocates and members of Congress, the effort still isn’t enough to ensure that Afghans who worked as US military translators, guides and in other roles aren’t persecuted in large numbers in the months ahead.

Fighting has increased across Afghanistan ahead of the September 11 deadline for withdrawal, which will end a two-decade US-led NATO troop presence since the Taliban were forced from power in the wake of the 2001 attacks on the United States.

Afghans who worked for the US during America’s longest war fear the insurgency will target them and their families, retribution for helping foreign forces. 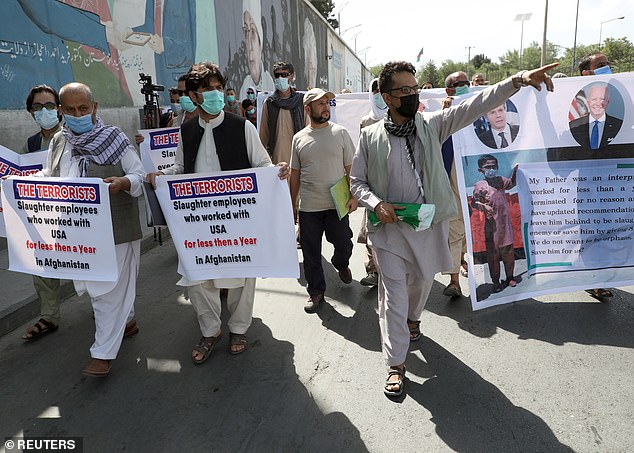 With the final pullout expected as early as mid-July, there appears to be a mismatch between the expectations of refugee advocates and what the Biden administration says is realistic given the legal and practical requirements to process special immigrant visas.

The administration says it has already doubled the number of staff processing cases in Kabul and tripled personnel reviewing petitions at US Citizenship and Immigration Services.

It also plans a five-fold increase in the number of staff in the State Department working on the visas in Washington, a senior administration official told Reuters.

‘All of these changes have resulted in, over the last couple of months, the largest number of cases processed in the history of the program in any 60-day period,’ the official said, speaking about the plans on condition of anonymity.

The plan is to process at least 1,000-1,400 visa applications for Afghans who worked for the United States, not including their families, every month.

By contrast, the US government says, it issued only 237 such visas here in the last three months of 2020.

But even with the new effort, the administration says there’s a limit to how fast a 14-step, multiple-agency process can move without changes to legislation.

If all goes well, a visa could be processed in nine to 12 months.

‘Other than that, the “brute force” approach of just more bodies has gone about as far as it can,’ a second US official said.

The administration supports legislation in Congress that would allow Afghans to do a medical check upon arriving in the United States, instead of in Afghanistan.

It is also supports legislation eliminating the requirement for a specific petition at the Department of Homeland Security. 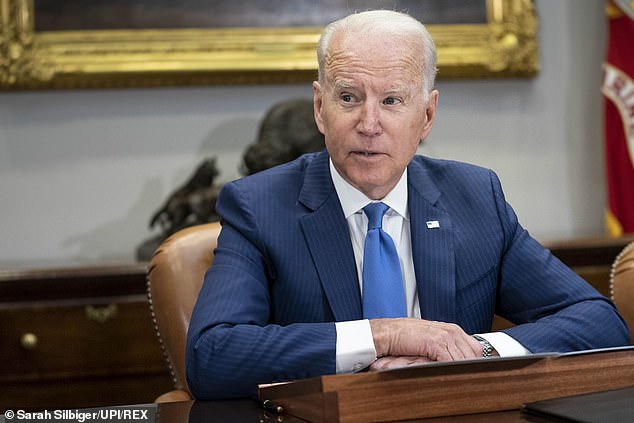 ‘That would be another two months that we could shave off,’ the first official said.

Secretary of State Antony Blinken reassured Congress last month of his commitment to Afghans who worked with the United States, but also suggested any threats to their safety might not be immediate.

‘I wouldn’t necessarily equate the departure of our forces in July, August, or by early September with some kind of immediate deterioration in the situation,’ Blinken said.

Blinken acknowledged there were 18,000 Afghans ‘in the pipeline’ for potential visas. Half of them have expressed interest but haven’t yet filled out the necessary forms, he said.

Senator Patrick Leahy, recalling the chaos in Vietnam after the fall of Saigon in 1975 when he was a junior senator, said the matter was urgent.

‘They’re going to have a target on their back,’ Leahy said.