Fort William Morrisons called out over ‘sexist’ sign outside

A mother of four was viciously trolled after trying to call out a supermarket for using a ‘sexist’ sign outside.

Annie James was outraged after spotting a sign outside Morrisons in Fort William, Scotland, which read: ‘Caution. Men Working.’

Hoping to publicly call the company out, she shared the photo to their Facebook page with the caption: ‘Obviously only men are allowed to work on this construction site at your Morrisons petrol station in Fort William. #everydaysexism.’

Everyday sexism is a project to document acts of sexism, whether they are minor or serious, to demonstrate that the problem does exist.

Unfortunately for Ms James, other users on the Facebook page disagreed with her and accused her of overreacting.

Annie James was outraged after spotting a sign which read: ‘Caution. Men Working.’ She shared the picture with the hashtag #everydaysexism

Plenty of Facebook users have accused Ms James of overreacting. In 2015, it was estimated that 99 per cent of building site workers were men

Dave Smith wrote: ‘Outrage for outrage sake. Get a life.’

Maria Brown joked: ‘I take it she doesn’t want to speak to the MANager?’

Lisa Anne added: ‘Since construction workers are primarily male, yes, that’s what the sign will say. It doesn’t say no women allowed.’

In 2015, it was estimated that 99 per cent of building site workers were men, with women only making up 11 per cent of the entire construction industry workforce – including desk jobs in design, management or secretarial.

The following year, pop superstar Madonna brought up the issue of sexist construction site signs when she posted a ‘men working’ sign to her Instagram page.

The 59-year-old wrote: ‘Did you ever see a sign like this on any city street that said. “Women Working?” Wait…didn’t think so.’

After reading the arguments going on in the comments of her photo, Ms James attempted to explain that the sign should replace ‘men’ with ‘people’. 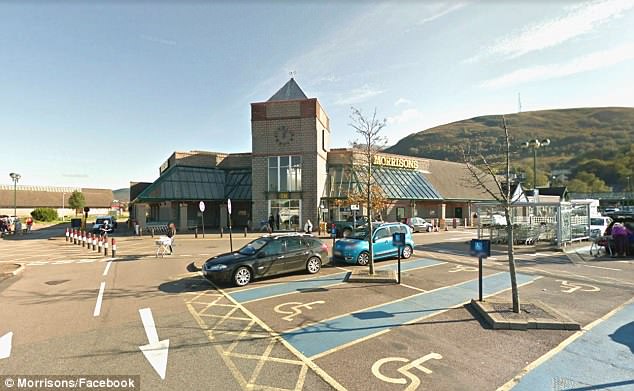 She spotted the sign outside Morrisons in Fort William, Scotland (pictured)