Fossil hunters have found the remains of an enormous sea creature which bares an uncanny resemblance to the Loch Ness monster.

Researchers uncovered the 70-million-year-old remains of a massive elasmosaur, which would have weighed 15 tons and was from the depths of the Antarctica.

Experts say that the 40-foot long animal is a member of the reptile family elasmosaurid and is the largest of its kind ever found.

The research adds to evidence that a vibrant marine ecosystem existed just before the dinosaur mass extinction.

Some believe that ‘Nessie’ is a long-necked plesiosaur – like an elasmosaur – that somehow survived when the dinosaurs were wiped out.

Fossil hunters have found the fossilised remains of an enormous sea creature which is being dubbed the real-life Loch Ness monster. Researchers uncovered the 70-million-year-old remains of a massive elasmosaur would have weighed 15 tons (artist’s impression)

WHAT IS AN ELASMOSAURUS?

Elasmosaurids are a monophyletic group of plesiosaurs with extremely long necks.

They had the longest necks of the plesiosaurs and survived from the Late Triassic to the end of the Cretaceous.

Their diet mainly consisted of crustaceans and molluscs.

Although abundant elasmosaurid material has been collected from the Upper Crustaceous  of Antarctica, skull material is extremely rare.

The earliest elasmosaurids were mid-sized, about 6 m (20 ft).

In the Late Cretaceous, elasmosaurids grew as large as 11.5–12 m (38–39 ft), such as Styxosaurus, Albertonectes, and Thalassomedon. T

heir necks were anywhere between 32 and 76 (Albertonectes) cervical vertebrae. They weighed up to several tons.

The resemblance of Nessie’s head and neck to that of a dinosaur prompted people to say that it was a surviving sauropod.

These were terrestrial, air-breathing dinosaurs – while swimming, Nessie would have to poke her head out of the water once every few seconds.

The Nessie-as-sauropod myth may have drawn on the 19th-century theory that Brachiosaurus spent most of its time in the water, which would help to support its massive weight.

Elasmosaurus is a genus of plesiosaur, which lived in North America during the Campanian stage of the Late Cretaceous period, about 80.5 million years ago.

The fossil is now one of the most complete ancient reptile fossils ever discovered.

Some believe the creature, which had a long giraffe-like neck and a head resembling that of a snake somehow survived when the dinosaurs were wiped out.

‘For years it was a mystery … we didn’t know if they were elasmosaurs or not,’ revealed paleontologist Jose O’Gorman of Argentina’s National Scientific and Technical Research Council told the National Geographic.

‘They were some kind of weird plesiosaurs that nobody knew.’

To make sure, researchers needed a more complete specimen, and as it happened, they had a potential candidate.

William Zinsmeister of Purdue University had discovered a specimen on Seymour Island—just south of the northern tip of the Antarctic Peninsula—during a 1989 expedition.

At the time, though, he didn’t have the resources to excavate the fossil find, but he informed researchers in Argentina about the discovery. 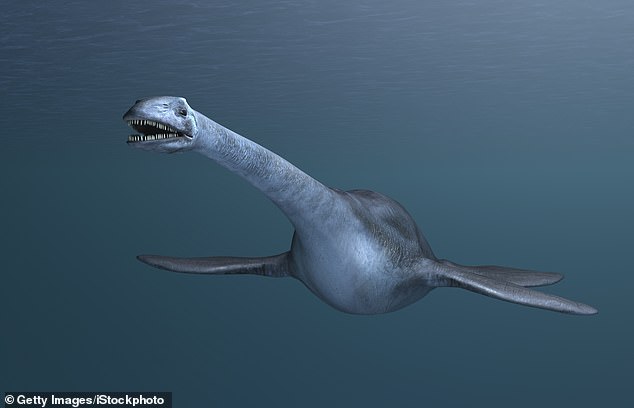 Experts say that the 40-foot long animal is a member of the reptile family elasmosaurid and is the largest of its kind ever found. The research adds to evidence that a vibrant marine ecosystem existed just before the dinosaur mass extinction

But then the Argentina Antarctic Institute got involved and started excavating the fossil in 2012, which took years because of weather conditions and logistical problems.

Finally in 2017, the excavation was finished and yielded a substantial portion of the animal’s skeleton.

The new specimen is also very interesting because it dates so close to the end of the Cretaceous—just 30,000 years before the mass extinction of the dinosaurs around 66 million years ago.

A lot of marine life would have needed to thrive there to satisfy the appetite of such a large creature, the researchers said.

The fact that these animals continued to exist so late in the Cretaceous adds to the evidence that the aquatic world, at least, continued to flourish right up to the sudden mass extinction.

‘Even in Antarctica, there were lots of happy elasmosaurs,’ Anne Schulp, a vertebrate paleontologist at Utrecht University in the Netherlands who was not involved in the research told the National Geographic.

‘The different morphology of this species also shows that specialization was still happening at this late point in the existence of plesiosaurs.

‘It’s definitely an indication that toward the end of the Cretaceous, plesiosaurs managed to expand their feeding repertoire,’ she said.

The research is published in Cretaceous Research.

WHAT DO PEOPLE BELIEVE ABOUT THE LOCH NESS MONSTER?

Rumours of a strange creature living in the waters of Loch Ness have abounded over the decades, yet scant evidence has been found to back up these claims.

One of the first sightings, believed to have fuelled modern Nessie fever, came in May 2, 1933.

On this date the Inverness Courier carried a story a local couple who claim to have seen ‘an enormous animal rolling and plunging on the surface.’

Another famous claimed sightings is a photograph taken in 1934 by Colonel Robert Kenneth Wilson.

It was later exposed as a hoax by one of the participants, Chris Spurling, who, on his deathbed, revealed that the pictures were staged.

Other sightings James Gray’s picture from 2001 when he and friend Peter Levings were out fishing on the Loch, while namesake Hugh Gray’s blurred photo of what appears to be a large sea creature was published in the Daily Express in 1933.

Robert Kenneth Wilson, a London physician, captured arguably the most famous image of the Loch Ness Monster, the surgeon’s photograph was published in the Daily Mail on April 21, 1934

The first reported sighting of the monster is said to have been made in 565AD by the Irish missionary St Columba when he came across a giant beast in the River Ness.

But no one has ever come up with a satisfactory explanation for the sightings – although earlier this year ‘Nessie expert’ Steve Feltham, who has spent 24 years watching the Loch, said he thought it was actually a giant Wels Catfish, native to waters near the Baltic and Caspian seas in Europe.

An online register lists more than 1,000 total Nessie sightings, created by Mr Campbell, the man behind the Official Loch Ness Monster Fan Club and is available at www.lochnesssightings.com.

So what could explain these mysterious sightings?

Many Nessie witnesses have mentioned large, crocodile-like scutes sitting atop the spine of the creature, leading some to believe an escaped amphibian may be to blame.

Some believe Nessie is a long-necked plesiosaur – like an elasmosaur – that survived somehow when all the other dinosaurs were wiped out.

Others say the sightings are down to Scottish pines dying and flopping into the loch, before quickly becoming water-logged and sinking.

Eventually, enough of these are gathered to propel the log upward as deep pressures begin altering its shape, giving the appearance of an animal coming up for air.