AFL coach Ross Lyon is looking for a new job after he was sacked by the Fremantle Dockers in a dramatic morning at the club.

Dockers chief executive Steve Rosich was also shown the door by the club which has won just one third of its games in the last four seasons and has missed the finals again despite recruiting a number of star players.

Lyon’s sacking was effective immediately with assistant coach David Hale to take over reigns for the final game of the season against Port Adelaide on Sunday.

Lyon took over as the Dockers coach in 2012, after a well-regarded spell at St. Kilda in which he took the Saints to the runner-up spot twice.

He began well at the Dockers too, taking the team into the 2013 grand final, but after being beaten at home in the 2015 preliminary final, Fremantle has not made the top eight since.

‘This isn’t acceptable to the board, the players, and most importantly to our supporters. We need high performance and consistency at all levels of the club, so we need to change and evolve,’ a club statement read.

Lyon had one more year to run on his contract, and said the club acted now to prevent an ongoing debate in 2020 about whether he deserved another deal.

‘I would have liked to have finished next year,’ Lyon said.

‘When we’ve had our best available, we’ve beaten six of the top eight. We’ve beaten Geelong last week with eight of our best 16 players out.

“That’s why I probably don’t agree with the decision, but I certainly respect the decision.

“For the reasons that there was no way that the club would extend me beyond 2020, with the noise around that, it was a lot for them. They wanted some clean air.’

Many Dockers fans were glad to see the back of Lyon, whose defence-first mindset produced a dour and hard-to-watch style of play.

‘I wish there was an hooray emoji. This is in the best interest of the club, well done,’ one fan posted on the club’s Facebook page.

Another added: ‘About time! This should have happened at least a year ago!’ 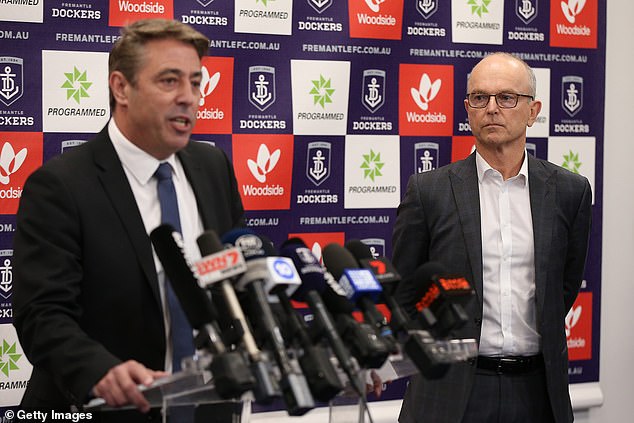 Others were reluctant to point the finger at Lyon.

‘I believe it is the PLAYERS at fault here… not the coach! No matter how good a coach is it is still up to the players to actually mark and kick the goals under pressure,’ one fan wrote.

Another added: ‘Best coach we ever had, did more for us then any other coach. I don’t think it was Ross which was the issue. I believe it was the assistant coaches letting him down. I am absolutely saddened by this news.’

‘He has been a real wart on the backside of that footy club for a number of years now,’ Hardie told 6PR Radio.

‘He’s created a toxic environment, it’s not a happy camp at all, he’s a self-promoter, looks in the rear view mirror far too much to the days of St Kilda which was ten years ago.’ 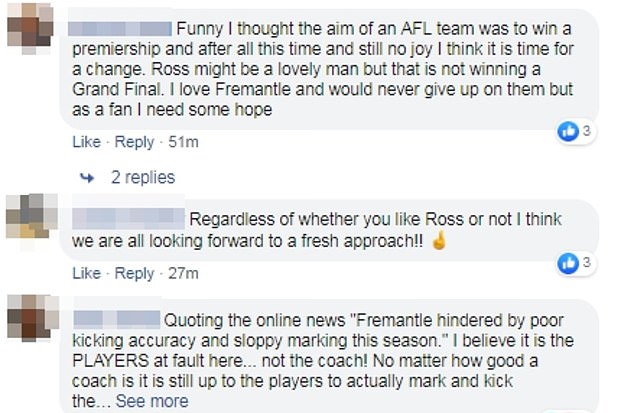 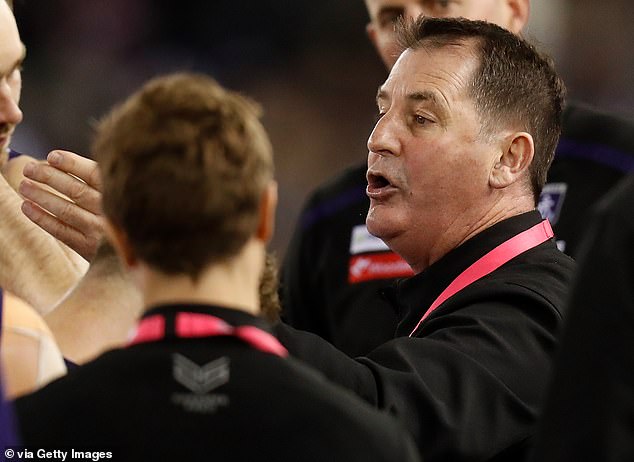 Lyon said the Dockers will always hold a ‘special place in his heart’.

‘I was strong enough and tough enough to go through next year,’ he said.

Mr Rosich said his departure after 11 years in the top role at Fremantle was due to a disagreement about strategy.

‘Given that [the board and I] cannot agree on some of the direction of the club we have reached a mutual agreement for me to step down,’ he told reporters.