A French tourist is asking Britons to help her track down a missing camera filled with topless pictures.

Lily Mika, a freelance web editor, visited the Isle of Skye on May 16 but accidentally left her camera next to Loch nan Eilean near Sligachan after taking ‘artistic topless photos’ in her favourite spots.

Ms Mika is desperate to recover her work so she can publish a book compilation of the images for an art project in order to ’empower women, encourage them to become more free and confident and to do what they want’.

The pictures are kept in a black Lumix GX80 – which also holds images of her grandparents and boyfriend.

Ms Mika is desperate to recover her work so she can publish a book compilation of the images in order to ’empower women, encourage them to become more free and confident and to do what they want’

Speaking with MailOnline, Ms Mika said: ‘When I realised when leaving for the airport that my camera wasn’t in the bag, I immediately remembered where I had it last (our last break on Skye before driving back to Edinburgh).

‘So we searched on google maps with satellite pictures and we found the rest area. I asked for help on social media and at least 15 people went there in the following days to have a look for us but they didn’t find anything.

‘It was a touristic spot because of the beautiful view on the Cuillins so I guess other visitors stopped by and found the camera.’

Ms Mika had been travelling with her photographer boyfriend Jules, who takes the pictures for her art project.

The former tour guide even offered to show the person who finds her camera around her region in France as a mark of appreciation.

She added: ‘I really hope people will return it. It’s not only about the camera… it’s more about the pictures. 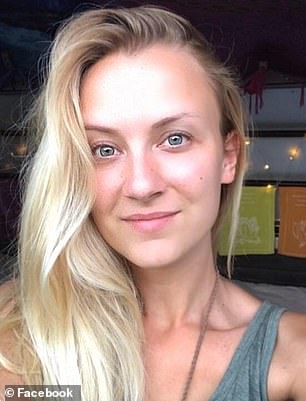 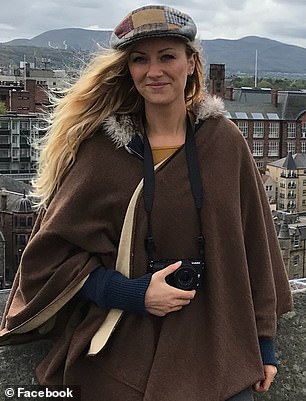 In an online appeal on her Facebook page on Tuesday, Ms Mika wrote: ‘The topless picture is not for catching attention, they are the reason I want to do everything to find my camera’

‘I know it’s probably naive but I think people will realize when looking at them that the pictures inside are so important for their owner.

‘I’ve been dreaming about Scotland for years, it was my dream destination so I took around 600 pictures during my nine-day trip and I lost the camera on the last day.

‘It means all my memories from this wonderful country are gone. I would love to have them back.

‘The pictures of my trip with my 80-year-old grandparents are inside as well and since recently my grandma can’t walk anymore so I know I will never take her to a trip anymore and I would love to have these memories.’

Ms Mika told MailOnline the pictures were very important to her – having started her project in November 2017.

She added: ‘I keep faith, I know the world is full of good people and internet can be magic’ (pictured: The appeal Ms Mika made)

The include images from Thailand, Bali, Australia, Florida and Europe but she says the ones from Scotland were ‘particularly beautiful and would have been an important part of the book I want to publish’.

She added: ‘If I’m lucky enough to reach the people who found my camera and if they were nice enough to send it back, I’d be so thankful and I would be really happy to welcome them in France in my region to take them around for a tour, as I was a tourist guide there.

‘And if they keep the camera, please at least send me back the SD card so that I can get my pictures. I believe we can all make a difference in someone’s life, once in a while, and the people who found my camera would make a big one in mine if they would return it.’

In an online appeal on her Facebook page on Tuesday, Ms Mika said the topless pictures were not ‘for catching attention, they are the reason I want to do everything to find my camera’.