‘I would like him in my team!’: Frenkie de Jong wants ‘amazing’ Robert Lewandowski to join him at Barcelona despite his own uncertain Nou Camp future as Man United target Dutchman

Barcelona’s Frenkie de Jong has revealed that he wants Bayern Munich’s wantaway striker Robert Lewandowski to join him in Spain next season.

De Jong’s comments came after Holland’s 2-2 Nations League draw with Poland, at the end of which the midfielder was spotted in conversation with the Bayern frontman.

The Dutch midfielder’s comments come after Lewandowski made it clear that he wants a fresh challenge this summer, and according to Football Espana, Bayern’s reluctance to sell him is the only stumbling block in a potential move.

According to Fabrizio Romano, De Jong was asked about his chat with the Polish skipper in a post-match interview, saying: ‘He’s an amazing player, one of the best in the world.

‘[His future] is up to him. But of course I would like to have Lewandowski in my team.’

However, De Jong may not be a Barca player for much longer, with Manchester United in talks to bring him to Old Trafford in a £65million deal.

Meanwhile, Lewandowski has been identified as the ideal striker to help Xavi build a side capable of challenging not only in LaLiga, but in the Champions League too. 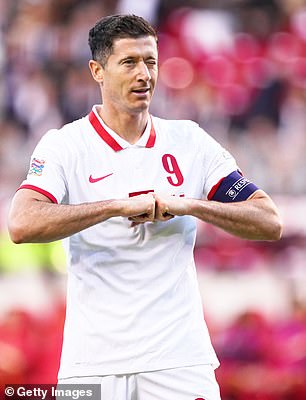 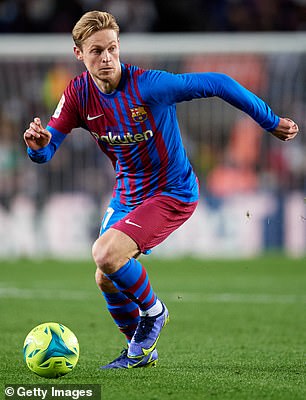 Frenkie de Jong answers on his conversation with Robert Lewandowski: “He’s an amazing player, one of the best in the world. It’s up to him [on his future to Barça]”. 🔴 #FCB

“Of course I would like to have Lewandowski in my team”, he added.@TheEuropeanLad

Initially, Barca will have been nervous at the news that French super club PSG were planning to dip into their considerably deeper pockets to offer the Polish forward a lucrative deal. 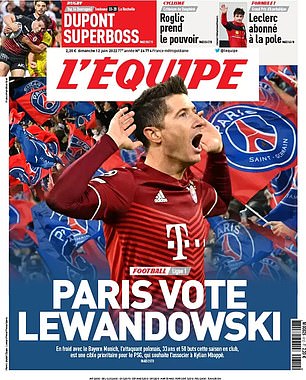 PSG have joined the race for Lewandowski

However, according to Mundo Deportivo, the Pole has already signed a three-year contract on around £175,000-a-week with Barca, worth £27m in total.

The striker has a year left on his contract, which means that any deal would require a fee and Bayern would surely expect to recoup a decent sum for one of Europe’s top marksmen, which would put Barcelona at a disadvantage due to their financial situation.

And it is in fact Lewandowski’s most recent advocate de Jong who could be sacrificed to make the deal happen, as he represents a quick way to make a sizeable profit given United’s interest.

United’s initial bid of £60m was reportedly rejected by Barcelona, who told the Premier League side they would need to up their offer to land Erik ten Hag’s top target De Jong. 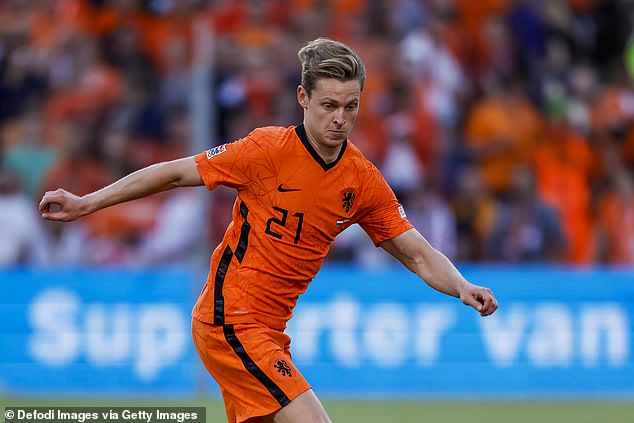 On international duty recently, Lewandowski said: ‘My era at Bayern is over. I don’t see any possibility to continue playing for this club anymore.

‘Bayern’s a serious club and I believe they won’t keep me, I don’t want to play there anymore. A transfer is the best solution. I hope they don’t stop me.’

The Bundesliga title holders have already identified – and bid for – Liverpool’s Sadio Mane, and Lewandowski’s departure could help raise funds for the move.

Lewandowski must now wait for Barcelona to sell number of players to make space on their wage bill before they can offer the Bavarian giants any money to complete the deal.