A comedian has sparked outrage after mocking an epileptic woman who had a seizure during his show.

Andrew Schulz, of New York, was performing in New Orleans on March 30 when audience members called out asking for medical help.

This occurred after a woman – who has not been identified – was taken out by paramedics.

Mr Schulz then took to the mic to make light of the shocking events in true stand-up comedian style.

While most of the of the crowd were in hysterics, one audience member took offence, causing a spat between the two.

Epilepsy Action has called the scene ‘appalling’ and urges people to be more understanding.

Andrew Schulz (pictured), of New York, has left epilepsy charities outraged after making a joke out of an audience member having a seizure during his show 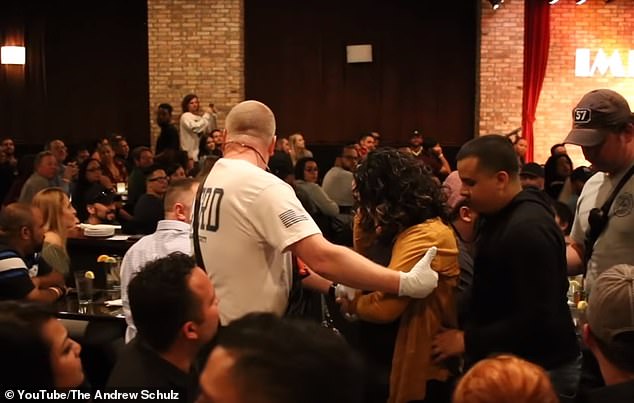 The woman, who has not been identified, was helped out by paramedics (pictured) 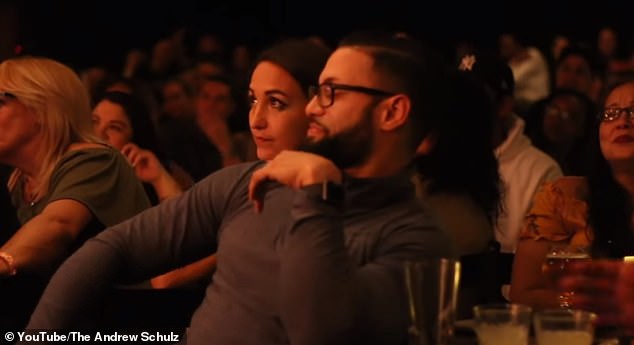 One audience member was not amused by the joke, leading to an attack from Mr Schulz

On April 7, Mr Schulz posted a ten-minute video to his YouTube channel, which has been seen 79,600 times.

He wrote: ‘This was wild. I was doing shows in Orlando and all the sudden a woman in the audience passed out. Turns out she was having a seizure.

‘It was crazy but hey, the show must go on.’

The video shows the organisers rushing to the woman’s aid after an audience member called out for help.

Not long after, Mr Schulz returns to the stage as the epileptic woman is slowly led out. He asks her if she is okay and reassures her ‘not to be embarrassed’.

After the woman left, he impersonated her shaking body during the seizure and said: ‘In your mind you’re not thinking anyone is going to die.

‘So when you see her laughing like really going, you’re like, “Yo this girl got a sense of humour”.’

He adds further jeers such as, ‘I’m going to roast this b**** for almost dying at my show’.

In a shortened clip posted to Mr Schulz’s Twitter account yesterday, which has had more than 105,000 views, he added further fire to the fuel as he is seen mocking a concerned member of the audience.

One woman, who turned out to be a paramedic, called out, ‘That’s not funny’, to which Mr Schulz replied: ‘White women are something special. A b**** almost died and you made it about you.’

As the woman tried to explain why she was upset, he further aggravated the situation by telling her he ‘didn’t care’.

While Mr Schulz’s fans have praised the comedian for carrying on his show, Epilepsy Action have condemned his actions.

Hattie Hodgson-Crome, a spokesperson for the charity, said: ‘We are so shocked about this. People with epilepsy do not chose to have seizures and are incredibly vulnerable when they do.

‘We were appalled to see Andrew Schulz openly mocking someone for having a seizure at his show.

‘Epilepsy Action knows that nearly 90 per cent of people with epilepsy worry about having a seizure in public.

‘Epilepsy isn’t a laughing matter, nor a choice for people with the condition, who deserve to be treated with respect and understanding.’

After radio host Anna Hummel revealed she found the humour ‘so good’, one Twitter user shared her outrage and said she felt ‘sickened’

The charity added that radio host Anna Hummel had worsened the situation by laughing about the evening’s events on social media.

In an Instagram video, Mrs Hummel – a host at 102.5 The Bone in Tampa Bay – is heard saying, ‘Never have iIbeen to a comedy show where a chick has an epileptic seizure in the middle of the show.

‘The headliner Andrew Schulz gets on stage and starts roasting the b****. It was off the chain, so good.’

Her comments prompted the Epilepsy Foundation in Florida to confirm they were holding talks with the radio station on April 2, but it is unclear what happened next.

Epilepsy affects around one in every 100 people in the UK and 1.2 per cent of the US population.

Epilepsy Action added: ‘Epilepsy is the most common serious neurological condition in the world.

‘A lot of people with the condition live with the risk that they could have a seizure at any time, often without warning.

‘People with epilepsy have to deal with both the physical and emotional challenge of having seizures, as well as battle negative public attitudes about their condition.’

Epilepsy is a condition that affects the brain and leaves patients at risk of seizures.

Around one in 100 people in the UK have epilepsy, Epilepsy Society statistics reveal.

And in the US, 1.2 per cent of the population have the condition, according to the Centers for Disease Control and Prevention.

Anyone can have a seizure, which does not automatically mean they have epilepsy.

Usually more than one episode is required before a diagnosis.

Seizures occur when there is a sudden burst of electrical activity in the brain, which causes a disruption to the way it works.

Some seizures cause people to remain alert and aware of their surroundings, while others make people lose consciousness.

Some also make patients experience unusual sensations, feelings or movement, or go stiff and fall to the floor where they jerk.

Epilepsy can be brought on at any age by a stroke, brain infection, head injury or problems at birth that lead to lack of oxygen.

But in more than half of cases, a cause is never found.

Anti-epileptic drugs do not cure the condition but help to stop or reduce seizures.

If these do not work, brain surgery can be effective.