John Major’s government was left reeling after the disastrous launch of plans to commemorate the fiftieth anniversary of D-Day.

Wartime icon Dame Vera Lynn even threatened to pull out, prompting the government to come up with far more sombre events in keeping with the many lives lost during the invasion.

John Major’s government was left reeling after the disastrous launch of plans to commemorate the fiftieth anniversary of D-Day. Mr Major is pictured outside Downing Street in 1993

The administration was so blindsided by the singer’s unexpected activism, that they worried about ‘Vera Lynn causing trouble’ at future commemorative events.

And although the new arrangements were more favourably received by veterans’ groups, but the commemoration still did no go smoothly, as revealed in a new dissection of the events.

Entitled ‘D-Day Post Mortem’, Principal Private Secretary Alex Allan reassured Major that the weekend ‘went splendidly’, but that there were ‘inevitably some points to learn from’.

At the service at Bayeux Cemetery, for instance, the proceedings kicked of late ‘thanks to Mitterrand’, he wrote in the documents.

‘But after the service we almost had literally to fight the Prime Minister through the crowds of veterans: there should have been some marshalling or some attempt to keep the veterans behind barriers’.

The Omaha beach event was not ‘particularly memorable’, Allan wrote, ‘but that was a French responsibility’.

Another unfortunate issue was the order of arrivals for the representatives of different forces.

‘I know that the Canadians found it somewhat frustrating always to be next to last in protocol order (with only the Greek Defence Minister behind them) at every event. 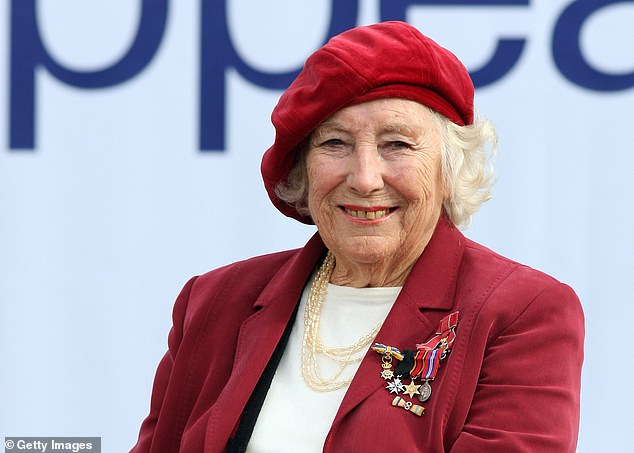 Wartime icon Dame Vera Lynn (pictured in 2009) even threatened to pull out, prompting the government to come up with far more sombre events in keeping with the many lives lost during the invasion

‘They commented rather pointedly that they came well behind the Grand Duke of Luxembourg even though Luxembourg has only two living World War II veterans’, he revealed.

‘The South Africans are a bit fed up of not being invited to any of this year’s events. We will certainly need to address this next year’, he added.

The ceremony at Whale Island, Portsmouth Harbour, was ‘hit by bad weather’ leading to empty seats, while the choice of hymns at Drumhead Service were ‘uninspiring’ and not ones ‘that people could sing with gusto’.

Perhaps most unfortunately, Allan writes, was the decision to allow TV cameras to film heads of state and their wives arrive for a grand dinner at the Guildhall in London.

‘I think a decision should have been taken not to subject foreign heads of State and Government to walk up the Guildhall stairs. I understand the desire to keep the television pictures [rolling], but it was pretty undignified for the wives to have to walk up the steps clutching their skirts and their hair in the very strong winds.’

The debacle left its mark on the government, as planning was underway for 1995’s VE and VJ Day celebrations.

As aides agonised over whether Major himself should kick off the events, they hoped there would be ‘no danger of a spam fritter type rebound (eg Vera Lynn causing trouble)’.

Alex Allan even appeared to try and strong-arm Field Marshall Lord Bramall into obtaining a guarantee that veterans would not criticise the latest round of commemorative plans.

‘One thing that caused particular problems last year was unhelpful comments by veterans, the British Legion and others.

‘These were often given hastily and based on misconceptions about the plans, or were criticisms of the Government that were being planned wholly by private individuals or groups – the notorious spam fritter competitions for example.

‘If the Prime Ministers were to do the launch of the VE and VJ Day commemorations, in January, he would want some reassurance that the plans would be fully supported by all the relevant veterans organisations, and that they would be willing to say so publicly’, Allan urged.