EU leaders have agreed a £680billion Covid-19 rescue deal for the bloc after fiery talks where Emmanuel Macron is said to have bashed the table and hit out at Austrian premier Sebastian Kurz for leaving the room to make a telephone call.

The summit is viewed as one of the longest and most ill-tempered in the EU’s history, stretching into a fourth night last night before agreement was made early this morning.

The French president also even accused Dutch premier Mark Rutte of behaving like former prime minister David Cameron, known for taking a hard line at EU summits, because he was angry that £450billion of the package would be handed out in grants.

But Mr Macron is said to have mocked Mr Rutte by reminding him it ‘ended badly’ for Mr Cameron over Brexit.  German Chancellor Angela Merkel also walked out of the talks in Brussels on Saturday night after in frustration at the stalemate.

Yesterday, in a sign of how fraught the summit has been, Mr Rutte insisted: ‘We’re not here so we can go to each others’ birthdays for the rest of our lives. We’re all here to defend the interests of our own countries.’

But as the summit entered its fifth day chairman Charles Michel tweeted ‘Deal’ shortly after the 27 leaders finally reached agreement at around 4.30am after the level of grants was cut by £100billion to £350billion with £330billion in loans. 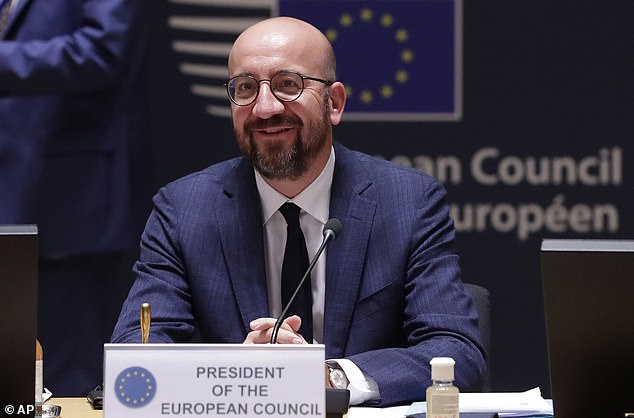 Chairman Charles Michel, President of the European Council, tweeted ‘Deal’ shortly after the 27 leaders finally reached agreement at around 4.30am as talks entered a fifth day 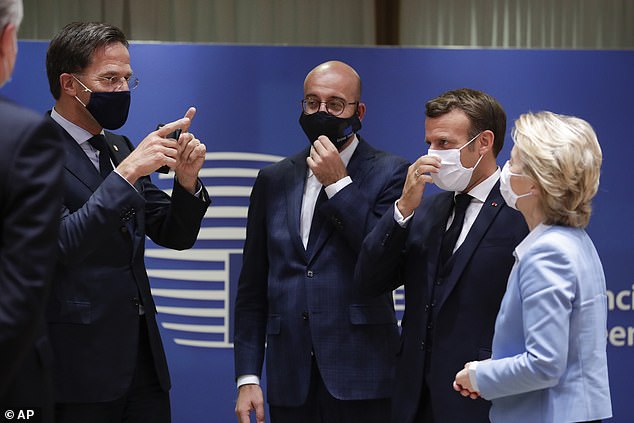 ‘This agreement sends a concrete signal that Europe is a force for action,’ Michel said at a dawn news conference

‘It is about a lot more than money. It is about workers and families, their jobs, their health and their well-being. I believe this agreement will be seen as a pivotal moment in Europe’s journey, but it will also launch us into the future.’

French President Emmanuel Macron said the deal was ‘truly historic’ and that he was convinced the recovery plan and budget could meet the challenge of the coronavirus pandemic.

‘This was a summit whose conclusions are truly histroric. We have put in place the capability to borrow collectively, to put in place a collective recovery plan, for the first time,’ Macron said. ‘With this recovery plan, we will reach a near doubling of the European budget over the next three years.’

The leaders had been deadlocked for days over a proposed £680billion rescue fund to deal with the economic fallout from Covid-19.

A group dubbed the ‘frugal five’ – the Netherlands, Austria, Finland, Sweden and Denmark – had refused to accept Germany and France’s idea for £450billion to be grants.

Last night a possible compromise cutting the amount of grants to £350billion with the other £330billion in loans was on the table – and this appears to have been the one accepted.

The Netherlands was in particular pushing for countries who receive grants to commit to public spending reforms and to uphold the rule of law. There was also anger that the richer EU states would have access to grants.

The Hague has accused southern economies such as Italy of being ill-prepared for the crisis due to mis-handling their finances.

The summit began on Friday and was only meant to last two days. The leaders also want to strike a deal on the £1trillion budget for 2021-2027.

Officials said the deal, which came after Michel presented compromises on a 750 billion euro recovery fund, is critical to dispel doubts about the bloc’s very future.

Michel proposed that within the 750 billion euro fund, 390 billion should be non-repayable grants, down from 500 billion originally proposed, and the rest in repayable loans.

The EU was slow to coordinate its initial response to the COVID-19 pandemic and, already weakened by Britain’s departure from the bloc, a united front on economic aid would demonstrate that it can step up to a crisis and stay united.

But the tortuous summit looked like failing at times with Europe split between north and south.

‘It’s breathtaking to see that we have done it. We have reached a huge milestone setting up the future of the European Union,’ said European Commission Presidentr Ursula von der Leyen, after almost 100 hours of negotiations.

The summit approached the record length set at a 2000 meeting in the French city of Nice of almost five full days. 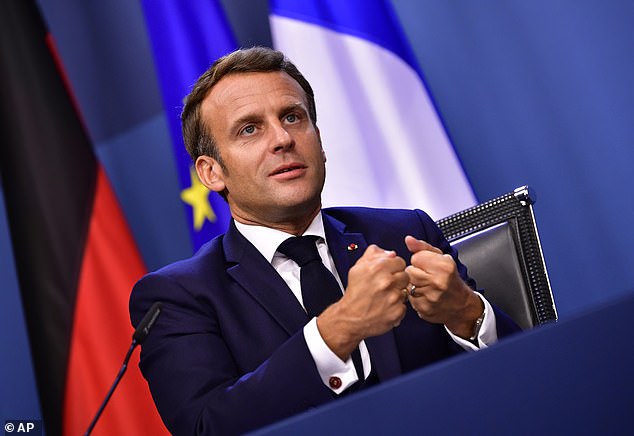 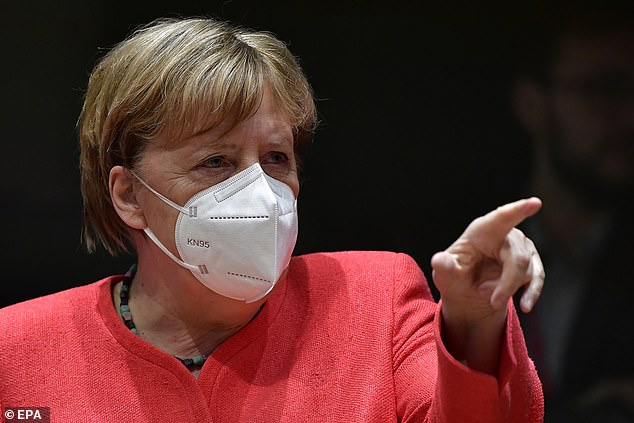 Mr Macron had already expressed cautious hope of reaching agreement as talks resumed in the Belgian capital last night, having finished at 5.30am earlier in the day.

He said: ‘There’s a spirit of compromise, there have been some very tense moments and some moments that will no doubt be difficult again. But things have moved forward.’

The stakes at the summit were high with EU economies in freefall as Europe faces its deepest recession since World War Two, initial relief measures like short-time work schemes running out this summer, and fears that autumn could see deep economic malaise and social discontent.

Diplomats said failure would have risked further damaging a bloc struggling with Brexit and bruised by crises from the financial meltdown to migration feuds, exposing it to more eurosceptic, nationalist and protectionist forces.

Emotions had ran high at a dinner on Sunday as a group of fiscally frugal northern nations led by the Netherlands stood their ground on the level of free grants within a proposed special recovery fund of 750 billion euros overall.

Macron lost patience in the early hours of Monday, banging his fist on the table in frustration at “sterile blockages” by the “frugals”, two diplomats said.

Polish Prime Minister Mateusz Morawiecki also railed against the “frugals”, branding them “a group of stingy, egotistic states” that looked at things through the prism of their own interests.

Poland would be a top beneficiary of the recovery package, receiving tens of billions of euros in grants and cheap loans, along with high-debt Mediterranean-rim countries that have taken the brunt of the pandemic in Europe.