British Foreign Secretary Boris Johnson, left, met Acting US Secretary of State John Sullivan on the sidelines of the meeting to express concern over the fate of the Iran nuclear deal

The foreign ministers of the Group of Seven industrialized nations met in Toronto on Sunday seeking a common front against what they see as aggression from Vladimir Putin’s Russia.

The envoys were also keen to glean clues from their US colleague about whether President Donald Trump will tear up the Iran nuclear deal and how he will handle a planned summit with North Korea’s Kim Jong Un.

The ministers from the world’s most powerful democracies are in part meeting to set the stage for June’s G7 summit of rich-world leaders in Charlevoix, Quebec — but Russia and North Korea were never far from their minds.

Canada’s Foreign Minister Chrystia Freeland hosted the meeting and invited her G7 colleagues plus the European Union’s representative to a working lunch to discuss the crisis in Ukraine, where Russian-backed rebels have seized the eastern Donbas region.

Afterwards, she said the G7 members had “reaffirmed our unity in support of Ukraine and a rules-based international order where state sovereignty and territorial integrity are respected by all.

Acting US Secretary of State John Sullivan’s first bilateral meeting was with Ukraine’s Foreign Minister Pavlo Klimkin, to reaffirm “the United States’ ironclad support for the sovereignty and territorial integrity of Ukraine in the face of Russian aggression.” 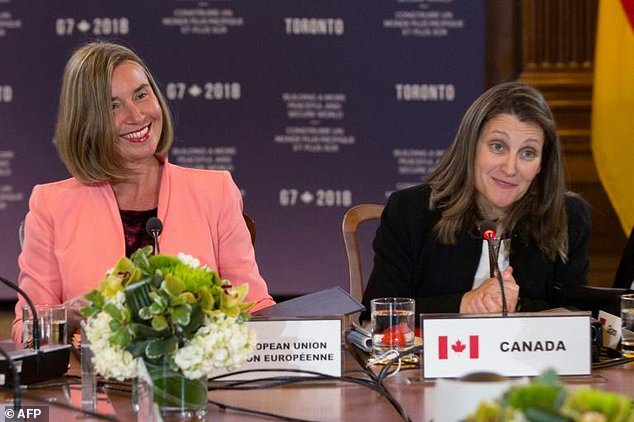 Canadian Foreign Minister Chrystia Freeland (L) and the EU High Representative for Foreign Affairs and Security Policy, Federica Mogherini, opened a meeting of G7 ministers with a tribute to their female counterparts around the world

G7 capitals are also worried about Russia’s support for Syrian leader Bashar al-Assad’s regime in his country’s brutal civil war and alleged attempt to kill a defector with a nerve agent on British soil.

France’s President Emmanuel Macron, who meets Trump on Monday at the White House, said in an interview that the West must stand up to Putin’s attacks on western democracy, including the spreading of “fake news.”

“He’s strong and smart. But don’t be naive. He’s obsessed by interference in our democracies,” Macron told “Fox News Sunday.”

“That’s why I do believe that we should never be weak with President Putin. When you are weak, he uses it.”

After their lunch, the ministers held a meeting on North Korea and nuclear non-proliferation.

Last month, in one of the most surprising twists in world affairs for decades, Trump accepted an invitation from Pyongyang’s eccentric autocrat Kim to a summit to discuss to discuss his nuclear disarmament.

The G7 members, including frontline state Japan, support efforts to convince Kim to end his efforts to develop a strategic nuclear missile arsenal, but are also keen to hear more from the US side.

Kim is sure to make demands of the West, and allies are keen to ensure that Trump does not give too much away to secure a historic deal.

The North Korea meeting will be followed by one of the so-called “Quad” — the United States plus Britain, France and Germany, the Western partners who, with China and Russia, signed the 2015 Iran nuclear deal.

Trump has threatened to tear up the agreement unless European capitals agree to supplement it with tougher controls on Iran’s missile program and future ability to return to nuclear fuel enrichment.

But his partners continue to believe the implementation of the agreement under the Joint Comprehensive Plan of Action (JCPOA) represents the best way to prevent Tehran from seeking the atomic bomb, and will not miss a chance to lobby Sullivan to convince Trump to reverse course.

“We’ve been negotiating with the Europeans,” a senior US official told reporters ahead of the talks. “We’ve made a great deal of progress but we’re not there yet.”

Ahead of the Quad meeting, Sullivan stepped aside for a brief one-on-one meeting with British Foreign Secretary Boris Johnson.

As the pair sat down in the office of the chancellor of the University of Toronto, Johnson could be heard telling his US counterpart “one of the things we are concerned about now is the JCPOA and where that is headed.”

Ahead of Sunday’s meetings, the US official had briefed reporters that the talks would focus on the way forward in Syria, Iran’s alleged “malign activities” in the Middle East region and North Korea’s missile and nuclear programs.

The ministers would also, he said, discuss maritime security in the context of protecting freedom of navigation in the South China Sea in the face of China’s moves to reinforce its disputed claim on the waters.

After the foreign affairs meetings, the ministers will be joined on Monday by their domestic security counterparts and the discussions will be widened to encompass counterterrorism and cyber security.