Gas station worker accidentally sets price of midgrade at $0.28 a gallon instead of $2.89

Wisconsin gas station loses $3,500 after worker accidentally sets price of midgrade to a TENTH the price at 28 cents a gallon – sparking a rush of more than 100 people filling their tanks before the mistake was noticed

More than 100 people raced to a Wisconsin gas station after a worker accidentally set the price of midgrade to 28 cents per gallon instead of $2.89.

Police responded to the BP business in Brookfield after reports of a suspicious number of vehicles coming and going to the spot on Monday.

Once at the gas station the officer realized there was no wrongdoing through damage to machines or tampering, it was simply human error.

The imputing mistake for ‘Silver’ midgrade was made by a clerk before they closed at 9pm – it meant that drivers could fill-up for a tenth of the price they would normally pay.

Some paid less than five dollars for a tank’s worth of gas and more than 100 people in total took advantage of the price drop, ABC7 reported.

Drivers eager to fill their tanks for $0.28 a gallon raced to a Brookfield BP station in Wisconsin on Monday. The price of midgrade normally set at $2.89 was exceptionally low due an employee’s imputing error 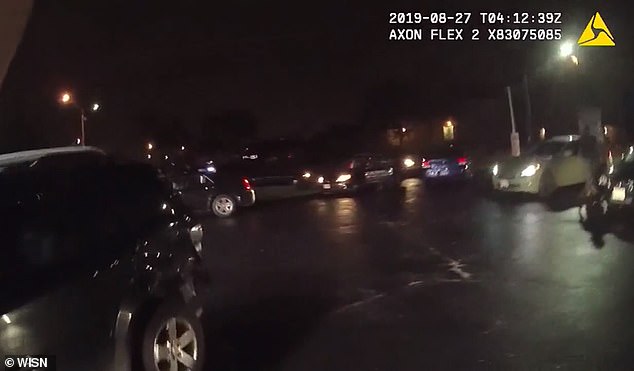 Over 100 people took advantage of the mistake, a long line of vehicles (above) could be seen waiting to fill up for a tenth of the price they would normally pay

BP were quickly notified of the error and altered the price back to $2.89 per gallon, but not before they had lost more than $3,500 in total revenue, they said.

The price of gas had not been that cheap since the 1950s, the Department of Energy told ABC.

Body camera footage from one of the officers on the night at 124th street and Burleigh showed a long line of cars all waiting to take advantage.

‘Is this like opening weekend or what?’ one officer muses.

‘There’s nothing suspicious going on it’s literally people waiting for gas,’ another reports back over his radio.

‘Excuse me, mind telling me what is going on here?’ the officer asks one of the customers.

‘How much is it?’ the officer asks before the video ends. 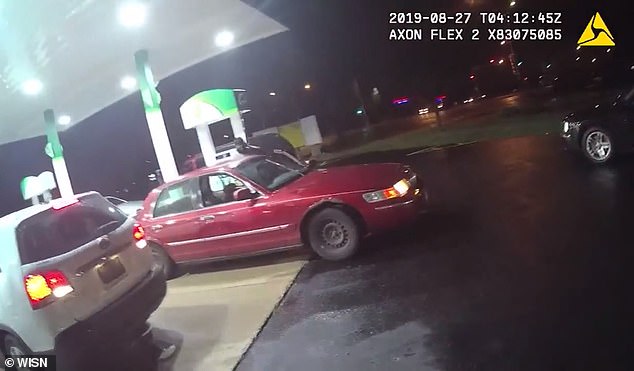 Officers were called to the scene after fears of tampering or damage causing the price drop – the business reported losing over $3,500 from the mistake 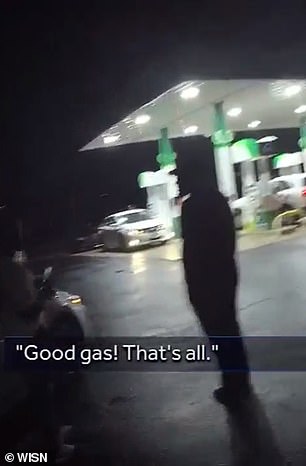 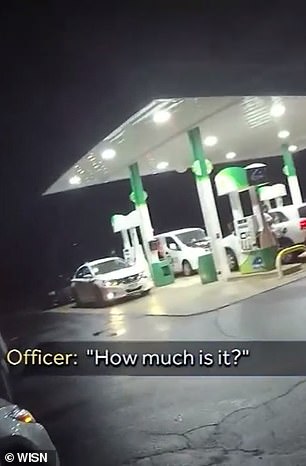 When officers attended the scene they asked why the location was so busy, ‘Good gas! That’s all,’ the customer replied (left). To which he quizzed, ‘How much is it?’ (right)

The following day, after prices had returned to normal, ABC asked people what they thought of cheaper rate.

‘I wish I could fill my gas tank for under five bucks,’ said one man who had paid over $41 for his gas that day.

Another who was quizzed over the amount they paid, replied ‘guess’ with a dissatisfied look.

DailyMail.com contacted Brookfield Police Department and the BP gas station for comment, neither responded before the time of publishing.