Sara is reportedly enjoying a new romance with Sydney insurance broker Dion Guest, four years after her split from the former champion swimmer.

According to the Daily Telegraph, Guest has moved to Tasmania where Sara lives with her two daughters, Gigi and Milla, and the couple are now living together.

Geoff Huegill’s ex-wife Sara Hills is now enjoying a romance with Sydney insurance broker Dion Guest. She appears on his Instagram avatar with her two daughters

The pair have been leaving sweet comments on each other’s Instagram photos and Sara appears in Guest’s Instagram avatar with her two girls.

The mother-of-two has battled through a string of controversies over the years after she and her former husband made headlines in 2014 when they were found in a suite at Royal Randwick with a small quantity of cocaine.

In August that year, a magistrate found that Sara had a mental illness and was suffering from ‘adjustment, depressive, eating and substance abuse disorder’. 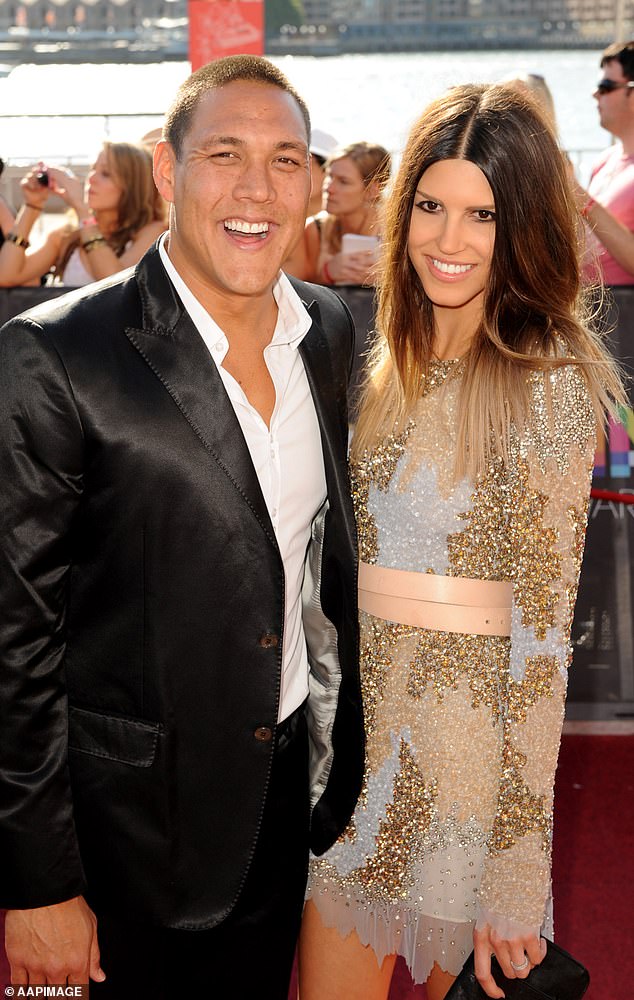 They also acknowledged the socialite’s remorse and dropped the charge on mental health grounds.

Sara’s lawyer had previously said in a statement that she was being treated for issues related to anxiety and depression.

Earlier this year, Geoff discussed how the couple’s marriage fell apart after he and his former wife were charged with cocaine possession in 2014 on SAS Australia earlier this year.

He broke down as he revealed the awful impact that fateful night had on his family.

‘We got pulled aside by the police and I was searched. And basically in the blink of an eye, our life turned upside down,’ he said during an interrogation with the show’s Directing Staff.

‘I was carrying a lot of shame and a lot of guilt that I’d put my family through that process. And it led me to a point where I had to make the call to leave my family.’ 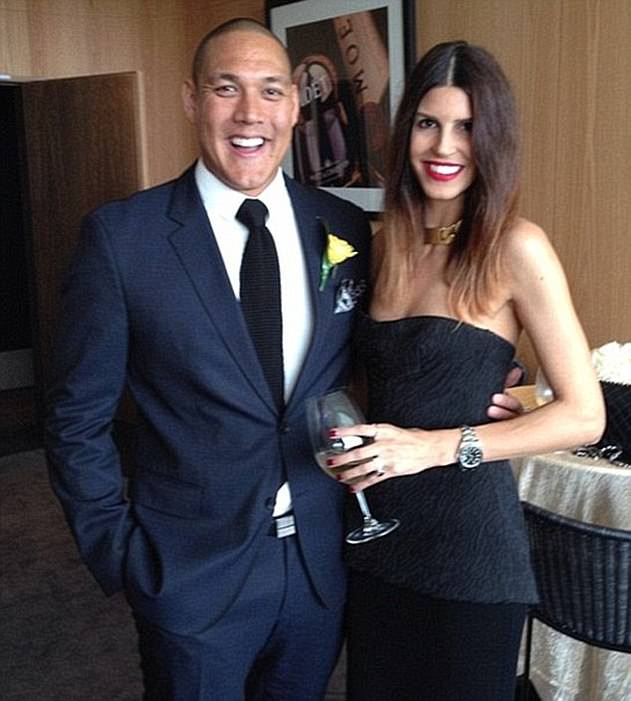 Geoff and Sara were at Royal Randwick racecourse on April 26, 2014 (pictured) when they were caught on CCTV cameras entering a disabled toilet together. The Huegills were guests at the running of the Australian Turf Club’s $400,000 race, the Champagne Stakes, which is sponsored by Moet & Chandon

Geoff and Sara married in 2011 and split in 2018. The couple share two daughters, Mila, nine, and Gigi, seven.

‘I definitely have regret. My biggest one would be not being in my kids lives on a daily basis, because of our marriage separation,’ he went on.

‘That’s been a big eye opener because as you guys know life gets taken away from you in a blink of an eye,’ Geoff added, as he broke down. 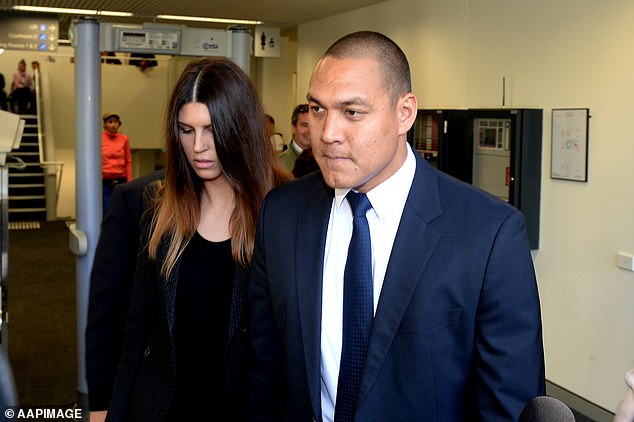 Police noticed the couple stayed in the toilets for some time. When the Huegills re-emerged and returned to the Moet & Chandon private box, police interviewed and around 5.45pm allegedly took possession of a small bag of cocaine. Pictured at court in 2014

‘It’s something that I loved and wanted to be. It hurts me to be in a position where I don’t get to live with my girls on a day to day to day basis. The last time I got to hold them was 18 months ago.

‘I lost my family basically and everything changed in a blink of an eye.’

The athlete admitted that he had periods of depression since the marriage breakdown, but now hoped to redeem himself.

‘I’ve had times where I sat there and thought there would be an easier way out. But I’m very proud of the fact that I’ve been able to pull myself out of some pretty dark times,’ he said.

‘If there’s ever a message I want to share with my kids, it’s to get them to understand and recognise that life isn’t going to be easy. The most important thing is how we pick ourselves up and dust ourselves off. ‘

Geoff was at Royal Randwick racecourse on April 26, 2014 with his wife when they were caught on CCTV cameras entering a disabled toilet together.

The Huegills were guests at the running of the Australian Turf Club’s $400,000 race, the Champagne Stakes, which is sponsored by Moet & Chandon.

Police noticed the couple stayed in the toilets for some time. When the Huegills re-emerged and returned to the Moet & Chandon private box, police interviewed and around 5.45pm allegedly took possession of a small bag of cocaine.

A group of police then made a detailed search of the area with a sniffer dog.

‘Police were patrolling Randwick Racecourse as part of their normal duties,’ a NSW police spokesman told the MailOnline. 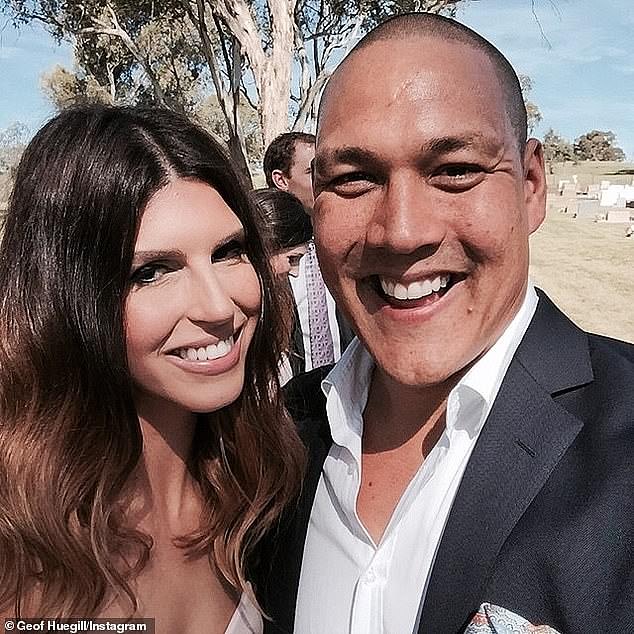 Geoff and Hills apologised to their two daughters after pleading guilty to cocaine possession. ‘The two most important people that we want to apologise to our two beautiful daughters,’ Huegill said

‘They were directed to a suite in the grandstand by security guards where a 35-year-old man and a 30-year-old woman were allegedly found with a small quantity of white powder, believed to be cocaine.’

The Daily Telegraph reported Geoff was seen being escorted from the Moet & Chandon lounge by police.

Geoff and Sara apologised to their two daughters after pleading guilty to cocaine possession.

The pair were both handed six-month good behaviour bonds without convictions at Waverley Local Court in May 2014, after they were caught with the drug at Sydney’s Randwick Racecourse.

He said at the time they were relieved the incident had been dealt with and offered up apologies outside court to his daughters.

‘The two most important people that we want to apologise to our two beautiful daughters,’ Geoff said.

In October last year, Geoff ‘quietly’ welcomed a baby boy with a woman known only by the name Roxy. 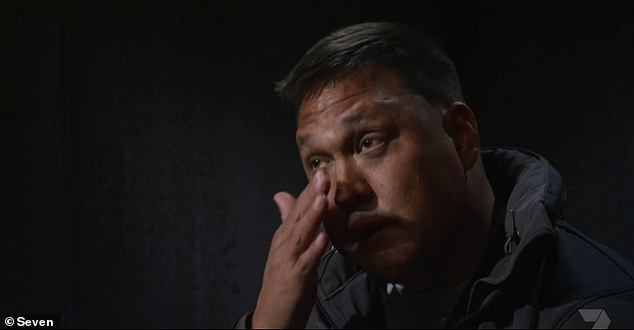