A giant shrine to the late singer George Michael has been cleared today after a year and a half-long battle between fans and his north London neighbours.

The Wham! star was found dead at his house in Goring-on-Thames in Oxfordshire on Christmas Day 2016. He was 53.

Since that day fans have travelled there and to his other house in Highgate to pay their respects with flowers, candles and framed photographs.

But local conservationists and neighbours in both areas have slammed the shrines, which over a year on have been described as a ‘soggy, tacky mess’.

After the singer’s family posted repeated statements urging followers to stop, today the shrine outside his £10.5million north London home was finally dismantled.

Before: Floral tributes had been outside George Michael’s north London home in Highgate village for nearly a year and a half and were maintained by fans 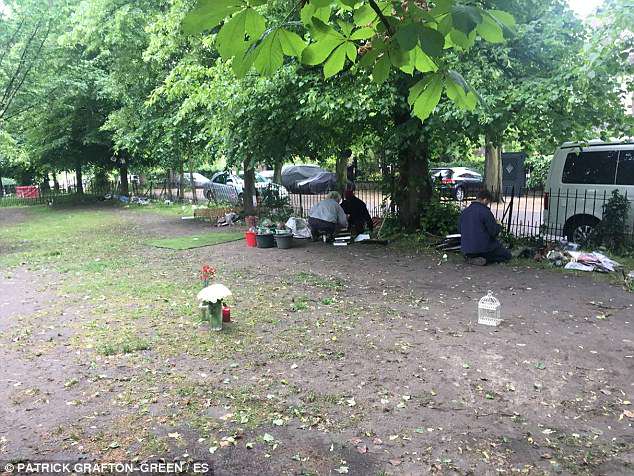 After: But today they have been cleared after work started to remove them on Monday 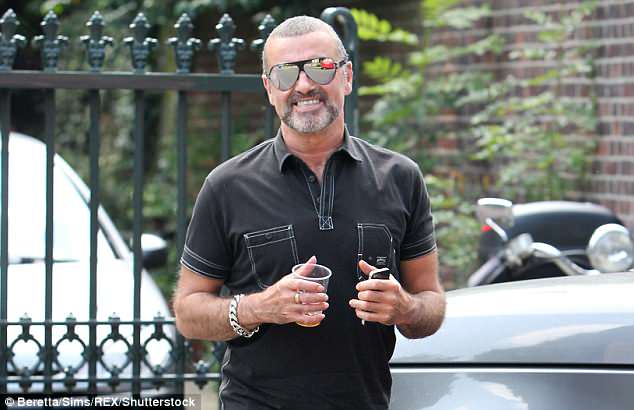 Michael, who died age 53 on Christmas Day 2016, is pictured outside his Highgate home

A group of people who appeared to work for a private garden company started removing it on Monday.

One woman at the scene, who asked not to be named, told the Evening Standard: ‘We will keep what is salvageable and pass it on to the family. I don’t want them (George Michael’s fans) feeling we are being disrespectful.

‘Everything that is charitable will be passed on to charities. That’s something George Michael would have wanted.

‘This does have to be done, this is what the family have said they want to happen.’

Michael’s family urged fans to not continue building up the shrine via a statement on his website earlier this month.

A statement, written by Mr Michael’s sisters Mel and Yioda, father Jack and friend David Austin, said that they were ‘touched by your many tributes celebrating and remembering’ him. 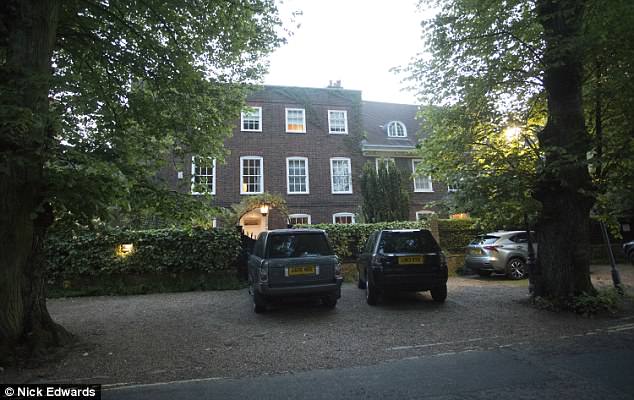 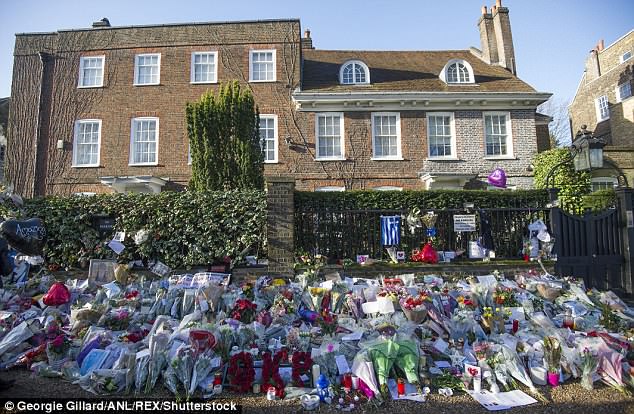 Since the day he diedfans have travelled there and to his other house in Highgate (pictured) to pay their respects with flowers, candles and framed photographs

It read: ‘However, we feel we cannot expect our Highgate and Goring neighbours to continue to accept as normality, the memorials so personal to you all, to remain as and where they are any longer.’

They requested that supporters, who call themselves ‘lovelies’, to instead make a donation to charity as an alternative tribute.

There was a mixed reaction among fans, with others suggesting a gold statue to replace the floral arrangement at his Goring-on-Thames home.

Plans for the monument were however rejected by the local council in January this year.

Speaking at the time neighbourhood group in the exclusive north London village slammed the tributes. 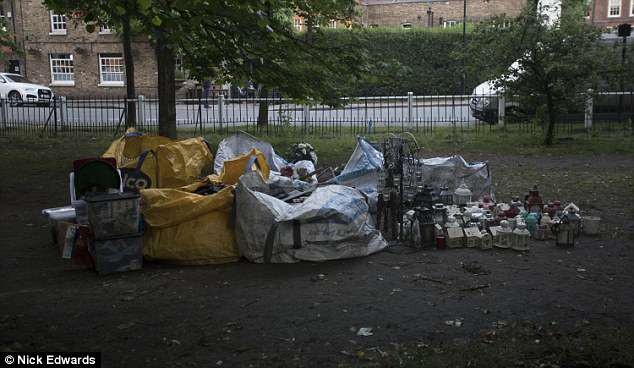 Michael’s £10.5million north London home was cleared of tributes (pictured), which were piled up and taken away 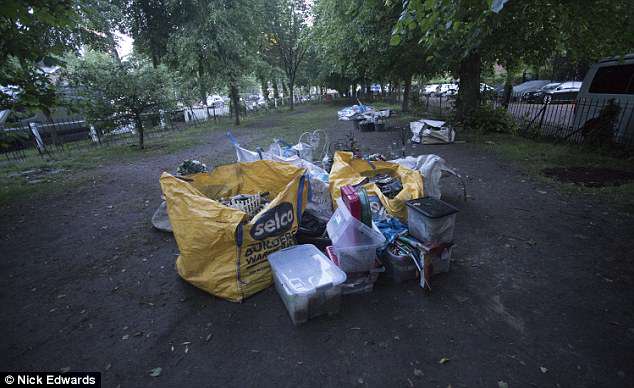 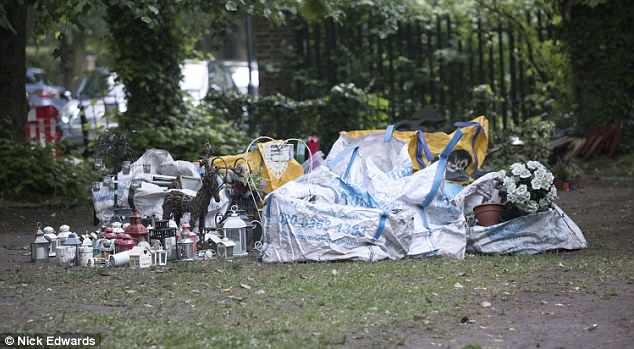 Lanterns, candles and floral tributes are pictured bagged up after this week’s clean-up 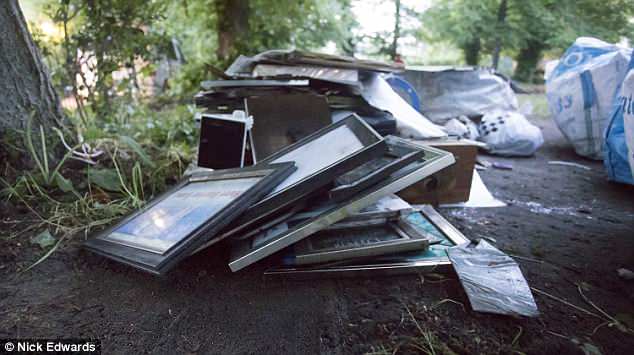 Framed pictures of the Wham! star were collected in a pile and were taken away today 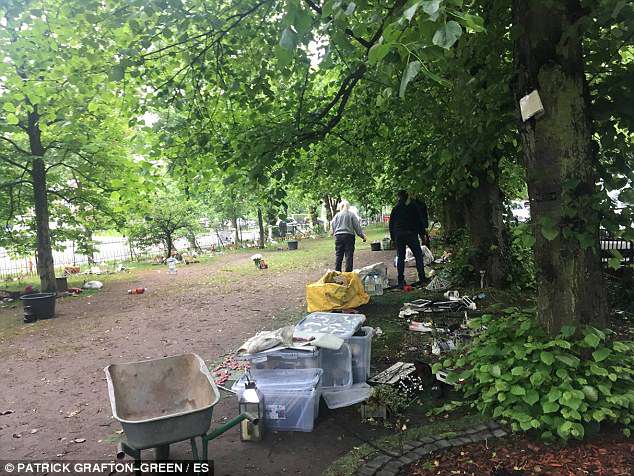 A group of people who appeared to work for a private garden company started removing it in Highgate, north London on Monday 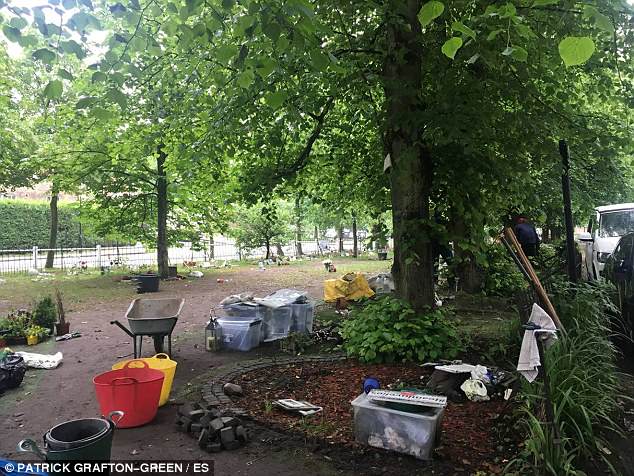 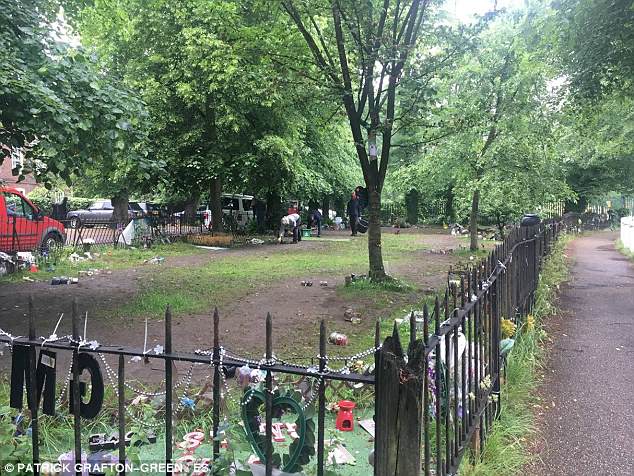 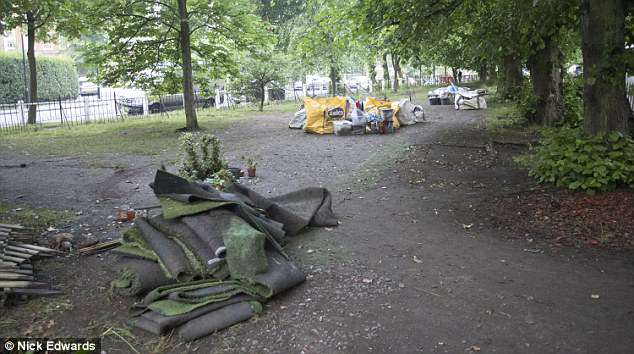 Susan Rose, chair of the Highgate Conservation Area advisory committee told The Telegraph Michael’s shrine has become a ‘terrible’ mess and is proving a nuisance for residents.

She told the newspaper: ‘The land belongs to the estate but that’s the problem, there’s nothing we can do,’ she said.

‘One wonder’s what George Michael would think of it all outside the beautiful home that he looked after so well, and right where erected a wonderful Christmas tree every year.

‘Jamie Oliver and Jude Law live locally. I can’t imagine they are overly happy about it all.’ 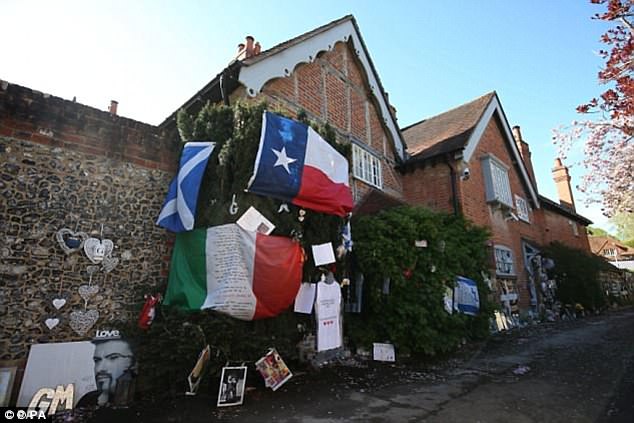 Michael’s country home, where he was found dead, in Goring-on-Thames, Oxfordshire was also covered in tributes, including flags of fans’ home countries 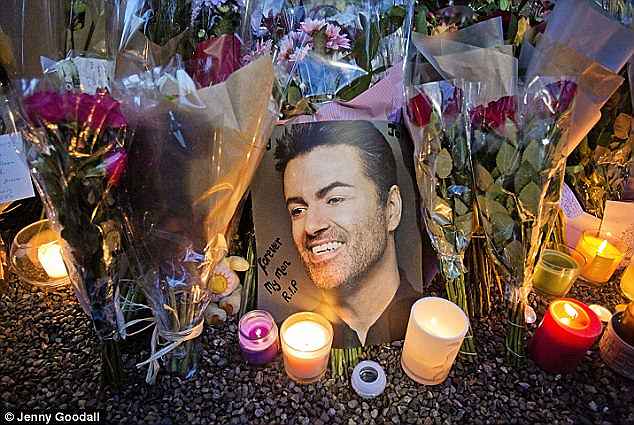 Local conservationists and neighbours in both areas have slammed the shrines, which over a year on have been described as a ‘soggy, tacky mess’