Germany has reported its fewest coronavirus deaths for two weeks and its lowest number of new cases since mid-March, as some shops begin to re-open today.

Like many countries, Germany typically sees a fall in numbers over the weekend when there are delays in reporting new cases and deaths.

This graph shows the daily number of coronavirus deaths in Germany. The 110 new deaths added to the tally today are the fewest since April 6 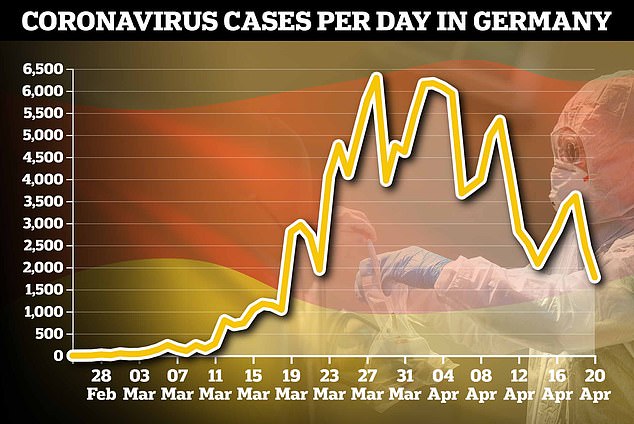 This chart shows the daily number of cases, which fell today to 1,775, the lowest figure since 1,042 new cases were added to the total on March 18

Germany’s 1.3 per cent increase in cases is the lowest since the crisis began, replacing last Tuesday’s previous low of 1.7 per cent.

The Robert Koch Institute, which collects the figures, also has a keen eye on the rate of contagion (R), which shows how many people each sick person is infecting.

R is currently estimated at 0.8, meaning that four out of five coronavirus patients infect one other person and the fifth does not pass on the disease.

Germany has identified an R rate below 1 as a key indicator of whether the outbreak has stabilised enough to allow a return to normal life.

Some regions are allowing shops to open for the first time in a month today in a cautious first step towards ending the lockdown.

The majority of stores smaller than 8,600 square feet (800 square metres) will be allowed to welcome customers again, including fashion stores and florists.

Angela Merkel agreed the loosening last week with the leaders of Germany’s 16 states, which are set to lift the restrictions at their own pace.

In some states such as the capital Berlin, reopening will take a little longer. 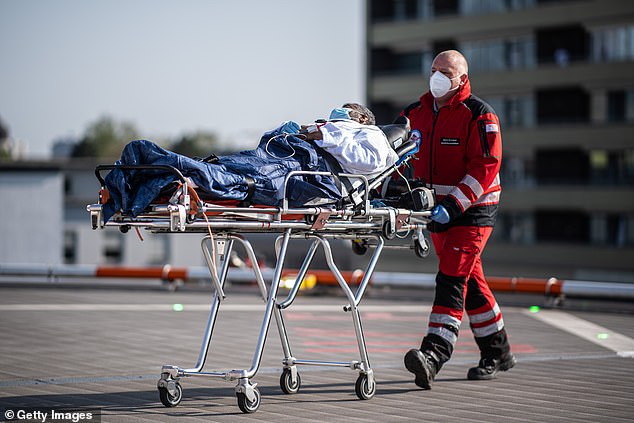 Health minister Jens Spahn declared the virus ‘under control’ when the R rate fell below 1, but Merkel has warned that Germany’s relative success is still ‘fragile’.

‘We will not be able to go back to our normal lives for a long time,’ said her party colleague Armin Laschet, the premier of North-Rhine Westphalia.

In an interview with Der Spiegel, Laschet warned that some coronavirus restrictions could last until 2021.

A ban on gatherings of more than two people and a requirement to stand more than 1.5 metres (5ft) apart from others in public areas remain in force.

That means that hairdressers, initially deemed an essential business, cannot open until at least May 4.

Cultural venues, bars, leisure centres and beauty salons will also remain closed for the time being.

Large-scale public events such as concerts and football matches have been banned until August 31.

With larger shops unable to open, the German Trade Association warned on Friday of a possible ‘distortion of competition’.

But economy minister Peter Altmaier defended the 800-square-metre limit, saying that ‘the belt can only be loosened bit by bit’. 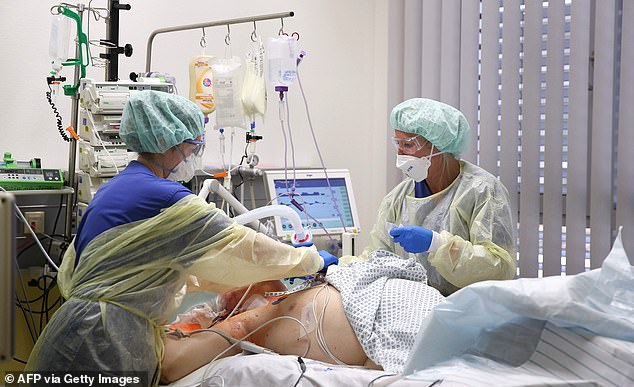 Schools will also be partially reopened in the coming weeks, with most states set to welcome back older students from May 4.

Education policy is traditionally decided at state level in Germany, and Bavaria, the region worst hit by the virus so far, will keep its schools closed for an extra week.

On April 29, regional education ministers are set to present concrete plans on how social distancing can still be enforced in the classroom.

Germany hopes to combine the lifting of restrictions with a more efficient tracing of the spread of COVID-19.

The country hopes to ramp up testing – it has already tested around two million people – and aims to produce around 50million protective masks, including 10million of the higher efficiency FFP2 standard a week from August.

Though not yet obligatory, Merkel said her government ‘strongly advises’ wearing a mask in public.

With more movement of the population expected as shops reopen, eastern states Mecklenburg-Vorpommern and Saxony have made masks obligatory on public transport.

In doing so, they have followed the example of the eastern city of Jena, which unilaterally enforced the wearing of masks earlier this month.

According to German media, the city has had no new cases in a week.