Gilbert & George tell Event their mission is not to shock, but to ‘de-shock’

The first thing you see at the new Gilbert & George exhibition is a picture of both men naked. ‘The human person is at the centre of everything we do,’ says Gilbert, an apparently mild-mannered Italian who has been working with his English partner George as a single artist for more than half a century.

They wear almost identical suits at all times, finish each other’s thoughts and have created one of the most acclaimed and provocative brand names in modern art. ‘Everyone finds themselves in our pictures. That’s the secret.’

Gilbert & George can usually be found in east London, where they share a home, walk the streets together every day in search of ideas and eat at the same Turkish restaurant every night. But instead they are picking their way across a courtyard in the stifling heat of Arles in the South of France.

Gilbert & George are radical artists but they are also devoted supporters of the Conservative Party – which Gilbert describes as ‘a death sentence’ in terms of acceptance by the art Establishment: ‘They think that art is Left’

‘These are supposed to be our summer suits,’ mutters George, the taller of the two, looking rather flustered but refusing to remove his jacket. ‘The way we look and the way we live are part of what we do, they always have been.’

The Great Exhibition (1971-2016) is a major retrospective at the new LUMA museum of modern art, on the edge of a city known for its connections with Picasso and Van Gogh. And as they walk around the former factory that is now a vast gallery, it becomes obvious that Gilbert & George love contrasts.

They may dress conservatively but their art is highly provocative, featuring swear words, bodily fluids and images of hatred and violence. ‘Our art is more human than that made by a lot of our contemporaries,’ says George. ‘It’s not academic. It’s not dry. Death, hope, life, fear, sex, money, race, religion… it’s all there.’ 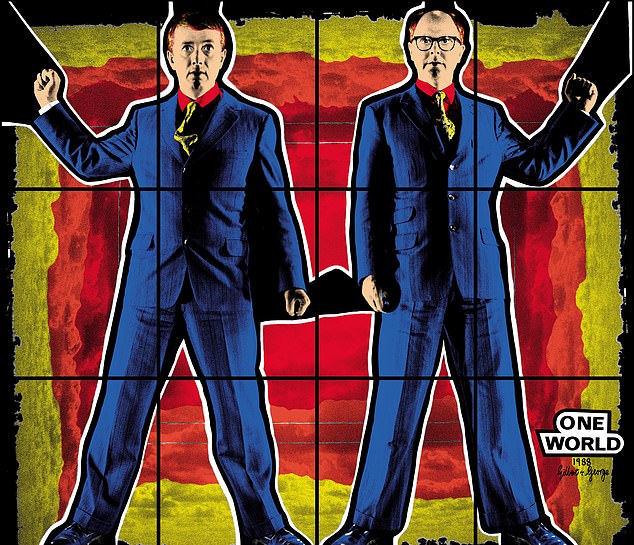 They may dress conservatively but their art is highly provocative, featuring swear words, bodily fluids and images of hatred and violence

They pose stiffly in their grey and green suits but are happy to have their pictures taken with fans in the gallery in T-shirts and shorts. It’s also obvious that Arles loves them.

‘A big show like this is a dream every artist has,’ says Gilbert. ‘The adoration, the admiration last night was extraordinary.’ The mayor came to the opening night and afterwards there was a party at the house of the Swiss art collector who is still building the LUMA – with its spectacular, twisted metal tower by Frank Gehry – and dancing in the main gallery space. But Gilbert says they went to bed early. ‘Our dancing days are over.’

We don’t fit into any particular mould. There is one goal: to succeed in art. We never compromise

They claim to be art outsiders but Gilbert & George won the Turner Prize in 1986 and were recently elected to the Royal Academy as a single artist – the first time in its long history that a pair has been given that honour. The director of the RA has flown here to see The Great Exhibition, a collection of 85 of their best large-scale images that will go on to Iceland and Scandinavia next.

So they’re world famous, but who are Gilbert & George, really? Are they partners in every sense? And what are they trying to say?

We first meet at their home and studio in east London, where there is a poster of David Cameron on the wall. ‘Nobody did a double-page spread of Theresa yet. We’ll probably change it for that,’ says Gilbert, who speaks with a noticeable Italian accent. He says that Theresa May actually ran away when they met at a party at The Ritz. ‘She was Home Secretary at the time. We shook hands and she just fled. I think she is very nervous of people.’ 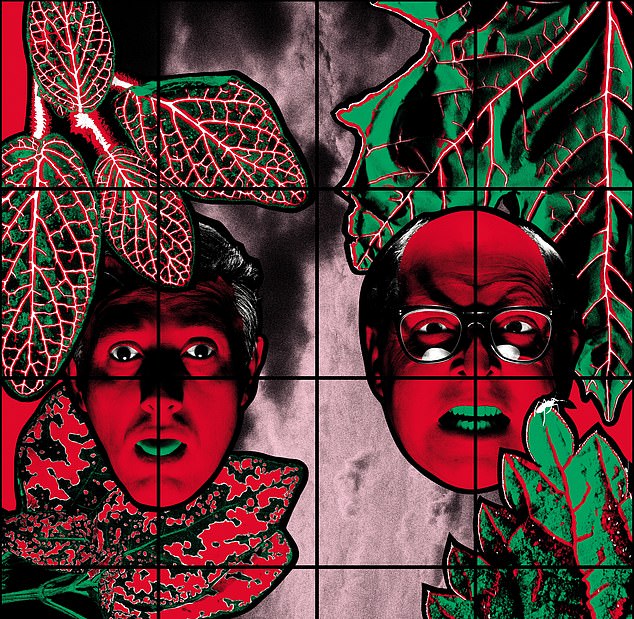 The pair were training as sculptors when they met at St Martin’s School of Art. George Passmore was 25 and Gilbert Prousch was 24. Each felt alienated from the other students. ‘All our contemporaries were trying to get a gallery and to become a professional artist. Some had mummy’s and daddy’s money. We were just country people,’ says George, who came from a relatively poor family in Devon. Gilbert had grown up in a village in the South Tyrol, also with little to his name.

Whose idea was it to merge their lives and work as a single artist? ‘Both of us, walking together through the streets of London,’ says Gilbert. ‘It just happened to us. We had to succeed. We had nothing else.’

They couldn’t get jobs or grants as a single artist, so they were bold. For The Singing Sculpture in 1970 they painted themselves to look like bronzes, put on the suits for the first time and danced on a table in a stilted way to Flanagan and Allen’s Underneath The Arches. All day, over and over again. We may be used to such ideas now but at the time it was a sensation and gave them a visual identity that led to fame, which they have used to promote their giant composite pictures ever since.

Gilbert & George said it was love at first sight (and they are said to have had a civil partnership a decade ago), so what part did being lovers play in their art? ‘We never think of it like that. We don’t think we fit into any particular mould,’ says George. ‘We never liked the term gay, for instance. Love has so many forms anyway.’ 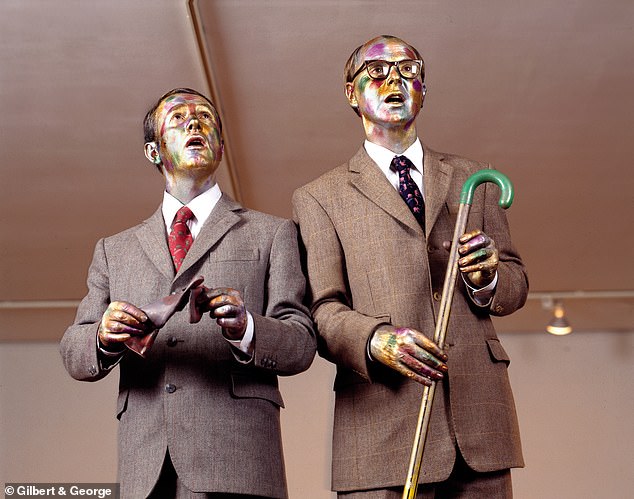 The Singing Sculpture, 1970. The artists were upset by not being invited to take part in a London art show in 1969, so dressed up as living sculptures and gatecrashed the event

They are happy in their own private world in east London, says Gilbert. ‘We don’t want people calling us. We don’t want to go out. We don’t have to talk to anybody. And that’s fantastic. There is one goal: to succeed in art. We never have to compromise because in some way we don’t have friends.’

That can’t be true, surely? ‘We have a very small group of mostly young friends that we love very much and trust. Just not friends out there in the profession.’

They work in their studio all day, while a personal assistant manages their affairs. The pair also walk the streets of east London photographing people unawares and collecting things, looking for inspiration. Do they ever go out alone?

‘As one person? I can’t think when,’ says George. ‘It wouldn’t work so well.’

What about popping to the shops? ‘We don’t go to the shops. We buy things a year at a time. Hundreds and hundreds of rolls of lavatory paper, toothpaste, soap, washing powder. We don’t want to do anything that we don’t need to do, like shopping or cooking.’

George says they have no kitchen in their home but eat at the same Turkish restaurant every night. ‘We order the same thing every night until we nearly vomit, then we change.’

Back in 1977 they made a piece called Rich and called that the dirtiest of the dirty words, but surely they are now rich themselves?

‘We’re giving everything away,’ declares George, describing the arts charity they have started on their own, so they can buy a local building and open it as a non-profit gallery and community space. ‘We managed to put together £5 million for the foundation and we have £4 or £5 million to do it up. We have a company and we pay ourselves a salary.’

THE POWER OF TWO

George qualifies that: ‘A modest salary. We’re comfortably off really. We don’t have money worries.’

They are staying at a charming old hotel in the heart of Arles, where Picasso used to stay. There’s a photograph of him on the wall.

‘We don’t want to see other people’s art,’ says Gilbert firmly. ‘We want to make art that is confronting life that is in front of us. We are vomiting on Picasso!’

Van Gogh also came here for the heat and the light, and there’s a cafe across the street with his name on it. George is unimpressed. ‘All the bars and the businesses signed a petition to get the man out of here because of his behaviour. It was unacceptable. None of the tourists who come here for Van Gogh would tolerate him if he moved in next door. They’d call the police.’

Their own approach is just as confrontational. Back at the gallery, they have pasted the windows with lists of phrases using the F-word, stating their own unique philosophy, F***-osophy. ‘Everyone says, “Oh, you want to shock.” No, we want to de-shock. To make it normal to use those words,’ says George. ‘Any words. Got it?’ Yes, and those words have become common currency in the modern world. ‘I think we’ve won.’

But looking through so many of their works in one place, I am struck by the revelation that we are living in a world Gilbert & George predicted and helped to create, on so many levels from silly to the serious.

You can’t walk anywhere these days without bumping into a living sculpture posing for tourists. G&G took selfies before that was even a word and made their life into art in the way the self-appointed stars of reality TV, Snapchat and Instagram would recognise. They exposed their bodies and used confrontational language long before flesh and f-words became common currency.

The images are always brilliantly executed. There is no question that what they do is art and it strikes to the heart of who we are and how we behave. No wonder they are popular with the people. But as they prepare to leave Arles, George says they are already thinking about what the next set of images will be. ‘We have the arrogance to believe that we have an idea what pictures are required by the world. Not the ones they want – the ones that are needed. The ones that will form our tomorrows.’