Girl, 7, survives being choked and thrown off bridge

A young girl in Massachusetts survived being choked and thrown off a bridge after being kidnapped from her grandparent’s home by a family friend, a court has heard.

Joshua Hubert, 35, denies taking the young girl – who is not being identified – from the home on Forestdale Road in Worcester and subjecting her to almost two hours of terror early Sunday morning.

But cops say the brave child identified him after swimming out of the 600ft-wide 85ft-deep lake and walking to a nearby home for help, Massachusetts Live reported.

A seven-year-old girl was thrown off a bridge – thought to be this one, which is on the I-290 – into Lake Quinsigamond in Massachusetts at 4:30am on Sunday, police allege 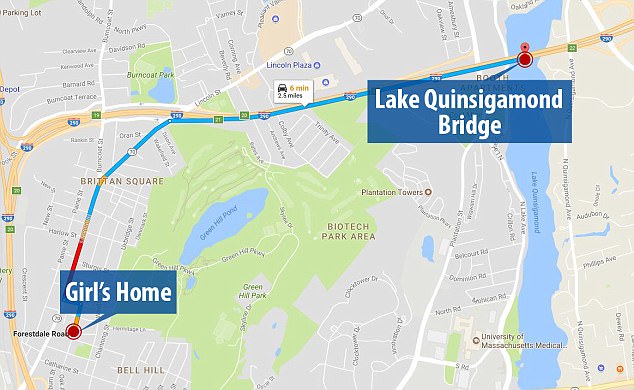 Cops say Joshua Herbert, a family friend, took the girl at 2:30am during a cookout at her grandparent’s home nearby, drove her for around an hour, choked her and tried to drown her

Cops say that Hubert was attending a cookout at the home when he snatched the girl, who was sleeping on a chair, at around 2:30am.

He then bundled her into his car and drove off into the night, they claim.

At one point he stopped the car and choked the girl before driving her across a bridge over Lake Quinsigamond and throwing her over, cops say.

But despite her young age, the brave girl survived her fall, and swam out of the lake.

She told police that she then located the first house with lights on and knocked on the door. That home was located in Shrewbury, across the lake from Worcester.

‘At approximately 4:30am, about two hours [after she was taken], a woman from Shrewsbury was awoken by knocks at her door and found the seven-year-old victim standing at her door in pajamas soaking wet,’ prosecutor Cheryl Riddle said.

The little girl then told police she had been kidnapped by Hubert, choked, and then thrown into Quinsigamond.

She had bruises on her body as well as marks on her neck and other injuries, prosecutors said.

The bridge over which the girl was allegedly thrown was not identified in Hubert’s arraignment on Monday.

Investigators believe that it was the Interstate 290 crossing, which spans the north end of the lake, based on where she emerged from the water.

The other crossing connecting Worcester with Shrewsbury, the Kenneth F. Burns Memorial Bridge, is 1.3 miles south of the I-290.

Hubert is now being held without bail until a dangerousness hearing, which is scheduled for Thursday.