Girl is raped and has her FACE cut off, leaving her mother to discover the body with just the skull

Girl, 17, is raped and has her FACE cut off, leaving her mother to discover the body with just the skull on one side of her head in the Philippines

A 17-year-old girl was found dead this morning after being raped and having skin peeled off from her face in the Philippines.

Christine Silawan, a grade nine student, had been on her way to church on Sunday afternoon but when she did not return home her mother Joan alerted the police to her daughter’s disappearance at 7pm.

This morning police found the teenager, whose face had been skinned, leaving just her skull, teeth, eyes and hair on one side of her head, dead in a vacant field in Barangay Bangkal, with her trousers and underwear removed.

She was last seen at 4pm with three men in Lapu-Lapu City in the Cebu province.

Christine Silawan, 17, was found dead this morning in a vacant field in Barangay Bangkal, Philippines

After locals in the area reported the girl’s body to the police, Christine’s mother was left to identify her daughter from her clothes.

Police Colonel Lemuel Obon, Lapu-Lapu City police director, said: ‘We have witnesses who said three men were seen with the victim. We are now tracing their whereabouts.’

Officers said that they suspected the teenager had been raped and are now waiting for the post-mortem examination results.

They believe the killers could have been high on illegal drugs or removed the girl’s face as part of a twisted ritual.

Colonel Obon added: ‘Police are investigating all motives about whether the young victim was the subject of an unprovoked attack and if the suspects were under the influence of drugs.

‘We have never seen such a brutal crime before. It could also be a ritual to remove the skin from the face. The mother of the girl identified her from her clothes.’ 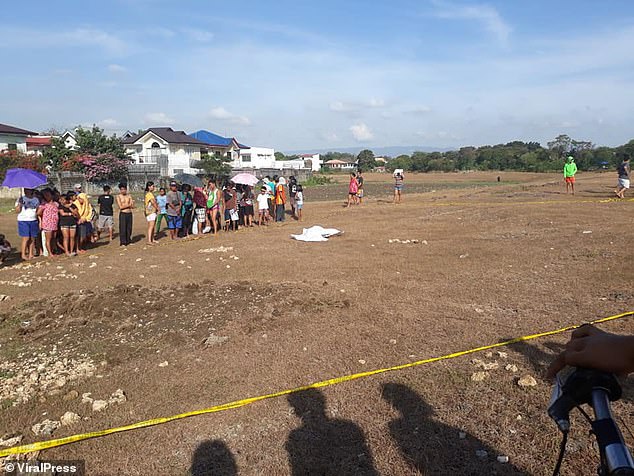 A police cordon is put up after the body of 17-year-old Christine Silawan is found in a field. The young girl had been waling to church and was last seen at 4pm with three men in Lapu-Lapu City

Haring Joseph said: ‘Rest in peace, my friend and my condolences to all of your family. May the police find whoever did this.’

Police are now hunting for the killers behind the horrific crime.