The ‘golden record’ NASA sent aboard its Voyager craft to help alien life understand humanity may just confuse them, researchers have warned.

The records include maps, images and charts along with 117 pictures, humpback whale sounds, greetings in 54 language, a  20-minute ‘sound essay’ of life on Earth, and 90 minutes of music.

However, Rebecca Orchard and Sheri Wells-Jensen at Bowling Green State University in Ohio say it could simply confuse alien lifeforms – and show them humanity likes to argue.

The Voyager probes launched into space with golden records (pictured) on board. Each record was etched with a map (top right) similar to those placed on the Pioneer craft

WHAT IS ON VOYAGER’S GOLDEN DISCS?

The Voyager message is carried by a phonograph record, a 12-inch gold-plated copper disk containing sounds and images selected to portray the diversity of life and culture on Earth.

The records include maps, images and charts along with 117 pictures, humpback whale sounds, greetings in 54 language, a 20-minute ‘sound essay’ of life on Earth, and 90 minutes of music.

‘The Golden Record is a beautiful artefact and representation of how humans want to see themselves, but it is meant to be received by and interpreted by something that has the sensory capabilities of the average human,’ Orchard told The Guardian before their talk at the at the National Space Society meeting in Los Angeles on Saturday.

‘If the second one of these senses is absent, or an entirely different sense is added, the Golden Record becomes a bit confusing.’

They say the inclusion of greetings in 54 languages could also be disastrous.

The barrage of greetings ‘pile up in a way that could be construed as arguing’, said Orchard, in a language that has ‘no grammatical congruity’ – and also assumes the lifeforms hear in exactly the same way we do.

They say trying to match the images with the audio, assuming they can work out how to listen to is, could also end badly. 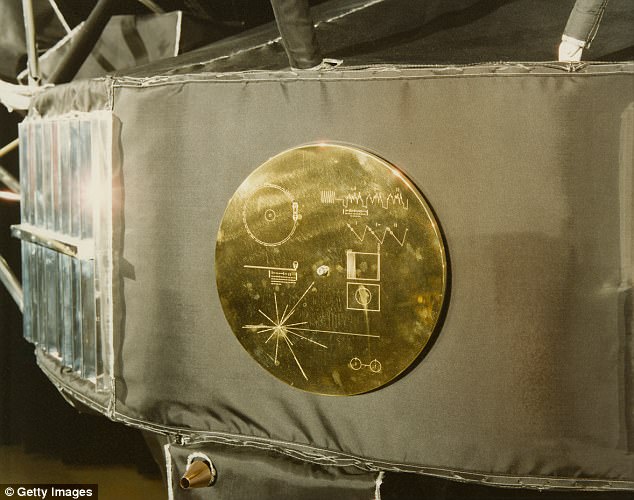 This image shows a gold record in its cover, attached to a Voyager space probe before launch in 1977. The records contain sounds from nature, such as volcanoes and thunder, as well as noises linked with humanity including a train and horse and cart

‘What if you pair the image of an open daffodil with the roar of a chainsaw?’ said Orchard.

However, she hoped the mere fact it was sent could bolster our reputation.

‘I would hope that the mere fact that we’ve endeavoured to send a record of humanity shows something about our humanity,’ she concluded.

However, experts say it may be some time before the messages are read. 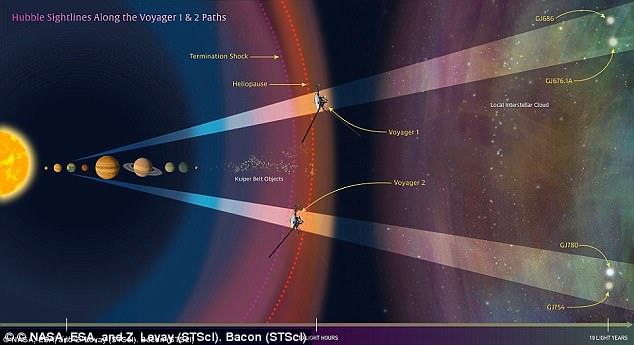 NASA’s Hubble Space Telescope map (pictured) of the paths of NASA’s Voyager 1 and 2 spacecraft as they journey through the solar system and into interstellar space. Hubble is gazing at two sight lines (the twin cone-shaped features) along each spacecraft’s path. The telescope’s goal is to help astronomers map interstellar structure along each spacecraft’s star-bound route. Each sight line stretches several light-years to nearby stars 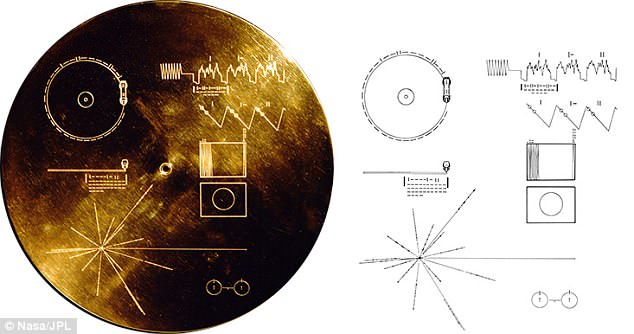 What the golden record shows: The Golden Record CoverIn the upper left-hand corner is an easily recognized drawing of the phonograph record and the stylus carried with it. The stylus is in the correct position to play the record from the beginning. Written around it in binary arithmetic is the correct time of one rotation of the record, 3.6 seconds, expressed in time units of 0,70 billionths of a second, the time period associated with a fundamental transition of the hydrogen atom. The drawing indicates that the record should be played from the outside in. Below this drawing is a side view of the record and stylus, with a binary number giving the time to play one side of the record – about an hour. The information in the upper right-hand portion of the cover is designed to show how pictures are to be constructed from the recorded signals. The top drawing shows the typical signal that occurs at the start of a picture. The picture is made from this signal, which traces the picture as a series of vertical lines

However, it will be 40,000 years before it comes close to another star system.

During their 40 years of operation, the Voyagers have set several records.

Many people were instrumental in the design, development and manufacturing of the golden record, NASA says.

Blank records were provided by the Pyral S.A. of Creteil, France. CBS Records contracted the JVC Cutting Center in Boulder, Colorado to cut the lacquer masters which were then sent to the James G. Lee Record Processing center in Gardena, California to cut and gold plate eight Voyager records. 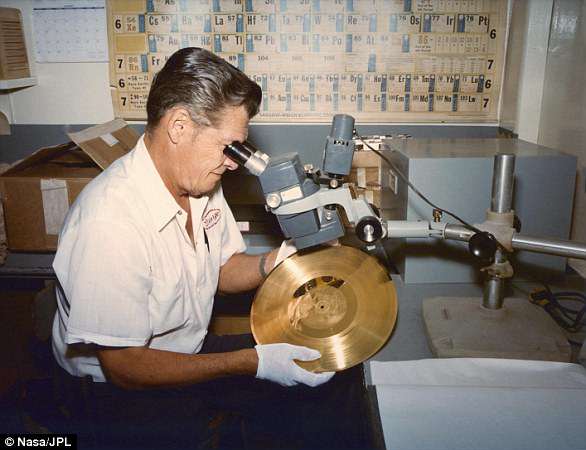 Gold plating took place on August 23, 1977; afterward, the records were mounted in aluminum containers and delivered to JPL.

The record is constructed of gold-plated copper and is 12 inches (30 cm) in diameter.

The record’s cover is aluminum and electroplated upon it is an ultra-pure sample of the isotope uranium-238. Uranium-238 has a half-life of 4.468 billion years.

The records also had the inscription “To the makers of music – all worlds, all times” hand-etched on its surface. 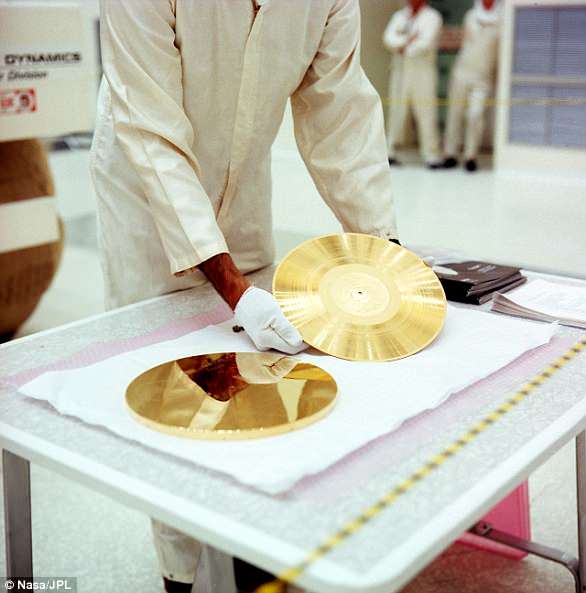 The record’s cover is aluminum and electroplated upon it is an ultra-pure sample of the isotope uranium-238. Uranium-238 has a half-life of 4.468 billion years

Their planetary encounters include the discovery of the first active volcanoes beyond Earth – on Jupiter’s moon Io – and the most Earth-like atmosphere in the solar system – on Saturn’s moon Titan.

The Golden Record was one of four attempts NASA made in the 1970s to send a message to alien lifeforms.

It sent maps revealing Earth’s location into space on board four craft, in the hope of communicating with aliens.

But Dr Frank Drake, who designed the maps, last year spoke out about the potentially ‘dangerous’ decision to send the charts over 40 years ago.

All four craft have now left the solar system and are speeding into deep space with Earth’s coordinates on board. 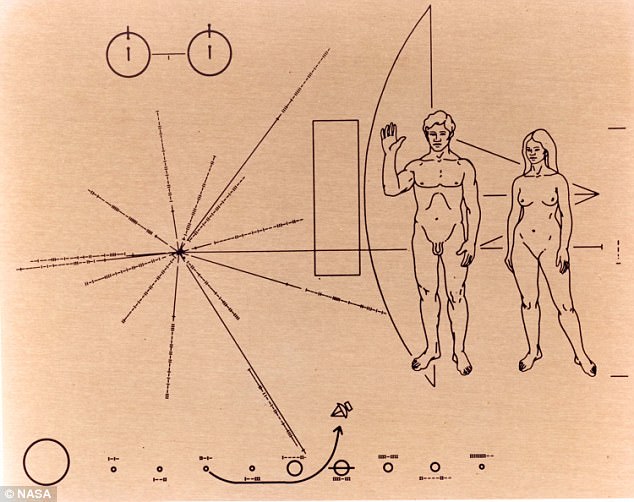 This image shows the diagram carried aboard Pioneer 10 and Pioneer 11, showing aliens how to find Earth. To the right are images of a man and a woman, while the star-like shape on the left pinpoints Earth (centre) relative to a number of pulsar stars (end of each point)

THE MAPS TO EARTH

Plaques placed inside the Pioneer craft show a man and a woman alongside a basic map of Earth which plots its position in relation to distant pulsar stars.

These star are long-lasting and bright so could still point aliens in the right direction if they are found millions of years from now.

The Voyager probes launched into space with golden records on board etched with similar pulsar maps to our planet.

The records contain sounds from nature, such as volcanoes and thunder, as well as noises linked with humanity including a train, horse and cart as well as a kiss between a mother and child.

And similar maps were placed on Nasa’s 1977 probes Voyager 1 and Voyager 2.

In a new interview, Dr Drake spoke about the maps he helped design.

‘In those days, all the people I dealt with were optimists, and they thought the ETs would be friendly,’ he told his daughter, Nadia Drake, who writes for National Geographic.

‘Nobody thought, even for a few seconds, about whether this might be a dangerous thing to do.’

Plaques placed inside the Pioneer craft show a man and a woman alongside a basic map of Earth which plots its position in relation to distant pulsar stars.

These stars are long-lasting and bright so could still point aliens in the right direction if they are found millions of years from now.

The Voyager probes launched into space with golden records on board etched with similar pulsar maps to our planet.

The goal was to put something on the Voyager that said where it came from, and how long it was travelling.

The records contain sounds from nature, such as volcanoes and thunder, as well as noises linked with humanity including a train, a horse and cart, and even a kiss between a mother and child. 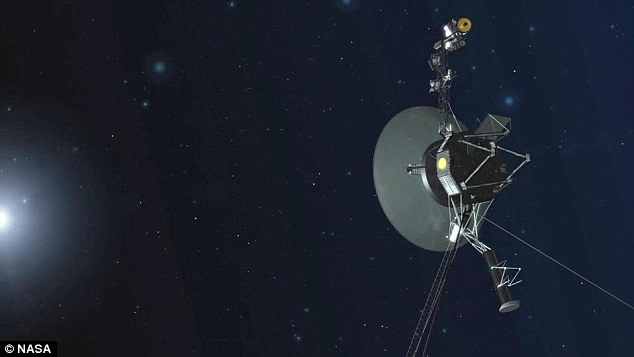 Despite the potential dangers the interstellar maps pose, Dr Drake said that the chances of aliens picking up the messages are ‘very small’.

He added: ‘The thing is going something like 10 kilometres [6.2 miles] per second, at which speed it takes – for the typical separation of stars – about half a million years to go from one star to another.’

The astronomer is not the first expert to warn of the risks of contacting aliens.

Renowned physicist Professor Stephen Hawking suggested last year that meeting beings from another planet could lead to humans being wiped out.

Hawking said it could be similar to when the Native Americans first encountered Christopher Columbus – and ‘that didn’t turn out so well’.

The physicist believes if aliens discovered Earth, they are likely to want to conquer and colonise our planet.