Good news for the baby of the family… you’ll live longer!

We all know the sibling stereotypes: the eldest has a head start in life, the middle child feels left out and the youngest is rebellious and impulsive.

But big brothers and sisters don’t always come out on top, research has revealed – most notably when it comes to our health.

According to a wealth of scientific studies, the ‘babies’ of the family are more likely to be slimmer, healthier and live longer than their elder brothers or sisters.

Here, we reveal the intriguing science that shows why your place in the family could be the secret to optimum health.

According to a wealth of scientific studies, the ‘babies’ of the family are more likely to be slimmer, healthier and live longer than their elder brothers or sisters (stock image)

Obesity will be responsible for 400,000 deaths in Britain over the next decade. Statistics show that being obese increases by 70 per cent the risk of heart failure – one of the leading causes of death in the UK.

Obesity, which affects more than a quarter of adults, has now overtaken smoking as the leading cause of four types of cancer.

Although overeating and a lack of exercise are obvious causes, birth order could play a role, too. A 2015 study in New Zealand tracked 13,400 pairs of sisters and found those born first were almost a third more likely to be overweight and 40 per cent more likely to be obese than their younger siblings.

On average, older sisters were 1 lb 4oz bigger. The same pattern has been found in men and the reason, scientists admit, is a mystery.

But Professor Sandra Black, a public health researcher at Columbia University, New York, believes the difference may be because in the first pregnancy, a mother’s blood vessels are narrower, reducing the supply of nutrients to a baby in the womb, making them store more fat.

In later pregnancies, blood vessels are more flexible so are inclined to stretch – increasing the flow of blood and nutrients to the baby. ‘Lower nutrient flow to first-borns in the womb may affect their body’s regulation of fat, causing them to store more fats in adulthood,’ says Prof Black. 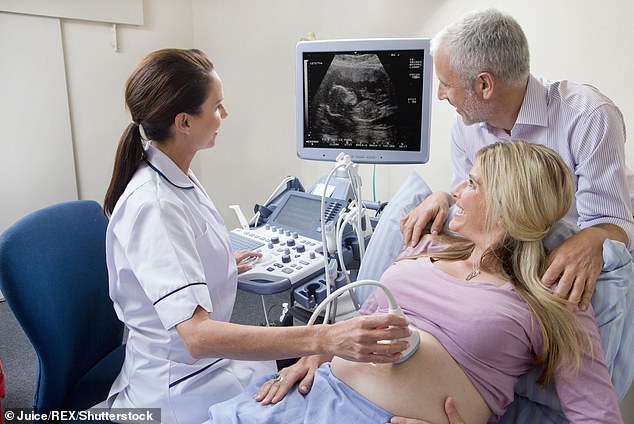 Professor Sandra Black, a public health researcher at Columbia University, New York, believes the difference may be because in the first pregnancy, a mother’s blood vessels are narrower, reducing the supply of nutrients to a baby in the womb, making them store more fat (stock image)

Type 2 diabetes, a condition where the body becomes unable to regulate blood sugar, is a modern epidemic, affecting more than three million Britons.

First-borns are more prone to diabetes, according to a study in New Zealand which found that older children’s bodies are less responsive to insulin, the hormone that helps muscle cells burn up sugar in the blood, keeping it stable.

Excess blood sugar is one of the hallmarks of type 2 diabetes and, left untreated, can increase the risk of heart attacks, stroke, blindness and amputations later in life.

Scientists think the poorer health of first-borns may be because they get a smaller amount of nutrients.

Professor Scott Montgomery, at University College London, says: ‘There are changes in the mother when she’s had previous pregnancies which could have implications for the development of the child.’

There may be only five years’ difference between Fiona Scott and her sister Ali Rellos but the gulf in health terms is enormous.

Fiona, 53, from Swindon, has suffered with high blood pressure since her early 20s. She also takes antidepressants to cope with the psychological effects of the menopause and is prone to colds and sniffles. Yet her younger sibling has rarely, if ever, suffered problems with her health.

‘I was diagnosed with high blood pressure at 24,’ says public-relations executive Fiona, who is married with three children.

‘I’ve been on pills ever since and will be for the rest of my life.

‘I have an annual check-up for the thickening of my heart muscles, which is common with this illness. I also need my liver checked because of the drugs I take.

‘Yet Ali is healthy – she’s never had any of my illnesses.’

Having a younger sibling is seriously bad for your blood pressure. Studies involving almost 400 young adults found that those with younger brothers and sisters had blood pressure readings up to six per cent higher than those with older siblings.

Scientists from the University of Massachusetts studied readings in 374 young adults and found little brothers increase readings by up to six per cent and little sisters by almost four per cent.

The reason why is fairly predictable – the arrival of a new sibling means having to compete for parental attention, adding to stress.

Feeling stressed leads to a surge in the hormone cortisol, which is shown to dramatically increase blood-pressure levels.

Older sisters were found to have especially high blood pressure. Scientists think this is because they take on more responsibility around the house, compared to boys, when a new brother or sister arrives.

Another 2017 study – the largest of its type – found that older siblings are seven per cent more likely to suffer high blood pressure at the age of 40.

However, Prof Black says sociological factors may be at play.

‘This may be related to the higher stress associated with certain occupations such as managerial positions, which we know first-borns are more likely to do.’

And findings published in Economics And Human Biology also showed that the effects on blood pressure tend to wear off as family members get older.

Ever wonder why you sometimes see yourself in your memories?

Memories are dynamic and can be changed.

Psychologists suggest people are more likely to ‘edit’ traumatic or emotional memories to remember them from a different point of view.

Research suggests this helps make the memory of the event – whether an embarrassing school performance or an injury – less vivid and the emotion associated with it easier to manage.

When this happens, it can feel as if you’re looking on as a bystander at something your younger self experienced.

But since you can’t watch yourself doing something, the memory is not completely accurate.

The ‘hygiene hypothesis’, where nervous first-time parents over-sterilise, could explain why younger siblings are much less at risk of allergies. First-borns are almost twice as likely to suffer allergic conjunctivitis, hay fever and food allergies than third children, and a third more likely than middle children. Some suggest older siblings pick up infections in school and bring them home, exposing younger siblings to germs at an earlier stage than they were. Prof Montgomery says: ‘This boosts younger children’s immune systems, making them less likely to develop allergy-type conditions.’

However, a 2008 study found that the difference in risk begins in the womb. Scientists studied the placenta blood of 1,200 newborns, all of varying birth order.

The blood of first-borns was found to contain significantly increased amounts of a genetic marker associated with allergies and asthma.

When researchers followed them up at ages four and ten and performed an allergy test, those with the genetic marker tested positive for allergies. This may partially explain the increasing prevalence of allergies in the Western world, as birth rates have declined.

EVEN THE RISK OF CANCER CAN VARY

Being the eldest can heighten your risk of various cancers, studies suggest.

Boys born as the family’s fourth or fifth child are 70 per cent less likely to develop a testicular tumour than the oldest boy.

Researchers who studied 200 testicular cancer cases and their siblings said a man’s risk of developing the disease may be determined while still in the womb, when first-born boys experience greater exposure to the hormone oestrogen than younger brothers. Oestrogen is thought to drive the reproduction of testicular cancer cells.