Google is allowing UK users to make phone calls to mobile numbers and landlines on its Home smart speakers, free of charge.

The latest update will be rolled out across the UK this week.

Users in the US have been able to make phone calls using the device since August last year.

Google Home users will soon be able to make phone calls to mobile numbers and landlines, free of charge. The latest update will be rolled out to customers across the UK later this week

To start a call users need to say, ‘Hey Google, call’, followed by the recipients name.

Google Assistant will be able to call any number in Google Contacts, as well as millions of businesses.

The AI can recognise the voice of up to six different users, and call the right contact based on that user’s address book.

When making the first call on a Home speaker, it will show up to the recipient as an unknown number.

After the initial call though, users can set up caller ID so their own mobile phone number will appear in all future calls.

Google Assistant has also been able to place calls on an Android smartphone via voice, but using the smartphone’s mobile phone contract rather than Google’s free calling service. 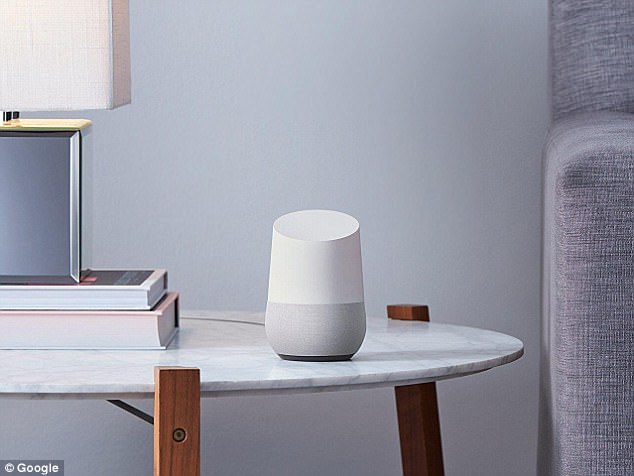 The hands-free voice calling feature also works for businesses as well as personal contacts. The feature only needs a Wi-Fi connection and can call mobile numbers and landlines

HOW DOES GOOGLE HOME CHOOSE ITS ANSWERS?

This update is the latest move in a battle to dominate the voice-controlled smart speaker market.

Last month Google announced its digital assistant software would be available in more than 30 languages by the end of 2018 as it steps up its artificial intelligence efforts against Amazon’s Alexa, Apple’s Siri and others.

Amazon’s Alexa has been able to make calls for several months, but only to a specific pre-installed app on a smartphone – not to phone numbers or landlines.

Apple HomePod is, at least for the time being, incapable of making voice calls.