A bizarre bug has hit Google Maps that has made swastikas appear at locations around the world.

The issue seems to be primarily affecting the Google Maps icons for hotels in Europe.

Reports of the bug began surfacing on Friday when users submitted complaints to Google via Twitter.

A bizarre bug has hit Google Maps that made swastikas appear at different locations for users around the world. The issue seems to be primarily affecting hotel icons in Europe

‘I opened my maps and was looking for hotels in the surrounding area, when I noticed the swastikas,’ a woman named Katie from Dublin, Ireland, told HuffPost.

‘I thought it was very strange so I took a screenshot. That’s when I tweeted Google maps questioning it.

‘I’ve since closed the app and reopened it and it’s back to normal with the bed. This is the only time I’ve ever noticed it,’ she added. 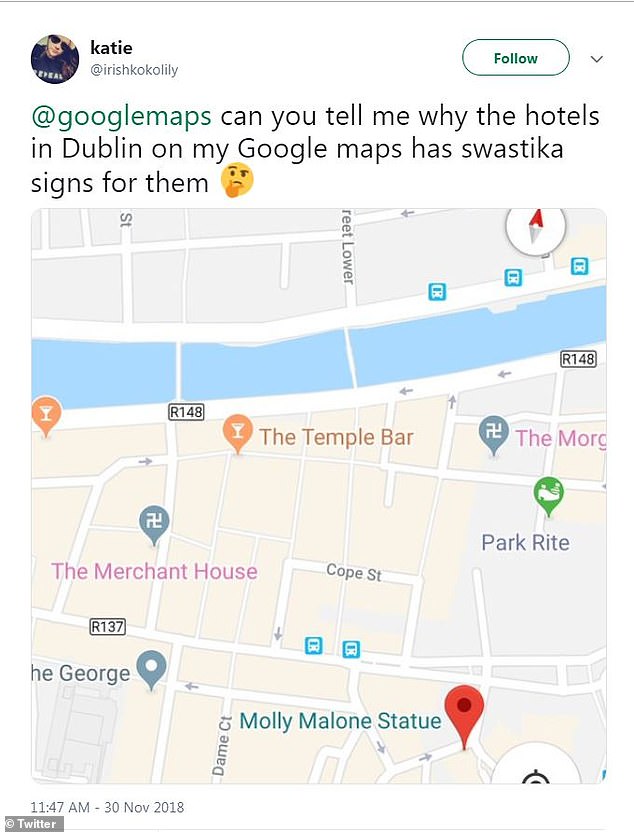 The woman from Dublin shared what the bug looked like in a series of accompanying tweets.

A screenshot shows two hotels in Dublin, one named The Merchant House and another called Kelly’s Hotel, that have the traditional bed icon replaced with what appears to be a swastika.

The swastika has become synonymous with Nazi Germany, racism and anti-Semitism.

But before the swastika was co-opted by the Nazis in the 1930s and, later, some far-right groups, it represented spirituality, well-being and even good luck in Buddhism, as well as many regions in Asia and Africa.

The reason stems from a feature in Google Maps that lets users view locations by ‘points of interest.’

Each type of point of interest has its own designated icon – for example, a dolphin icon designates an aquarium, while the ‘M’ icon represents a subway station.

As it turns out, what users believed to be a swastika icon actually isn’t one.

The icon is meant to represent Buddhist temples, particularly in places where the swastika is still viewed as a religious symbol. 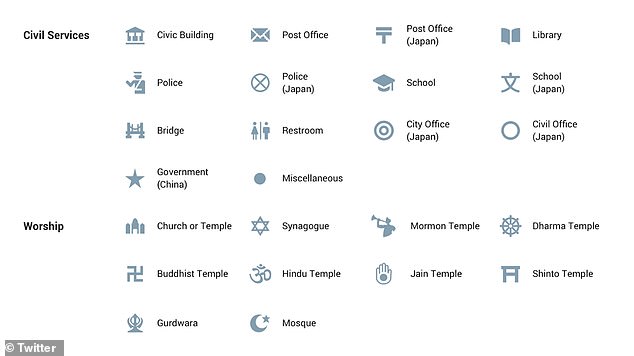 As it turns out, what users believed to be a swastika icon actually isn’t one. The icon is meant to represent Buddhist temples, in places where the swastika is still viewed as a religious symbol

Still, Google has confirmed that the Buddhist symbol isn’t supposed to be showing up as the icon for hotels.

‘This image is not a swastika, but a Buddhist symbol of worship,’ a Google spokesperson told Mashable.

‘We’re aware that these religious symbols are incorrectly displaying for certain hotels in Dublin and are working on a fix to restore the correct hotel icon to these places.’

HISTORY OF THE SWASTIKA: RELIGIOUS SYMBOL WHOSE MEANING WAS PERVERTED BY NAZI EVIL

While the symbol may now be associated with Nazis, it was in fact an ancient symbol used for more than 12,000 years to depict prosperity and power.

The swastika is an ancient symbol whose history stretched back for millennia before its meaning was perverted by Nazi ideology.

It is used to represent luck in Hinduism, Buddhism and Jainism, and takes its name – meaning ‘it is good’ from the Sanskrit language in which the Hindu religious texts were written.

Many Hindus traditionally painted the swastika symbol over their doors during festivals in order to welcome the gods inside.

As well as Asian religions, the swastika has been a popular decorative motif in Greek, Roman, Celtic and Byzantine art, making it one of the most common symbols in human history. 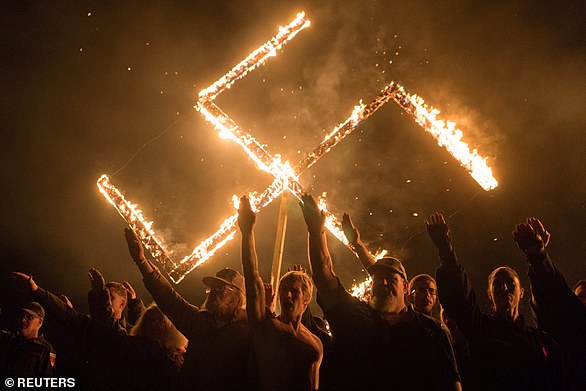 While the symbol may now be associated with Nazis, it was in fact an ancient symbol used for more than 12,000 years to depict prosperity and power

However, in 1920 Adolf Hitler declared that the swastika – tilted 45 degrees – should be the official logo of his nascent Nazi Party.

When he came to power, he replaced the German flag with a swastika in a white circle on a red background, making the emblem a feared symbol of his murderous regime.

After the Second World War the Nazi swastika was outlawed in Germany, Poland, Hungary and Lithuania, although it is still permitted in a religious or scholarly context.

The earliest known object with swastika-motifs is a bird made from mammoth tusk from the paleolithic settlement of Mezine, Ukraine dated to 10,000 BCE.