Britain may run out of flu jabs this winter because of Government ‘flip-flopping’ over who will be eligible, it was claimed today.

Officials originally planned to scale back the annual roll-out to only over-65s, despite warnings the ‘reckless’ move would leave millions vulnerable this winter.

But last week the Department of Health U-turned on its stance, paving the way for all over-50s to once again be offered free influenza vaccines.

Pharmacists fear the decision could impact supply by the time the programme kicks off in September, however.

They claimed that, as they were following March’s guidance, they have only ordered enough flu jabs to cover the over 65s and the vulnerable. It raises the prospect there could be shortages this autumn, if last minute orders are unsuccessful.

But Government officials insist jab manufacturers have confirmed enough jabs will be made available. 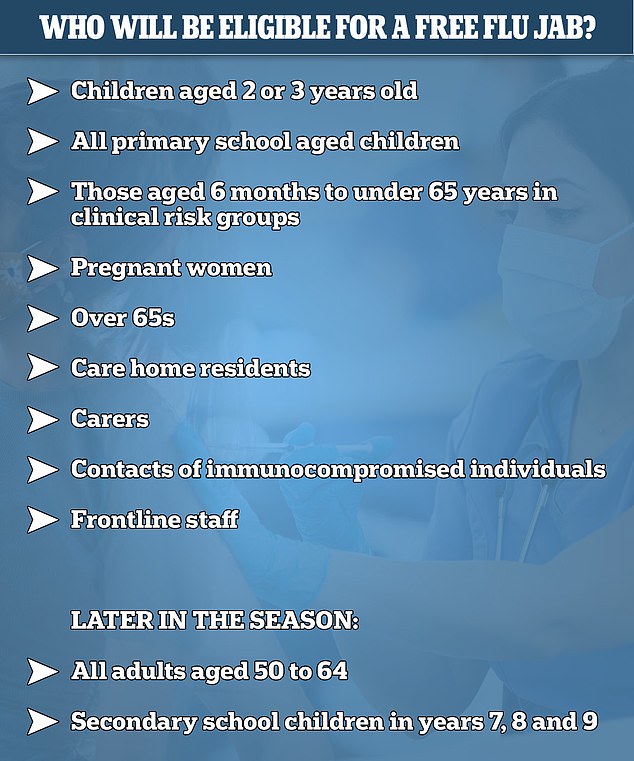 All over-50s in the UK will be offered a Covid booster and flu jab this autumn amid fears the NHS will be crippled by a surge of both viruses later in the year.

The decision marks a U-turn on the flu rollout after the Government originally planned to scale back the annual programme, despite warnings that it was ‘reckless’ and would leave millions vulnerable this winter.

Meanwhile, No10’s vaccine advisers initially only planned to give Covid top-up doses to over-65s and those at higher risk.

On Friday the Joint Committee on Vaccination and Immunisation (JCVI) said the expansion was to limit severe illness, hospitalisations and deaths due to both viruses this winter.

NHS and social care staff, along with five to 49-year-olds who are at-risk, will also be included in the Covid rollout — marking the fifth or even sixth Covid jab for the cohorts.

Outgoing Prime Minister Boris Johnson said the rollout will ‘keep our defences strong’ over autumn and winter and ensure ‘Covid can never haunt us in the same way again’.

As it stands officials plan to use Pfizer and Moderna vaccines again. But Moderna’s new Omicron-specific jab may be used, if it is approved in time.

One pharmacy source told The Telegraph that some flu jab makers will have already set their manufacturing capacity for this season.

They added that provision cant be ‘easily’ increased.

The current planning of the rollout will have pre-school and primary school children, over-65s and those in clinical risk groups be the first to get an invite.

Once they have been given the jab, all 50 to 64-year-olds and 11 to 15-year-olds will be offered the injection.

‘The latest volte-face by the Government means contractors need to undertake further work, potentially undoing what they did earlier in the year,’ he said.

‘This is not the way important public health policy should be handled; we hope lessons will be learnt to improve the quality of the policy development process in the future.’

NHS England guidance, published following news of the flu campaign flip-flop, said the timing of the vaccination for the 50-to-64-year-olds ‘will be announced in due course, but it is likely to be later in the flu season’.

This document also states that the Government has taken steps to ensure there will be enough flu jabs available.

‘The Department for Health and Social Care have confirmed with the manufacturers that additional vaccine for adult cohorts is being made available for local providers to access through their usual ordering processes,’ it reads.

Dr Preeti Shukla, clinical and prescribing policy lead for the union’s GP committee, said: ‘We have serious concerns that the lack of organisation with which this announcement has been made is going to cause severe problems for practices.

‘The late expansion of the flu vaccine programme, months after the annual flu letter went out to providers in March, will cause considerable difficulties as practices enter that crucial winter period.

‘Many practices will already have their flu programmes for the 22/23 season planned out and will need to reassess and potentially reorganise their vaccine supplies at a late stage to ensure that patients who need a vaccine can access one.’

She also slammed DHSC for essentially passing off the responsibility of sourcing the late extra jabs to GPs and pharmacists.

‘We would certainly have expected DHSC to have procured and supplied additional vaccines centrally, as in previous years when additional age cohorts were added to the flu vaccine programme late in the day,’ she said.

‘It’s especially disappointing that instead the burden and responsibility is being passed on to practices.

‘In a year when disruptions to supply chains of all kinds have played havoc with the global economy, it is ever more apparent what can go wrong when these basics are not sorted out.’ 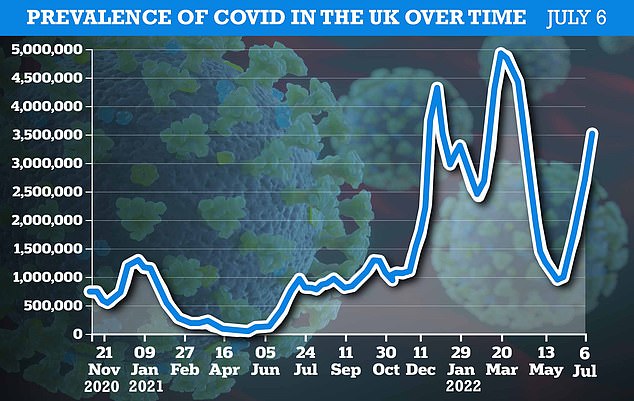 3.5MILLION Britons had Covid last week as cases rose by another THIRD with ‘no signs of slowing’

Covid cases continued to soar in Britain with more than one in 20 people infected on any given day — prompting people to cancel plans, stay home and wear masks again.

The Office for National Statistics’ (ONS) weekly infection survey estimated 3.5million Britons were carrying the virus in the week ending July 6 as cases roses nationally by around a third.

Sarah Crofts, chief analyst at the ONS, said infections ‘are showing no signs of decreasing’ and suggested they could reach pandemic highs this summer — which could throw public services into further chaos.

While the Government has promised not to reimpose restrictions unless the Covid surge turns deadly, Britons already appear to be tempering their behaviours in response to the rising statistics.

An exclusive poll for MailOnline today found three in 10 people have stayed at home to avoid Covid in the last month and 42 per cent have worn a face mask.

Almost half observed social distancing rules that have not been in place since February, while two-thirds said they had sanitised their hands. Just 16 per cent of people, around one in six, have not taken any precautions over the last month, according to the survey of 1,500 Britons by Redfield & Wilton Strategies.

DHSC did not respond to MailOnline asking what steps it had taken to ensure adequate flu vaccine supply.

Instead, a spokesperson said the decision to expand free flu jabs to to the 50-to-64-year-olds had been taken to ease pressure on the NHS this winter.

Later this year eligible Britons are expected to be offered both a Covid booster and a flu jab at the same appointment — with an injection in each arm — where possible, as was done last year.

Britons ineligible for a free flu vaccine, or unable to get one, will still be able to buy one from a pharmacy. Covid jabs won’t be be available privately yet.

The NHS hasn’t confirmed when and how eligible groups will be able to book their appointments for their Covid and flu jabs. Britons have been asked not to come forward until further information is announced.

Health chiefs are expecting a triple hit of Covid, flu and other respiratory viruses this winter.

They have warned that the UK will see a flu season at least as bad as pre-pandemic levels because lockdowns have weakened the public’s immunity against it.

They hope the dual rollout will work as an ‘insurance policy’ against both viruses, especially as there is expected to be more mixing indoors this winter compared to last year when the Omicron surge led to people cancelling get togethers.

Fears of a combined flu and Covid surge crippling the NHS led to health chiefs widening free flu jabs to the 50-to-64 age group in November 2020 and again in 2021.

Plans to scale back the free flu jabs to pre-pandemic levels came despite health agencies noting ‘there is likely to be a resurgence in influenza activity in winter 2022 to 2023 to levels similar to or higher than before the pandemic’.

At the time, one source working on the rollout said there were concerns the decisions appeared to be financially driven.

He said: ‘Given that the next pandemic might be caused by the influenza virus it seems extremely reckless to cut the flu vaccine programme.’

Predictions of a bad flu season in Britain have been fuelled by the fact Australia is currently being ravaged by its worst flu outbreak in years.

The Australian flu season, occurring in the southern hemisphere winter, April to October, is considered a canary in the coalmine for the UK’s.

Covid has also been predicted to surge at the same time as flu, with all over 50s as well as vulnerable Britons and health and social care workers to also be offered a booster jab this autumn.

It comes as surveillance data on Friday estimated that one in 20 people in the UK were infected on any given day in the previous week, with the resurgence prompting people to cancel plans, stay home and wear masks again.

Hospital numbers are also continuing to increase, driven by the spread of highly infectious Omicron subvariants BA.4 and BA.5.