Grand Theft Auto on the Gold Coast: Boy, 12, ‘flees stolen car’ just five weeks after he had to be revived with CPR after crashing another nicked vehicle

A 12-year-boy is in police custody after attempting to flee a stolen car, just weeks after being put in an induced coma when he crashed another vehicle.

Last month the young offender was given life-saving CPR after the Nissan X-Trail he was illegally driving clipped the back of a truck and hit a concrete barrier on December 7 in the Gold Coast.

The 12-year-old driver and a 14-year-old female passenger sitting in the front seat both sustained critical injuries to the chest, and the boy was put in an induced coma.

Three passengers between the ages of 12 and 14 were also rescued from the burning wreckage by shocked witnesses, including an off-duty police officer.

They suffered a variety of chest, facial and back injuries and were treated in hospital. 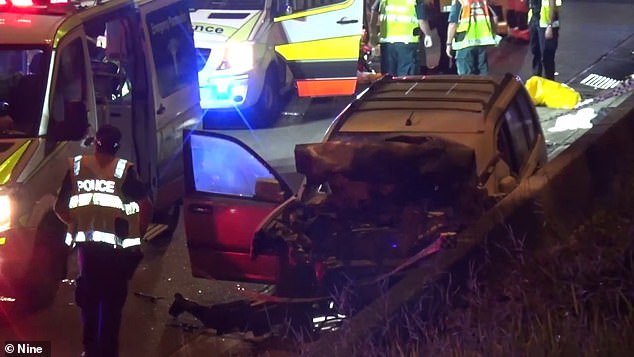 Five children between the ages of 12 and 14 were rescued from the burning wreckage by shocked witnesses, including an off-duty police officer (pictured is the scene)

Now just over a month later, the same alleged underage driver struck again and stole a car from a McDonald’s in Pimpama on January 19.

He drove southeast accompanied by three friends before police disabled the wheels with spikes and cut the joyride short.

The group fled into nearby bushland after abandoning the car on an off-ramp on the Bruce Highway, the Gold Coast Bulletin reports.

Police say the boy has not been charged over the Pimpama incident and investigations are ongoing.

He has been remanded in custody and will appear in court on February 14.